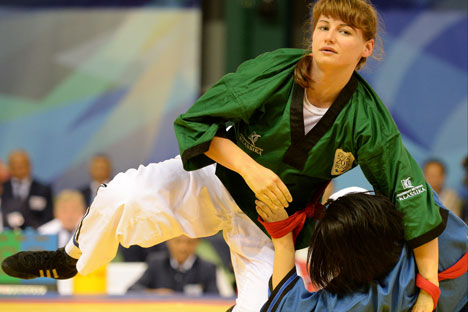 The champion of the Universiade in Kazan during the final. Source: Vladimir Baranov / RIA Novosti

How has a sport, only popular in the Russian republic of Chuvashia until a few years ago and virtually unknown in Moscow and abroad, managed to win the hearts of the Turkic nations and President Vladimir Putin?

On July 9 Russian athlete Serafima Safonova won the gold medal in the belt wrestling competition at the 27th Summer Universiade in Kazan, Tatarstan. Belt wrestling, also known as Köräş (kereshu in the Chuvash Republic), from the Turkish word for ‘rich’ or brave’, is not just a national style of wrestling in various republics of Russia, but has also become a trademark of the Turkic peoples located in Russia.

This year, for the first time ever, belt wrestling made it into the official programme of the Universiade, a major sporting event.

The sport requires a wrestler to wrap belts around the opponent’s waist and hands, whilst trying to throw the opponent off their feet. A throw is worth points if the athlete manages to tear both of the opponent’s feet away from the floor and throw them on their back. Rules can differ from region to region. The main difference consists in that the Chuvash and Kazakh kereshu styles involves active leg work, whereas the Tatar version has no leg locks.

INFOGRAPHICS: How to play the ancient Russian game of gorodki?

As any other wrestling variety, kereshu is a harsh sport. Wrestlers can get injured whilst performing throws - to the extent that coaches often argue that the most important thing for the sport is to learn how to fall. Elvir Karimov, who has practiced kereshu for years, explains: “We don’t fight, we wrestle in order to see who’s the fastest and who has the best technique. Also, we like feeling the adrenaline rush running through our blood.”

Wrestlers seem to hold a specific code of honour. In the words of Aleksandr Lesnikov, coach and 1st class referee, “kereshu wrestlers are calm, peaceful and fair people.” As for street fights, they prefer to avoid them. But if there’s no other option, “then your opponent will be lucky if he manages to walk away intact.”

No one knows for sure when kereshu originated. In the past people used to belt wrestle at weddings, fairs and big festivals. The Chuvash spring farming festival in Akatui was one example. Villagers – especially males – looked forward to the festival. Adults taught their children the tactics of the sport and took them to practice sessions.

Wrestlers traditionally performed barefoot and bare chested. It was believed that power could be drawn from the ground. Kereshu symbolized the clash between the forces of the light and darkness. This philosophy was also reflected in the wrestlers’ appearance. The first one to be called to the floor would wear a red belt, symbol of evil, while his opponent would sport a black belt to represent the forces of the light. The athletes would wear white trousers, embodiment of serenity and peace.

Wrestling regains its lost position as a key Olympic sport

The winner was presented with a ram and given the title of ‘Pattar’ (strongman). Losers would often travel to other villages to seek new fights.

In the early 1990s, wrestler Nikolai Petrov initiated the establishment of unified rules for kereshu. He also tried his best to promote the sport and engage young athletes. He travelled around schools, spoke about the rules of the sport and showed students specific moves to explain the strengths and weaknesses of the traditional wrestling discipline.

In 1995, the first kereshu tournament was held in the Chuvash Republic. Nineteen athletes competed for the title. In 2006, kereshu achieved recognition as the national Chuvash sport. The first Russian kereshu championship was held in Cheboksary on April 12, 2013.

In February 2013, President Vladimir Putin announced that Russia would seek the inclusion of kereshu and mas-wrestling (a Yakut variety of tug of war, which uses a stick instead of a rope) in the Olympic programme. The largest international event open to professional kereshu wrestlers to date is the Universiade.