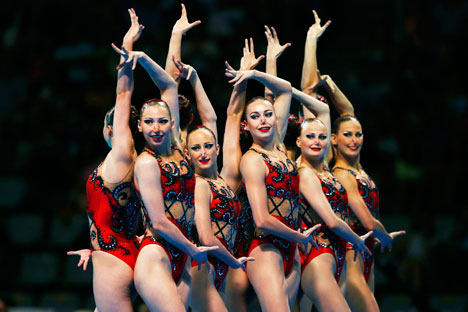 The Russian synchronized swimming team has again won all seven gold medals at the world championships, even with a weakened squad and without three-time Olympic champion Natalya Ishchenko.

Following the Russian synchronized swimmers’ seventh absolute victory in a row at the World Aquatics Championships, journalists at the press conference left the Russian women’s recent rivals—the Spanish swimmers—baffled. The reporters simply asked: “Do you know how to beat the Russian team?”

“We seem to train in the same way as them, 10 hours a day,” said the host team in reply, seeming a little embarrassed. “Maybe we need to make sure we never sleep at night and never get out of the water!”

The same idea occurred to Svetlana Kolesnichenko, who replaced the world’s number one synchronized swimmer—three-time Olympic champion and 16-time world champion Natalya Ishchenko—in the duet with Svetlana Romashina. Although Kolesnichenko was new to this type of program, she proved spirited and unafraid to call a spade a spade.

4.5 minutes—that’s how long Svetlana Romashina could hold her breath when she was a child.

“As for the results of the tournament, I was sure there wouldn’t be any surprises—even in the combination we decided to take part in at the last moment. We’re three heads higher than our rivals and we’re continuing to work. To be honest, I don’t see anyone getting close to us,” said Kolesnichenko. “Before a competition starts, you often hear about what super-programs the Chinese or the Spanish women have got, but you get there and realize that they still haven’t caught up with us.”

Svetlana, incidentally, is pleased that the team is maintaining its lead. “People who are a bit more adventurous want to experience intense emotions, as you do when diving. Here, no one knows who will win until the last moment. Even the unyielding Chinese make mistakes,” she said.

Why did Svetlana cite diving as her example? Simply put, synchronized swimmers always support divers, and vice versa. When journalists asked a natural question about how to gain such an advantage, Svetlana replied without thinking, listing the points in which Russian synchronized swimming is strong.

“The main secret to our victories is our excellent coaches: Tatyana Pokrovskaya and Tatyana Danchenko. We even have continuity of generations. Danchenko’s daughter, Lena Ternovskaya, is already helping her mom,” Kolesnichenko said. “And, of course, we have a good school of synchronized swimming. After the children’s and junior competitions, we have well-prepared athletes joining the team, junior world champions who continue to develop their technique.”

It might have seemed that the Russian women, who have not known defeat in four Olympic cycles, should have been big-headed and even somewhat relaxed. The performance gap between teams might have allowed this to happen—but no. They are constantly on the ball. They have been taught this by their chief coach, Tatyana Pokrovskaya, and by the solo and duet coach, Tatyana Danchenko. The favorites in any tournament never celebrate victory too early.

PHOTO OF THE DAY: Olympic mermaids

“I know that Tatyana Danchenko makes pancakes for the girls in honor of their victory,” said Kolesnichenko. “I don’t make pancakes, but I do give them a little champagne—although not until the tournament has ended. We don’t like to jump the gun. It’s a kind of superstition, a tradition. Usually we’re anxious and don’t relax until the very end. Of course, we congratulate each other on gold medals in the course of the tournament, but we don’t make a big fuss. After all, we still have several days of competition ahead of us.”

The champion Kolesnichenko does not mind talking about her mistakes. True, these are not so much real faults, as they are an endeavor for unlimited perfection. “During the group free program, the coaches and I were standing at the edge of the pool in a place where you can see all the mistakes and weak points—like being in the wings in a theatre. For example, we wanted them to do one lift a little bit better, a little bit higher—as they’d done in the training session—but they didn’t manage to. That’s the result of tiredness,” she said.

“All the same, it’s the second start in a row after the World Student Games, and our novices are flagging: They’re slim little things. They’ve never had to do such complex routines and lifts before, but they got through it. And I want to say that, in the final, the girls did everything much better than in the semifinal. Everyone noted this, and that was very important for me,” said Kolesnichenko.

Those “slim little things” are the five juniors who, after the London Olympics, were “looked after” by the four Olympic champions who remained on the team. Yet taking part in the world championships was such a “bang on the head” (to use the expression of coach Pokrovskaya) for the young and inexperienced girls, that they grew up right away.

The inimitable Natalya Ishchenko, three-time Olympic champion and 16-time world champion, has also retired. She was planning to compete in Barcelona in her favorite solo event, but she had to change her plans because of an expected addition to the family. Nevertheless, she was always alongside the girls.

During the preparation stage, Ishchenko was helping Romashina and Kolesnichenko put together their program and become a real duet. During the world championships, she called her friends in the team and supported them, helping them to get ready for the start. “It was incredibly difficult to perform in the solo after Ishchenko,” said Romashina, “and the last time I did a solo was at junior level nearly 10 years ago, in 2004. But it seems there was a soloist in me all those years, and today I proved that.”

That is the kind of turnover there is among Russian synchronized swimmers on the podium.

For the rock program, the Romashina–Kolesnichenko duet performed to the music of Metallica, appearing with mohawks on their heads, playing air guitar, making gestures with their fingers and sticking their tongues out like real rock chicks. Consequently, the pair added a lot of new men to their fan base. The men liked their choice of music and their striking imagery.