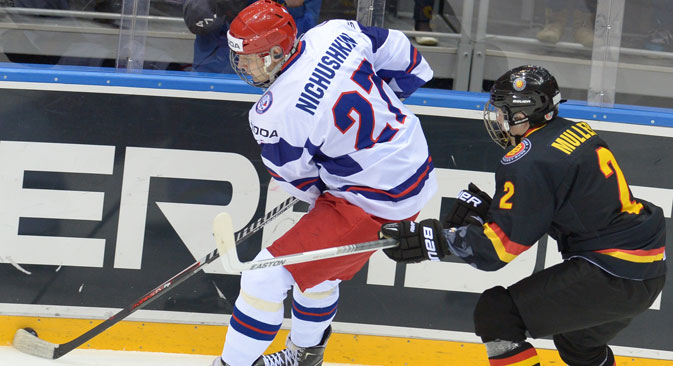 In the NHL pre-season, Valery Nichushkin, the Russian newcomer to the Dallas Stars, scored three goals for his new team.

Valery Nichushkin, the Russian newcomer on the Dallas Stars, is slowly getting accustomed to American hockey. The Russian hockey player scored three times for the Stars in four pre-season matches, which ended in Traverse City, Michigan.

Nichushkin started scoring goals for the club in the game against St. Louis, in which his team won 5:2. “He was incredible. In the first five shifts, we counted him five scoring chances. For such a young guy, he looked impressive,” said the general manager of Dallas, Jim Neill. In an interview with the club’s press service, he also said that, in his opinion, the Russian forward is ready to play at the North American league’s level.

"Nichushkin is a highly skilled and competitive hockey player who, in our opinion, was one of the most talented players in the NHL draft,” said Neill. “He spent the previous season playing against adult opponents in a very strong championship. We think Nichushkin is ready to play at the NHL level.”

Tom Gagliardi, the owner of the Dallas team, also liked the Russian forward’s play. “I’m impressed by Nichushkin—I would even say very much so. He gives his best in his play. This is an elite hockey player with a high level of skill. I think this guy can immediately start playing in the NHL,” said Gagliardi.

The 18-year-old forward was selected to be number 10 in the 2013 NHL Draft. On July 8, the Dallas management announced the signing of a standard three-year contract with the Russian player. The transaction’s financial terms were not disclosed.

In the 2012/2013 Kontinental Hockey League season, the 18-year-old Chelyabinsk Tractor player was recognized as the best newcomer in league. In 43 meetings of the regular season and playoffs, he scored 15 points (10 goals, plus five assists). Such dramatic results for Nichushkin gave rise to some media sources christening the young talent “the new Alexander Ovechkin.”

Americans doubted until the last minute whether the Russian should be chosen for the NHL Draft. “This is understandable. In all the interviews, the questions asked were not about what kind of person I am, but how I play. But most of all: "Are you going to go to the KHL?" I told all the teams that I would stay in the NHL. I think it is in our common interests—mine and Dallas’s. Why? Because I 'm not going anywhere. I'm fine here. I like America,” said Nichushkin.

Will Nabokov leave the NY Islanders for Russia?

Shortly before the draft, the athlete admitted that Dallas was his priority. "I would not be upset if I was chosen earlier,” said Valery. However, when left the meeting with the Dallas Stars, he said: "Of all the conversations I had with the teams, I liked the conversation with you the most."

“They talked a lot about what role they see me playing in the club. Nobody has done this! I even thought before going to bed: ‘It would be nice to be able to play with them.’ Even though I accepted the fact that Dallas could make an exchange. When I went to the Draft’s selection, I thought I would find myself somewhere in another place. The teams were passing by, the Stars were making a selection... I was ready for my name to be called! My joy was immense,” the Russian forward said.

As Nichushkin points out, Sergei Gonchar contributed to his transfer to Dallas. "It is good that he will be on my team. In the past, he did a great job with Evgeni Malkin; he was his mentor. In addition, he is from my hometown. It is going to be great,” said Nichushkin. “I am also going to run fast, give passes, score goals. I am not the one to assess someone’s strengths. I hope to become the leader. Now Dallas is my best club. I am very happy.”