Reflecting on 2012: A year in Moscow as the U.S. Ambassador 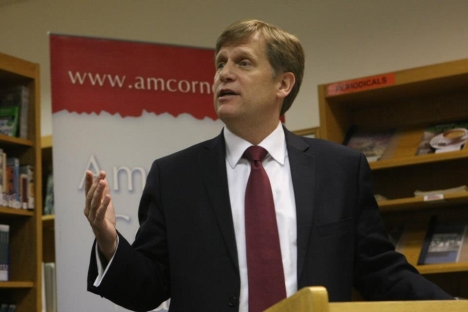 A year ago, I arrived in Moscow to represent my country as the U.S. Ambassador to the Russian Federation. This is a good moment to reflect on the state of U.S.-Russian relations and my role in developing our bilateral agenda.

Four years ago, President Obama and our entire administration sought to reset relations with Russia based on mutual respect and common interests. The day after President Obama’s first inauguration was my first working day as a U.S. government official, when I assumed my new job at the White House as Special Assistant to the President. Developing our new policy towards Russia was the central focus of my work.

Our new approach produced security and economic benefits for the American people. (We believe that the reset also produced tangible benefits for the Russian people, but that is for Russian citizens to assess, not me.)

Michael McFaul: The first 100 days in Moscow as an ambassador

We signed the New Start Treaty, expanded our cooperation on the Northern Distribution Network, deepened our cooperation on Iran, including the passage of UN Security Council Resolution 1929, and coordinated our efforts to discourage North Korea from further developing its ballistic missile and nuclear programs.

We also bolstered cooperation on non-proliferation of weapons of mass destruction, signed the 123 agreement fostering cooperation in civilian nuclear energy, and moved forward with a joint program in space.

We increased trade and investment between our two countries significantly, including cooperating closely on Russia’s accession into the World Trade Organization, and worked closely to bring together American and Russian societies, sending hundreds of athletes, cultural figures, civil society leaders, academics, and musicians to each of our countries.

In coming to Moscow a year ago, my instructions were to maintain momentum on many of these issues as well as pursue new areas of cooperation.

In 2012, we have continued collaboration in many areas of importance to American national interests. In dealing with Iran, Russia and the United States remain close partners in the P5+1.

With respect to North Korea, the United States and Russia joined other UN Security Council members to pass a Presidential Statement in April 2012 condemning the DPRK’s test of ballistic missile technology, and in January 2013 agreed on UNSCR 2087, which demonstrates to North Korea that there are consequences for its flagrant violation of its obligations under previous resolutions.

Last year, we also worked closely together in meeting the threats posed by extremists and criminal organizations in Afghanistan and the Central Asian region, and maintained close cooperation on the expansion of the Northern Distribution Network.

We also deepened our economic relationship in 2012. The United States lifted the application of the Jackson-Vanik amendment to Russia and granted the Russian Federation permanent normal trade relations (PNTR).

We still have disagreements with the Russian government regarding the implementation of Russia’s WTO commitments, but Russian membership in this organization provides a constructive multilateral setting for discussing these issues.

Trade and investment between our two countries in 2012 did not grow as fast as we would like. Nevertheless, initial numbers suggest U.S. exports to Russia in 2012 will have exceeded $10 billion for the first time ever.

During my time in Russia, I have tried to devote special attention to strengthening ties between our two countries regarding innovation.

In March in Silicon Valley, we kicked off the first U.S.-Russia Innovation Working Group under the auspices of the Bilateral Presidential Commission.

In October, Russian Deputy Prime Minister Surkov hosted U.S. Under Secretary for Economic Growth, Energy and the Environment Hormats for the group’s second meeting at the Hypercube in the Skolkovo Innovation Center, which included a visit to the famous science city of Dubna.

In 2012, we also sponsored trips to several U.S. innovation hot spots for two groups of Russians that focused on innovating within large corporations and fostering regional innovation.

And in early September we launched the Spaso Innovation Series – which even has an innovative format. Through this series, Americans and Russians discussed the link between innovation and jazz music, mused about life in the future including 3D printing and the concept of a “spare brain,” and considered the ramifications of increasing convergence between work and social life. I look forward to expanding and cultivating our innovation cooperation in 2013.

In 2012, the Bilateral Presidential Commission (BPC), which I helped establish in 2009, continued to facilitate areas of cooperation between our countries on a wide range of issues including protecting forests from illegal logging, anti-narcotics trafficking efforts, and building mutual understanding between our militaries.

To get a sense of the breadth and depth of cooperation you can read the latest joint report of the Bilateral Presidential Commission and the Commission’s newsletters. For 2013, we hope to increase cooperation through the BPC, and in particular give greater attention to promoting trade and investment.

2012 was also a fantastic year for cultural cooperation. We concluded the “American Seasons in Russia” program, which presented audiences across Russia with some of the best in contemporary American performing arts, including the world-renowned Chicago Symphony Orchestra and jazz great Herbie Hancock.

We brought to Russia a wide sampling of American music, including western swing, Cajun, Gospel, rhythm and blues, and opera. Attending these events was one of the highlights of my ambassadorial career. You can see videos of some of my favorite events here. I love this part of the job, as connections made between Russians and Americans through culture are the strongest and most sincere of all. I hope we do much, much more in 2013.

I made promoting people-to-people exchanges a focus of my first year in Moscow. Russian swimmers and basketball players who spent time training and touring in the U.S. came back to share their experiences with us. I welcomed young American and Russian hockey players to the Embassy, where we all had the chance to rub elbows with hockey greats Vladislav Tretiak and Alexander Ovechkin.

I hosted NBA representatives at Spaso House (we average 1,000 guests a month there) as part of the “Basketball Without Borders” program, which unites through sports athletes, coaches and fans from different nations and social backgrounds.

I was particularly honored to host our election night party, Veterans’ Day event and inauguration day party (which coincided with Martin Luther King Day this year), where more than 500 people joined me to watch a very special day in American history.

Talks at the American Corners in Vladivostok and Yekaterinburg, a lively debate at the Harvard Club, and a presentation on Martin Luther King at the American Center in Moscow were wonderful opportunities to engage directly with Russians and from which I learned a lot.

In 2013, I want to see more academic exchanges between our two countries, and hope we can conclude a new Fulbright agreement with the Russian government this year to strengthen our academic ties.

As we continued to cooperate on many security, economic, and cultural issues in 2012, we failed to make progress in some other areas.

Regarding Syria, Russian and American officials, including myself, consulted numerous times in the search for a formula to bring about a peaceful end to the crisis, and yet the bloodshed there continues.

We hope that 2013 will be the year in which we reach agreement with Russia and the international community on a way forward in Syria that will end the violence and start a political transition, consistent with the aspirations of the Syrian people along with the principles we agreed upon in Geneva at the Action Group for Syria, chaired by the Joint Special Envoy of the United Nations and the League of Arab States to Syria.

A series of new Russian government decisions and laws as well as an uptick in anti-American themes in the mass media made 2012 a more challenging time to develop a more positive agenda of cooperation between Russian and American societies. At the demand of the Russian government, we closed down the operations of the U.S. Agency for International Development (USAID) in September 2012.

We did so with real regret since we know that USAID’s numerous projects benefitted the health and welfare of at-risk Russian citizens, the growth of economic independence for many individuals and families, and citizens’ awareness of their rights and responsibilities in civil society.

After negotiating for nearly two years a new adoptions agreement, which went into effect on November 1, 2012, we were surprised and deeply disappointed that the Russian government soon thereafter abrogated the agreement and the Russian parliament passed a new law banning Americans from adopting Russian orphans.

Nonetheless, the Obama administration will continue to engage with the Russian government, be it to expand our successes or manage our differences. It is the job of the diplomat to prevent disagreements based on misconceptions and misinformation. I am honored to recommit to this mission after President Obama’s reelection.

In parallel to my engagement with Russian government officials, I will continue to engage with Russian society as I did during my first year in Russia. As I promised to do when I first arrived, I have made providing more accurate information about the United States to the Russian people a top priority for me and my Mission.

To help accomplish this task, I have given numerous interviews to Russian newspapers, radios, and television: You can view some of them here, here, and here. But since arriving in Moscow, I also have experimented with some new methods of communication, including opening a Twitter account, @McFaul, which now has more than 41,000 followers, interacting with my 9,000 “friends” on Facebook, and keeping an active Livejournal blog.

One Russian media research company ranked me as the 10th most quoted blogger in Russia!

Although it is sometimes hard to communicate in proper diplomatic language in 140 characters, and my spelling in Russian still needs improvement, I find interaction on these social media platforms an excellent way to connect directly with Russians from all over this vast country.

I cannot tell you exactly what I did in 1997 or 1999 or 2003, but my family and I will always remember 2012! I learned a tremendous amount about diplomacy, Russia, and Russians.

My family also has learned a great deal. Russia as a country, Moscow as a city, and Russians as a people have always been fascinating to me. I am thrilled that my family has been able to share these experiences with me. And unlike me, when I first came here in 1983 and lived in a small one-room dorm with a roommate, they all get to experience their first time living in Russia from the perch of Spaso House!

We are deeply grateful for the unforgettable experiences of 2012, and are just as excited to seek out new adventures in 2013.