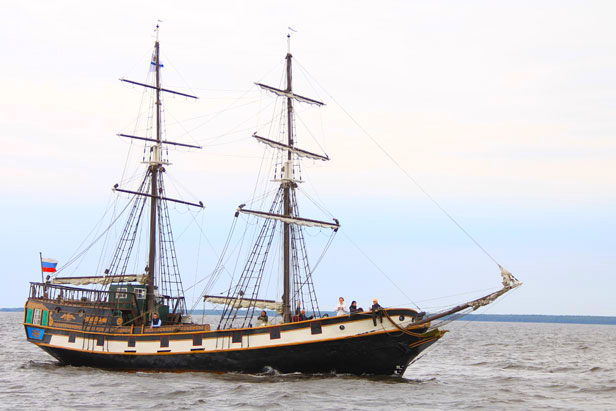 Cruise in company is a voyage for socializing, relaxing, and sharing experience. The yachts set off from St Petersburg along the inland waterways of Russia. During the cruise, the yachtsmen can enjoy the scenery of the Svir river, the Ladoga and Onega lakes, and the White Sea.

Strictly North is the most northerly race in the world and only for lovers of extreme sports not afraid of hardship: 2000 miles of white Arctic silence. These lands, home to centuries-old icebergs and the harsh waters of the Arctic Ocean, are rarely trod by human foot.

A total of 13 crews are set to take part in AR80-2013, from seven countries: Russia, Norway, Sweden, Poland, Finland, the Netherlands, and Malta. The flagship vessel is traditionally the legendary yacht Peter I, holder of several world records and renowned for circumnavigating the globe in 2010 via the Arctic in a single voyage without the assistance of icebreakers.

This year, the participants in the race have set themselves an unusual task: to bring a piece of Arctic iceberg back to the mainland. Back in the 19th century, Arctic explorers brought tons of ice to northern California and Hawaii. Today's seafarers sometimes try to emulate their heroic forebears. They want everyone to have the opportunity to see a real iceberg with their own eyes, regardless of whether or not they have crossed the 80th parallel.

Daniel Gavrilov, main organizer of the regatta and captain of Peter I: "In 2013, we assembled a record sailing fleet, not only for the cruise but the Arctic stage, too. The event promises to be full of thrills and beauty. People back on shore are already looking forward to glimpsing our iceberg. Just imagine: the summer heat of July, yet there is real ice on its way from the North Pole. Now we are preparing for the regatta, and everyone is invited to the opening ceremony on June 14 in St Petersburg."

For foreign yachtsmen, AR80 is the only way to see the beauty of the Russian Far North and the Arctic. Travelers to these parts get to see real icebergs and giant glaciers, become acquainted with the living habits of wild animals, have the chance to view close-up walrus rookeries and bird colonies, and set eyes upon one of the wonders of our planet: the spherulites on Champa Island.

Another objective of AR80 is to draw the world's attention to environmental issues in the Arctic. This will be the third time that the crews in the Arctic race will do what they can to remove debris and clear up the Russian Arctic zone.