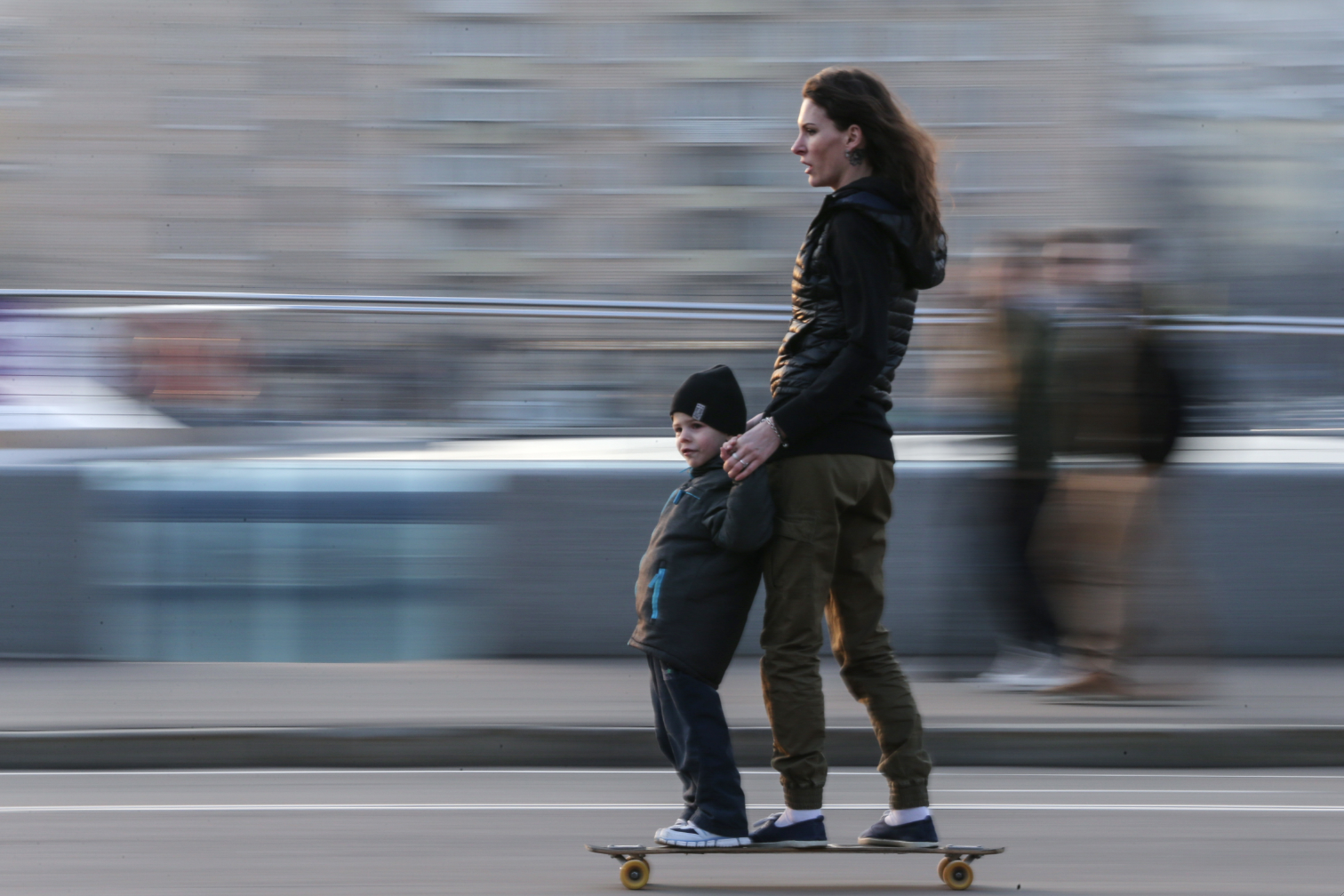 A woman and a kid skateboarding on Pushkinskaya Embankment in Moscow.

Sergei Savostyanov/TASS
An Indian woman in Moscow writes that, with the advent of spring, she is getting nostalgic about home, and also why Russia just “feels” more educated than India.

There is a saying, ‘don’t call it spring unless you can step on nine daisies’.

Well, in Russia, spring is more than just sunshine, flowers, hibernating bears waking up and migrating birds returning home. It’s a state of mind! There is still some snow lying about and the temperature gauge is still in the negative, with sharp chilly winds. But in my heart, it is already spring.

Food shows on local television networks are featuring special ‘spring’ recipes. I noticed huge billboards saying ‘Vesna’, the Russian word for spring. Perhaps they may be advertising something, but looking through my ‘spring coloured’ glasses, I noticed only the bright lettering against a white snowy backdrop. Friends send “Good morning” messages almost invariably with the word spring somewhere in them. Like “Hey, Good morning, may the spring sun warm your heart all day.”

Afflicted with the same spring madness, one of my Russian friends took me yesterday to a gorgeous up market shopping mall all the way across the city. As it turned out, inside the mall, surrounded by Chanel, Miumiu and the like, there is spring all year round. It was like a huge temperature- controlled greenhouse with huge lush palms and crotons growing indoors, a small swimming pool with synchronised swimming shows to entertain the buyers strutting about in their fancy minks. The stunning tropical flora and the hidden gurgling brook had me thinking I was in our orchards in Kerala. My friend and I took a small stroll in this ‘spring’, and had an early truffle dinner before proceeding to a very colourful evening concert of Russian folk dances in a “goodbye winter” spirit.

Yes, Russia is fancy. Immaculately dressed women, sophisticated men, mostly well behaved children, flashy cars, spectacular churches, wide streets, and winter golf, where a helicopter is at your disposal to take you from one hole to the next; Everything about Russia is fancy.

However, Russia is just as “educated” as it is flashy. It is punishable to not send a child to school. All children must complete school and acquire at least blue collar professional competence. Every area has a government school to which your child must go, thereby cutting down on school bus traffic. To get a child enrolled in some other government school half way across town involves a lot of ‘arranged’ paperwork, which by itself is a deterrent.

I remember last spring when a friend, whose son was then in nursery school, attended a parental spring cleaning event at school. At least one parent was obligated to attend the event and help wash windows to let in the March sunlight. She wasn’t quite thrilled about having to “waste” a Saturday, but agreed that the practice does promote bonding, involvement and gets you to make friends with parents of your child’s playmates.

Another school to which I was invited as a special guest on their International day deeply impressed me. It was one of the fancier private schools. One would perhaps have to rob a small bank to send a child there. There were a little over a dozen students in each classroom, with two teachers to each classroom; a class teacher and an assistant teacher. I, too, went to a rather fancy private school back home in India. But there were about 50 students to a class. I will never forget the bond that the assistant teacher, a young, gentle, bubbly “Miss Tanya” and the students shared. She knew the background of each student and their behaviour patterns; the students, all between six and eight years of age, hugged her, and shared their problems with her. During break time, the students were taken out to ‘play’, where they engaged in active learning by making large drawings with chalk on the asphalt – to scale. There is so much more to tell that it will take up an entire chapter in a book, which someday I may perhaps write.

My home is the venue of frequent gatherings of Russian friends. We sit together over endless cups of late evening tea and talk about love, life, literature and politics, sometimes well into the morning. Sometimes, we play board games, at other times a Russian version of “Antakshari”. While in India we sing songs beginning with a given letter of the alphabet, my Russian friends here recite poems. Their vast repertoire of poetry renders me spellbound.

It is equally amazing just how much they know about the world. I remember cribbing about how difficult it was to pronounce some Russian names, when my erudite college-mate and friend piped up, “Hindi isn’t easy either. You have names like ‘Dhritrashtra.’” Apparently, as part of the school programme, they were made to read about religious texts of the world and the names from the Mahabharata were still fresh in his mind.

When I say Russia is educated, I don’t just mean formal education. I mean civilized behaviour. Public toilets are clean. I actually saw a woman wipe the washbasin and mirror after her in a cafe toilet. The Russians respect public spaces and never litter, well, at least in big cities. Their children don’t run about pretending that the granite floor of the restaurant is exclusively meant for their sliding pleasure as they are wont to do in India. The Russians almost never break queues (more on this in my next letter); they offer their seat to older people in the metro, and very rarely does one find them talking so loudly on phone, that the sound permeates the personal space of those around them.

Russian homes frequently have a musical instrument, usually an upright piano, or a very pleasant sounding Russian string instrument, the ‘balalaika’, or the accordian. It is usual for at least one of the family members to know how to play a musical instrument. Art and culture occupies a sizeable portion of a Russian’s life.

Yes, Russia is all this and more. Like its traditional nesting doll, the ‘Matryoshka’, Russia has layer within layer of soulful beauty waiting to be uncovered.

Our very own spring festival, ‘Holi’ is just around the corner. I am planning to make ‘gunjiyas’– a fried flour dumpling with a sweet filling - my favourite Indian sweetmeat. While Moscow does not leave me much time to miss home, festival time is a time of melancholic reflection. I am thinking of how you love splashing coloured water on friends and drenching everyone in colour, and how you would’ve excitedly made ‘thandai’ (a drink with almonds) laced with ‘bhaang’ (opium seeds) to get everybody ‘high’ in true Holi tradition. I’m thinking of how the atmosphere back home will be, filled with shouts of “Holi hai” (It’s Holi) and loud music. I am missing the colourful, fragrant air of festivity, and…you.

PS: I would love to hear back from you. Mail me at Indiangirlmoscow@mail.ru.