Of cues on queues of the Russian kind 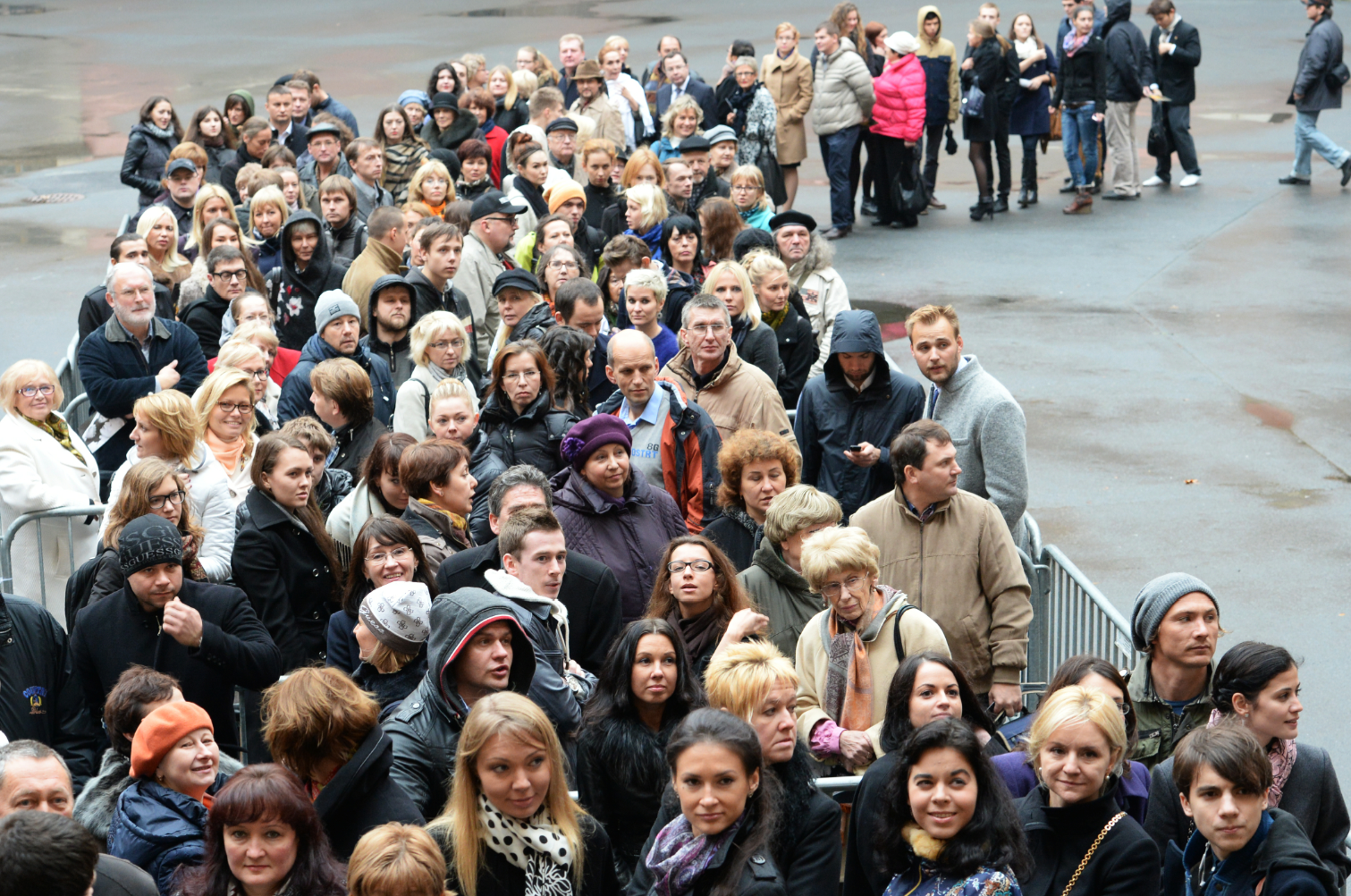 Russian queues are sacred and the sanctity of the queue is highly valued.

Alexei Danichev/RIA Novosti
An Indian woman in Moscow writes home about fascinating aspects of life in the Russian capital.

I am writing after another whirlwind Moscow Sunday.  My weekends are so activity filled that sometimes I long for the quieter weekdays to calm the nerves. It was relatively warm on Sunday at about 3 degrees, despite the strong winds. Well, blame it on the spring fervour but today was a crazy day with crazy traffic. I spent almost two hours driving around, looking for a free parking spot around the Bolshoi theatre, only to draw blanks.

The Moscow city centre was packed with people flashing their freshly washed cars. Most middle income people who can’t afford a garage for the winter, usually don’t use their cars everyday in the winters as it takes time and effort to clean the snow off each time, not to mention the rush hour traffic jams which are so characteristic of central Moscow. The metro offers a brilliant alternative for weekday commutes, so many cars are brought out only for weekend gallivanting.

My very dear Russian ‘weekend’ friend and self proclaimed cultural ambassador, philosopher and guide decided to drive me to the city centre in his fancy car. We waited to enter paid underground parking in a long queue with shiny Maserettis, S–class Mercedes and other flashy cars; all self driven as far as I could tell. We must’ve waited about forty-five minutes in an almost stationary queue before getting to the entrance where bright electronic lettering audaciously stared back at us announcing that only two free parking slots remained, while there were five cars ahead of us.

Exasperated, many cars drove away, but not a single car, not one, honked all this while. I imagine a similar scenario in India where cars would’ve honked themselves hoarse, while we in Moscow just sat patiently listening to Tchaikovsky’s “pas de deux” played over on the Harman Kardon in the tastefully appointed salon.

Talking about queues, let me tell you that queues are an integral and highly regimentalised part of the Russian life. And as with everything Russian, there is nothing ordinary about their queues. The queues are disciplined. I remember during Victory day celebrations a few years ago, at Park Pobedi, someone tried to break a queue to a public toilet. The queue was a long one, but such ‘offenders’ are taken to task by the public, and the poor fellow was beaten up for breaking the queue. A reminder of the Soviet mentality perhaps, where social order was highly valued and any deviation was dealt with an iron hand. The exception to this rule can be a woman with a small baby, who is usually courteously allowed to jump queues to toilets and even at cash checkouts in shops.

Russian queues are sacred and the sanctity of the queue is highly valued. At the same time, it differs from the more disciplined western world queues by the easy camaraderie shared between people standing next to each other and the apparent physical absence of a queue.

“Physically absent queue?” Now, you may well ask, how does that work?

My first, unforgettable brush with this type of a queue was in Saint Petersburg outside the Hermitage museum. Museums and theatres in Russia often have long queues, even longer than the ones we had in movie halls in India before the advent of the multiplex. We reached the Hermitage at about 7:30 in the morning to secure our place in the queue. There were already eight people smoking, chatting, sitting scattered in front of the museum but there was no one in queue. We stood there, glad to be the first in queue and wondered why others did not want to take their place even though they had reached before us. Slowly the square in front of the Hermitage began to fill. Soon there were hundreds of people. Surprisingly all scattered. And I shuddered at the thought of the mad scramble that would ensue to form a queue when the ticket window opened. I had however, missed a small detail– each time a new person joined the crowd, they would ask aloud, “Kto posledny” which is Russian for “who is last?” Someone would say “Ya” meaning “I” and the others would nod and they would look at each other. To my utter astonishment, at 9:00 am, when the gates opened, within minutes a clean orderly queue was formed with eight people ahead of us, even though we were trying to be first.

This is how Russian queues work; each time a new person comes, he asks who is last, tells the “last” person he is now behind him, waits for another person to come who takes on this “baton” of being last. People just memorise the face of who is in front of them and behind them when the queue forms. While waiting, they can physically leave to smoke or run some errands. So when you see three people standing in a queue, there could actually be 25 people in the queue ahead of you who are utilising their time for something else instead of just standing in a queue! I have not experienced this anywhere else in the world. It is something that frequently put me in embarrassing spots before I figured out the dynamics and learnt to appreciate the sheer brilliance of the system.

In Moscow now this traditional queue is being replaced by the electronic token queue, even in banks and chemist shops. But true to their blood Russians still take the token and leave the premises making a fairly accurate guess, in some magical way, when to return in time.

Another typical thing about the Russian queue is “the list.” This is especially true for student quota ticket queues outside theatres. Someone self appoints themselves as the list maker and begins to write down the names of people in the queue in sequence. Once you have a number, you are free to go get a quick bite before the ticket window opens. There are unscrupulous street- smart ways to get your name up to number 25 when you may actually be 125, a trick I shall not reveal here, for its skillful execution was demonstrated to me in strict confidence by one of my sweet Russian friends.

The queues in Soviet Russia were even longer. My ‘Rooski drook’ (friend), reminiscing about his Soviet adolescence, recounts how he once waited five hours in queue to buy velvet for trousers at the now high-end shopping centre ‘tsum’ in a queue which was a few ‘floors’ long.

There are numerous Russian jokes about queues set in Soviet times, one of which I will recount. A man is standing in a long queue, when a woman joins the queue and asks him “shto dayut?” meaning what is being given (sold)?. To which the man replies “Rem-brand-t”. The woman asks is it better than ‘Krimplen’ (a type of cloth)? The man says, “Dunno, I haven’t had any to drink yet.”

The joke is a satirical reflection on many aspects of Russian life. One, there are long queues in front of museums (Rembrandt probably refers to an art exhibition). Two, considering that the Soviet times were times of ‘deficit’, people would join a queue for anything they could buy, as everything was always in short supply. If it was of no use to them, they would simply exchange or resell the item. And three, it validates the Russian stereotype that men are always thinking about vodka.

Want a feel of this queue? Pick up a copy of Vladimir Sorokin’s ‘The Queue’. Yes, an entire book has been written on this. As for me, I must run to the bank now and secure my place in a queue to change some money. So much for a full blooded first- hand experience of the Russian ‘institution’ that is the queue.

Have a great work week ahead,