Of Victory and Immortality 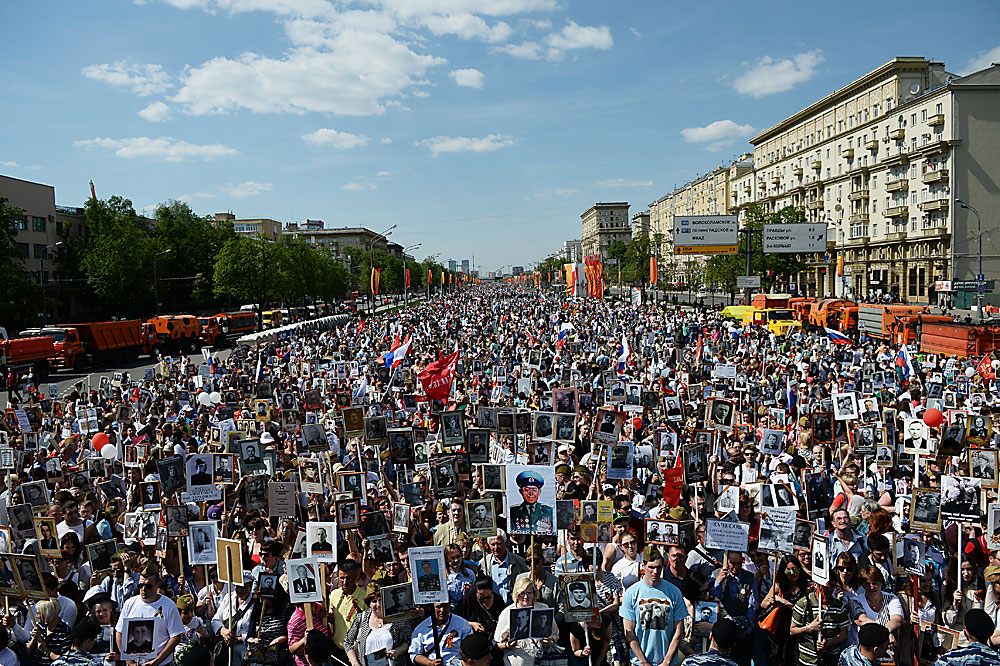 Participants of the “Immortal Regiment” march in Moscow on May 9 2016.

The morning after Victory day here in Russia, the radio is still crooning Soviet songs of war. Someone on television is saying, “We are a great people, we must never forget our history”.

May 9 is the day which made me fall irrevocably in love with Russia and its people. It is Victory Day; a day that marks the Soviet victory in the Second World War. The enthusiasm of Russians with their voracious appetite for festivals and celebrations can be infectious. I am still only partially awake, stretching aching to spend the day languorously in bed with a book.

On Sunday night, ‘the eve of victory’ to set the mood for the day ahead, we drove around Moscow listening to Soviet war songs, a collection of carefully selected masterpieces, put together by my dear friend who, given his sharpness of mind and ‘secretiveness’, we jokingly call “the spy who loved me”. We looked around for the orange and black striped ribbon which is distributed by volunteers on crossings and corners all over the city in the week preceding Victory day, and were fortunate to spot a bunch of volunteers.

I, the starry eyed foreigner, photographed with them in their 1941 military uniform costume and pinned the ribbon to my chest as another sign of my love for Russia. The ‘Georgevskiy’ ribbon, as it is called, has in recent years attained cult status in Russia, (and with Russians living abroad) becoming a symbol of victory and patriotism.

The day begins with a display of military power, with government officials, diplomats, war veterans and special invitees gathering at Red Square to watch a parade of soldiers and war equipment, like the Indian Republic day parade, albeit minus the elaborate floats which I love.

Central Moscow rumbled and groaned while the river Moskva trembled in passionate patriotic fervour beneath the heavy tanks and missiles. There were arms and ammunitions which, the Russians claim, are unmatched in the world. This display of raw power was followed by a spectacular aerial display with comely fighter jets in immaculate formations. It is much like the military portion of our own parade back home in India, but what sets it apart is the millions of uninvited educated Russians that throng to the streets with family (including infants in perambulators), proudly wearing the ‘Georgevskiy’ ribbon, to catch a glimpse of the war equipment as it returns from the parade, the air resounding with their passionate, sometime hysterically so, shrieks of “Russia Russia” or “Urra”.

It is my favourite public holiday for a reason. I remember going to Park Pobedy (Victory park) many years ago for the first time to get some colourful pictures on my newly acquired digital camera. It was a phase when I was quite the enthusiastic photographer. What I returned with was much more than photographs. I came home with my heart filled with love for the “Rooski narod”, the Russian people.

After the morning parade in Red square, the war veterans head towards parks, with Victory park being a favourite. The Russians throng to the parks in tens of thousands to partake in the festivities. The government ensures that bright tulips picturesquely line the park’s flower beds and the sky is clear and bright.

In my last letter, I mentioned how the sky was artificially cleaned to ensure good weather on some public holidays. There is a government concert featuring patriotic classics which Russians (and those of us that are ‘Russianised’, yours truly included) seem to love. The parks are picture perfect. But what enthralls the heart, the lens, alas, cannot always capture. It does not capture something the Russians call ‘dusha’ or soul.

World War II veterans, old people taking ginger steps in full uniformed regalia are a sight to behold. Their bodies weak, but their ‘dusha’ bubbling with pride and memories of a war well fought. Most come with their husbands or wives. Yes, there are women war veterans.

Many Russians turn up with flowers, usually carnations, they walk up to the veterans, present them a long stemmed flower and say “Spasibo za Pobedu;” “Thank you for bringing us victory”. I cannot put in words how the scene first tugged at my heartstrings many summers ago. It still does. Perhaps more intensely now because the veterans have grown older and fewer in number. Children walk up to them and read poetry or sing songs with words of eternal gratitude. The general sentiment is, “If not for you, I would not have existed and not breathed beneath these free skies”. Some bring the medal pinned jacket of a deceased spouse. Such purity of sentiment has the power to touch the deepest confines of the heart. I am not given to sentimentality, but it can be quite a tear jerker.

To understand the meaning of his words one must know that almost every second Russian family has personal war stories that have been handed down as family heirlooms. I have myself heard friends recount war tales of horror which they have heard from their (great)grandparents.

The government last year introduced the concept of something called “Bessmertny Polk” or “The Immortal Regiment”. Families could upload photographs of ancestors who have participated in the war. Special government sites, including the post-office, I believe, supported the initiative. The photographs are blown up to about a 15x 12 size, mounted on light material to be carried as small banners. In the afternoon of Victory day, at an appointed hour, appointed place, thousands of Russians gather to march in solidarity with these mounted photographs making it the “Immortal Regiment”. Thus these soldiers live on.

This year 700,000 people turned up (according to news statistics) in Moscow. The parade lasted for about two and a half hours, with the Russian President joining in with his father’s (also named Vladimir Putin) mounted portrait. People in the procession sang patriotic songs. The Tverskaya street reverberated with cries of “Urra”, a war cry which the “immortal army” imitated. By some stroke of chance, I ended up joining the march alongside a Russian friend. I was witness to “un sentiment extraordinaire!” The marching “immortals” noticed an old man standing in the balcony of one of the elite flats alongside Tverskoy street, wearing his medals, and up went hundreds of thousands shouts of “Spasibo” or “Thank you.”

My friend, who I had the pleasure and privilege of accompanying in the march, tells me that her late grandfather was a Second World War veteran. He was 16 when he went to war and returned with injuries. Her mother being a late child, her grandfather had participated in the war, unlike other Russians of her generations whose great–grandfathers were war heroes. The ‘spy’ too tells me how his grandfather served in the war and lived to tell the tale. After the war was officially over, his grandfather did not immediately return home. He stayed on for another year posted somewhere in Poland.

The Russians are emotional about their history and war. Russia’s participation in the Second World War is also known as The Great Patriotic War. A fellow researcher and friend spent a lot of time and energy last year to trace his ancestor’s grave. Another distinguished Russian I am privileged to know tells me that he looks at the medals and military orders that adorn the wall in his study and is reminded of the fact that, the existence of his father and himself and his generations to come depended on his grandfather’s return. He watches Soviet war films teary eyed. He says that films and history books, apart from family stories, help them remember their history. The Russian Victory day slogan is “Myi Pomnym” or “We remember”. True to their word, the Russians do ‘remember’ the war. Himself a grandfather now, he participated in the “Bessmertniy Polk” procession, proudly with a portrait of his family hero. He drove into the city to participate in the parade. Another friend from a family from a cinema background, regretted not being able to join this year as he was traveling out of the country. The Immortal Regiment march bound people together, irrespective of class or age markers, into one patriotic whole.

I often love words not just for the meaning they encompass within their frames, but also for the way they sound, their ‘texture’ in my mouth. One such beautiful Russian word which I love is “Mashtaab,” meaning scale. In Russia, everything is “grandiose”. The victory day celebrations come to a close with a display of fireworks. The sheer scale or “mashtaab” of the fireworks stunned even someone like me, who has been witness to many an Indian Diwali.

The moon, a mere slice in the inky night sky, its chin slightly turned up, watched the fireworks in open jawed awe. In a display of dyna–might, the Russians again proved they can do everything, even turn night to day. The fireworks begin at 10 pm and lasted ten minutes simultaneously at 16 locations in Moscow. Each year we turn up at the river bank late evening and lie on the grass slopes nearby with friends to watch the fireworks’ display. The hilly riverside is my favourite vantage point as you can see not just the resplendent skies above, but also the shimmering waters below. This year, following the immortal regiment march, I was too tired and it dawned at me that I wasn’t really as “immortal” as I believe. So I decided to take a breather and watch from my window from where I get a perfect view of not one, but two “salute” locations. The fireworks set the night skies ablaze, and sent people in other windows of my building shrieking in delight.

There is nothing tame or average about Russia. It can make parched hearts overflow with emotion. An electronically controlled system of shooting the fireworks into the sky was specially set up for the purpose. Some of these little (or not so little) bombs were of over 1 ft diameter and were shot 400m up into the air. To complete the effect, canons were set up on the ‘Poklonnye Goriy’ or ‘bow–down hills’ near victory park to set the skies thundering with a gun salute accompanying the fireworks.

Such is Roosland! Next year, you must visit me in May to catch the delights that the city has to offer. I shall leave you to thoughts of a promising Moscow visit while I get out of bed now and get some work done before another crazy Russian weekend begins.