Of the summer solstice and dark memories of war 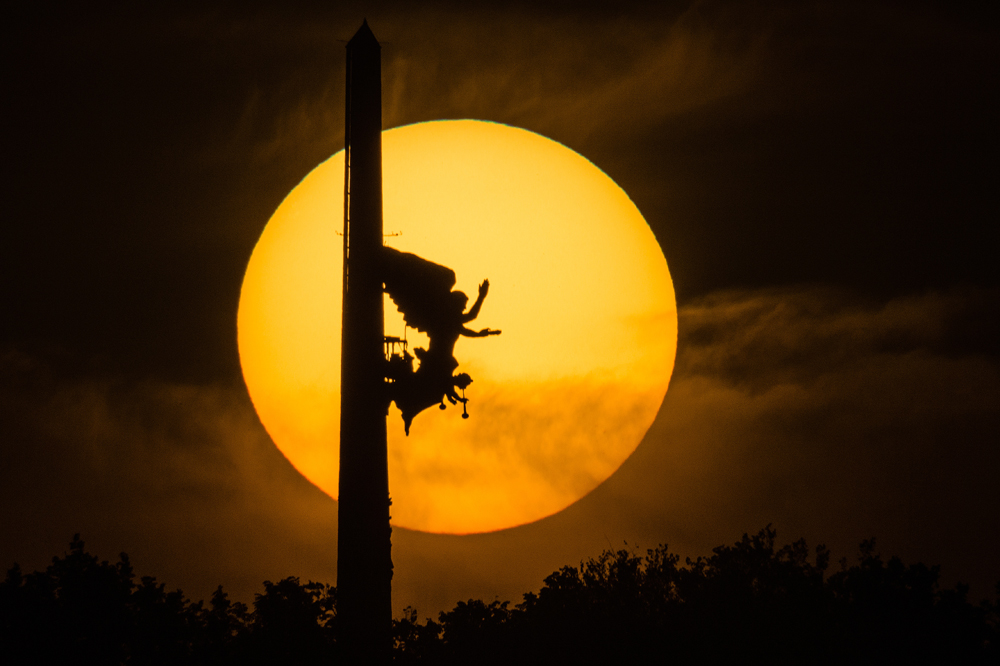 Stella on Victory Square at Poklonnaya Hill in Moscow.

Vladimir Sergeev/RIA Novosti
An Indian woman in Moscow recounts her experiences of the Russian summer in a letter home.

This is the week of the summer solstice. The days are now longer, the nights “whiter” and shorter. The inky blackness of winter evenings has long been replaced by powder blue evening skies splashed with white and gold and orange. Moscow could well vie for the title of “The land of spectacular sunsets”.

The divinely fragrant flowers are not to be seen anymore. The parks are replete with people sunning themselves for that coveted golden tan. Occasionally, one can see a lone easterner with a light parasol to keep off the sun. My neon yellow umbrella sticks out and draws disapproving glances sometimes. I am just not a summer person. I’d rather be aestivating than strutting about in this blazing sun.

Dinnertime has been moved to a later hour now, because the bright skies dupe one into thinking it’s still daytime, until one looks at the watch and realises its almost bedtime. Late evenings are pleasant and seduce one into taking long thoughtful walks in the woods. There is precious little that I find agreeable about the summer besides longer days and scrumptiously turgid strawberries.

A little farther up north in Russia, this is the time of the white nights. Saint Petersburg, at this time of the year attracts many tourists, its nights filled with a soft white light, never really going completely dark.

But despite the beautiful silver white light, the summer solstice brings back a dark memory for the Russians. On this day, while the skies were still only half awake with the first glow of the sun, the Germans attacked Russia without warning. The western front of the country stood in the line of fire.

This year marks 75 years from that fateful day. Hoardings saying “Miy pomnym”, (“We remember”) have gone up again. At 4:00 in the morning, hundreds of thousands of candles were lit all along the Moscow river, in churches, and at the tomb of the Unknown Soldier, where flowers were offered to the memory of those who died. The mood so heavy that even the skies began to weep a light drizzle.

In various places in Russia, school proms were re–enacted to mark the memory of the day when, straight after finishing school, these young men and women, still in their teens, rushed to the war front. Flags are down at half-mast and television again features interviews of veterans and words saying, “Thank you, dear veterans for saving our land”.

War in Russia is every family’s personal history. It is imbibed from their childhood that they cannot forget the war because so much blood was shed to protect their fatherland. The use of the word “fatherland” (and not ‘motherland’) here is deliberate. Russians call it the “Velikaya otechestvennaya voina” (The great war of the fatherland). Etymologically, the word otechestvennaya comes from the word ‘otyets’ meaning father.

How little I know of the Second World War! Somehow I never thought it to be “our” war until a Russian friend pointed out to me that India lost very many soldiers in World War II and asked me  how we felt about the war, mildly thanking me for fighting on the Russian side.

To my utter dismay, I “feel” nothing. It’s just a chapter from my school history book, a date I had to memorise, no more. Somewhat ashamed at my own apathy and ignorance, I decided to check with my schoolmates about what their feelings were about war and history. This resulted in somewhat heated discussion with my schoolmates and I realised there is an “absence” of history in our blood. Most said they couldn’t remember what we were taught about history in school. Surprisingly, a well meaning classmate who had opted for history as a subject in high school, recommended an Indian history reference book by a British author.

Therein lies the crux of the matter. As my Russian friend had earlier pointed out, we have allowed foreigners to tell us our history. When I turned down an offer to google the information, and insisted that I was interested solely in the Indian viewpoint on a number of historical events in our history, another schoolmate chipped in that history was not a “viewpoint” but facts. It set me thinking. The common man is convinced of history being “objective”. Only those with some college experience come to understand that history is not an exact or natural science but a social science.

As I have written to you in my earlier letters, I am very impressed by the erudition of Russians and their interest in history. Just as we believe history to be objective, they too believe in its objectivity and strongly stand by their “version” of it. This is another one of those things that I like about the Russian people - their pride in their history.

Just last month these hoardings saying “Miy pomnym” were everywhere. And now they have gone up again.

To understand how much emphasis the Russian mind places on remembering the past, I must tell you about a fictional character “Mankurt,” from a novel written by a Soviet diplomat. I can’t be sure if the character was created by him or if it existed in legends long before it found mention in the book. The word however has come to be part of the Russian language and is used to describe a person who has lost connection with his roots.

In the book, Mankurt was a prisoner who is turned into a slave. To achieve this, his head is wrapped in wet animal skin and left out in the sun. The leather dries and tightens, causing acute pain, and he begins to forget his past and turns into the perfect obedient slave. It is an allusion to the fact that we must never forget our past or else we would be reduced to a slavish state of mind.

So I guess my mood for the day is philosophical and somewhat melancholic. Russia does that to you! Russia makes you smile and makes you weep. It has the power to shake you up like a can of fizzy drink until emotions begin to sizzle out of you!!

I must leave now to wallow in my own ruminations.

Write to me at indiangirlmoscow@mail.ru