Of love, desire and marriage 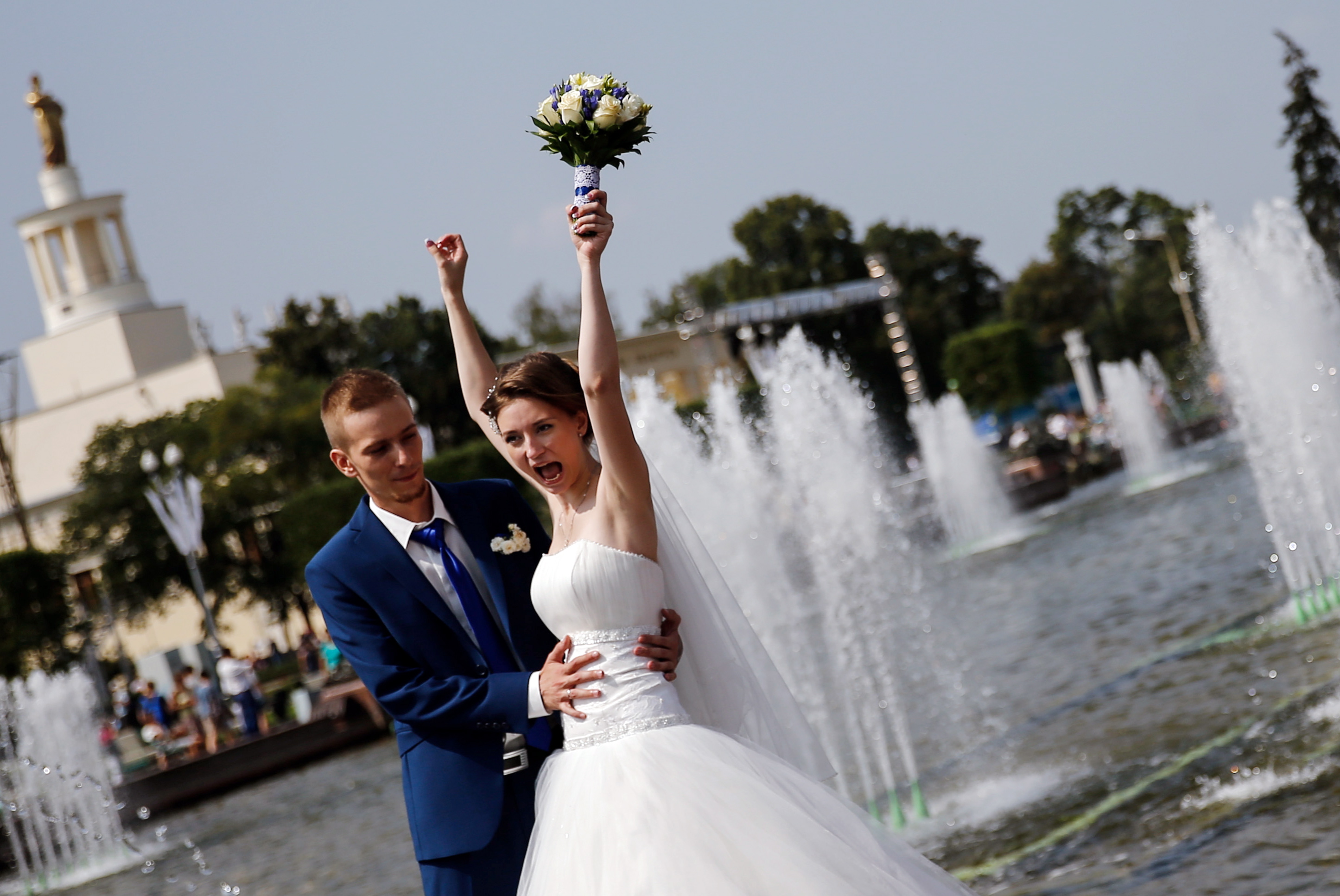 The average Russian wedding is not as large as its Indian counterpart and is attended only by those closest to the couple.

Alexander Shcherbak/TASS
An Indian woman in Moscow writes home with nostalgia about love and marriage in the backdrop of summer gradually giving way to autumn.

The temperature in Moscow has registered a sharp drop, giving some respite from this crazy heat. It is now a pleasant 19-20 degrees. The Moscow heat appears to have a sharper bite than the Delhi heat or perhaps my memory of an Indian summer is clouded in air-conditioning, which alas has become an essential part of the comfortable urban life.

I am missing home so much again, especially in the afterglow of another Russian festival,“The Day of Family, Love and Fidelity,” which is celebrated on July 8. The Russian word for family is Semya. Interestingly, there are at least two versions of the origin of this word, as ‘Sem’ in Russian means ‘seven’ and ‘ya’ means ‘I’. Some say that an ideal “semya” is “sem” plus “ya”. Others say that it means the people in the family are like seven facets of “ya”. These versions hold little or no etymological credence but the idea of a large family sounds sweet, given Russia’s low population density against its colossal territorial expanse.

On this day, couples who have completed 25 years of marriage are honoured, various concerts are held and couples who have many children receive honours and gifts. It is also believed that marriages solemnised on this day last forever and so one can see an array of gleaming stretch limousines and many a flushed couple in bridal finery locked in dreamy embrace, posing for wedding pictures against the picturesque Moscow backdrop. Most young urban Russian couples usually complete marriage registration formalities early in the day and then spend the rest of the day posing for photographs with friends, driving around in a hired limousine and end the day with a wedding banquet at a restaurant. The average Russian wedding is not as large as its Indian counterpart and is attended only by those closest to the couple.

It sets me wondering if 25 years of marriage really is that much of a heroic feat so as to deserve a pretty medal with a chamomile, the Russian symbol of love, engraved upon it. Sad as it may sound, most of my generation Y friends have grown up in broken families. As an outsider, it appears to me that compared to India, the men are less giving, the women more demanding.

The gentle delicacy of the man–woman relationship appears missing. The Russian woman is capable of maintaining a perfect ebony manicure, holding a job, making babies, walking two kms to the metro wearing 4 inch heels in ten minutes and lugging heavy grocery bags home, just to name a few things. She may want a man, but doesn’t quite “need” one.

I remember a conversation with an unknown man whom I had waved down for a paid hitchhike. We got to talking about marriage in India and Russia and he was surprised to know that the divorce rate in India was less than 2 percent. He said to me that in Russia, it is not the men who leave their wives but the wives who leave their husbands.

While it had surprised me then, over the years, I am constrained to accept his statement as being mostly true. Is this a fallout of women’s emancipation? Well, if broken families result from independence, personally I prefer the status of an “oppressed” Indian woman.

Russians ask me sometimes how difficult it must have been for me to “fight” my family for this independence to live in Russia and pursue my dreams. Honestly, I have never even had to give this a thought. Family support is something we can count on and take for granted. No, not every woman gets such “freedom”, I’m told. But I tell my Russian friends that in India, those who don’t have family support are the exception rather than the rule. And this is true across classes.

I remember, when one of our maids was having an extramarital affair, her husband requested us to intervene and keep the marriage from breaking. Indian marriage is “an institution.” It can bend and crack and crumble and lose shape but it does not break readily. Why? Because we seem to have an inborn gene to love and to forgive. I have noticed that here people stop loving each other because the other person ceases to “deserve” it. In Russia, one has to constantly make an effort to remain “loved”. In India, love grows. We love someone not for what they are but despite what they may become. Most Indian women gain weight after marriage. The average Indian woman doesn't obsess about grooming, or make-up.

In Russia, there are numerous classes that teach belly-dancing, or some other form of erotic dancing, women are extremely conscious about their appearance with most offices having at least one employee with artificially plumped up lips. When I was pursuing my Master’s one of my dear friends showed to me the censored version of a strip sequence she had prepared for her boyfriend– it was performed with such finesse that it made my eyes pop out in open-jawed awe. My Indian friends on the other hand, may have shown some amateur teen interest in this somewhat dubious art, but nothing that comes anywhere close to such Russian talent. Convoluted as my taking pride in this may seem, I am glad that we can afford to not be “beautiful”, for our men care for us and desire us despite the bulges. And we in turn care for them.

Russians have 3 kinds of “marriages”. The first is a live-in arrangement which they call “grasjhdanskiy brak” that roughly translates as ‘citizen marriage’. For some couples, this arrangement matures into a real marriage, while others continue to live this way for years.

In India, marriage is still largely a socio-economic arrangement while in Russia it is purely a romantic arrangement and given the ephemeral nature of romance, it is wont to fade and dissolve.

In India, where the divorce rate is low, choosing to leave when you could’ve stayed is still stigmatized. We are socially tuned to ‘making it work’. In Russia, choosing to stay (and compromise) when you can leave is an act of cowardice looked down upon by friends. I often hear people on family reality shows on television ask why someone spent x number of years with a spouse when they had stopped loving them.

Love. The word love encompasses in itself different meaning for different people. It can stand to mean a myriad things. As a linguist, words have always interested me. In Russian the verb “to love” is “lubit”. Interestingly, upon adding the prefix “raz”, it becomes “razlubit” which means “to unlove” or “to cease to love.” As I had mentioned earlier, ceasing to love is the norm rather than the exception here in Moscow.

The vocabulary of a given language does not necessarily have the same set of words as a different language would have, because a language is born to express the thoughts of those that use it. It pleasantly surprises me to notice that Hindi does not have an equivalent word for “razlubit” or “unlove”. I choose to think it is because we are not given to “unloving”. For us, with time, love grows. Could it be that we love differently, secure in the eternity of love, while the Russian love that I witness around me is ephemeral?

Such are my thoughts as I turn the leaf on my calendar to August. Soon it shall be Autumn and the fruit laden trees will begin to change colour. The parks will be streaked a flaming orange and ochre– it is quite a vision. And yet, I can sense a small sense of regret softly creeping in at the passage of another summer of my life away from home.

But remember, that the seasons may come and go, and I may have become “Russianized” in some ways, my love for you and for that familiar smell of the rain drenched earth of home stays constant and eternal.