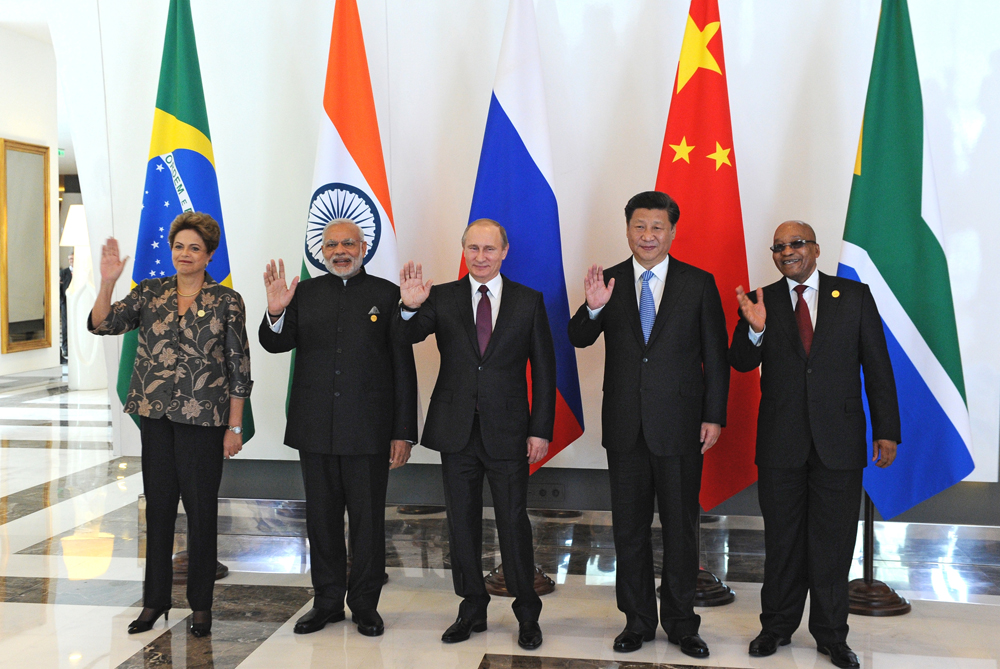 The BRICS do have problems but they are no worse than what the western countries are experiencing.

brics2015.ru
Goldman Sachs has closed its loss making BRIC fund, but the celebrations in New York and London are premature because the BRICS countries are doing just fine.

The western media loves penning obituaries of the BRICS group. The problem is these notices are being published far too often to be convincing. Clearly, if an obit appears not just once, not twice but multiple times, then you are entitled to question the judgement and agenda of these writers.

Below is a small sample of headlines from well-known media outlets on November 11, 2015. Even by the generally unbalanced standards of these publications, it was an overdose of slanted reporting:

*Why the Mighty BRIC Nations Have Finally Broken – TIME.

*The rise and fall of the BRICS – Washington Post.

*The Rapid Rise And Fall Of The BRICS – Forbes.

*BRICs was doomed from the start – The Australian Financial Review.

*Is It Time to Put Away the BRICS? – The Diplomat.

Finale of a fund

The feeding frenzy started after Goldman Sachs – the Wall Street firm whose CEO Jim O'Neill coined the acronym BRIC – pulled the plug on its money losing BRIC fund on November 9.

Before you could say BRICS, commentators in the West were celebrating the 'fall' of their biggest competitor. But you see, schadenfreude is for winners not losers. For, right now it’s the West that’s getting hit everywhere – in the markets, in the middle class, in the Middle East.

But first an explanation of why Goldman Sachs folded its flagship fund. The fund, which invested in Brazil, Russia, India and China, had lost 21 per cent over five years. Its assets declined to $98 million this year after peaking at $842 million in 2010, according to data compiled by Bloomberg.

This is market economics and has nothing to do with the rise or fall of the BRICS, which are constantly growing richer and becoming more influential.

Nothing grows to the sky

“No tree grows to the sky” or “Nothing grows to the sky” is an old Wall Street saying, meaning that a bull market (good business times) cannot continue forever. The saying dates back in print to at least the 1910s. In plain English, there are limits on growth. Growth does not continue indefinitely, eventually it will halt or collapse.

Goldman Sachs pulled the plug on the nine-year-old BRIC fund because it doesn’t expect “significant asset growth in the foreseeable future”.

Like all global economies, the BRICS are also not immune to the slowdown that has impacted almost every market. That’s the reason why the BRIC fund wasn’t making money for Goldman Sachs.

But the western media, which had witnessed the rapid rise of the BRICS as a political group alongside its spectacular economic growth, simply conflated the fund closure with a collapse of the BRICS. Here’s what CNBC says, “By shutting the fund, the Wall Street bank has signalled an end of an era in which the four developing economies – Brazil, Russia, India and China – appeared to be shaping a new world order.” (An especially ignorant comment when you consider Russia is not a developing economy, but a highly industrialised one.)

Now listen to this rant by Forbes: “With the rise of Hindu fundamentalism, it is not so much the economy of India one needs to focus on, the numbers and growth projections, but the social fabric and polity. India is the current global growth flavour until it too may disappoint and the herd will move elsewhere.”

First up, when a western commentator paints Indian nationalists as fundamentalists and brings an unrelated social theme into a financial story, then something is clearly amiss. Biased has raised its ugly head as usual. But there could also be an agenda we are not aware of but can guess – they are under instructions from their corporate bosses who are in turn following orders from their political masters in Washington DC.

Or perhaps these writers are just badly informed. One must never attribute to malice what can be explained by stupidity.

BRICS isn’t a “fuzzy geoeconomic concept!” as one fuddled reporter claims but is a bricks and mortar reality that’s growing into an even bigger reality.

In one key area the gap between the BRICS and the West is getting wider. The group currently has a population of 3 billion, that’s way ahead of the US and Europe combined. With India and China's populations still growing, the equation will only skew in favour of the BRICS in the decades ahead.

In economic terms, the BRICS rank third after the EU and US. It can be safely said that in a few short years the BRICS will close the gap and pull ahead. Even if the US remains the largest economy in the coming decades, it won't be overwhelmingly larger than India or China.

Sure, the BRICS do have problems but they are no worse than what the western countries are experiencing. Brazil, for instance, is going through a tough time economically and socially but you can't write off such a major industrialised country.

Russia's oil revenues are taking a big hit but it is making up for it by cranking up production to all-time highs. Moscow is also combating western sanctions by increasing trade with the East. Plus its weapons exports are registering a massive increase.

At the same time, India and China are trotting ahead with over 7 per cent growth, which considering the size of their economies translates into wealth gains for their growing middle class. And this is compound interest we are talking about, so where these economies will be in the decades ahead can only be guessed. A good guess is they will make the western economies appear small in comparison.

It seems 2006 was such a long time ago when the foreign ministers of Brazil, Russia, India and China first met to consider improved economic ties. Among the issues taken up was the need for a stable new reserve currency and an alternative to the US-dominated International Monetary Fund (IMF).

Just eight years later – in geopolitical terms the equivalent of the speed of light – came the New Development Bank (the BRICS Bank) and the China-led Asian Infrastructure and Investment Bank (AIIB), which together will serve the same countries and markets the IMF and World Bank serve currently.

Among other key actions, the BRICS are in the process of setting up their own international payment systems; and are kicking off mutual currency swaps and thereby avoiding dollar trade.

The BRICS, NDB and AIIB are together loosening the West’s grip on the world’s economic lever. This is the chief reason why the western media is going into a collective frenzy.

To be sure, true BRICS dominance will take time; say at least another decade or two at the most. Time enough for a lot of anti-BRICS commentators to find new careers.

Closing the BRIC Fund: Why?