Closing the BRIC Fund: Why? 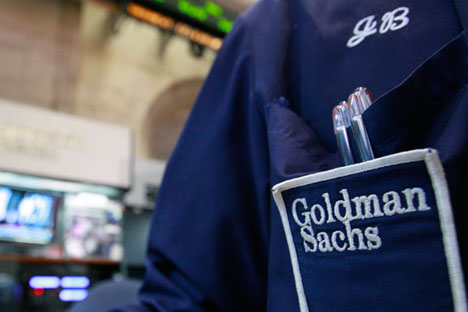 The term BRIC was coined in 2001 by Jim O’Neill, at that time the chief economist of Goldman Sachs.

Reuters
Goldman Sachs Bank has closed a fund that focused on investments in the BRIC countries. According to analysts, these developing countries have become less attractive to investors. Now that they have turned into a political union, the need for such a fund has disappeared.

The American bank Goldman Sachs has stopped the work of one of its funds, which was investing in Brazil, Russia, India and China, reports the Russian newspaper RBC-Daily, citing sources in the United States. Bloomberg has noted that the fund’s assets would be transferred to the Emerging Markets Equity Fund (EMEF). In September 2015, the BRIC Fund’s assets fell to $98 million. The fund once had a sum of $842 million in 2010. The association of BRICS countries began from this fund.

According to Pyotr Dashkevich, analyst at UFS IC, interest in developing countries has started to decline in recent years. Among the causes is the slowdown of the Chinese economy, the sanctions imposed against Russia, and the falling commodity prices. Since the beginning of 2015, the emerging markets stock index – MSCI EM, has decreased by 12%, while the US broad stock index – S&P 500, rose by 1%, and the European index EUROSTOXX 600 gained about 10%, said Dmitry Bedenkov, head of the analytical department at IC RUSS-INVEST.

“The very concept of the fund, over the past several years, has lost relevance in the eyes of investors,” said Dashkevich. The aggregation of assets of different countries in a single fund looks less understandable in today’s reality, he said.

The drop in resource prices, which occurred in 2014, has reduced the economic potential and investment attractiveness of emerging markets. Capital of funds that had been focused on the BRICS market, have moved directly to the markets of the USA, China and the EU, said Georgy Vashchenko, head of operations on the Russian stock market for IK Freedom Finance. This process will continue for at least as long as prices for exported natural resources remain low, he said. According to Bogdan Zvarich, analyst at FINAM Holding, tightening of monetary policy in the US may be another severe blow to the emerging economies. Investors on global markets will continue seeking opportunities to increase their base rates in December in the United States.

The term BRIC was coined in 2001 by Jim O’Neill, at that time the chief economist of Goldman Sachs. According to O’Neill, the largest group of developing countries had a great influence on global development. According to a 2003 study conducted by Goldman Sachs, by the year 2050, the BRIC economies, in dollar terms, would exceed the total economic production of six leading Western countries. The BRIC countries would become the main engine of global economic growth, believed O’Neill. After this study, the Bank launched its BRIC Fund in 2004.

Later, included in this stock market indicator, these countries created a political union, and then in 2010, South Africa joined the organization. The BRIC, starting from a stock market index abstraction, gradually moved onto the political plane, said Dashkevich. The initiator of building such a union was Russian President Vladimir Putin who, in 2006, proposed holding a ministerial meeting in the BRIC format. In June 2009, heads of state of the new association held their first meeting.

Interdependence of the BRICS economies has, however, remained very low. The volume of trade between Russia and the other members of the association has reached $105 billion – 50% more than in 2008. China’s trade with the BRICS countries in 2014 reached $312 billion, while with the United States, China’s trade turnover reached $592 billion.