For BRICS to bond, India-China rivalry must be history 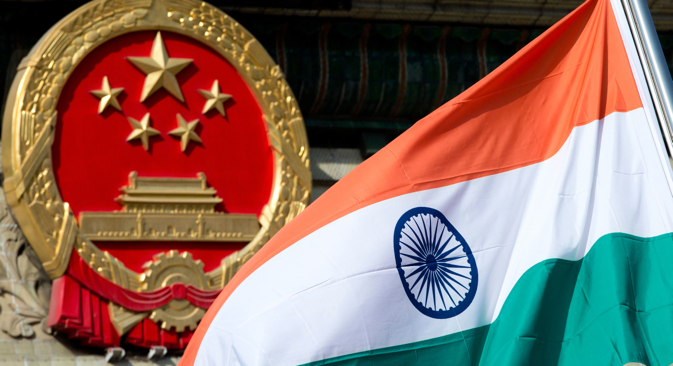 India and China will try to avoid an escalation of security crises in order to keep such crises from hindering the development of trade and economic ties. Source: AP

If India and China can stop being rivals, the BRICS could rule the world in a few short years.

In 1218 CE, the Mongol king Genghis Khan invaded India and captured Peshawar. Just when it looked like the Mongols were set to lay waste to India’s heartland, the great horde suddenly went westwards, spreading mayhem towards Europe.

The person who dissuaded Genghis Khan from invading further into India was Ye-Leiu Chu-Tsai, a Chinese court official who had been captured when the Mongols conquered Peking in 1213. It isn’t known why Ye-Leiu advised the Mongols to leave India but it may have been concern for a country that is China’s civilizational older sister.

In 1292 CE, Mongol emperor Kublai Khan despatched the legendary European traveller Marco Polo to escort a Chinese princess to marry an Indian prince. The matrimonial alliance points to the deep personal links between the ruling classes of the two Asian giants.

For centuries the Chinese looked up to India as a guru, but unfortunately that is no more the case. Today, India and China are like a married couple who have long drifted apart but can’t think about a permanent divorce either.

But things could get a lot worse. The People’s Liberation Army Navy’s acquisition of bases in the Indian Ocean is happening at a time when India is setting up brand new mountain divisions to counter Beijing’s massive armed presence in Tibet. Each time there is a fracas on the Himalayan border, we are one shootout away from a broken BRICS. This is not a far-fetched scenario. There are hotheads – linked to the military industrial complex – on both sides who would welcome an India vs China conflict.

In this backdrop, India’s Air Chief Marshal Arup Raha has chosen to stick his neck out, saying India should not look at China as an adversary anymore. Calling for mature statesmanship from India and China, the IAF chief said at a public function in West Bengal on November 4: “We are in the same region, we have common interests. I don’t think that we should look at them as adversaries anymore.”

Raha’s comments echo what another serving chief, Admiral Sureesh Mehta, publicly said on August 11, 2009: “Our trust deficit with China can never be liquidated unless our boundary problems are resolved....”

Serving military chiefs in India rarely comment on policy. The government frowns upon it and prefers that military men in uniform keep mum on such matters. Both Air Chief Marshal Raha and Admiral Mehta deserve to be applauded because it is precisely people of such stature whose words could help change old mindsets.

Indeed, Beijing responded quickly to Raha’s statement. “Noted the positive remarks made by Air Force Commander of India,” Chinese Foreign Ministry spokesperson Hua Chunying said. “We believe that we should keep deepening the strategic partnership between the two countries and push for new progress of bilateral relationship.”

As BRICS members, India and China have a major responsibility. The group not only has to repair the world’s broken economy but its fractured geopolitical fault-lines as well. The current geopolitical situation offers a great window of opportunity for both countries to bury the hatchet and build a stronger BRICS.

Russia and China are facing tremendous pressure from the West on multiple flanks. Moscow is having to fight a full-on war in eastern Ukraine as well as in Syria. At the same time, China is facing immense pressure because of the concentration of US Navy carrier battle groups in the Pacific and the arrival of thousands of Marines at the new American military base in Darwin, Australia.

The western military’s moves on the global chessboard are a desperate response to the new architecture of global finance that is emerging. In this new system, less and less trade is being conducted in the US dollar. For instance, none of the BRICS wants to continue trading in the US currency as it works only to perpetuate American power. This is why the US is using every instrument of its superpower machinery to bring down the BRICS, starting with Russia and China.

India could be next. Its political leadership needs to realise that the West might welcome them in grand gladiatorial style in Madison Square Garden or Wembley Stadium, but behind the scenes they are working overtime on destabilisation. Last year, the Intelligence Bureau (IB) — India’s premier internal security agency — submitted a report to Prime Minister Narendra Modi, identifying several foreign-funded NGOs that are “negatively impacting economic development”.

The 21-page IB report reveals that “a significant number of Indian NGOs, funded by some donors based in the US, UK, Germany, the Netherlands and Scandinavian countries, are using people centric issues to create an environment which lends itself to stalling development projects”.

If the IB’s contention that NGOs drag down economic growth by 2-3% is true, then the total national loss is as much as $60 billion – equal to France’s annual defence budget.

This is not to say that India should go back to being the wallflower it was during the past decades when it would do everything not to provoke the dragon. In fact, New Delhi’s rearmament programme should continue, it should construct military bases all along the Himalayan border, continue raising elite mountain divisions, and build nuclear tipped missiles that can reach downtown Beijing. The Chinese – like any other country – respect power and it is India’s rise as a nuclear armed adversary that has made them appreciate India’s true strength.

But now that both countries are part of BRICS and also have a trilateral dialogue with Russia, there should be no more equivocation over the border.

Indian leaders have to let go off the borders drawn illegally by our former colonial masters. The British drew the boundary when China was weak and in the midst of a revolution. The colonial rulers not only sawed off a fifth of India’s territory by helping create Pakistan but also sowed the seeds of border disputes with China. Both acts were carried out in order to keep India down because the Anglo-American empire knew a united India plus China would mean game over for the West.

Nothing would turbo-charge the BRICS like an open border between the two Asian giants. Just like European unity forms the bedrock of NATO strength, India and China must jettison their decades-old mistrust if the BRICS are to be taken seriously.

To start off, India and China should despatch a flotilla each to the Mediterranean and conduct joint exercises off Syria. India must make it clear that its interests lie with being part of the BRICS rather than with yesterday’s colonial powers who will eventually be evicted from the global high table.