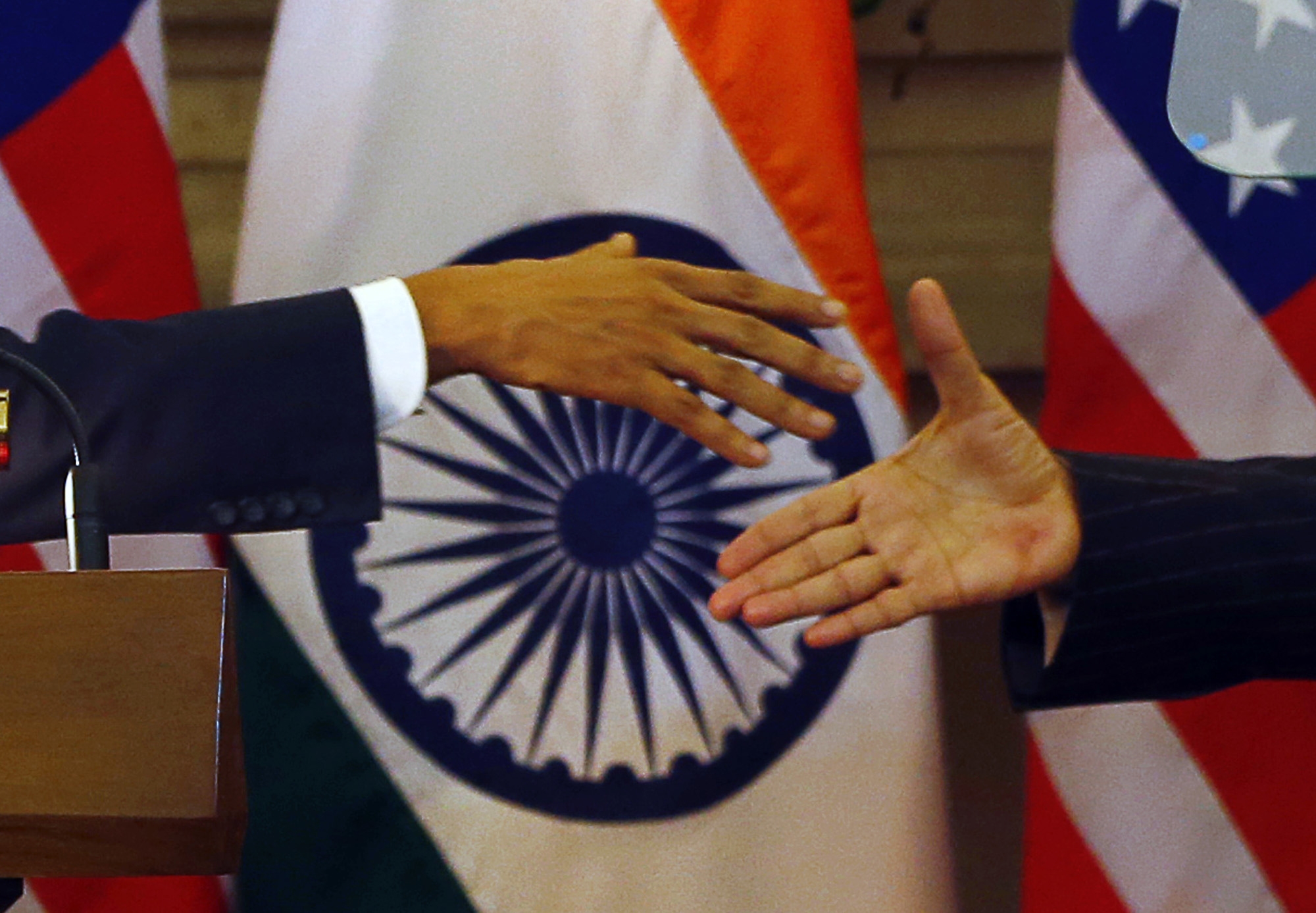 AP/East News
The US move to offer India the status of a close ally is like inviting someone to a party that’s about to be over.

It wasn’t that long ago when US Secretary of State Henry Kissinger viewed Indians as “such bastards” and President Richard Nixon described Indian Prime Minister Indira Gandhi as “that bitch”. Again, it wasn’t a long time ago that an American diplomat delivering a lecture in India described Indians as “dirty and dark”.

How times have changed. Making a 180-degree turn, the US now wants to bring India on a par with its NATO allies. A new bill introduced by Congressman George Holding on March 23 proposes to amend the Arms Export Control Act in order to expedite arms trade and technology transfers between the two countries.

The real aim of the new piece of legislation is, however, to end Russia’s dominant position in India’s defence sector. For, the official explanation that India will be elevated to the same level as America’s closest allies flies in the fact of reality. Three days after the bill was introduced, the US condemned India for testing a new 3500 km range submarine launched ballistic missile (SLBM). Going back to its Cold War script, the US criticized India’s “nuclearisation” of the Indian Ocean. (It’s a different matter that the US itself stations hundreds of nuclear-armed ships and aircraft in the same ocean.)

An SLBM is a second strike weapon which is critical for India’s survival in a dangerous neighbourhood. It ensures that if India’s land-based missiles and air force are taken out in an enemy first-strike, then India has sufficient firepower – at the bottom of the sea – to retaliate with a devastating second strike. If the US will deny India a legitimate second strike capability, then what sort of ally or friend is it?

The India-US relationship may have come a long way from the deep freeze of the Cold War, but it is clear America continues to resent India’s rise as a major power. This is because in geostrategic, civilisational and economic terms, both countries are incompatible as allies and unlikely to form a successful strategic partnership.

If morning shows the day, the 21st century will not be America’s. As the world turns multi-polar, the US finds itself in an unfamiliar environment where it is not only having to face off old rival Russia and reckon with new challenger China, it is facing the nightmarish scenario of Moscow and Beijing joining forces. Plus, the rise of nationalism in Japan – which under PM Shinzo Abe is rearming – has also got the US searching for new strategic partners.

With the demise of Pax Americana, policy wonks Richard Fontaine and Daniel M. Kliman describe India as a “global swing state”. Such a state possesses a large and growing economy, occupies a central position in a region or stands at the hinge of multiple regions. In an interview to the Seattle-based National Bureau of Asian Research, they say alliances with swing states can “deliver a geopolitical pay-off” because the choices these nations make may “decisively influence the course of world affairs”.

If that is the definition of a global swing state, then the US has picked the wrong guys. In 2014 India unequivocally supported Crimea’s reunification with Russia. Again, as a member of the BRICS group, India backed Russian diplomacy that blocked a US assault on Syria. New Delhi also ticked off Australia’s foreign minister for suggesting that Russian President Vladimir Putin be banned from the G-20 summit in Brisbane.

Where the US wants to dominate the planet, India does not see the need for a global policeman. The defining nature of Indians is plurality. The West, which has unleashed mayhem in Libya, Iraq and Syria, has principles that differ from India’s.

A key reason for the US trying to rush through the new bill is to avoid closure of its weapons plants, especially those cranking out outdated F-16 and F-18 fighters. As the last of these aircraft roll of the assembly lines, thousands of highly skilled Americans will soon join the dole lines. This will happen in the coming weeks and months, not years.

While US weapons exports to India have grown from $300 million to $14 billion during the last 10 years, those who try to assess the state of India-US relations by looking at bilateral defence ties miss the real nature and consequences of these engagements.

The cascade of arms from the US is happening because India does not want to be entirely dependent on its major supplier Russia. The erratic supply of spare parts for the military became such a serious issue after the dissolution of the Soviet Union that India has been on a diversification spree since then.

US weapons aren’t all they’re cracked up to be. American weapons look stellar on CNN, but their performance in real combat is iffy.

The success of US weapons has come against poorly trained and relatively small defending forces such as those of Iraq, Serbia and Libya. On the other hand, India’s armed forces have used Russian weapons with spectacular results against Pakistan’s US supplied military.

India must, therefore, be wary of buying weapons that may have limited utility and questionable effectiveness.

Since the declared aim of the bill is to elevate India to the level of America’s closest allies, let’s see how the US treats South Korea, a really close ally. According to Forbes magazine, the US doesn’t trust the South Koreans with four “core technologies” needed for its KFX stealth fighter project. It says: “The Koreans have professed bitter disappointment over the refusal of the US to entrust its ally with the highest-tech stuff they say is needed for the KFX not only to have stealth capabilities but to be able to find and track hostile targets with the latest state-of-the-art radar.”

Similarly, in its dealings with India the US insists on discriminatory end-user agreements because it fears leak of technology to Russia. On the other hand, Russia trusts India enough to make it a key partner in its own stealth fighter programme without making India sign such agreements. Again, where the US exports stripped down versions of its latest weapons, Moscow provides India with Su-30MKI aircraft that are more modern than the Sukhois in its own air force.

Finally, the danger of a close alliance with Washington is that India will immediately be targeted by the ISIS. Currently, the jehadis are focussed on attacking Western Europe and their next big target is going to be the US. India should let the West deal with this hydra-headed creature - which the West created and continues to back - and not draw any attention towards itself.

The BRICS is America’s No.1 nightmare. While none of the BRICS countries has a blueprint for their specific role in a new world order, there is a clear consensus in the five-member bloc that the current system grounded in imperialism is past its use by date.

A cherished US goal is to pry India away from this powerful group. Over the past several months a concerted media campaign has played out globally about the end of the BRICS dream. At first the narrative was the group is all but finished because the economies of its members are supposedly tanking. Lately, it has been tweaked to show India is the only one standing. The idea is to make Indians believe they are too good for the BRICS; that they’d be better off with the US than as part of a spent force.

However, the BRICS way is equitable growth for all countries, not just for the US and its allies. This message has found resonance in all free-minded countries around the world, with the result that today it is the West and its economic, social and so-called democratic systems that have become unpopular. So the western pitch to India is misdirected.

Samuel Huntington’s “The Clash of Civilisations?” confirms the BRICS view of the world as multi-polar, with Russia and India as its poles. The multi-polar view is now a key tenet in Russian and Indian foreign policy.

As opposed to woolly headed liberals, Huntington is uncannily accurate in describing the wide chasms that separate Russia from the West and the West from India. Indeed, other than democracy, India and the West have little in common. Take India and the US. India is a largely liberal and pluralistic society whereas the US is a puritanical nation where nearly 70 per cent of the population believes in Creationism and believes the rest of the world should be evangelised.

The US Commission on International Religious Freedom; which pompously describes itself as the nodal government body for “religious freedom in the world;” equates the Islamic State with India’s Rashtriya Swayamsevak Sangh (RSS) of which Prime Minister Narendra Modi is a member. On September 11, 2014, it tweeted: “Hindu Nationalist Group Seeking to Cleanse Christian Presence From #India Is Not Unlike ISIS.”

The American Christian Right – backed by the US government – sees India as the last major stronghold of the pagans that needs to be stormed. The US media is strongly connected to these groups and the likes of the New York Times and Washington Post routinely carry negative stories about India. Any steps taken by the Indian government to stop their aggressive proselytising is enough for them tag India as the villain.

Interestingly Congressman Holding, who introduced the bill in the House, belongs to the Christ Baptist Church in Raleigh. Its mission, according to its website is "Taking the Gospel to the World”. The work of this church, says the website, includes “evangelism and missions”.

The US military also promotes evangelism among its troops. One of the reasons for the strong backlash faced by US military forces in Iraq and Afghanistan was that US troops were stepping off the plane with plenty of Bibles, which were offered to the locals.

One US report says evangelism runs deep in the US Army. “Soldiers on the battlefield have told disturbing stories of being force-fed fundamentalist Christianity by highly controversial, apocalyptic "End Times" evangelists, who have infiltrated US military installations throughout the world with the blessing of high-level officials at the Pentagon. Proselytising among military personnel has been conducted openly, in violation of the basic tenets of the United States Constitution.”

The US brand of militarism is not only dangerous in itself but it could also infect the Indian military which is liberal in its ethos.

India, therefore, has to be on guard against the agenda of American lawmakers allied with fundamentalist forces.

Who gains, who loses?

The constant refrain that India will be the big winner from a close alliance with the US could be a smokescreen for the real beneficiary to sneak through. Says Stephen Cohen of the Brookings Foundation: “The US should bring Indian defence personnel into its system to experience it, and to share India’s best practices. These do exist: India does well in producing more rumble for rupee in space and missile technology, for example. Indian space and nuclear experts believe they can help the US develop missile and even reactor technology, and such offers should be taken seriously, with the US adjusting its own technology restraint regimes to benefit from the high quality and low cost of sourcing from India.”

India needs to figure out who will gain more from closer India-US ties and whether it is worth going through with such an alliance.

Then again, in its dealings with the US, India’s leadership may be following the advice offered by Mario Puzo in The Godfather. “Keep your friends close but your enemies closer.