Fake MiGs! Missing Antonovs! Why India must keep away from Ukraine 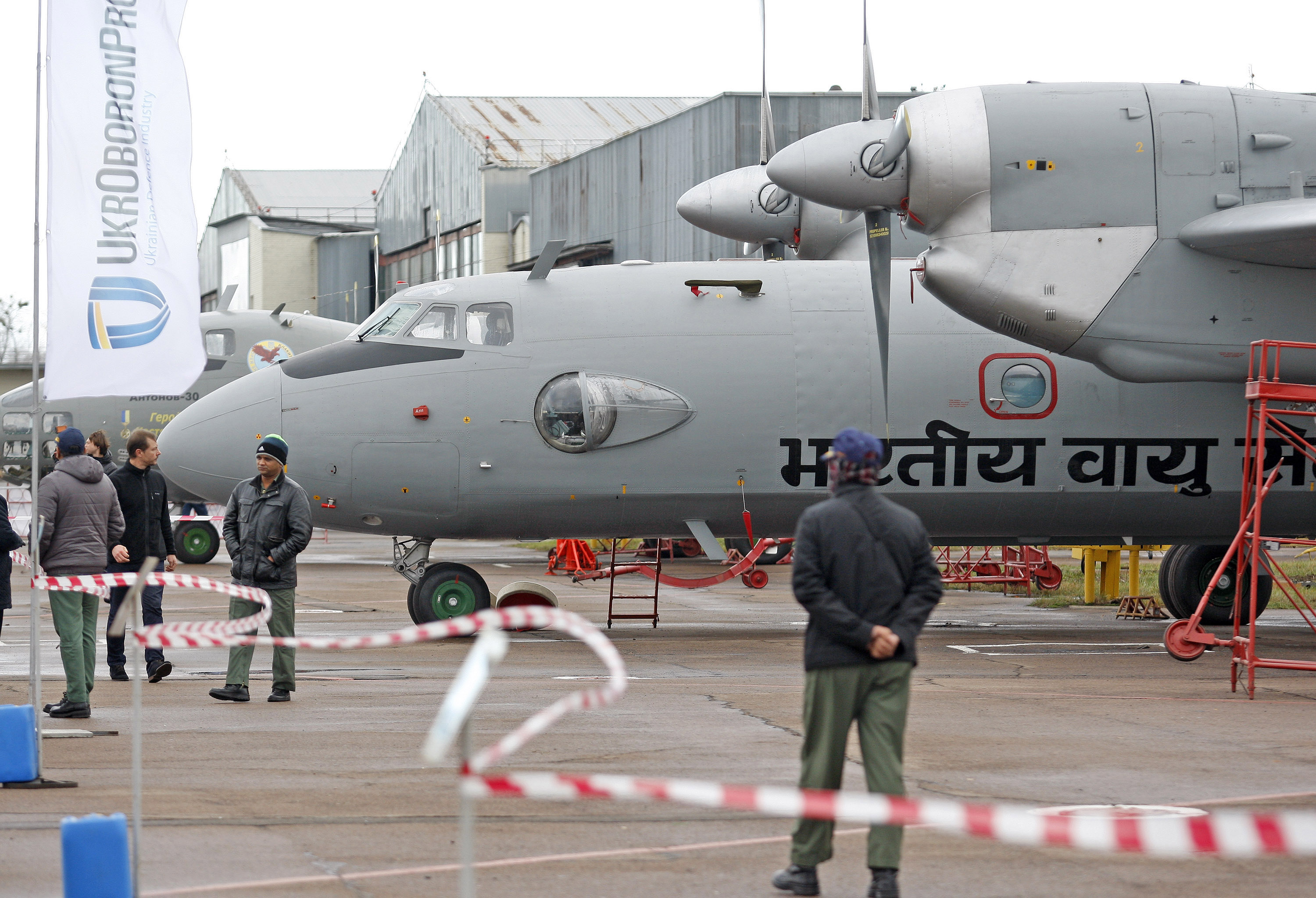 Representatives of Indian Air Force during the handover of 5 modernized AN-32RE planes for IAF on November 19, 2015 in Kiev, Ukraine.

BarcroftMedia/TASS
Ukraine wants to enter the lucrative market to upgrade India’s Soviet era weaponry, but New Delhi must stay away from this dysfunctional country.

A year after the fiasco of losing five IAF aircraft sent to Ukraine for upgrades, the dysfunctional country is making a renewed pitch to re-enter the Indian defence sector. At the recently concluded Defexpo in Goa, Perto Fedoruk, chief adviser to Ukraine’s largest defence industry consortium, Ukroboronprom, offered to break the “Russian monopoly” in the maintenance and upgrade of India’s Soviet era weapons system.

Considering that the overwhelming majority of India’s defence hardware is of Soviet origin, their future refurbishment could translate into tens of billions of dollars. Ukraine’s defence industry, which has been hit hard by the ongoing civil war in the country, would no doubt like a slice of this pie.

But are the Ukrainians in a position to serve India’s growing and increasingly complex requirements? For, currently they can’t even serve the needs of tiny Croatia.

According to a report in Croatia’s Jutarnji List, the country’s military police is conducting a major investigation into the refurbishment of MiG-21s, which were bought and refurbished in Ukraine. Initial investigations have revealed a number of irregularities and there is suspicion that bribes were paid.

The refurbished MiG-21s were handed over to the Croatian Air Force (CAF) in July 2015 and, ever since the planes arrived, problems started to emerge. Eight months later the CAF has just three planes available for operations, while five are not operational. What seems to have happened is fraud and duplication on a brazen scale. The serial numbers on the MiGs have been changed and the parts that were changed do not match the ones listed in the paperwork, raising serious suspicion that the planes could be five years older than their accompanying documentation claims.

Worse, the refurbishment of the MiG-21s may not have been carried out at all and that this was one of the reasons why the planes kept breaking down. “We do not know if the planes that were sent to Ukraine for refurbishment are the same ones that came back,” a source told Jutarnji List.

Now you’d think the stink has got bad that it couldn’t get any worse. But it really does. A year before the refurbishment contract was signed, Ukraine offered to sell eight MiG-21s to Croatia. When the Croatians conducted a few enquiries, they found out that the MiGs were apparently owned by Yemen and not Ukraine.

Jutarnji List says even the five planes that Croatia did end up buying from Ukraine were put together using parts from all over the world - the hull is Bulgarian, wings from Algeria, and only the gas tanks have Russian insignias on them.

And there could be more scandals to come. Says Danni Matijaca of Total Croatia News: “We believe many other shady dealings will be uncovered as time passes.”

How can you lose an aircraft?

Well, you can if you are a Ukrainian company. A major crisis involving Ukraine erupted in April 2015 when the Ukrainians – believe it or not – lost five AN-32 transport planes belonging to the Indian Air Force. These aircraft were part of a batch of 40 AN-32s that had been sent to Ukraine’s state-owned Ukrspetsexport for upgrades and refurbishment.

The remaining 64 An-32s were to be upgraded at the IAF’s Kanpur air force base, under a technology transfer from Ukraine, but the planned upgrade was halted as Ukrainian engineers walked out of the job and supplies of spare parts stopped. While you are entitled to laugh, the IAF brass didn’t find it so funny. They raised an almighty fuss and told the Ukrainians: “Find our planes.” The An-32s were ultimately found and flown back to India.

A diplomat from the Ukraine embassy told the Indian side that the IAF must resolve this issue with Ukrspetsexport, and that the Ukrainian government “cannot help”. Financial portal Zero Hedge comments: “We wonder if that rather unhelpful attitude has anything to do with India not imposing sanctions on Russia.”

In 1996, Ukraine announced the sale of more than 300 T-80 tanks to Pakistan. It also decided to manufacture medium guns for the Pakistani tanks. In June 2002, the two countries signed a $100 million contract for producing transmission equipment for Pakistan’s Al-Khalid tank.

Ukraine is participating in the implementation of over a dozen projects in the military-industrial sphere in Pakistan. Contracts have been signed for establishing two repair test bases for T-80s in Pakistan. Kiev may also avail of an opportunity to export new air defence units which were recently tested in Pakistan.

More recently, Ukraine attempted to play spoil sport in a major India-Russia defence deal. New Delhi and Moscow are circling around a $3 billion contract for new Talwar class frigates. In line with the Narendra Modi government’s ‘Make in India’ push, the production of these frigates will involve an Indian partner, most likely Pipavav Shipyard owned by the Reliance Anil Dhirubhai Ambani Group.

The only potentially problematic issue with the Talwar deal is the ship’s engine, which is built in Ukraine. Initially, the Ukrainians refused to work with Russia, but subsequently are said to have agreed to supply the engines if they are meant for use by the Indian Navy.

Ukrainian involvement could be a tricky affair. The engines will need to be serviced at some point in time and if Ukraine is flat broke or simply decides to play spoiler – at American instigation, in order to make Russia look unreliable – the Indian Navy could be staring down the abyss.

According to Ukroboronprom’s Fedoruk, “For nearly a decade, Russia has forcefully blocked our entry. We have offered multiple solutions to give new life to Soviet-era weaponry, as we are the original equipment manufacturer.”

Since a number of defence systems that India acquired from the former Soviet Union were entirely or partly built in Ukraine, there is a good chance that the Ukrainians will make a bid for upgrading such equipment.

But here’s the rub. It seems Ukraine’s primary preoccupation is to spite Russia at all costs, to play spoiler. Winning business or making friends in India is secondary, as the An-32 incident bears out. Considering that everything Ukraine touches turns to rust, it would be a brave commander or bureaucrat who sticks his neck out and allows Ukraine to enter the Indian defence sector.