How the West took the Olympics away from Hellenic ideals 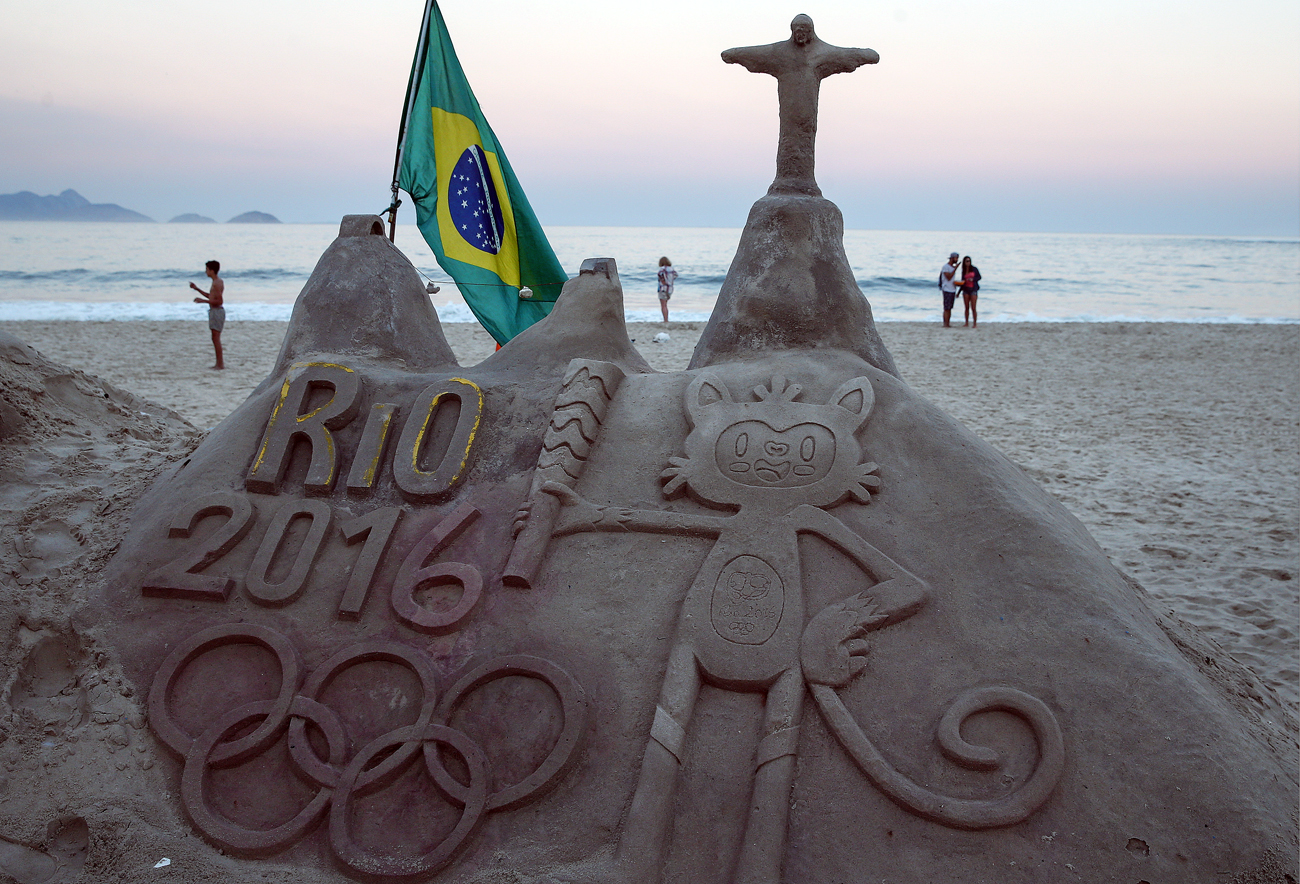 The Rio Olympics took place in the backdrop of raging wars in Syria, Libya, Iraq, Afghanistan, and numerous smaller conflicts in other countries.

Stanislav Krasilnikov / TASS
The injection of politics is making a mockery of the Olympic spirit. What can be done to save the Games?

Well, that’s not true. Here’s Owens’s version: “When I passed Hitler, he rose and waved at me and I waved back.”

Owens said it was US President Franklin Roosevelt who refused to extend him the same congratulations that other American athletes experienced upon their return. “Hitler didn't snub me, it was our own President who snubbed me.”

Race, politics and violence have been intertwined with sports since the beginning of the modern Olympics. Boycotts marred the 1954, 1964, 1976, 1980 and 1984 Games. The 1986 Seoul Olympics, the first Games following the end of the Cold War, promised a new era of tension-free participation. However, the moment the Winter Olympics were allotted to Sochi, Russia, the boycott brigade surfaced once again.

Doping: Why western athletes are the real champions of steroids

Sadly, the biggest victims of politics in sports are the athletes who train for years and then miss their often only shot at a medal and glory. Why is the athlete – who was the central figure during the ancient Olympics – sacrificed at the altar of politics at the modern Games?

The modern Olympics, which were revived in 1896, are very different from their ancient Hellenic origins. First, like the Elgin Marbles that the British stole from Greece, the Olympics are among the booty taken by the West during the colonial period. Greek author Evaggelos G. Vallianatos said, “The people of the West, who now own the Olympics, have the illusion they are following in the path of the Greeks. They are not.”

Vallianatos explains in his book ‘Christians and the Classics: War against Reason’, “The reason is they are now tied to a different civilisation with different values....The Hellenes started the Olympics to honour Zeus, father of both gods and people, and to remind themselves of their common culture. It was an athletic event and a pan-Hellenic religious and political celebration of athletic excellence that marked the unity of the Greek world.”

The Games today have become an extension of geopolitical competition. The Rio Olympics, for instance, took place in the backdrop of raging wars in Syria, Libya, Iraq, Afghanistan, and numerous smaller conflicts in other countries.

In contrast, before the ancient Olympics commenced, the Greek city states declared a truce. The truce was written on a bronze discus kept in the Temple of Hera, the wife of Zeus. It stated that all states taking part in the games were forbidden to go to war, carry on a dispute in a court of law or execute criminals.

You get the picture – in ancient Greece, the Olympics brought nations together whereas the modern Olympics are an arena where nations couldn’t be more divided.

The Frenchman Baron Pierre de Coubertin is credited with reviving the Olympics. But in reality, he snatched it from under Greece’s nose.

In the 390s, Roman emperor Theodosius had stabbed Hellenism in the heart when he banned the Olympics; after it had run for 1169 years. The revival started in the mid-19th century when several pseudo Olympic festivals were held in Europe, and a movement for restarting the Olympics took root, rather appropriately, in Greece.

“The Greek poet named Panagiotis Soustos wanted to recapture the glories of ancient Greece and thought that the Olympics might contribute to it,” writes Toby Rider of the University of Western Ontario in 'The Olympic Games and the Secret Cold War'. “His ideas reached a wealthy compatriot by the name of Evangelis Zappas, whose riches paid for several Olympic festivals, beginning in 1859. The absence of determined leadership, coupled with the ambivalence of the Greek government, condemned this revival. Only later was the legacy of the initiative grasped by Coubertin.”

In fact, when the Greeks suggested that the Olympics be held permanently in their country, Coubertin pretended he didn’t understand what they meant.

Once the Olympics came under the control of France and other western powers, they were considered a handy platform for propaganda. The Cold War gave them the excuse.

Rider explains: “For only a few short years after WWII, the US government dismantled its capability for psychological warfare and propaganda. In 1948, the mechanism was in swift rehabilitation. Whether it be by official or covert means, culture was rallied to the cause. Musicians, artists, and authors were used as a way to project ideological messages, to prove, as it were, that one system (capitalism) was more vibrant than the other (communism). Sports could not be insulated from this ‘total war’; the Olympics could not be excluded from such a battle. Indeed, by the time of the Cold War, the Olympic Games had become the largest and most prestigious international athletic festival in the world. This made it a perfect target for exploitation.”

As preparations began for the 1952 Helsinki Games, there was a proposal by the US-backed National Committee for a Free Europe (NCFE) to allow a team of East European exiles. The Americans found a willing propagandist in the Hungarian exile Peter Zerkowitz, who claimed before the US media that the Russians would skip Helsinki because, in his opinion, they feared the US team. “The Russians are like children, they can’t stand to lose,” he said. The American media gratefully lapped it up, creating a charged atmosphere before the Games.

However, the Olympic laws did not allow exiled athletes to compete, and the US plan came unstuck. This did not discourage NCFE boss Admiral H.B. Miller, who generated fresh ideas for using the Olympics as a venue for propaganda and communicated them to Richard B. Walsh in the State Department, which is the equivalent of the foreign ministry.

Rider elaborates: “Miller suggested that members of the State Department, or other organisations, distribute brochures encouraging defection, thus arousing ‘apprehension’ in Soviet athletes, with a view to causing the Soviet secret police to double its guard. Miller reasoned that this could ‘arouse a psychological reaction in the minds of the Russian athletes” and wreck their ability to compete.

Why Putin is winning the new Cold War

The main fault of the proposal was that the Russians anticipated it. An NCFE staff member explained that “the Soviets have already provided for the possibility that we will heckle their athletes” and “each morning and evening their athletes will be flown from and to Tallinn or Leningrad so that they will only be in Helsinki when the games are actually in progress.”

In light of this intelligence, an alternative was considered, whereby athletes from the individual Soviet republics could be framed in propaganda as competing for their country, as opposed to ‘Joe Stalin’. “This will accentuate the divisive tendencies within Russia by adding fire to the nationalities’ resentment of Moscow’s rule,” it was added.

Politicians and bureaucrats are expected to play dirty. Politics and machinations are not expected from athletes themselves. At Rio 2016, American swimmer Lily King waved the finger at Russia's Yulia Efimova, bringing out the best in the social media rednecks. "Man, the Olympics are more fun when we have beef with the Russians. It's like a throwback to the 80's," tweeted one.

Russian athletes are used to such churlish behaviour from the West. Valeriy Borzov, the last white man to win the 100 metre sprint, in 1972, was described by the western media as the “Russian Robot” because he was so unflappable.

Frank Litsky of the New York Times is candid enough to admit that the American media went completely hysterical. “In the American mentality of those days, he was a Russian, he was communist, he was a bad person,” says Litsky in a television interview. “Some people thought he was a prototype, a new super athlete,” added Litsky. After all, even in victory Borzov rarely offered more than an enigmatic smile and a wave. His rivals alleged he was a product of Russian high tech.

Sports have long been used for politics and propaganda. The Roman circus, for instance, was aimed at showing the power of the emperor and keeping the restive masses in thrall. However, the injection of politics is making a mockery of the Olympic spirit. Perhaps the alternative is to delink nationality and allow participation on the basis of region or continents. There could be just five teams representing the five continents. There would still be intense competition but without the tinge of jingoistic celebrations.

It would also curb national spending on medal-rich sports at the expense of other events. It would also prevent a country like, say Britain, from spending $350 million on Olympic programme focussed on harvesting medals while at the same time hundreds of thousands of Britons are homeless and hungry. The Sochi Games, during which billions of dollars disappeared down the corruption sinkhole, would also not have been so extravagant.

Olympic sport is there to provide a platform for athletes to attain glory – and enough money to afford a secure life. It cannot be handed over to governments to showcase the superiority, or otherwise, of a system or culture.