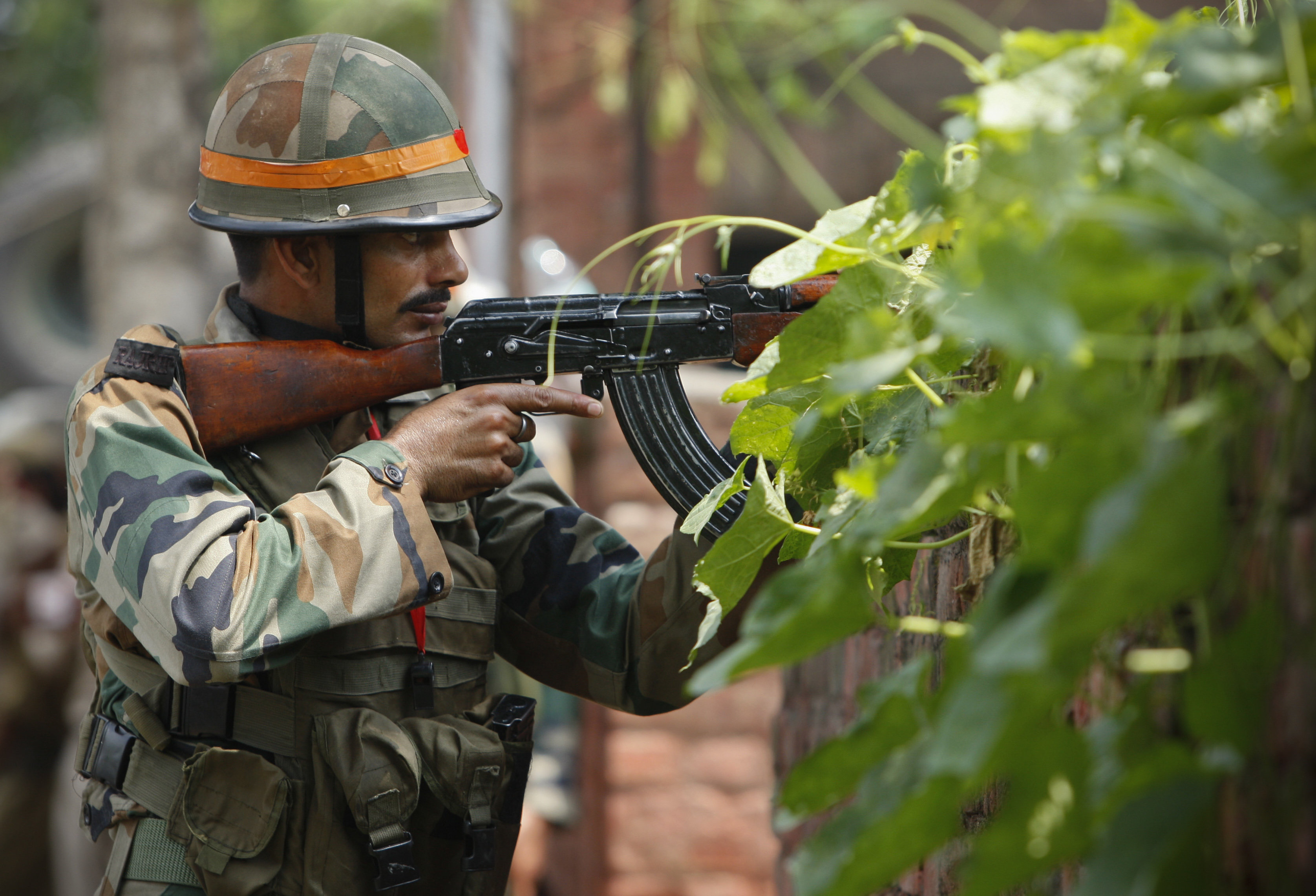 An Indian army soldier holds an AK-47 assault rifle during a fight in the town of Dinanagar, in the northern state of Punjab, India, Monday, July 27, 2015.

AP
The first article of this two-part series on Indian small arms, analyses the Indian soldier’s experience with the Kalashnikov type rifle.

This should be featured by Ripley’s Believe It Or Not: Indian scientists can develop, launch and guide a spacecraft to Mars 650 million km away, but they cannot produce a simple assault rifle that works.

The standard issue Indian Small Arms Systems (INSAS) rifle is so unreliable that both the Indian Army and counter-insurgency forces have asked for Russian replacements. In fact, Indian soldiers and police, with the tacit approval of their commanders, already use Kalashnikov rifles captured from terrorists and criminals to get the job done.

The 300,000-strong Central Reserve Police Force (CRPF) has decided to completely shun the indigenous INSAS, and wants 100 per cent of its soldiers in Maoist-infested areas to be equipped with AK-47s. According to the CRPF, while the error percentage in AK guns is 0.02 per cent, in INSAS it is 3 per cent. “We have found that our men are more confident with the AK series rifles,” said CRPF chief Dilip Trivedi.

In response to the SOS, the Indian government has imported 67,000 Kalashnikovs for the CRPF. India has spent approximately $500 million in INSAS procurement and looks like the money wasn’t well-spent.

Retired Lt Gen Syed Ata Hasnain, is also an AK admirer. The former commander of the Srinagar based 15 Corps had his encounter with the legendary Russian rifle when he rejoined his unit during Operation Pawan, in Sri Lanka. “We had a few captured 7.62 mm AK 47s which were reserved for the Ghatak platoon and for a couple of scouts while we conducted jungle bashing,” he says.

Lt Gen Hasnain adds: “The captured AK series, worn and grimy from LTTE (Tamil guerrillas) over use, carried a romantic aura about it. The greatest thing was that it could fire in automatic mode. Why is that important? In the jungle or urban terrain, response at close quarters is a recurring phenomenon. Automatic high rate of fire from a weapon with an enhanced capacity magazine has far greater chances of success, especially in the crucial two minutes of the first contact.”

The INSAS, on the other hand, has performed badly, touching its nadir in the 1999 Kargil War. The new 5.56 calibre rifle either jammed or its components would crack, said an Indian Army officer.

Also, sometimes the gun would fire in full-auto mode when the selector switch was turned to the burst mode (three shots at a time). Incredibly, it didn't have a full-auto mode. "AK rifles were hurriedly sent to the frontline," the officer adds. "The Kalashnikovs were both life-savers and face-savers for us at Kargil."

Another officer of 17 Garhwal Rifles who battled militancy in Kashmir believes the AK-47 gave him and his troops a big morale boost. "Once I was chasing a militant armed with an AK-56. That chap just ran, but kept on firing his rifle. And then my SLR jammed. I lay flat on the ground, hoping that my adversary won't stop to turn back; if he did, I would be done for. Thankfully, he never did. But others weren't that lucky. But when we got the AKs, the situation changed completely. I knew I had 30 rounds of rock and roll and no bloody militant would dare face me when my Kalashnikov opened up," he said.

Kalashnikovs to check in at Sheremetyevo Airport

Trouble-free operation and low maintenance aside, the Kalashnikov – especially the AK-47 – has another advantage. Unlike bullets fired from other rifles, its larger 7.62 mm bullet creates a mushroom-like mini blast at the entry point. This causes disruption of tissues, leading to greater trauma and blood loss.

Before the INSAS, the India soldier’s standard issue weapon was the 7.62 mm SLR. Apparently, someone decided to copy western military doctrine, according to which a rifle should incapacitate a solider instead of killing him, thus increasing the logistics burden for his mates. However, as the Indian soldier’s experiences in a wide range of conflicts have proved, a gun with a higher kill capacity is better. Bigger is always better, and the 7.62 round is deadlier than the 5.56 mm of the INSAS.

The Vietnam War was the first conflict in history in which assault rifles were used by both sides on an extensive scale.

Vietnamese soldiers were fortunate to get that era’s most advanced rifle – the AK-47. The rifle was remarkably low-maintenance, translating into better performance in Vietnam’s wet and humid environment.

There were numerous instances of American platoons losing fire-fights because of malfunctioning M16s. The situation was so dire that some Americans started picking up AK-47s that belonged to dead Vietnamese soldiers, Esquire magazine reports.

On one occasion a US sergeant carrying an AK-47 was stopped by his commander, who demanded to know why he was carrying a Russian weapon. The sergeant replied, “Because it works!”

Since corruption and kickbacks are an integral part of Indian defence imports, it wouldn’t be out of place to question why India imports knockoffs – albeit better than shoddy INSAS – from countries like Romania and Poland. Why not import directly from Russia which is the home of the Kalashnikov, and which sets the quality benchmark?

Maybe it’s easier to cover up the corruption trail when the supplier is a relatively obscure East European supplier. Or perhaps the East Europeans have piles of AK-47s mothballed after the end of the Cold War and are able to offer a discount.

Buying the cheaper version doesn’t really matter if the item is, say, a coastal patrol boat. But a rifle is a different matter. Although Mikhail Kalashnikov came up with such a fantastic design that even the Romanians can’t wreck it, there is bound to be a difference in quality between the original versus the copy.

Second tier quality for the humble soldier reeks of discrimination. If India is going in for the world’s best dogfighter – the Su-30MKI, which costs $65 million per plane – why should the Indian soldier be given a $600 Romanian copy when the Russian original costs only a couple of hundred dollars more?

The clever learn from their own mistakes. The wise learn from the mistakes of others. However, India is unique – it just refuses to learn.