Kalashnikovs to check in at Sheremetyevo Airport 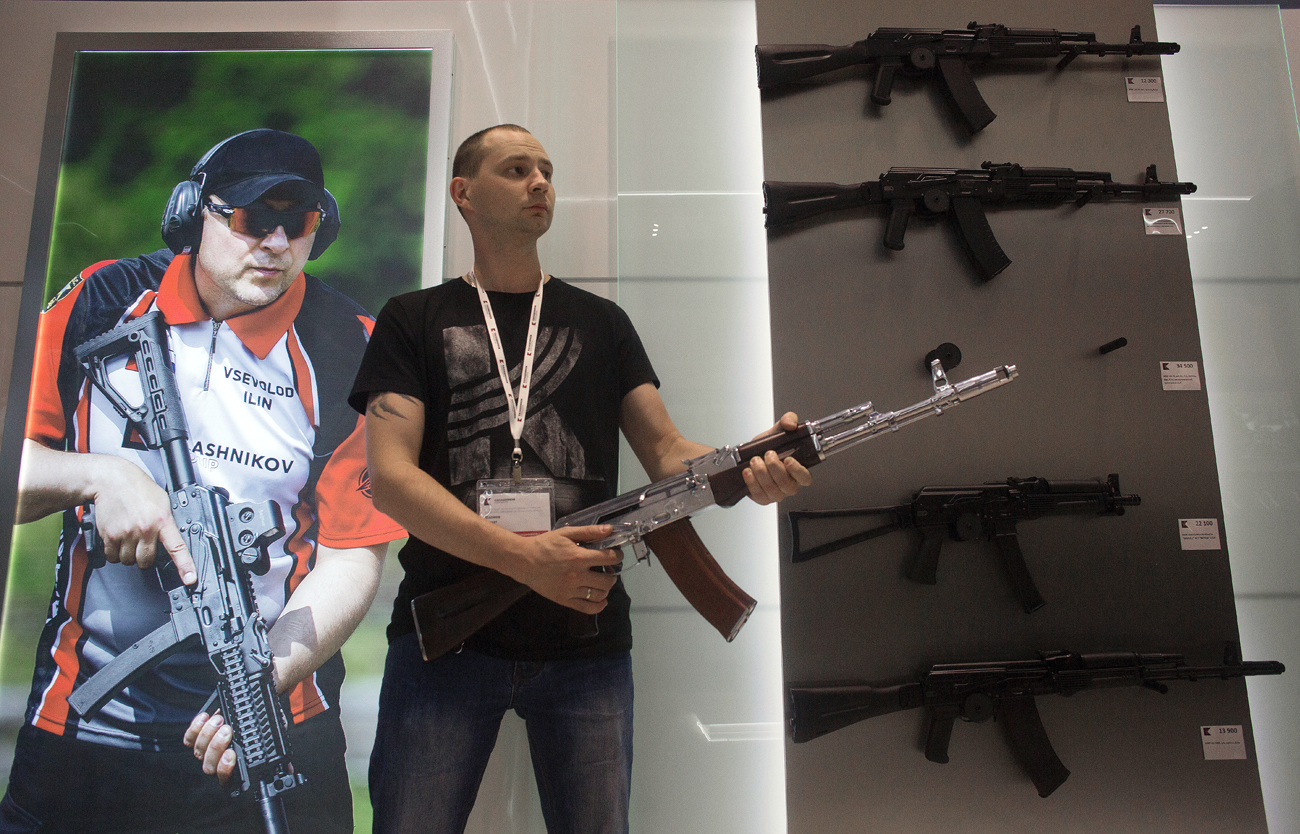 A salesclerk at a newly opened store of Concern Kalashnikov at Sheremetyevo Airport.

Iliya Pitalev / RIA Novosti
Regular souvenirs are not the only gifts to purchase at the new Kalashnikov store launched at the Sheremetyevo airport in Moscow. The iconic machine guns, which now fire only blanks, are also on sale.

Visitors to Moscow will now have a wider choice of souvenirs, other than the typical matryoshki and vodka. They can now pick up a Kalashnikov machine gun as a gift to take back; well, actually a dummy or blank-firing version. The unusual souvenir is available for sale at the new Kalashnikov Concern store at Moscow's Sheremetyevo Airport.

The first thing a customer sees when entering the store is two racks of machine guns neatly hanging on the wall.

"Dad, they're toy machine guns, right?" asks a five-year-old boy, pointing to the arsenal. "They were real, now they’re toys," responds his father. 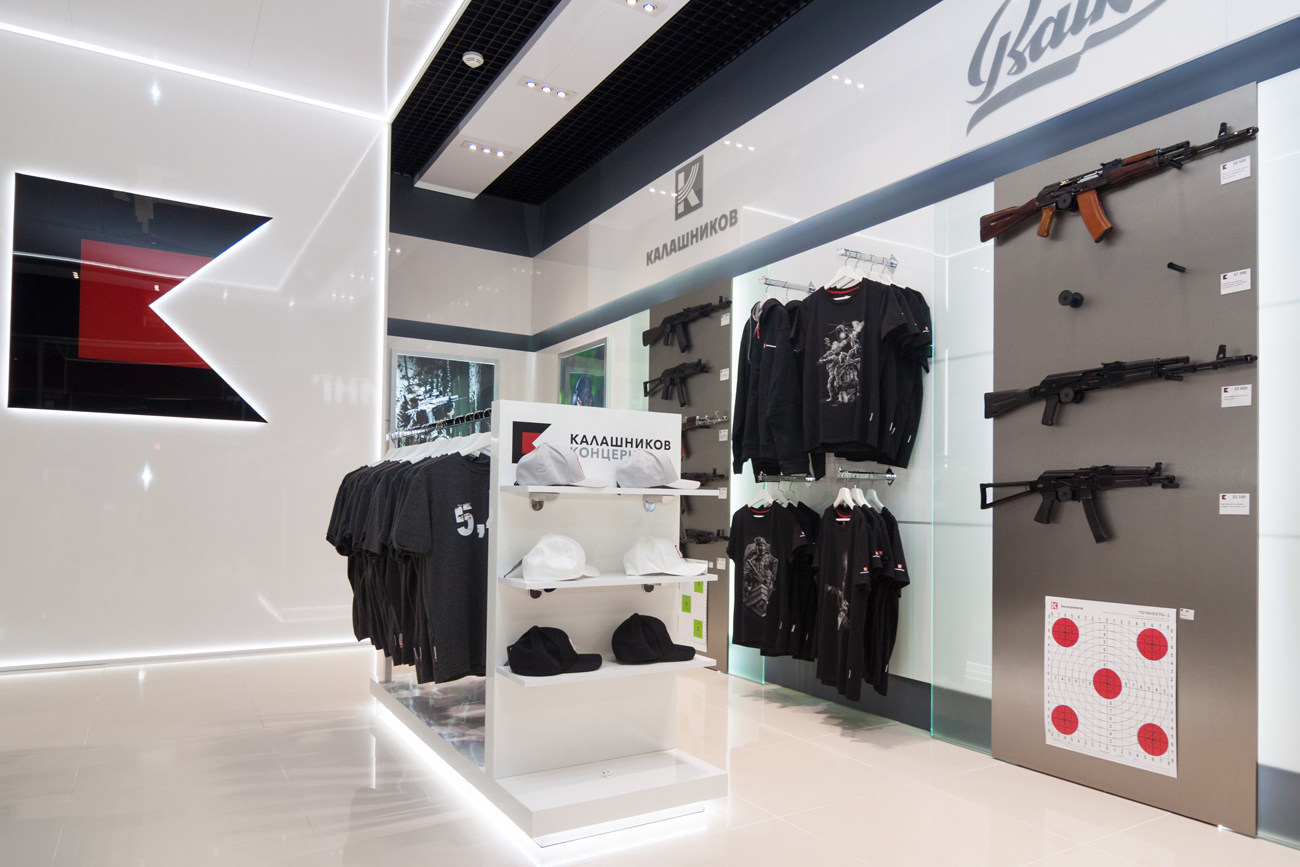 The company that made the iconic Kalashnikov machine gun opened the new store on August 16 in the pedestrian gallery linking the Aeroexpress rapid train terminal and the Moscow Sheremetyevo Airport. Other than the store, the company also has an online shop and about 30 “brand zones” (company stores) in 24 Russian cities.

"The Kalashnikov is one of the most popular brands that comes to mind when people throughout the world think of Russia. So we’re glad to offer visitors a souvenir with our company's brand," said Vladimir Dmitriyev, the company's marketing director.

The store looks like a glamorous James Bond arsenal: contemporary design, neon lighting. You can buy four machine gun models here: the AK-74, the modified AK-74M, the AK-103 and the PP-19, which the Russian police carry. They are all made with the same materials that make the original weapons, which is why they look the same and feel the same. 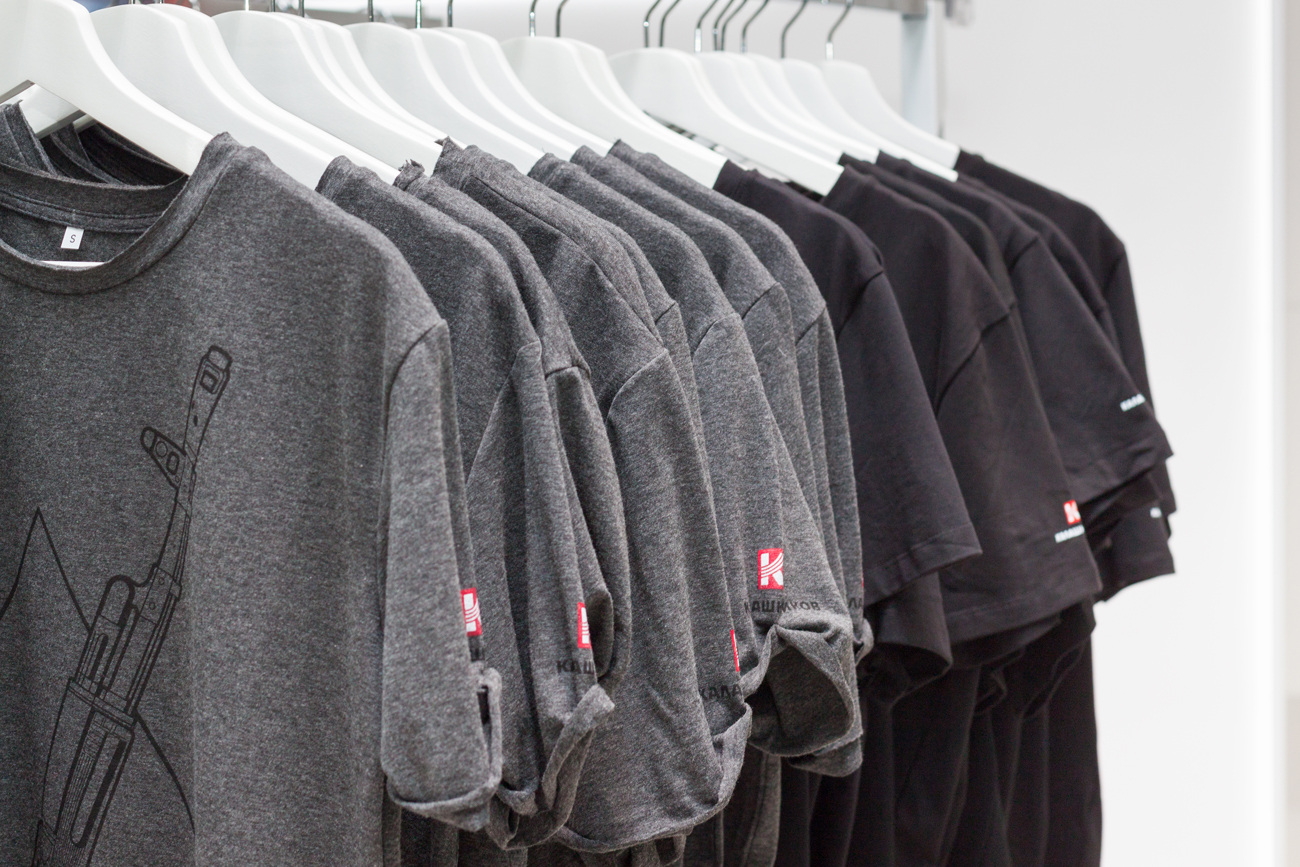 "They even smell like the real machine guns," said Artyom Baranovsky, a store salesman. The highest demand is for the AK-74 model, always used by the Russian army in films and video games.

Not only dummies but also real weapons

A lot of people enter the store just to hold the legendary machine gun and take a photo with it, but they often buy one as a souvenir from Russia. There are also more unusual clients. One of them, a former soldier, conducted a master class at the airport on how to assemble and dissemble an AK-74; a skill that takes many years to perfect in the Russian army.

For those who want more than a dummy machine gun, the store offers decommissioned weapons that fire blanks. Once these were fired by soldiers but after they were taken out of service the machine gun was reassembled. Usually the chamber is modified so that they can fire only blanks. 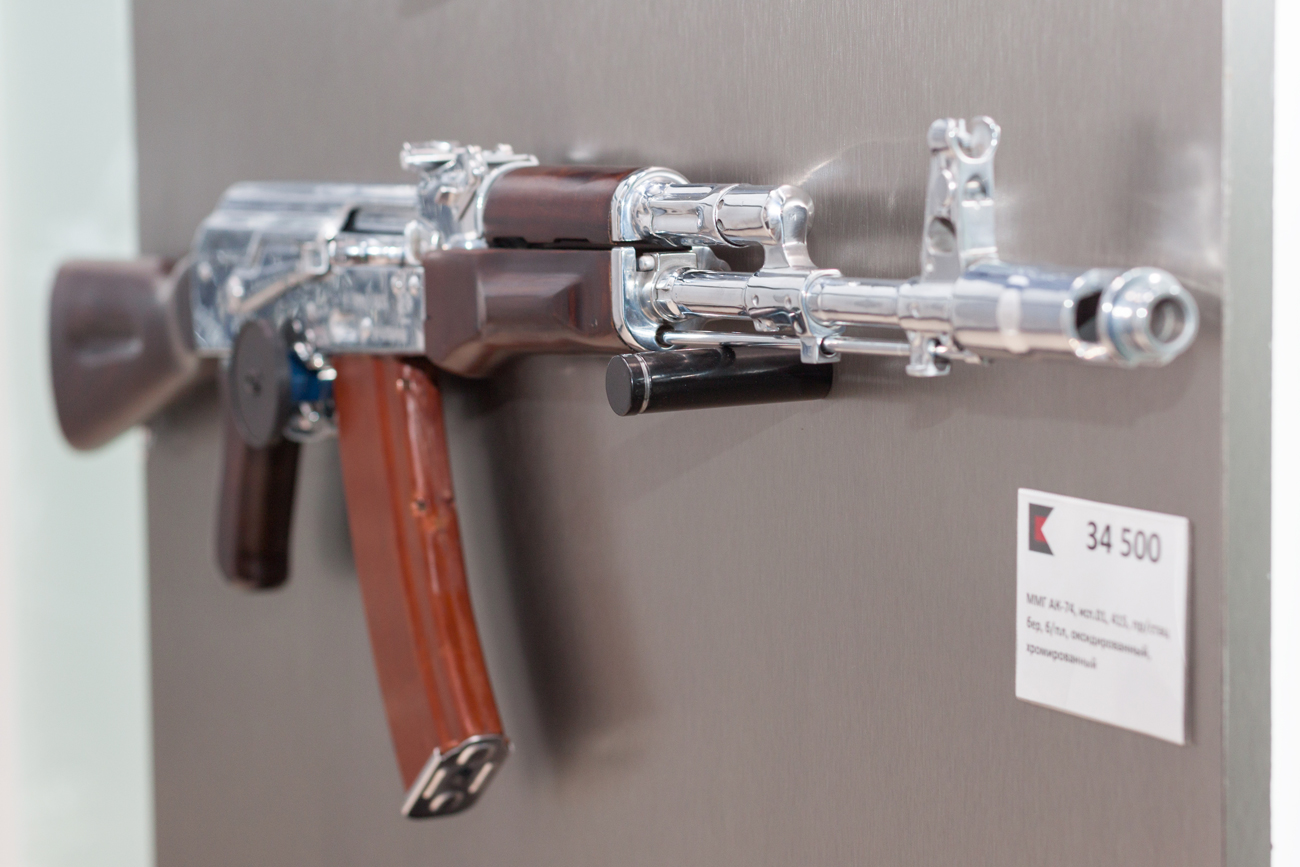 "It makes an excellent gift for those who miss the sound of a machine gun," said Baranovsky. However, ammunition, even blanks, cannot be bought in the store. Sale of any ammunition is, of course, prohibited at international airports.

An AK-74M is being wrapped up for Nikolai from Yaroslavl.

"I am a hunter and love to shoot. But I am buying the machine gun for my children and grandchildren, not for me. I won’t give them my own weapon but such a souvenir would be great for them. Let them get used to it," he said.

How much do they cost?

Anyone aged 18 years and more can buy a "Kalash." It cannot be taken on board the plane and needs to be checked in to the luggage compartment. All weapons are sold in special boxes, have identification and corresponding documents, so airport staff should not have any questions. 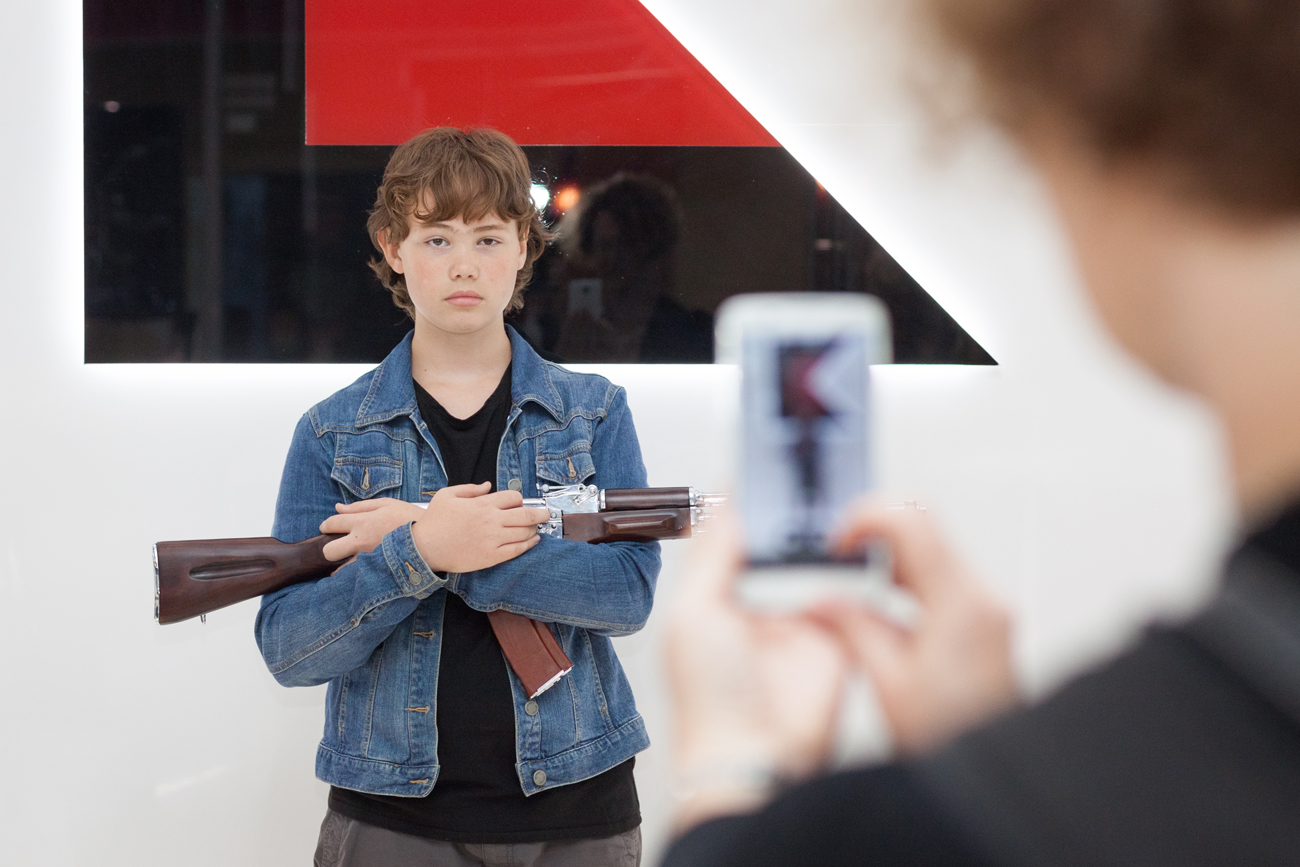 A foreigner buying a model as a souvenir should remember that upon entry to other countries it is necessary to be informed about the country's legislation on transportation and ownership of such goods.

The window displays also contain pneumatic sports guns designed for shooting at targets. Their capacity does not exceed 3 J and all you need to buy them is a passport. The Kalashnikov store also sells jerseys, pens and phone covers, as well as other souvenirs and hunting attire. All with the Kalashnikov trademark, naturally.