Sarmat: The missile that could prevent WWIII 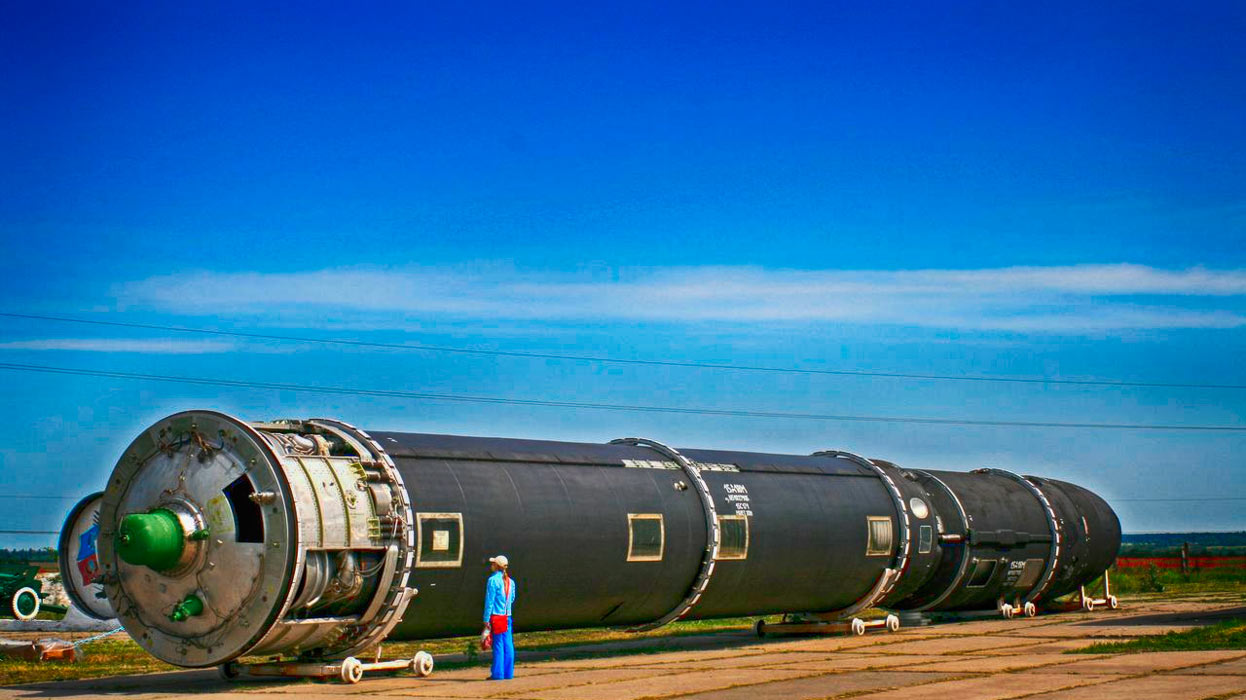 The delivery of the new missile could begin as early as 2018.

makeyev.ru
Able to wipe out an area as large as Texas or France, Russia's brand new ballistic missile will considerably improve deterrence – and check American adventurism in Moscow's backyard.

A new ballistic missile with a destructive power 2000 times greater than the atomic bombs dropped on Hiroshima and Nagasaki is being tested near the Ural Mountains before it enters service with the Russian Strategic Forces. Armed with 10 independently steerable warheads – and numerous decoys – a single RS-28 ‘Sarmat’ intercontinental ballistic missile (ICBM) can end all human life in an area as large as Texas. According to one US writer, the 100 ton behemoth makes America’s 39 ton Minuteman look like a “rocket propelled toothpick”.

Under development since 2011, the existence of the Sarmat was confirmed when the first image was declassified in October 2016. The missile is already a scare word in the western media.

Britain’s Daily Mail caused a minor panic among its British readers with an article saying that the new Russian missile would be able to destroy England and Wales at once.

The New York Post described it as the “devil in disguise".

The western media, for once, is spot on. The ‘Sarmat’ is the son of the SS-18 ‘Satan’ – the NATO codename for the nearly 50 year old RS-36, which is currently the most powerful missile in existence. The Sarmat will not only have stealth features but can travel vast distances – exceeding 11,000 km – so that it can be launched over either the North or South Poles, creating huge certainty in the enemy’s mind. These features make it an extremely useful weapon of strategic deterrence.

According to Russian Deputy Defence Minister for Armaments Yuri Borisov, the delivery of the new missile could begin as early as 2018.

Currently, the missile is undergoing the “throwing” or cold launch test. This is the first stage of missile testing during which the gigantic ‘Sarmat’ is ejected from its silo by means of compressed gas, before the rocket engine kicks in several metres above the ground. Cold launching a missile ensures that its super hot exhaust doesn’t damage the missile silo.

No such thing as too much power

The current throw weight king, the SS-18, may be a five-decade old design, but it packs a hefty punch. With a destructive power greater than a thousand Hiroshima type nukes, it can end all human life in an area as large as Britain or the state of New York. In this backdrop, the Sarmat’s vastly larger explosive power might seem like overkill. But it is not.

Russia’s arsenal of ICBMs is at present impossible for American anti-ballistic missile (ABM) systems to intercept, but in future these deadly missiles may not be invincible. Currently, strategic deterrence is based on mutually assured destruction, or MAD, where both sides know they will be destroyed in the event of a nuclear exchange. However, the US has declared its intention to nullify MAD with the Prompt Global Strike (PGS), a Pentagon project to develop a system that can deliver a precision-guided conventional weapon airstrike anywhere in the world within an hour, in a similar manner to a nuclear ICBM.

The Sarmat will serve as an effective response to PGS as well as other US missile defence deployments near Russia’s borders, such as in the Baltics, Romania, Poland and South Korea.

Borisov revealed that ‘Sarmat’ is a fifth generation weapon, with capabilities more advanced than that of previous generation ICBMs. The top speed of the missile is 6.7 km per second (approximately 25,000 km per hour), allowing it to strike targets within the continental US in less than 30 minutes. While the SS-18 can sidewind (move in a series of S-shaped curves to evade antimissile defences) only in certain stages of its flight, the new missile manoeuvres all the way so it is near impossible for missile defence systems to shoot it down.

The Sarmat’s development is happening in sync with Russia’s Project 4202, a hypersonic glide warhead project, which is expected to come online between 2020 and 2025. This means that instead of freefalling warheads that ICBMs carry, the Sarmat’s multiple warheads will accelerate to their target at speeds seven to 12 times faster than the speed of sound.

New Russian ‘Sarmat’ ICBM will be like “Son of Satan”

Quite simply, the Sarmat is Russia’s answer to the threat of missile defence systems being designed by the US to undermine the global strategic balance.

In the early part of the last century, American writer and historian Will Durant wrote: “A nation must love peace, but keep its powder dry.”

Russia may not be interested in American-style interventionist policies, but Moscow’s need for a modern military is greater than ever since the end of the Cold War. It cannot afford to ignore advances in American ABM technology even as its older missiles begin to age. Igor Sutyagin, an expert in Russian nuclear capability at the Royal United Services Institute in London, says: “The SS-18 is more than 30 years old. It is past its sell-by date. So even if you had the warmest relations in the world with NATO you would want to update your missiles. But (President Vladimir) Putin of course is happy for it to be portrayed as an aggressive move. He wants to stress his unpredictability and his importance.”

As Stephen J. Cimbala said in ‘The Russian Military into the Twenty-First Century”, during the Cold War, American leaders were “almost heroically ill-equipped” to understand Russian behaviour. In a reprise of those days, Putin has brought back unpredictability to Russian statecraft.

The Russian insistence on a potent megaton capability is a legacy of Soviet military doctrine and is well calculated. In a report for the US Army War College titled ‘The Impact of Missile Threats on the Reliability of US Overseas Bases’, Joel Wuthnow writes that missiles are attractive coercive tools for two reasons: “First, missiles can affect US political decisions by threatening, or actually creating, mass casualties abroad or in the homeland. The idea is that domestic pressures to avoid or minimise losses would cause a US president to rethink whether to employ force. Second, missiles can be leveraged against states that host US troops or states that are considering whether to grant the US access. Host nations may be coerced through the threat or reality of casualties and/or economic damage.”

For Moscow, an arsenal of ballistic missiles is critical in view of ceaseless American adventurism in Russia’s near abroad as well as other theatres. Nuclear weapons can be used to scatter NATO forces before they are able to organise themselves for an invasion of, say, Ukraine. This capability could fix high costs on US military interventions.

During a testimony to the Senate Armed Services Subcommittee on Emerging Threats and Capabilities held on March 5, 1999, former US Air Force Chief of Staff Ronald Fogleman said, “Saturation ballistic missile attacks against littoral forces, ports, storage facilities and staging areas could make it extremely costly to project US forces into a disputed theatre, much less carry out operations to defeat a well-armed aggressor. Simply the threat of such enemy missile attacks might deter US and coalition partners from responding to aggression in the first instance.”

Although the US is pumping billions into the PGS project, it could turn out to be yet another dud like Star Wars – destined to fail against a massed volley of Russian ICBMs. Christopher J. Bowie writes in ‘The Anti-Access Threat and Theatre Air Bases’ that enhancements to offensive weapons are easier to effect than corresponding upgrades in deployed defences. For instance, future missile forces may feature chaff or decoy countermeasures, and may be coated with radar-absorbing materials.

These are precisely the features Sarmat is expected to possess. Its massive throw weight could allow it to have dozens of decoy warheads – each of which US radars will have to deal with, while these radars must also track the real warheads that will be hurtling towards US and western population centres. The upshot: Sarmat will overwhelm the American defence shield.

As Bowie explains, regardless of the sophistication of a defence, an adversary armed with a given “threshold” number of missiles will possess the capability to overwhelm those defences – a concern exacerbated by the growing lethality of individual warheads. Though future active defences may not constitute a hapless and misleading “American Maginot Line”, the emerging threat will significantly “stress air defences”.

In this backdrop, the Sarmat ICBM threatens to create such a huge window of vulnerability in the West’s defences that no existing – or conceivable – missile defence shield will protect western cities. The Sarmat’s doomsday capabilities could ironically preserve the peace in the coming decades – and prevent WW III.