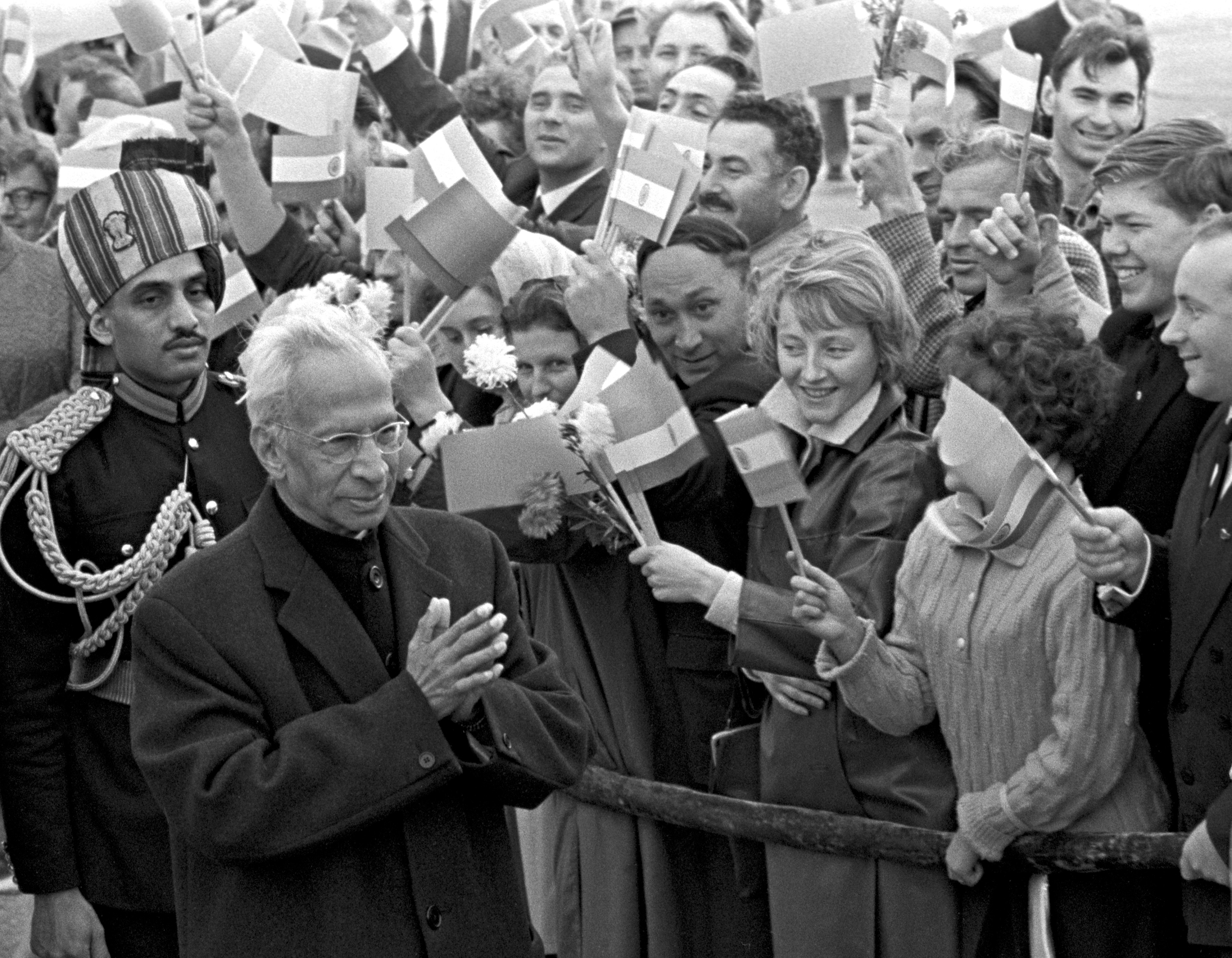 Dr. Radhakrishnan on a visit to Moscow in 1964.

Valeriy Shustov/RIA Novosti
The great statesman and philosopher was highly respected in Moscow.

Diplomatic ties between newly independent India and the USSR got off to a bad start. Unsure of whether India was really independent, as it remained a dominion of Britain in the Commonwealth, the state-controlled Russian press initially termed India as an “imperialist lackey.”

In ‘The Diplomatic Ideas and Practices of Asian States,’ Ashok Kapur wrote that Joseph Stalin refused to meet India’s first ambassador to the country, Vijaya Lakshmi Pandit (Jawaharlal Nehru’s sister). Stalin considered her arrogant and aristocratic and confined her to the Indian Embassy. This affected Pandit’s psychological wellbeing, Kapur wrote.

In 1949, Nehru decided to send renowned philosopher Dr. Sarvepalli Radhakrishnan to Moscow as India’s ambassador. In an eventful three years, Radhakrishnan managed to change the paradigm of India’s relationship with the Soviet Union.

“Radhakrishnan combined his philosophical wisdom with Chanakyan cunning diplomacy, to change the way the government in Moscow saw India,” says Ivan Griko, a historian. “Much propaganda was built around the ambassador as a man who worked tirelessly and slept just two hours a night, as he worked on his philosophical texts.” As is the case now, philosophers were widely admired in Russia in the 1940s and 50s.

In his book, Kapur wrote that Soviet government was made to believe that Radhakrishnan admired a “profound leader” like Stalin. While it was only a deputy foreign minister who accepted Radhakrishnan’s credentials, Stalin finally agreed to meet the future Indian President in January 1950.

According to a now-declassified Indian Embassy telegram (from Radhakrishnan to K.P.S Menon) that was sent after the meeting, there were signs of a thaw in bilateral ties.

“India's policy of neutrality was real and positive and in Colombo, Pandit Nehru had reaffirmed India's anxiety to avoid Cold War tactics and anti-Communist pacts,” Radakrishnan told Stalin. When told that the superpowers should look to the end the Cold War, Stalin said, it did not “depend on him alone.”

The meeting was the first real opportunity for the Russians to clear their misgivings about India. Stalin “ seemed anxious to know if she was more or less independent than, say, Canada,” the telegram read. “Ambassador explained position especially in light of India's forthcoming declaration as a Republic.”

The Soviet leader was also curious to know about Indian languages and which was the most dominant among them. “Stalin expressed satisfaction that Hindi was phonetic and not hieroglyphic as it would thus be easier to liquidate illiteracy, unlike China where even to read a newspaper it needs five years study,” Radhakrishnan wrote.  There were light-hearted moments in the meeting and Stalin even laughed when he asked the ambassador as to why Ceylon  (Sri Lanka) was not a part of India.

Besides the political developments, Stalin was happy to know that India was serious about carrying out land reforms.

In his book, Kapur wrote that Radhakrishnan also informed Stalin of Nehru’s socialist leanings and his support for the leftist Spanish government during the country’s civil war.

The ambassador told Stalin that India considered the USSR an Asian power and wanted it to be involved in peace initiatives in the East.

“As the relationship developed in the two and a half years that Radhakrishnan was ambassador, the USSR sent wheat and other food aid to India,” Griko says.  “India’s neutral position in the Korean War also helped endear it with the USSR.”

In April 1952, three days before Radhakrishnan was about to return to India, he met Stalin again. The meeting reflected the changed thinking in Moscow when it came to India.

When thanked by Radhakrishnan for Soviet help to India, Stalin said, “There is nothing to be grateful about. We have only fulfilled our duty.” The Indian ambassador replied that many countries did not have a proper conception of their duty, nor did they discharge it, when they had.

Stalin agreed to recall the TASS correspondent in Delhi, who according to Nehru was unfair and highly critical of the Indian government. “Ambassador said that his own anxiety was that the good relations and friendship that we had built up here in Moscow should not be spoilt by Soviet representatives in India saying things which offend our national dignity,” an Indian Embassy telegram sent after the meeting read.

During his meeting with the Soviet leader, Radhakrishnan articulated the principles that would guide Indian foreign policy.  “We are not with America and we are not with any power,” Radhakrishnan told Stalin. “We act according to our sense of right and do not yield to any political or economic pressure.”

Stalin’s attitude towards Nehru had also changed by then. “Both you and Mr. Nehru are persons whom we do not consider to be our enemies,” he told Radhakrishan. “This will continue to be our policy and you can count on our help.”

Stalin then went on to talk about how the USSR believed in equality of all races. “Our people have been educated in the equal treatment of Asian people…The United States and Britain look on Asian peoples as backward and look down upon them. We treat all Asians as equals. It is this, which helps us to conduct a correct policy. The Americans and the British treat them supercilously [sic]. Our policy helps us to have very different relations with the Asian peoples.”

According to the telegram, “The Generalissimo spoke these sentences slowly, deliberately and with obvious feelings.”

Indo-Russian ties witnessed a rapid growth after Nikita Khrushchev and Nicholai Bulganin visited India in 1955. By then, Dr. Radhakrishnan was Vice President of India and would go on to become President. Indo-Russian ties have been built on the foundation that was set when he was India’s ambassador in Moscow.