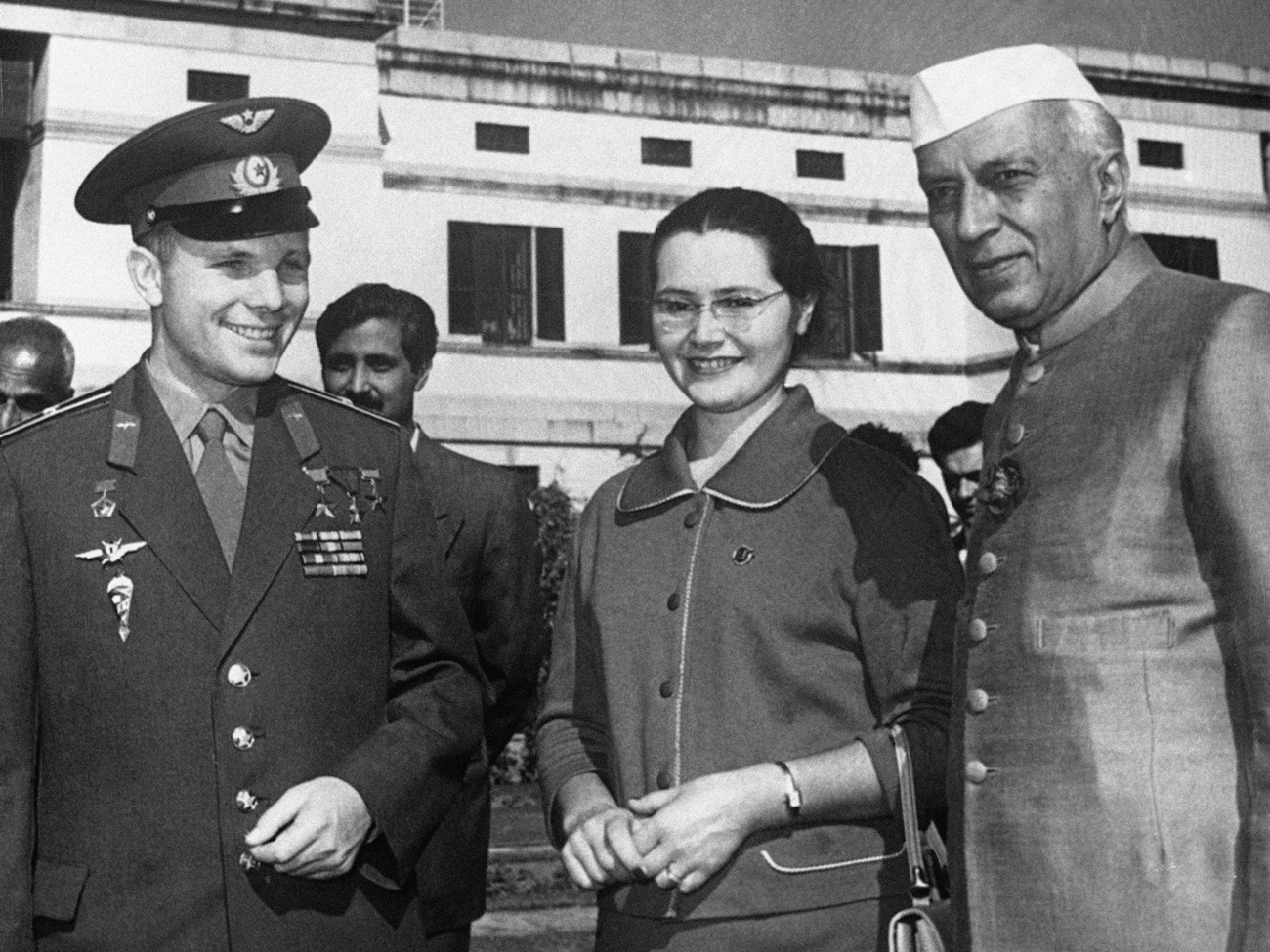 Yuri Gagarin, his wife Valentina Goryacheva and Jawaharlal Nehru, during a meeting at D. Nehru's residence.

RIA Novosti
The first man to travel to space spent eight days in India in 1961. During those exhausting days, Gagarin met Jawaharlal Nehru, addressed a huge gathering in Mumbai’s Shivaji Park and received a raucous welcome from an adulating public across India.

On November 29, 1961, seven and a half months after he made history by becoming the first man to travel to outer space, Yuri Gagarin visited India.  While crowds had already thronged to see the cosmonaut in places such as the UK, Cuba and Brazil, accounts suggest that the largest numbers turned up in Indian cities. This was before the television age, so a lot of people felt it worth their time to try and even get a glimpse of their hero.

“I was 12 years old at that time and I remember not sleeping before the night Gagarin would hold a rally at Shivaji Park,” says Ramesh Borkar, who attended the event. “Gagarin spoke in Russia and there was a simultaneous translation. I wasn’t even this excited when Indian won the (cricket) World Cup in 1983.”

Others at the rally recalled the cosmonaut’s attire and charisma.

“He was wearing his uniform and was handsome, humble and friendly,” Prakash Reddy, who was 10 at that time, told the Hindustan Times. And the atmosphere on the ground was magnetic.”

Reddy, who went to become the secretary of the Communist Party of India in Mumbai, added, “This was a different kind of achievement by a communist state for mankind and the whole world.”

Before coming to Mumbai, the cosmonaut was entertained by Jawaharlal Nehru, India’s first prime minister. A British Movietone newsreel showed a smiling Gagarin applauding to the crowd that was waiting at the airport for him. He was presented with bouquets in Russian style and garlanded in Indian style on arrival. Even Soviet schoolchildren were part of the crowd at the airport in Delhi.

The newsreel shows Gagarin’s wife Valentina Goryacheva who accompanied him on the Asian tour that also included Sri Lanka and Afghanistan. Nehru entertained the couple at his Teen Murthi residence, attended a rally and major cultural program and also joined them on an open-air motorcade through Rajpath. Gagarin was shown snake charmers but he apparently did not see any elephants on his trip.

It was the adulation from the Indian public that Gagarin seemed to appreciate the most. “Thousands of people greeted Gagarin warmly,” Nikolai Kamanin, a Russian aviator and war hero who accompanied the cosmonaut on the trip, wrote. “I was reminded of my naïve childhood impression of Christ meeting his people. He needed a miracle with five thousand loaves and fishes, but our Gagarin satisfied the people’s hunger with his appearance alone.”

Kamanin wrote that he had anticipated that Gagarin would become world famous, but added that he could have “never predicted the scale of the clamour.”

During the trip, which was full of official engagements and functions, the cosmonaut also visited Lucknow and Hyderabad. The fact that he’d been on display for months was starting to take a toll on Gagarin after a while. One Russian author claimed that humidity and 40 degree heat exhausted the cosmonaut, but it’s hard to imagine that anyplace in India could have been that hot in the first week of December. There were just too many expectations placed on Gagarin.

After eight days in India, the cosmonaut left for Ceylon, as Sri Lanka was officially called then. “By 9th December, 1961, Gagarin, Valya (short for Valentina) and the accompanying entourage were in Colombo, Ceylon,” Kamanin wrote in his diary. “Gagarin told me that he was ‘close to wearing out.’ The Soviet ambassador in Colombo insisted on his making as many appearances as possible.”

On a sharply critical note, Kamanin added: “They’re doing their best to squeeze the maximum possible use of Gagarin to make the government look good. They have no interest in how all this affects him.”

After Sri Lanka, Gagarin and his entourage went to Afghanistan before going home. He would keep travelling over the next few years but the intensity of the trips abroad reduced. On March 27, 1968, Gagarin and his flying instructor died when the MiG15UTI they were flying crashed. He was just 34.

“Gagarin became an instant hero with his space flight, but his trip to India made many in my generation identify with him personally,” Ramesh Borkar adds. “I personally knew of three people who named their sons Gagarin in the 1960s. Such was the legend of the man and the way he touched people, that his surname became a first name in India.”

The Russian cosmonaut foresaw the two countries collaborating in space in the future.

“I think that sometime Soviet and Indian cosmonauts will research unexplored expanses of space together,” Gagarin said during an official meeting in Delhi.  Two decades later, Rakesh Sharma became the first Indian to enter outer space when he joined commander Yuri Malyshev and flight engineer Gennady Strekalov on the Soyuz T-11 spacecraft.

While the Indian space program has grown leaps and bounds over the last three decades, this remains an extremely important sector for bilateral cooperation between the countries.