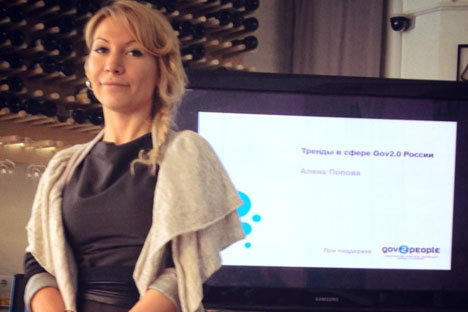 Gov2People was launched in February 2011 as the brainchild of Alyona Popova, a Russian public activist and expert on e-government and startup businesses. Source: Courtesy of Gov2People

Gov2People started as a blog about the world’s most successful projects in e-government and civic accountability. The project’s founders are now working on helping young Russian startups raise awareness and investments. Some experts believe the project is good for beginning activists, while others criticize it for being aimed more at investments than civil society.

Civic activism is on the rise in Russia. A wave of protests in the winter of 2011 and the spring of 2012 has pushed many people (not all of which are necessarily opposition-minded) to take action. Citizens have realized that achieving change in certain areas is totally possible, if they just show some initiative.

The goal of Gov2People is to bring such civic initiatives together under a single directory: the service provides informational and PR support; it also helps with raising investment for developers of websites and applications that monitor the activities of government officials and offer more effective solutions to specific social problems.

“The policy of ‘baby steps’ is a leading trend in modern Russian society,” says Olga Suvorova, head of the Gov2People center for civic initiatives. “Websites and mobile apps that help people deal with everyday problems – from cleaning the courtyards of their apartment building to avoiding getting stuck in horrendous traffic jams – are springing up in Russia every day. Many people have no idea what to do when a rubbish tip pops up next to a playschool or industrial waste is regularly dumped into a river near their country house. Websites for such civic projects will offer you a complaint form and even forward it on your behalf to the municipal authority in charge. And they will also follow up on whether your problem has been resolved.”

Naturally, there are still problems: the lack of transparency and red tape at the local government level prevent citizens from exercising real control over municipalities; money for promoting civic initiatives is also lacking.

Gov2People was launched in February 2011 as the brainchild of Alyona Popova, a Russian public activist and expert on e-government and startup businesses.

“We started out as a blog about Russian and international initiatives on civic accountability, e-government and other social services,” says Suvorova.

Dnevnik.ru: It solutions for schools

However, the project founders decided to go beyond simply educating people. The Gov2People project now incorporates more than 100 startups that it actively promotes. These include services to resolve issues with utilities, programs for recruiting and training emergency rescue volunteers, facilities to raise money for a wide variety of purposes, databases on Russian lawyers and judges, and environmental “watchdogs.”

“Our ‘charges’ include both very young startups and some well-established ones,” says Suvorova. “For instance, the RosYama project, which specializes in resolving social and everyday problems, has already proven its effectiveness by successfully working with government officials in different Russian cities. The Dnevnik.ru educational portal has been awarded several prestigious prizes.

“People don’t really develop civic projects to make money. The people who come up with them are fed up with seeing the same picture every day – a government that doesn’t fight corruption, or local authorities that don’t repair roads. Our goal is to turn civic initiatives into a business so that folks are not working on enthusiasm alone and understand that they are building a project,” Suvorova says.

Igor Barinov, CEO of mobile app developer Hint Solutions, believes that Gov2People is a good starting point for those who are only beginning to dabble in civic initiatives. Political and social projects cannot be profitable off-the-bat, by definition. Still, getting on a directory such as Gov2People increases the chances of being discovered. “Once you get your name out there, you can make money off of it in other, business-oriented projects,” says Barinov.

Ivan Begtin, an expert on projects in the area of open government, is not so optimistic about the outlook for Gov2People. “Gov2People has what in my view is a hopeless format that is totally geared towards searching for projects to invest in and to sell – but definitely not towards civil society,” he says.

Nonetheless, the enthusiasm of Gov2People founders is bolstered by purely practical considerations: the project’s business model has been generating income, mainly from contracts with local authorities to arrange bids for selecting software developers. “The Code4Russia contest that took place in Perm in June 2012 was a complete success,” says Suvorova.

Code4Russia is a good example of how the government could benefit from the potential offered by talented software developers. Gov2People assembled several teams of programmers to develop a tourism and travel game app for Android and iOS, in order to present Perm’s attractions in an interesting and engaging way. As a result, two winners – app developers Route59 and Creative Painting Perm – shared a 1-million-ruble (around $30,000) cash prize.

“This is a win-win arrangement,” says Suvorova. “The government can choose the best product out of several options, the developers get paid well for their effort (as well as receiving the necessary PR) and Gov2People establishes itself as an intermediary between the authorities and developers of socially important IT solutions.”