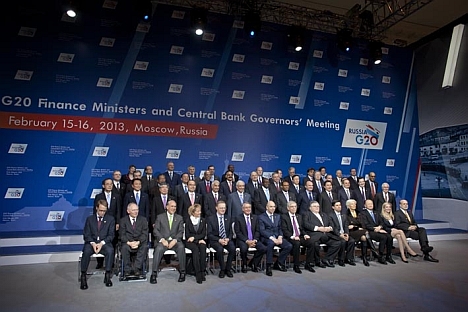 Finance ministers, high-level advisers, and representatives from prominent international economic institutions met in Moscow to analyze the best course of action for dealing with current threats to the global economy.

It appears the pessimism that characterized the Los Cabos G-20 summit in Mexico has yet to dissipate. During the group’s most recent meeting, held at the Ritz Carlton in Moscow on Feb. 15, heads of the Central Banks of various countries repeated the mantra: “We’ve made mistakes in the past.”

Most proposals regarding how to rectify the problems threatening the global financial system, which has been embroiled in a severe crisis for half a decade, revolved around a common theme. As is often the case in such complicated matters, however, more questions than answers were generated.

The Russian government offered the G20 three innovative proposals for improving the outlook of the global economy: growth through employment and investment, increased confidence and transparency, and an effective means of regulating the financial and monetary system. Reactions from those in attendance in Moscow varied.

The U.S. Department of the Treasury, represented by Lael Brainard, recommended a focus on structural reform, strict control of the public deficit, and effective and efficient regulation of fiscal policy.

The most optimistic view was that presented by Russia, calling for a unified front to resolve the crisis by implementing comprehensive measures. To quote Russian Finance Minister Anton Siluanov, “now is the time to enact global measures and abandon the traditional reliance on exclusively domestic resolutions.”

The threat of a currency war

One of the most anticipated topics of this meeting was what many have termed the “currency war.” Several countries have accused the U.S. and Japan of devaluing their currencies in order to promote exports at this particularly difficult time for the global economy. However, Christine Lagarde, director of the International Monetary Fund, has repeatedly denied these accusations at several high-level meetings.

Nikolai Kosov, president of the International Investment Bank, called upon international news outlets to offer unbiased coverage and avoid unnecessarily exaggerating negative stories about Russia. “This tactic destroys confidence and chases away investors,” said Kosov. His comments hint at a possible media confrontation. He noted that, as a financial powerhouse, Moscow boasts one of the three strongest emerging markets, based on technical achievements alone.

Kosov also highlighted the need to include countries traditionally excluded from the system — like Cuba, Vietnam, North Korea, and Mongolia — in order to improve the quality of life in those countries. This call to action is part of the alternative globalization movement and is in line with Russia’s interest in combating global inequality.

Former Russian Finance Minister Alexei Kudrin offered his analysis of the country’s recent economic history, to illustrate how a grave crisis — such as the one currently being faced — may be successfully overcome. He drew parallels with the economic crisis that threatened the newly formed Russian Federation in the 1990s, placing particular emphasis on the miraculous recovery of Russia’s economy in 2000.

Kudrin argued that, despite the global crisis, Russia’s economy is quite strong: the public deficit is effectively zero, and the country currently boasts an enviously large surplus. “We have an impressive national reserve that offers us considerable security during this crisis,” said the former finance minister.

Discussion of Moscow’s position as an international financial center gave way to concrete proposals for improving the city’s transportation system in order to combat one of the biggest challenges facing local authorities: car traffic.

The Russian Federation presented its plans for improving infrastructure during the conference on sustainable economy and its impact on the environment. Finance Minister Anton Siluanov noted that Russia has a lot of work to do on changing people’s attitudes on this topic, referring to the challenges of encouraging the use of public transportation in a global city like Moscow.

One of the main goals of the Moscow G-20 meeting was to find ways to encourage transparency and combat tax evasion. This is particularly important, considering companies like Apple and Starbucks are involved in global transactions that, through legal means, allow them to avoid taxes.

A Dose of Reality

Ersin Özince, director of Türkiye Is Bankasi, argued that the group has to be cautious, “because no market is 100-percent secure.” That is, due to the intrinsic volubility underlying all markets, risk cannot be completely eliminated from the global financial system, which is, by definition, uncertain. Özince also mentioned that some countries invest nearly 30 percent of their GDP to finance the market system.

Pier Carlo Padoan, secretary general of the Organization for Economic Cooperation and Development (OECD), also noted that the “death of the markets” as the world knew them before the crisis began is a new international phenomenon. Padoan closed by warning of the risk of unsustainable consumerism: “Debt has its own implications, but there are also contextual aspects to consider.”