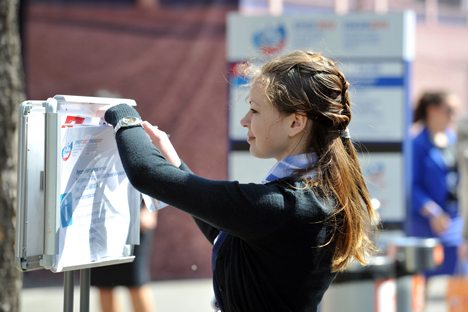 The organizers of the St. Petersburg International Economic Forum are forced to limit attendance as its popularity soars.

Demand for attending the forum far exceeds the capacity of the Lenexpo exhibition center where it is held, so the organizers have endeavored to limit participation to top company executives, Dmitry Mikhailov, senior deputy director of the St. Petersburg International Economic Forum Foundation, explains.

He notes that the higher admission prices are to deter companies from registering big delegations.

Dmitry Morozov, co-owner of the pharmaceuticals developer and manufacturer Biocad, believes hiking the admission fee is wrong. The more people who attend the forum, the better, because this is not a club for the select few, says Morozov.

On the other hand, the organizers will need to expand the infrastructure some time down the road, because interest in the forum is rising by the year, according to the Biocad executive.

GMR Planeta Gostepriimstva is sending four people to the forum and does not plan to reduce this number, according to its president, Merab Yelashvili.

He believes the price hike will not affect the attendance at all, as this is a useful venue that hosts several important events in the space of three days — something no Moscow-based forum can match.

The prestige of the SPIEF and the lack of an alternative venue for domestic and foreign investors in Russia will continue to sustain a strong interest in it from major players and market leaders; this is unlikely to change this year, despite a higher participation fee, says Nikolai Kazansky, CEO of Colliers International.

The SPIEF will take place on June 20–22, 2013. The General Partners include Rosneft, Sberbank, Gazprom, Vnesheconombank and Russian Networks.

Gazprom will spend 29.8 million rubles ($945,000), including VAT, on building its stand at SPIEF 2013, the gas company stated. The stand will occupy an area of 2,690 square feet near the middle entrance to the 7th Lenexpo pavilion.

Similar spaces have been allotted to the forum’s other strategic and general partners: Rosneft, Sberbank and Russian Networks.

SPIEF 2013 will be organized around the following basic pillars: The Global Growth Agenda, Russia’s New Horizons, and New Catalysts to Change. Since Russia holds the G-20 Presidency this year, SPIEF will host a G-20 Summit as well.

As of April 25, there were 1,361 confirmed guests for participation in SPIEF 2013, including chief executives of more than 158 major international companies and 325 Russian companies, reported Mikhailov.

Without disclosing the numbers, he added that the forum’s budget was equal to last year’s.

In 2011, the forum’s budget was 880 million rubles. Mikhailov revealed that SPIEF 2013 expects around 4,000 participants and 1,000 journalists. Sixty contractors will supply the forum.

The SPIEF’s problem with lack of space will be resolved over the next few years. In 2013, the forum will take place for the last time at the Lenexpo exhibition on Vasilyevsky Island. In 2014, it will move to a new, billion-dollar exhibition center in the Pushkin suburb of St. Petersburg.

The new exhibition center will be built by Expoforum, a company affiliated with Gazprom. The center will feature 1.5 million square feet of indoor and outdoor exhibition space, a congress center accommodating up to 7,000 people (with a main hall for 3,000 and a gala hall for 2,000), two upscale hotels and a business center.

Between 50 percent and 70 percent of the rooms at the Courtyard by Marriott St. Petersburg Vasilyevsky and the Renaissance St. Petersburg Baltic hotels have been booked for the duration of the forum, according to a Marriott spokesperson.

Based on materials from Vedomosti.