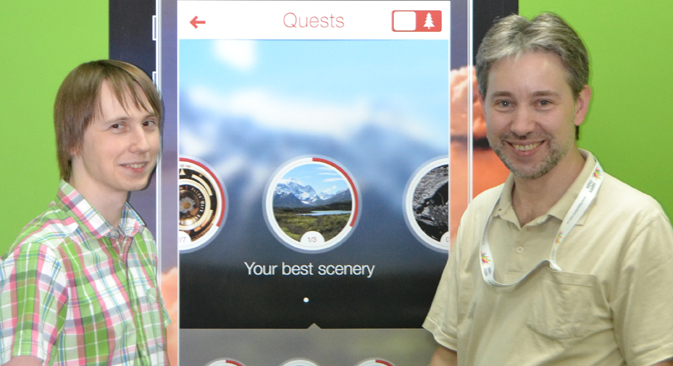 Asavkin and Smetanin are creating the Photozeen together and get help from freelancers, who consult the creators. Source: Press photo

Every day, 300 million new photos are loaded onto Facebook; Instagram users publish 58 pictures each second. Not uploading what you had for lunch or the thousandth image of your favorite cat in the social network has become almost indecent. However, most users do not really care about what, and with what kind of optical exposure they shoot.

The Photozeen project focuses on specifically that amateur with a smartphone subset of photography. The project came from Dmitry Smetanin and Mikhail Asavkin discussing a photo contest organized by Dmitry for promotional purposes.

After studying the market for the contest, the partners found that mobile photography contests are, though not widespread, out there, but no one has yet invented an application that would help people learn how to shoot well.

And so the Photozeen project was born – a mobile application that proposes to users the carrying out of simple quests, to rate each other’s pictures and thus improve their shooting skills.

They decided to start with an application for iOS. The field offered few competitors, especially those who would go into direct competition with Photozeen. Before Photozeen's launch smartphones only offered books for download, which lacked interaction, and instead demanded a lot of canonical reading and viewing of patterns.

Online and off-line courses offered an alternative to the books, albeit an expensive one.

Photozeen implemented a different and more fun way of teaching, based on gamification (the use of game mechanics in a non-game process). The user is offered quests, simple tasks, in the course of which he or she takes pictures. After that, the novice mobile photographer exhibits these before the public.

Thus, the basic skills in shooting, building composition, light, bringing ideas into the picture are acquired. All quests are given with examples of good photos. A competitive element is created with the help of the system of badges and ratings. In addition, users can buy additional features for virtual currency obtained through completing quests.

The application has a simple and clear layout. It features a section for best community photos, a leader board with weekly and overall ratings of the best photographers, a section for quests specific to the skills one wishes to improve upon, a user profile tied to popular social networks and a bank for virtual currency and purchases.

Currently the application does not have separate ratings for photos taken by smartphones versus those taken by cameras. In the same manner there is no distinction made between amateurs and professionals, and photos using special editing software are grouped with those that don't.

Competing in an environment where there's a large gap in skills and tools may put people off from participating altogether.

Smetanin and Asavkin are creating the Photozeen together. They get help from freelancers, including a developer, a designer, and a photographer who consult the creators. They finance the project themselves too.

Recently, the creators of Photozeen have become residents of the Ukrainian-American Business Incubator – Happy Farm, from which they have received some financial support. Now they are actively searching for investors.

The founders plan to break even in the project within one year. Photozeen plans to use the freemium model (the application itself is free, but additional options need to be purchased). The main bets are placed on the activation of additional services.

For example, to find out who has rated his or her picture, the user will have to pay, as well as for ensuring that the image made by him or her is more often shared by users in social networks. Protection by copyright, or watermarks, and a number of other options must be paid for.

This model has already been launched in a test version, and some users have already gotten used to paying for expanded functionality.

There are also plans to attract advertisers. Photozeen may be of interest for them as a platform for holding branded contests, because the application is just perfect for this kind of competition between users. The already existing integration with social networks – Facebook and Vkontakte can serve the same goal.

As of today, Photozeen has more than 7,000 users who carry out the quests proposed by the project. In October, Smetanin and Asavkin plan to release the application for Android and thus increase the user base. The application is also expected to be made compatible with Twitter soon.