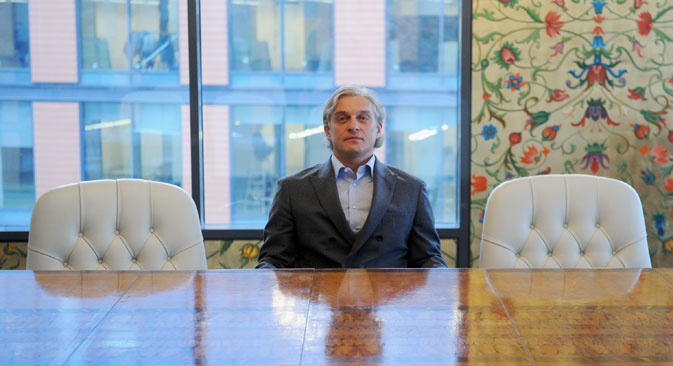 A former policeman became an overnight hero to thousands of Russian banking customers after rewriting the terms of a credit card contract to include unlimited credit and no interest…and getting the bank to sign it.

The story began in 2008. Former police officer Dmitry Agarkov, who was in his late 30s at the time, was living in the central Russian city of Voronezh when he received a routine credit card offer in the mail. The terms didn’t suit him, but instead of throwing out the contract, he scanned it into his computer, changed the conditions and sent it back to the issuing bank, Tinkoff Credit Systems.

Agarkov’s version of the contract had a 0 percent interest rate, no fees and no credit limit. Agarkov also wrote into the contract the right to fine the bank 3 million rubles (approx. $90,000) each time it failed to comply with his rules and another 6 million ($180,000) for cancelling the contract. The bank’s employees, apparently failing to read the

Five years later, in 2013, Tinkoff Credit Systems instigated a claim for unpaid debt against Agarkov for unpaid debt. Agarkov fought the claim on the strength of his contract. “They signed the documents without looking. That’s what borrowers usually say in court: ‘I didn’t read it,’” Agarkov’s lawyer, Dmitry Mikhlevich, told business daily Kommersant. “[Agarkov] could afford to buy an island somewhere in Malaysia and the bank would have to pay for it by law,” he said.

The former cop became an overnight hero and celebrity for thousands of Russians duped into paying exorbitant fees on unpaid credit due to the notorious small print included in contracts.

When a judge sided with Agarkov and declared the contract to be legally binding, requiring Agarkov to pay only the outstanding balance of 19,000 rubles, or just over $600), things began to get ugly.

Agarkov sought to recover the full 24 million rubles ($800,000) he believed the bank owed him, while billionaire Oleg Tinkoff, founder of Tinkoff Credit Systems, wrote on his Twitter account: “Our lawyers think he is going to get not 24m, but really 4 years in prison for fraud. Now it’s a matter of principle.”

The law in the situation is unclear, according to Robert Gurdyumov, a senior associate at Hellevig, Klein & Usov in Moscow.

“Formally, the conditions of the contact have to be accepted in the form they were signed by both parties. In other words, if a bank accepts a client’s terms, it can’t refuse to abide by them later,” Gurdyumov said.

“On the other hand, such agreements between individuals and banks are considered contracts of adhesion under Article 428 of the Russian Civil Code, which means they can only be changed by one of the sides with a formal addendum after the original has been signed. In civil cases like these, courts tend to side with the individual rather than the bank as the more vulnerable side. But if it can be proven that Mr. Agarkov intentionally tried to break the law by forging the bank’s documents, he could lose the case.”

“It’s important to note that such cases are being examined by courts of general jurisdiction, not arbitrage, which means that witness testimony can carry weight in addition to signed documents. The key question is whether the bank could prove its point by having its employee testify that he or she didn’t read the terms clearly enough despite this being part of the job. Probably not,” Gurdyumov said.

In the end the case was settled outside of court. Said Tinkoff Credit Systems President Oliver Hughes in a statement: “This conflict is not constructive, so we decided to end it in a gentlemanly manner and drop all the charges on both sides. We agree with Dmitry that banks need to do a better job explaining their terms of service to clients. We are working to increase financial literacy, provide clients with all of the important information and sound advice on using credit card.”

As if to show there are no hard feelings, Agarkov still uses Tinkoff for his banking services. “Since Dmitry doesn’t always like credit cards, we issued him a Tinkoff Black debit card…for which the bank pays 10 percent annual dividends on the balance and offers up to 30 percent cash back on some purchases,” Hughes added.

Russia to build first high-speed railway with funding from Beijing