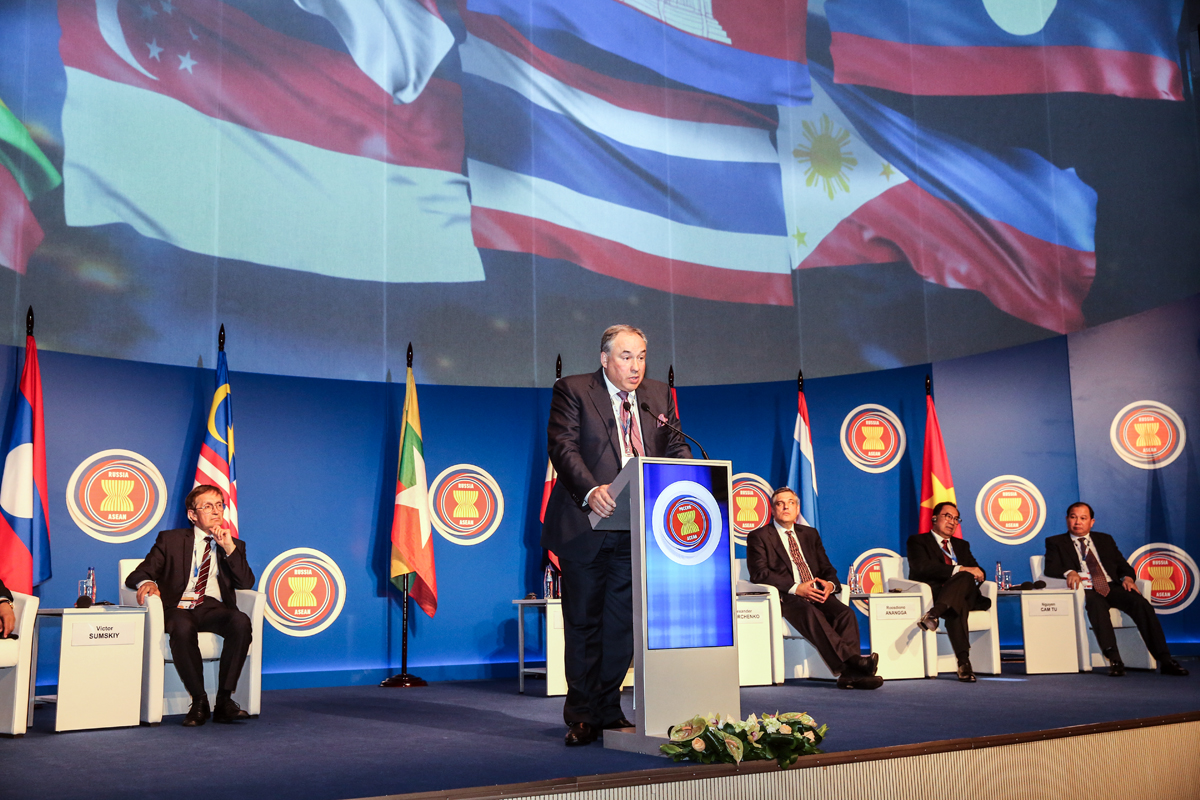 Press Photo
In an exclusive interview with RBTH, Mikhail Kuritsyn, CEO of the Russian-Indonesian Business Council, talks about the plans for the countries to use national currencies in trade settlements, upcoming bilateral business projects, and developments that rarely make newspaper headlines.

Russian Ministers often talk about the transition to payments in national currencies when it comes to trade with Indonesia. Is there any business logic behind this?

The transition to payments in national currencies is a very complicated topic, which requires the preservation of market pricing models. And market-oriented pricing is now pegged to world currencies – the dollar, euro, pound and Swiss franc.

In the case of the ruble and the rupiah, the transition to direct settlements will take a long time. For this we have a few suggestions. For example, we may fix prices in dollars or euros, but the actual transactions will be conducted in national currencies. This will keep the link to the world markets and help to make direct payments, not via U.S. banks.

If it's so difficult, why even speak about the necessity of the transition?

In the first place, because the payments are now made in dollars through American banks. And then there is the American system of Swift. That is, even if the payments are between the two Indonesian banks in rupiah in Indonesia, all information across the Swift system goes to the U.S. And this can be their competitive advantage.

Do the Russian and Indonesian governments discuss this issue?

We discuss these issues with each other and the operators involved. We have support and understanding from the Indonesian side.

This issue is also related to the desire of Indonesia to implement the so-called counter-trade transactions. It is not barter, but a kind of funding of parallel trade flows. For example, we supply equipment to Indonesia and we understand that Indonesia would buy more if we take the products of these companies as a partial payment. In this area, transition to the national currencies is more realistic and simpler.

Are there other obstacles to the development of economic relations?

The obstacles are more internal than international. Yes, of course, geography complicates logistics, but the main thing is the lack of experience and adequate knowledge about each other. Our experience shows that most of the companies that were able to overcome an initial lack of understanding of the Indonesian market continue to operate successfully.

What are the keys to growth in Russia-Indonesia economic ties?

In my opinion, in the coming years, the key to the growth is not traditional trade, but the participation of the Russian and Indonesian companies in investment projects.

For example, now we are talking about the construction of a number of railways in Indonesia, which involves Russian Railways and a private Russian group. We talk about the construction of large industrial projects, like refineries for the processing of mineral ores, and smelters for non-ferrous metals production. We are talking about companies such as RUSAL, Vostokugol, Sibirsky antratsit, and Vi-Holding.

For the construction of these projects and upon their completion there will be a need for the supply of Russian equipment, industrial materials and supplies (rails, for example). There will be a need for supportive infrastructure and related industries. For example, metal production is only possible with the support of energy production. This is an opportunity for Russian companies to participate in the construction of plants for the production of ferronickel, alumina and manganese, and at the same time for the supply of power generation equipment.

What are the chances of Rosatom’s success in Indonesia?

Rosatom offers the most advanced new generation reactors. We hope that the negotiations will be successful. It usually takes many years to make things happen, however, there is a factor that may speed up the decision of Indonesian side.

Power has become a limiting factor in the development of the Indonesian economy. If the country does not receive an additional 35,000 megawatts of power generating capacity in the next few years, its economic growth rate will considerably slow down.

Burning of oil is expensive and the use of gas requires the construction of additional infrastructure, which is also expensive, especially in the archipelago country. Coal is polluting. Renewable energy is still very expensive and even with a government subsidy it won’t not be able to match the current shortage of energy production.

Therefore, nuclear energy is unavoidable and will be used by Indonesia.  It's only a matter of time and the choice of a reliable supplier.

How do you assess the potential of the project where Rosneft will build an oil refinery on the island of Java?

The agreement has been signed. Prior to this, support was received from the government of Indonesia and President Joko Widodo during his personal meeting with Igor Sechin at a Russia-ASEAN forum. In my opinion, this is a very promising project and if it takes place, for which there is every reason, then it may become the largest project of bilateral cooperation. The first stage of the project is estimated to cost more than $10 billion. The second stage is expected to cost as much.

Will it use Russian raw materials?

This is a commercial project, so the supply of raw materials will be determined from the point of view of efficiency, economy, and technology. The crude may come from Russia, Iran, the Middle East or elsewhere... But at this stage Russia's willingness to provide a joint project with its oil is one of the competitive advantages.

Your company GeoSpectrum has been operating in Indonesia since the early 1990s and processes data from satellites. Can you tell us more about this?

We are not developers and owners of the satellites. We buy and download space data from existing Russian, American, European, Indian satellites and know how to interpret it for different industries.

The data is used for geological surveys, ecological monitoring, forest fire fighting and prevention of smuggling and human trafficking, as well as industrial construction and tracking of mobile objects.