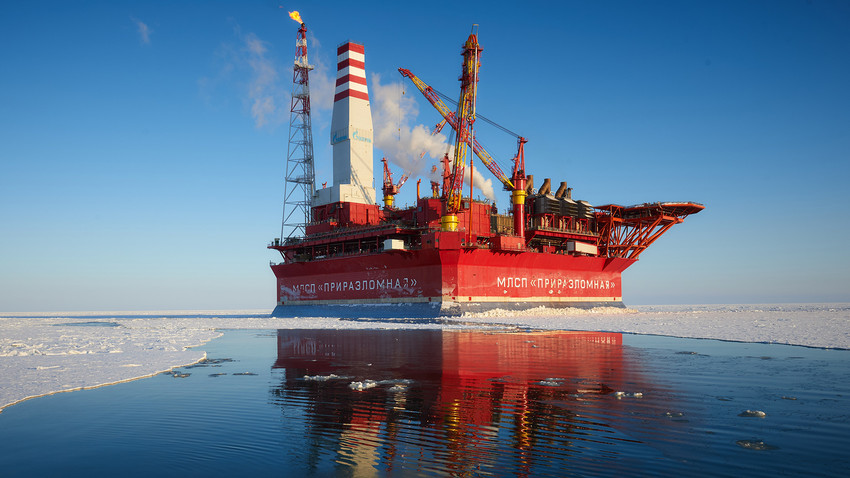 Alexei Danichev/Sputnik
Energy resources traditionally make up a substantial part of Russia’s export revenues. But what part of its oil and natural gas does Russia consume domestically and is it working on developing renewable energy resources?

1. How much energy does Russia produce?

The official statistics from the Ministry of Energy show that in 2018 Russia pumped nearly 556 million tons of crude oil (including gas condensate)  - a record in the last 30 years and close to the all-time maximum of 569.4 million tons back in 1987. Last year, the country also produced 725.4 billion cubic meters of natural gas, 439.3 million tons of coal and 1.092 trillion kWh of electricity.

To put this into perspective, according to Tatiana Mitrova, Head of Energy Center at the Moscow School of Management Skolkovo, such production volumes make Russia the third largest producer of energy after the United States and China. “We provide 10 percent of global primary energy production... And 16 percent of the whole global energy trade is provided by Russia. It’s really the biggest one if you put together different energy sources,” she said speaking at the UNICON 2019 Directors Conference in Moscow on April 24. 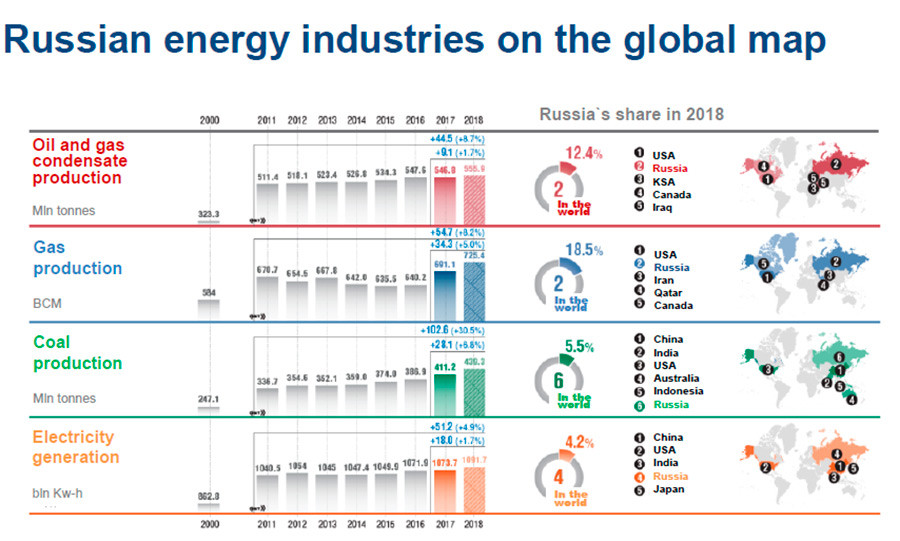 2. How much of it does Russia consume domestically?

Out of 556 million tons of crude oil that Russia produced in 2018 - 409.3 million tons were exported. The large outflux is because the country’s domestic consumption of oil has gradually been decreasing over the last 20 years: since 1990 exports of oil have climbed from 47.7 percent to 73.6 percent of total oil production. This is largely due to oil consumption being substituted by the increased consumption of natural gas. However, Russia remains the fourth largest energy consumer in the world with 5 percent share of global consumption.

“52 percent of total primary energy consumption is provided by natural gas which is the fossil fuel that produces the lowest amount of carbon gas emissions,” Mitrova explains. “There is quite a good percentage of nuclear and hydro energy, as well as small shares of other renewables, like solar and wind. But hydro is quite important.” 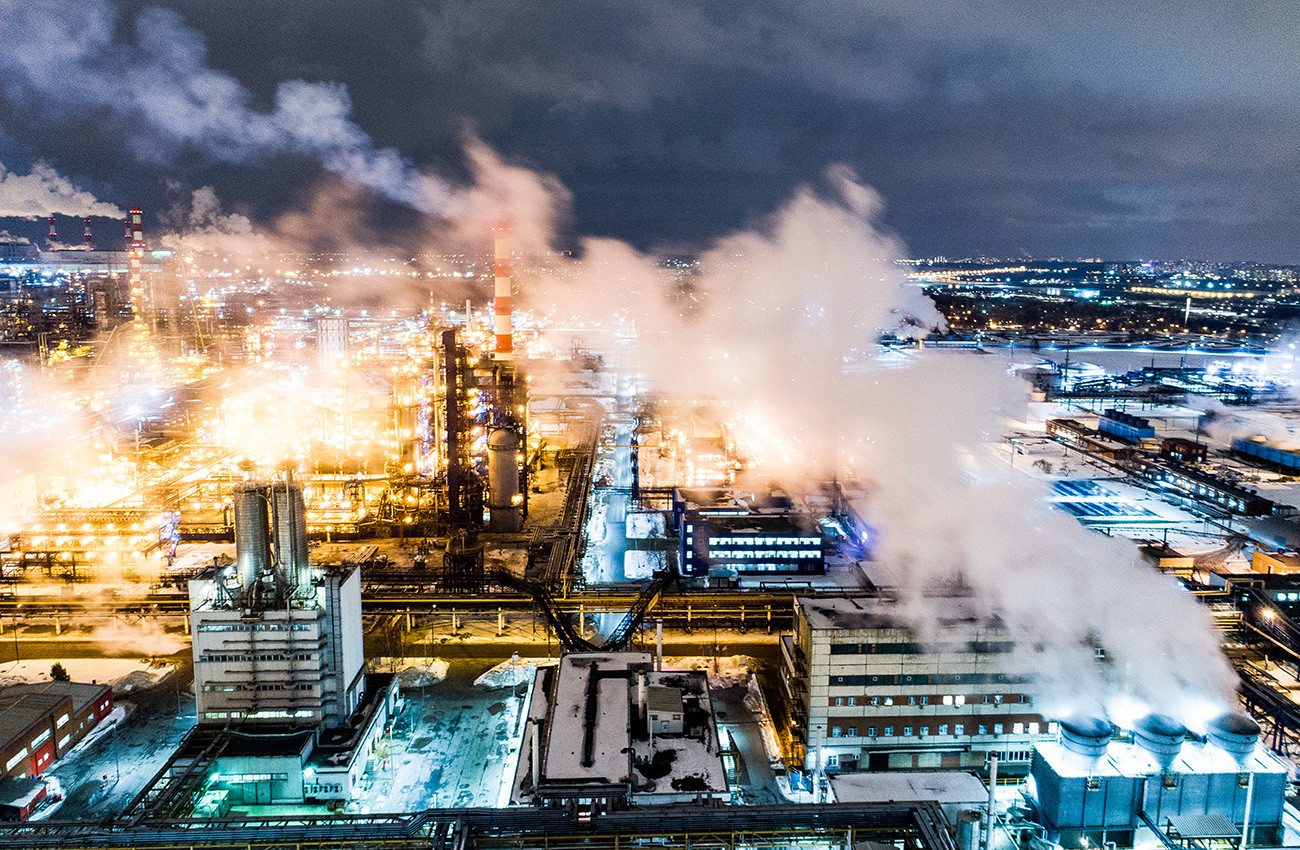 According to BP, in 2017 natural gas provided for 52.3 percent domestic consumption followed by oil (nearly 22 percent) and coal (13 percent). Renewables were the fastest-growing fuel but contributed only 0.04 percent to Russia’s primary energy consumption; in comparison, nuclear accounted for 6.6 percent.

3. Which countries are the main consumers of Russian energy?

According to Russian Vedomosti, oil exports have been largely refocusing from European to Asian consumers, with considerable volumes going to China. According to reports, in 2018 Russia supplied 71.5 million tons of oil products to China (a 20 percent increase from 2017). 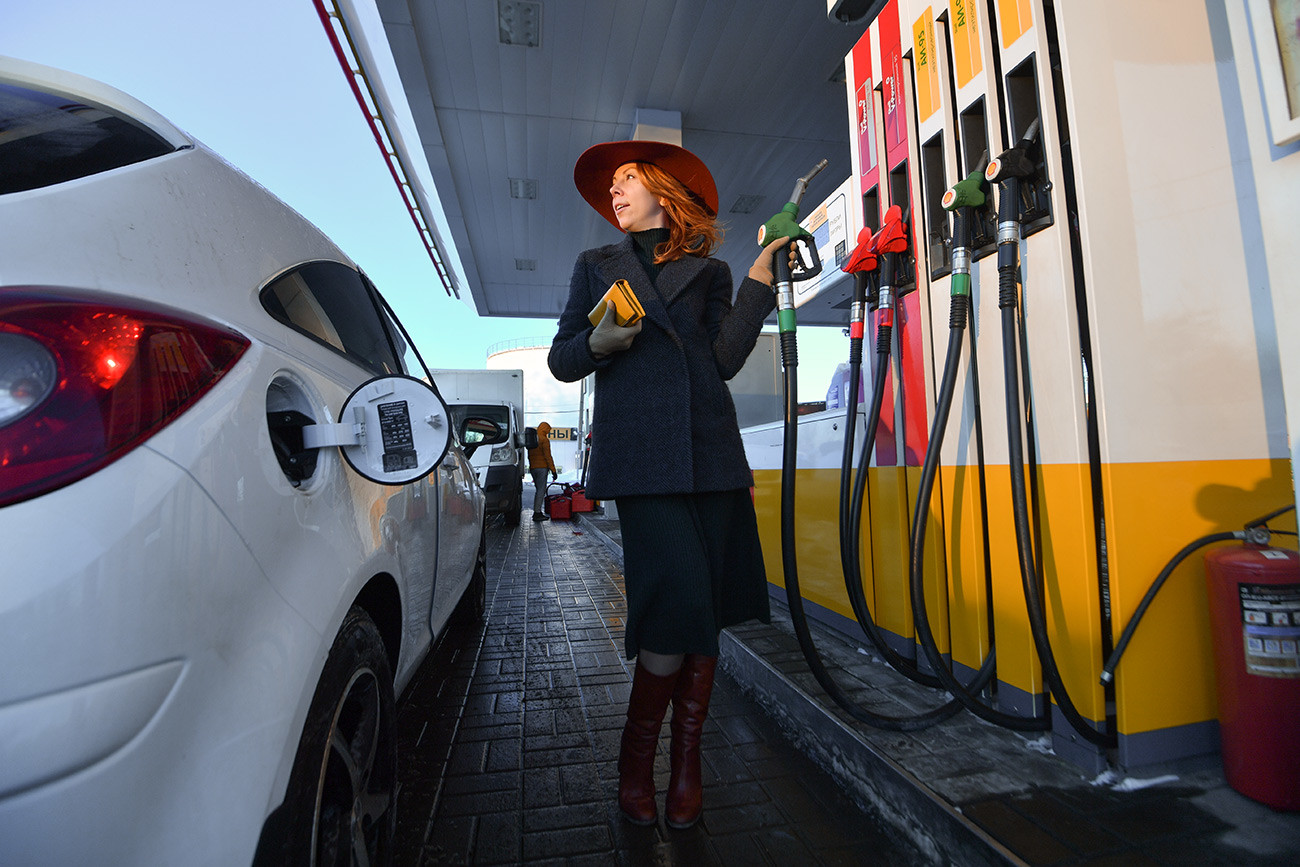 What’s also interesting is that the U.S. has increasingly been buying Russian oil to make up for lost deliveries from sanctions-hit Venezuela and supply cuts by OPEC members. Just in the first half of May, 13 ships from Russia delivered 5 million barrels of crude oil and oil products to the U.S. For all of 2018, shipments were about 137 million, according to EIA data.

In addition, China and Russia have agreed on an annual supply of 1.3 trillion cubic meters of gas as soon as the Power of Siberia pipeline is operational. 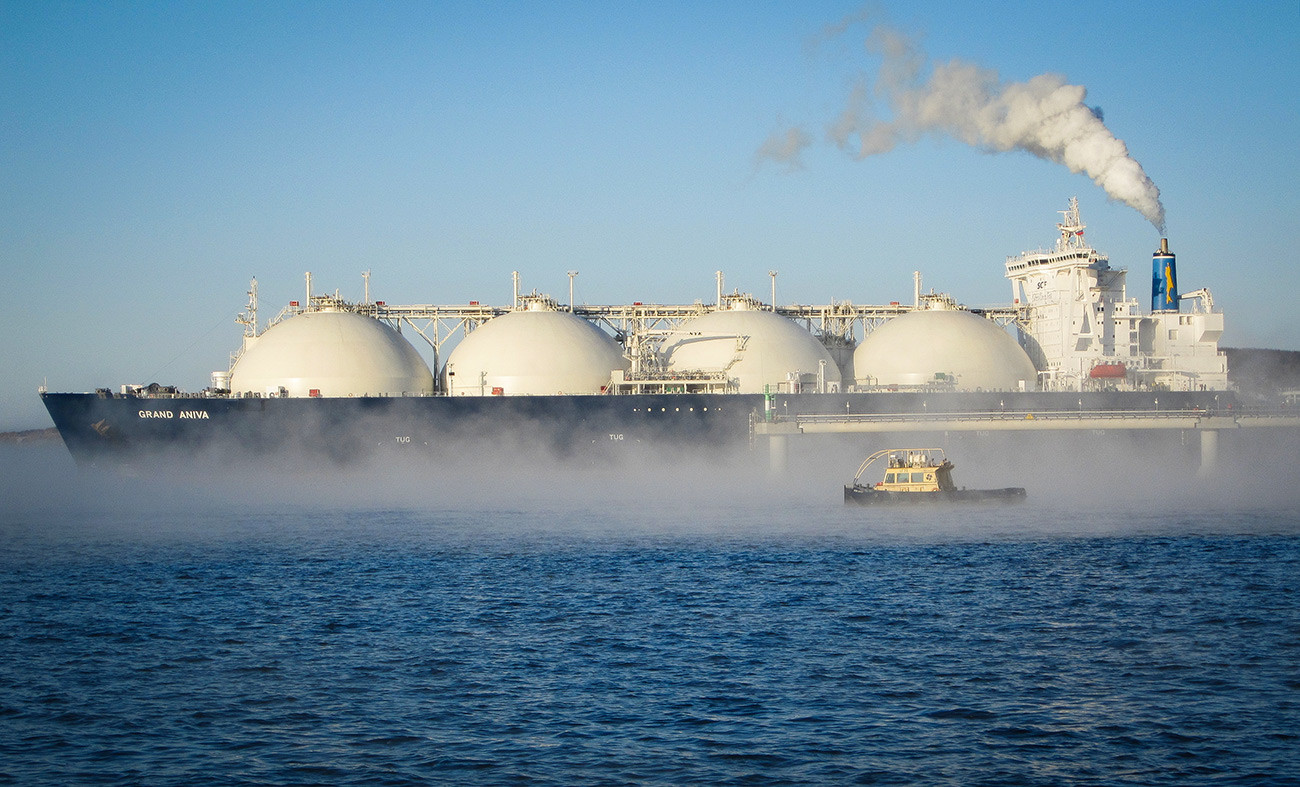 Russian LNG (liquefied natural gas), in turn, made up 5.8 percent of all energy exports and primarily went to Japan, South Korea, and Taiwan - as reported by the International Group of LNG Importers (GIIGNL).

Yes. According to Mitrova, Russia is gradually investing in renewables by trying to localize equipment and obtain necessary competencies. Authorities are trying to create conditions for renewables to become economically competitive in particular locations.

“This is what the Russian government is trying to do with wind and solar [energy] right now. They’ve created a special tariff and are supporting it over other types of power generation. They aim to localize equipment production here in Russia and achieve large scale production, which will allow the energy to be sold at a lower price,” she says. 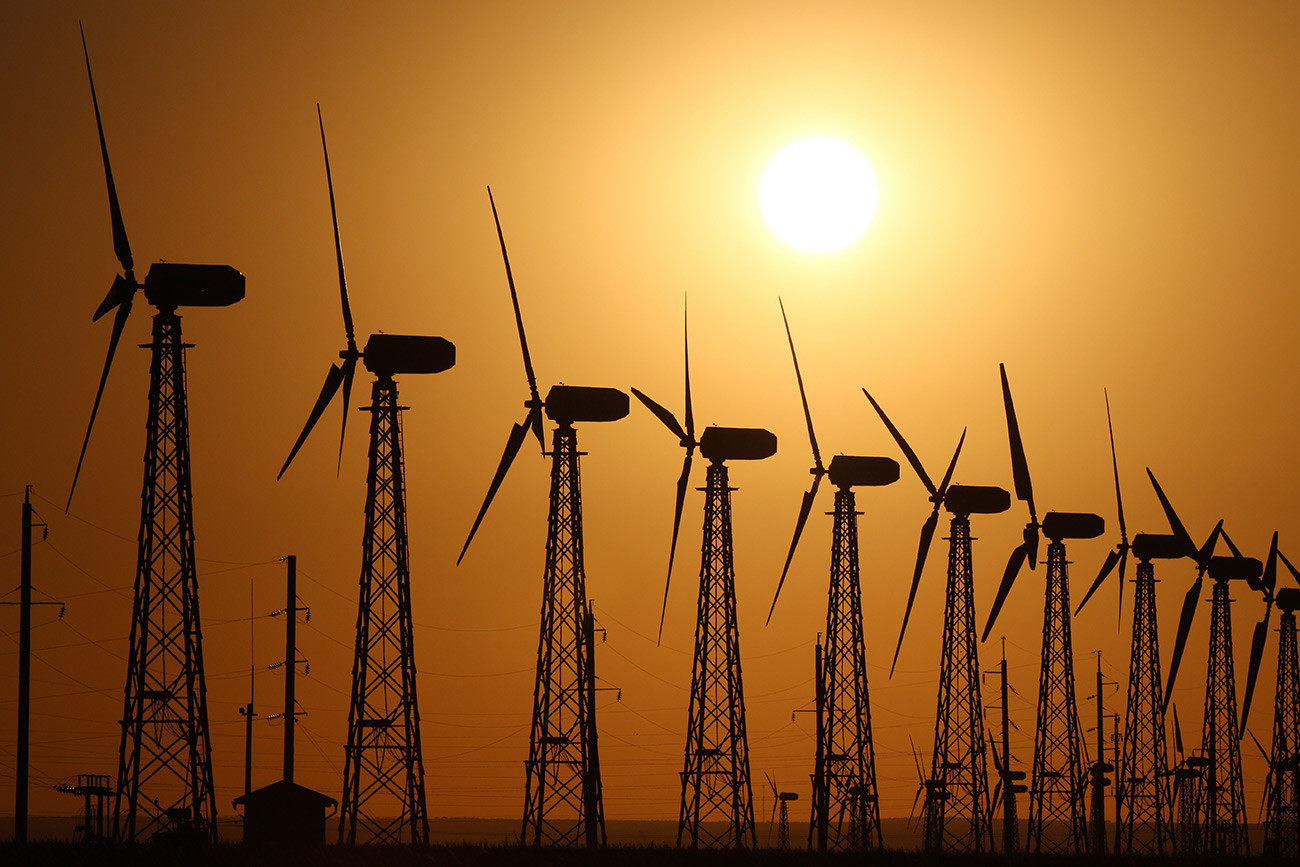 “After the necessary framework is created and initial investments in R&D are made, after the gray zones in regulation and smaller obstacles which are poisoning the life of companies developing renewables are removed,  the state can step back and let the industry develop independently,” she says. “But this is only on the horizon in 10-15 years. After grid parity has more or less been achieved and new energy sources can compete. Then let the market work. In Russia the situation is aggravated by the heritage of state planning and strong centralization of the energy sector.”

One of the first positive examples of renewables pushing their way onto the market is of Russian company RusHydro that has launched a 900-kilowatt wind power plant in an Arctic settlement in the Yakutia region of Russia's Far East.