Why the Russian Navy built 'round' ships in Crimea 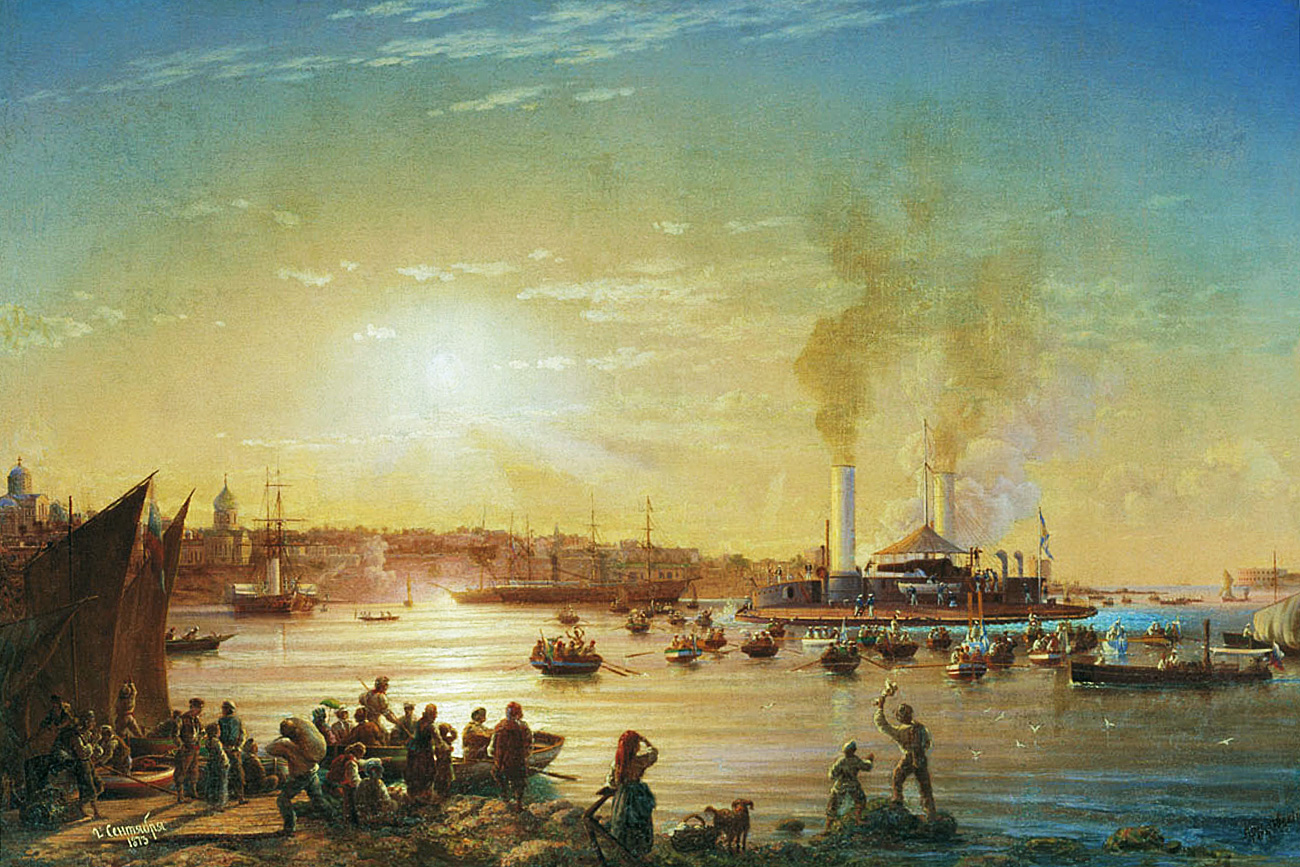 "By 1871 a program designed to create coastal defenses in Crimea, which would not be affected by the pact, was already in full swing."

N.P.Krasovskii
At the end of the 19th century the first and last 'round' battleships in the history of Russia appeared on the Black Sea. They were known as Popovkas.

In accordance with the 1856 Treaty of Paris, which formalized Russia's defeat in the Crimean War, Moscow was forbidden to deploy its fleet in the Black Sea. This did not fully suit the imperial government and by 1871 (the moment the agreement was denounced and Russia was given back its right to keep ships on the Black Sea) a program designed to create coastal defenses in Crimea, which would not be affected by the pact, was already in full swing.

"Thus, the authorities decided to build 'ships not from wood.' The draught of such a floating object had to be 3.3 meters and the guns had to have a caliber of at least 280 mm. One of the most important criteria of these ships was the armor - more than on the foreign vessels," explained former editor-in-chief of the Voenno-promyshlenny kurier newspaper Mikhail Khodaryonok.

The only vessels that met these criteria were the round battleships designed by Admiral Andrei Popov, hence the nickname Popovkas. 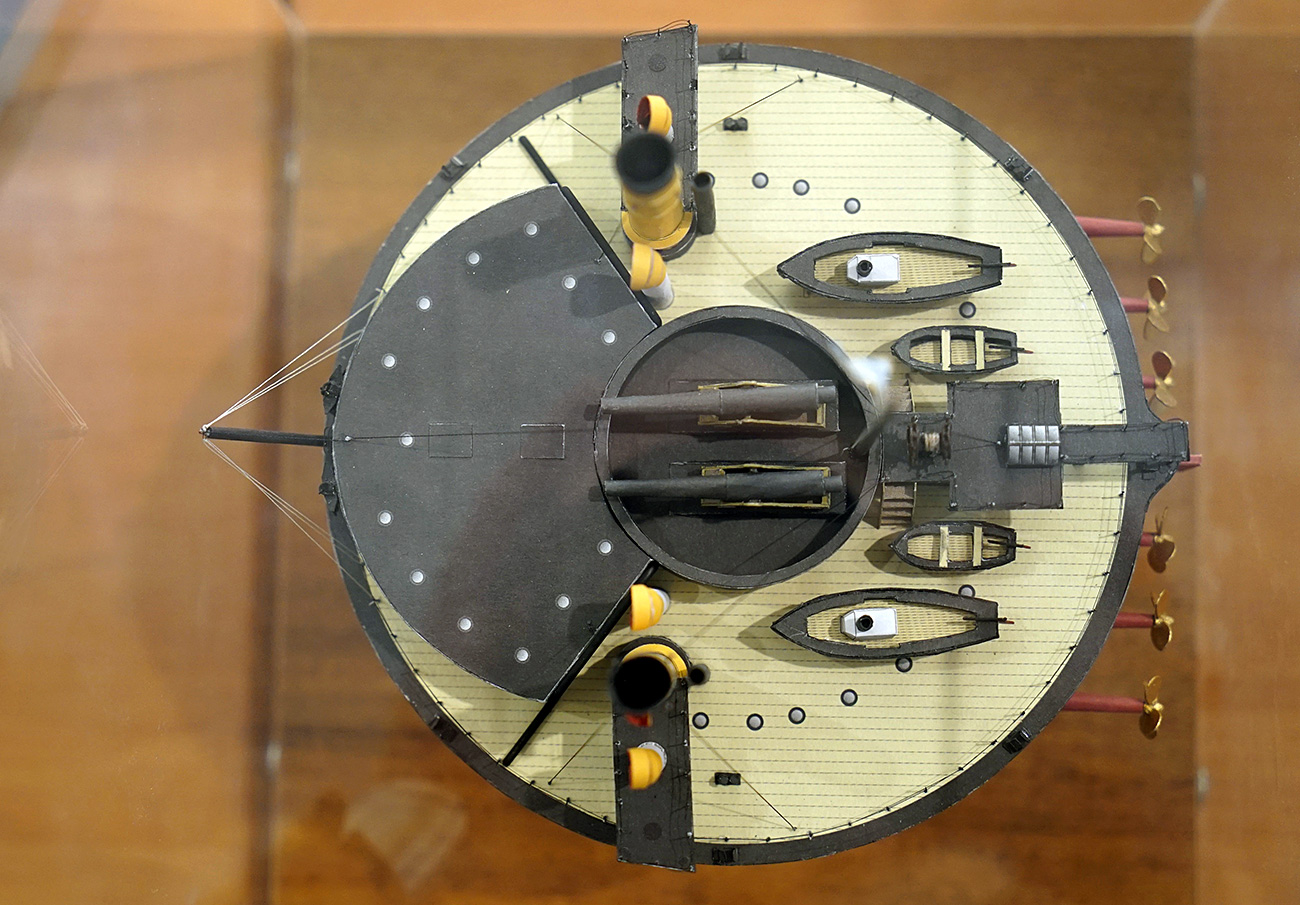 A model of the battleship Novgorod, built by Yekaterina Lokhmanova, displayed at the exhibition hall of the Museum of the World Ocean during the Ship Modelling World Championship in Kaliningrad. Source: Igor Zarembo/RIA Novosti

"Since Russia didn’t have any money and was also forbidden to have a full-fledged fleet on the Black Sea, we had to experiment," added Khodaryonok.

The first ship, called Novgorod, was launched in the presence of the emperor on May 21, 1873. The second, which was named in honor of its creator, was launched on September 25, 1875. Unlike the "Novgorod," the new Popovka received a thicker, double layer of armor, a more powerful engine, and a larger superstructure over the deck. But the project was unsuccessful.

"The Popovkas were unable to navigate in the open sea and were slower than turtles. Moreover, the impact from the gunfire made the ship turn around. They could have played some minor role only as single means of coastal defense, but not even to a full extent," said former Supreme Commander of the Black Fleet Igor Kasatonov.

Consequently, Vice Admiral Popov and Novgorod spent the entire Russian-Turkish War in 1876-1877 docked at the harbor in Odessa, making only three expeditions without ever seeing battle.

All Andrei Popov's attempts to have the ships navigate the sea were met with counteraction from the Admiralty, which did not see any potential in them. Moreover, other shortcomings were discovered in the ships when they were used, such as the complete lack of autonomous navigation and poor conditions for the crew.

After the end of the war the Vice Admiral Popov was modernized, receiving a new ventilation system, new artillery machines, and a new engine. As a result, its stability on the waves significantly increased and its navigational qualities were improved. However, neither the Vice Admiral Popov nor the Novgorod participated in combat.

What happened to the 'Popovkas' afterwards?

Nevertheless, the idea of round battleships did not die. After the destruction in 1878 of the imperial ship Livadia, the imperial court showed interest in the ships. In the new project the Popovkas took note of the defects of the previous vessels. The body was flatter and their speed was increased to 15 knots with a draught of 1.8 meters. The ships were also built in Great Britain, but according to Russian blueprints.

On September 24, 1880 Livadia left the dock. It was equipped with the most sophisticated technology for the times, including the "Yablochkov candles" (the first electric arc lamps) and plumbing. Also, thanks to the new construction, it possessed good navigational qualities.

But when Alexander III ascended the throne in 1881, Andrei Popov fell into disfavor and the Russian Empire, which had increased its shipbuilding potential, began constructing a new full-fledged fleet for the Black Sea. That is why interest in the unique round ships fully disappeared.

Thus the Livadia was transformed into the Opyt steamship, which for a long time was anchored purposelessly in St. Petersburg, then transferred to Sevastopol before being decommissioned in 1926.

The same fate awaited the other Popovkas. Both the Novgorod and the Vice Admiral Popov remained moored to an Odessa pier until 1913 when they were sold to private hands.

"This project was not developed further and in general, the experience with the Popovkas is considered unsuccessful. That is, the ships had problems and no notable qualities. However, in terms of its external form, the ship was rather original, although in battle it was extremely limited," Khodaryonok summed up.