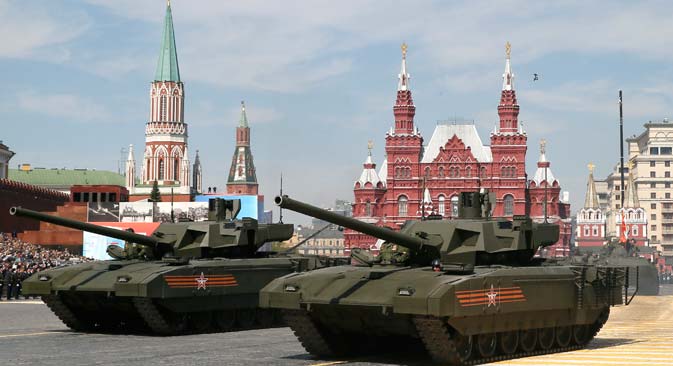 ‘Armata’ will not be available for export for another 15 to 20 years, for a number of reasons. Source: EPA

India, China and some Southeast Asian countries have expressed interest in buying new equipment on the Armata platform. According to Vladimir Kozhin, the President’s aide on Military Technical Cooperation, this interest is despite the fact that the Armata is expensive. But can the Armata be made available to them?

India and China are among countries which have shown interest in acquiring the new T-14 ‘Armata’ tank, Russia’s most advanced tank which was unveiled at the 70th Anniversary commemorative Victory Day celebrations in Moscow last month.

Armata technology may be used for Indian armoured vehicles, and could replace the existing main battle tanks ‘Arjun’ and other armoured carriers, a researcher at a leading Indian think tank said.

“India needs more advanced technologies, considering the dynamic growth of the neighbours' armament”, Dr Rajeswari Pillai Rajagopalan, senior research fellow in the field of defence and security at the ‘Observer Research Foundation’ (ORF) said in an interview to RIR.

However, this does not mean that Russia is ready to sell the new advances in the next two or three years.

Vladimir Kozhin, Aide to Russian President Vladimir Putin, said that the Russian army would be the first to receive the new equipment, but confirmed that interest has been expressed by foreign countries.

“There really is interest, despite the fact that the equipment is expensive,” Kozhin said. “To a large extent, it is our traditional partners; India, China and South-East Asia,” he said.

Demonstrating the Armata may have a negative impact on export and sales of the previous tank series T-90MS, experts have opined.

Serving the dessert before the main course may kill the buyers' appetite. Why buy the previous series, when the new one is coming up?

“We have already had such negative experiences first with T-72S and then with T-90,” Alexey Khlopotov, military expert on armoured vehicles told RIR. “In early 1990s T-72S successfully passed tender tests in a whole number of countries. However, in the end no country bought it after we demonstrated T-90S in 1995-97”.

The demonstration of a brand new armoured vehicle Armata at the parade was a purely political move, because the Armata hasn't been tested in the field yet and it could yet be technically improved.

However, the Kremlin has a full understanding of the possible difficulties with export of the past series of tanks. This means that the demonstration was strictly necessary and should bring dividends.

Another factor that could put brakes on the sale of new tanks and armoured carriers on the Armata platform is the excessively high price.

Russia has other tanks to offer, like the T-90MS.

“It is an excellent demonstrator of technologies that have been embodied and developed in the Armata,” Khlopotov said. “However, no such tank has been sold so far. Why? The price is high. So if one of our potential partners wants to buy an ‘advanced’ tank, he should first try to afford the fully loaded ‘luxury’ version of T-90MS”, Khlopotov said.

‘Armata’ will not be available for export for another 15 to 20 years, for a number of reasons. To begin with, these machines need to be perfected and the domestic army should first be equipped with them.

“The technical aspect of certain parts is not finalized, the development continues, and it will be completed only after long tests. All this will require several years, and this period can not be accelerated because all necessary stages need to be passed,” Oleg Zheltonozhko, an independent military expert said.

Another problem is the lack of production capacity. Once this platform is approved for service, production facilities of Uralvagonzavod would be loaded for a long time with work on the orders of the Russian Armed Forces. ‘Armata’ is not only a tank, but a family of combat vehicles.

The motive for negotiations

However, the option of joint cooperation exists, consisting of creating joint ventures and development that is currently promoted by India.

“Armata as a universal platform is under development and the best option is the format of co-development and co-production with India, as in the case of the fifth generation fighter (FGFA),” - Rahul Bhonsle, Director Security Risks Asia told RIR. According to Bhonsle, the Indian tank Arjun Mark 1 and 2 don't meet the needs of the defence forces, despite being developed domestically. He pinned his hopes on the third series, ‘Arjun Mark 3’.

“In the case of highly developed countries like India and China, I consider the technology transfer possible, and joint development of the export version of Armata, and in this case, the possibility of establishing a joint enterprise on assembly at the customer's territory. For Russia, this would be a very profitable solution from the economic point of view,” Khlopotov said.

These are serious issues for lengthy negotiations. It is also important to bear in mind that historically Russia has been a third party between India and China which have been in a conflict. Therefore, supplying such heavy weapons to one of the parties could trigger a cooling of Russia’s partnership with the second party, a situation that Russia does not want now.