Mistrals to make way for ‘Priboys’ 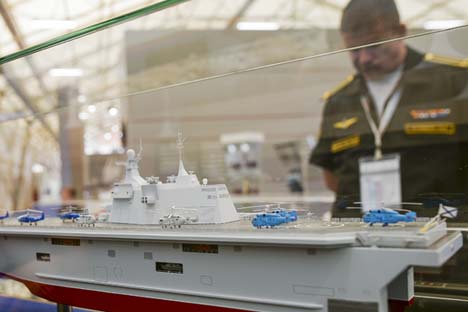 The decision to build the first ship of the project could be taken as early as late 2016. Source: Alexander Vilf/RIA Novosti

The military doctrine of 2014 strengthens causality by which Russia can operate its forces outside of state borders, while acting within recognized international norms and principles. Article 32 of the document speaks of “early deployment of troops (forces) to potentially dangerous strategic sectors,” and about “protecting the national interests of Russia in the Arctic.”

BEK for the Black Sea and Baltic

After the collapse of the Soviet Union, the Navy in 2008 only had ageing Project 1171 ‘Tapir’ landing ships, and the ‘Nosorog’ 1174 and 775, constructions from the Soviet era. The navy looked to the West to acquire a modern amphibious landing ship and formalised a contract to buy four French ‘Mistral’ helicopter carriers. Russia even agreed to construct two ships in wharves in Russia, with all the necessary documentation. However, political tensions in Europe over the past 18 months have forced France to renege on the agreement and hold back delivery of the completed ‘Mistrals’ to Russia.

To further enhance the Russian landing fleet, Project 1171 BDK ‘Ivan Gren’ was also undertaken. The lead ship of the project, put in the water on 18 May 2012, it will be commissioned in 2015. On 11 June 2015, shipbuilders laid the hull of the second ship of this project, the ‘Peter Morgunov’. The Kaliningrad shipbuilding factory Yantar plans to complete construction of the ship in 2017. A total of six BDKs will be built for Project 11711. While using Mistral amphibious assault ships in the Black and Baltic Seas seems excessive, the Project 11711 BDK Ivan Gren is equipped is capable of transporting 13 tanks or 36 infantry fighting vehicles and armoured personnel carriers (APCs), or 300 landing troops for a distance of 3,500 nautical miles, and can handle combat functions in these theatres.

On 11 June 2015, when ‘Peter Morgunov’ was laid, V. Tryapinchikov, head of the RF Naval Forces Shipbuilding Directorate, told journalists that heavy BDKs, vastly superior to ships of the Ivan Gren type, would be constructed over the next 5 years.

On 16 June, as part of the Army-2015 Forum held in Kubinka, a prototype of the ‘Priboy’ amphibious assault ship was displayed at the Russian Navy Chief’s stand.

The Chief Commander of the Russian Navy told journalists: “This is our answer to the Mistral. This ship is still in the form of a mock-up, but the specifications being put into it allow us to calculate that the Project ‘Priboy’ ships will successfully meet the challenges related to loading, transporting, and landing naval troops.”

According to Sergey Vlasov, Director General of the Nevsky Design Bureau, each of the Project Priboy ships is estimated to cost 20 billion rubles ($367 million).

The decision to build the first ship of this project could be taken as early as late 2016.

With a 14,000 ton displacement, the ship can reach speeds of almost 20 knots and deliver up to 60 pieces of equipment over a distance of 6,000 miles. It can sail for 60 days. The UDK ‘Priboy’ will carry 8 Ka-27 and Ka-52K helicopters, in anti-submarine and attack modes, and will also be equipped with four 11770M or two 12061M landing crafts. The Navy is likely to acquire 4 ships of this type.

All the UDK Priboy systems will be built by domestic enterprises, to prevent repetition of the Mistral problem.