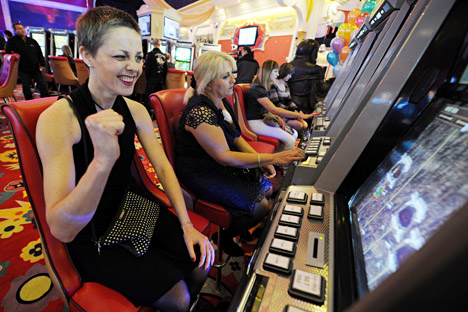 The Primorye casino complex aims to attract up to 10 million visitors a year.

TASS
Investors are pushing forward with a multi-billion dollar gambling center near Vladivostok, hoping to lure up to 10 million visitors per year. $2.2 billion will be invested in the gambling complex, which is expected to attract visitors from northern China.

Russia has signed agreements with investors, including gambling tycoon Lawrence Ho, on constructing a new casino center near the Far Eastern city of Vladivostok.

Investors are pushing forward with the multi-billion dollar gambling center, hoping to lure up to 10 million visitors a year to a Russian version of Macau.

The resort area’s first casino is set to open its doors this September. Investors are planning to plow a total of $2.2 billion into the gambling complex, which has been dubbed “Primorye” after the Russian name for the region.

“Considering the zone’s geographical location, we can assume that about 50 percent of all visitors will come from Asia, especially from China,” said Timur Nigmatullin, analyst at Finam investment company.

Analysts said that Primorye might benefit from being significantly closer to northern China than Macau, which is the largest gambling center in Asia and is situated on China’s southern coast near Hong Kong.

One of Primorye’s key investors is Melco International Ltd, a firm belonging to Lawrence Ho, one of the heirs to Stanley Ho’s gambling empire in Macau.

Apart from the Ho family, other large investors in the project include Diamond Fortune, which is preparing to begin the construction of a casino dubbed Golden Gate as early as the first half of 2016.

Royal Time Group, the project’s third investor, which is already heavily involved in the Azov-City gambling zone, is expecting to start the construction of its 250 thousand square kilometer Zhar-Ptitza (‘firebird’) casino and resort this summer.

The designers behind the project say the name was picked for a reason, since the future resort will mostly target Asian tourists.

The Zhar-Ptitza, or Phoenix as it is also known, is a mythical bird, which arises from the ashes, and is considered highly symbolic in some Asian cultures.

“The project’s entire infrastructure has a uniform Asia-influenced style,” says Alexey Belinsky, head of the European division of Steelman Partners, an architectural company working on the project.

The original plan called for the casino to house 500 slot machines and 30 gambling tables. But the numbers are currently being reviewed and may reach 3000 machines and 150 tables.

Once completed, the 619- hectare space will include 15 hotels, 12 rental villas, a yacht club, a multifunctional trade fair complex and other recreational infrastructure.

The article is abridged. Read the full version at ASIA.RBTH.com.