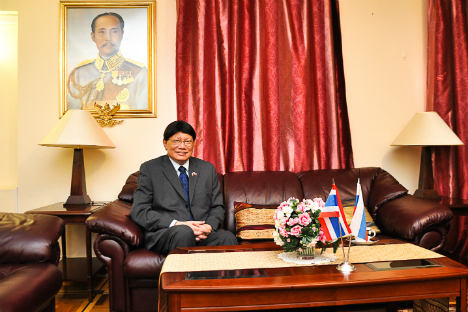 In an exclusive interview with RIR, Thai Ambassador to Russia Itti Ditbanjong talks about the growing economic, political and cultural ties between the countries.

After almost 4 years in Russia, Dr Itti Ditbanjong, Thailand’s Ambassador to Russia is set to return to Bangkok.  In an exclusive interview with RIR, he spoke about the increasingly active role of Thai businesses and investors in Russia, growing educational and cultural ties between the countries and how to increase two-way tourism.

RIR: How would you describe the state of bilateral relations between Russia and Thailand at the moment?

Itti Ditbanjong: I think they are excellent. We have a 118-year long base for our relations. And recently, our two countries have come much closer because our policies coincide. Russia is giving much more attention to the East and we are looking forward to having good relations with the West. So, it coincides.

The visit of Prime Minister Medvedev (in April 2015) after the meeting with Thai Prime Minister Prayut Chan-o-Cha in Naypyidaw last year really boosts our relations and the cooperation between the two countries. During that visit, I was in the entourage of the prime minister. I have the feeling that the prime ministers or our countries understand each other very well and they see eye to eye on how we could promote closer relations in all spheres, but particularly in economic terms.

RIR: Recently Vietnam signed a free trade agreement with the Eurasian Economic Union. Would Thailand be interested in a similar arrangement?

I. D.: The offer was made to us during the visit of Prime Minister Medvedev, and after that when we attended the 6th joint commission that we had with Russia here in Moscow. We agreed to look very closely at this. We see its usefulness. But for us, we need to study further on the question. I think that there is a good possibility that we could have a closer cooperation with this group.

RIR: What are other ways to improve economic relations between Thailand and Russia?

I. D.: We have good tourist, cultural, political and economic relations, but we see room for improvement. During the visit of Prime Minister Medvedev, we agreed to double our trade volume. We signed 10 agreement; 5 inter-governmental agreements ad 5 by the private sector. We can see that there is a boost in investment from Thailand to Russia with over $1 billion investment from Thailand.

We’ve also invested in a sugar-refining plant in the Khabarovsk Territory. The agreement worth around $250 million was signed in Vladivostok recently. It is a joint venture between a private Thai enterprise and the local government. It is a very important step and we can see more Thai investors going to the Russian Far East, because it is a very exciting area for cooperation.

RIR: Do Thai businesses see Russia as a safe and lucrative destination for investment?

I. D.: We have investments in a pork farm, in animal feeds and chicken farms.  We believe that the potential of the Russian domestic market is feasible. I know that Thai enterprises are planning to invest more. Now, Russia is inviting us to invest more in the service sector, such as hotels. We have recently established the Thai Pattra Center, which is totally Thai-owned and it has a spa, restaurant and a shop that sells food, including fresh fruits and vegetables.

RIR: Has there been a significant rise in food exports from Thailand to Russia, in the wake of Russian sanctions on western countries?

I. D.: The increase in Russian imports of Thai food products began earlier than that. It’s not because of the sanctions. We intend to provide food security to Russia, and in return Russia provides energy security for Thailand. This was stated during the meeting between our prime minister and Russian President Vladimir Putin during the 2012 APEC summit in Vladivostok.

Of course, the decision of the Russian Government to diversify the sources of food imports has accelerated trade, particularly the exports of food from Thailand to Russia. But we still import a lot of energy from Russia and have a trade deficit.  We’re hoping to reduce the deficit with more food exports.

RIR: In what ways, can Russia and ASEAN increase cooperation?

I. D.: Within ASEAN, we will become a community this year. Many foreign investors see ASEAN as a huge market with 600 million people. Each country will have its plan of how to use the opportunity of the opening up of ASEAN.

I am sure that Russia will find opportunities in ASEAN.  Russia has invested a lot in Vietnam, which is a part of ASEAN.  They could expand their investments to Thailand. We are talking about trucks or other machines that could be produced in Thailand.

My personal task is to promote Russian investment in Thailand. I am sure that tourists, some of which are businesspeople are look for opportunities. We have the feeling that Russia was more Euro-centric in the past but the trend is different now. Sometimes Russians don’t invest abroad since they don’t know the region, but now with tourism and more contact between our two countries, there are opportunities. The investment is now minimal but we are looking to have more investment from Russia.

RIR: What do you think is the biggest challenge that needs to be overcome to increase Russian investment in Thailand?

I. D.: When people think of Thailand, they see Japan, China and other major investors.

They may not know how to compete. They fear that if they go in and compete with Japanese investors, they may have problem. This is my personal feeling. If they know Thailand better, they will see that there are many opportunities for investment. If you invest now, you can have the reach of 600 million people.

Russian investors are more or less into real estate in places like Phuket and Pattaya. We need that, but we need more than that. We need you have very good technology and you can use the resources of Thailand, for example rubber.  There is a big Russian company that wants to invest in natural rubber in Thailand.

The interview is abridged. Read the full version at ASIA.RBTH.com. 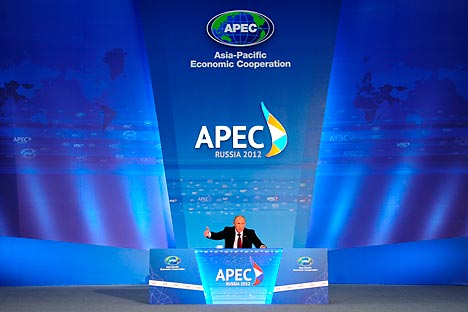