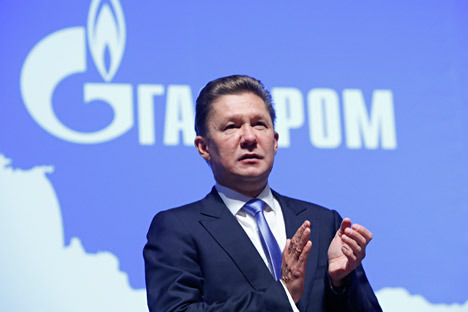 Gazprom CEO Alexei Miller attends a news conference after the annual general meeting of the company's shareholders in Moscow, June 27, 2014.

The income of Alexei Miller, CEO of Russia’s gas giant Gazprom was estimated at $25 million in 2014 by Forbes magazine. What constitutes the massive incomes of senior officials at the gas monopoly and what kind of extra benefits do they receive?

These figures come not only from their salary and the bonus, but from various add-ons, the calculation system for which is explained in Gazprom's collective contract with its management for 2013-2015. The payments are calculated according to the company's minimum wage rate: In 2015 this is 8,370 rubles ($132).

For example, Gazprom's management receives a supplement for access to information that is a state secret (this amount is not mentioned in the agreement). Another premium is given for professional accomplishments.

Rem Vyakhirev, who headed Gazprom between 1992 and 2001, used to get the special services award. The traditional premium or bonus, of a month’s salary, is given to all employees in August, on the Day of the Oil and Gas Industry.

Administrative officials also receive a monthly salary on Gazprom's anniversaries. Additionally, men get 168,000 rubles (20 times the minimum wage) on Feb. 23, the Defender of the Fatherland Day. Women receive this amount on March 8. One month’s salary is also given on each employee’s birthday after the age of 50, but only if he or she has worked in Gazprom for over 15 years.

A Gazprom employee could, until quite recently, vacation in any part of the world and be reimbursed for up to 92,000 rubles. This year a change has been introduced in the contract; Gazprom now reimburses the employee for the entire amount, but only if he or she spends the vacation in the Gazprom pension and health resorts in Russia, Armenia or Belarus.

A view of the Gazprom mountain resort, near Sochi. Source: TASS/ Valery Matytsin

Company managers are entitled to free medical treatment in Gazprom clinics, including dental care and prosthetics, as well as eye surgery.

Besides paying for medical treatment, Gazprom also compensates expenses for costly medicine, on the condition that the employee buys it for at least 75,000 rubles (nine times the minimum wage).

Gazprom CEO's annual bonus depends 100 percent on the corporate key performance indicator (KPI): the company's financial and economic results and the implementation of the investment program. The bonus is paid out as one annual base salary.

For Miller's bonus the determining factor is Gazprom's financial-economic results, for which he receives 70 percent of the bonus. The remaining 30 percent is determined by sector indicators: the volume of gas sold (15 percent) and the introduction of priority production objects (15 percent).

Miller's deputy, management committee members and company directors have an annual bonus formula that is more complex. The general performance indicators of Gazprom managers are supplemented with sectoral and individual ones. All directors of the central organ and the company's branches are divided into several groups and each has its own evaluation criteria.

The deputy chairmen of the management committee, including the CFO and all the management members who have the rank of Gazprom Department Director, are entitled to 75 percent of their annual salaries as a bonus.

Salaries and bonuses for CEOs of foreign oil companies:

PetroChina CEO Wang Dongjin's 2014 salary was 1,081,000 yuan (in the company's annual statement salaries and bonuses are presented as one figure).