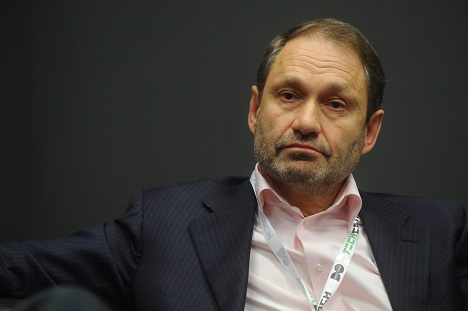 Sergei Fadeichev/TASS
Russian businessman Leonid Boguslavsky entered the Forbes global rating for the first time at the end of 2015, with a fortune of $1.2 billion, much of which is held in Indian investments. How did this pioneer of the Russian venture capital market pave the path to India?

Leonid Boguslavsky first entered the Forbes list of billionaires in late 2015, with a personal net worth of 1.2 billion dollars. Among one of the earliest Russian venture capital investors, he has invested in a variety of Indian start-up ventures, and credits these for his financial gains. Funds for many of these investments in Indian start-ups came from the successful sale of his businesses; in 1996, he sold his company, LVS System Integrator, to the PwC Consulting Firm.

Boguslavsky, along with a pool of investors, created ru-Net Holdings in 200 and invested in the startup Yandex, which soon became one of the largest Russian IT companies and owner of the Internet search engine of the same name and an online portal. At the time, most foreign funds were reluctant to invest any money in Yandex,” said. Boguslavsky. A few months later, after leaving PwC, he invested in the online store Ozon. Then there were the successful investments in the coupon service Biglion, online cinema ivi.ru, and the mapping service 2GIS.

The businessman sold part of his shares in Yandex in 2011, earning around $70 million from the IPO of the then-largest Internet company in Russia. In early 2014, he sold the rest of his shares. Forbes estimates that the transaction could have brought him around $330 million.

Boguslavsky’s business interests have expanded beyond the borders of Russia. “Often my office is a seat on the plane,” he said. He launched the new RTP Fund in 2011 (now it has around 20 projects) in the United States and, in parallel, began investing in Europe through the ru-Net Company.

Boguslavsky understood that his competitive advantage over large Western funds was the result of his experience in working in Russia, and also applicable to other emerging markets.

The most obvious candidate was China. However, Boguslavsky explains, much more money was required there than his fund could afford. “China had very quickly become a fashionable topic. Any local entrepreneurs, who had done something notable, immediately aroused the interest of investors from the United States. India also has billion-dollar companies, but few people can name them all,” he says.

The potential offered by India, through which Boguslavsky at one time traveled by jeep is, in his opinion, no less than is available in China.

“He is perhaps the only one who, at the time of our arrival in India, invested in a local venture, and did so successfully,” says Andrey Terebenin, head of the newly created Sistema Asia Fund, an Indian venture fund of AFK Sistema.

Boguslavsky thought that he could work in India just as he had worked in Russia. This proved to be only 50% true, the billionaire readily admits.

When beginning his work in India, the Russian businessman focused on projects in the e-commerce sphere; an industry he understood after his experience with Russian investments. “E-commerce has simply been created for India. It essentially replaces the niche of modern shopping centres and malls, which are present only in major cities. Moreover, the smartphone market is quickly growing, as access to the Internet is expanding,” said Boguslavsky.

His first two investments in India (around $17 million) were not very successful. In mid-2012, ru-Net had invested in two projects of the Smile Group; online shopping site Freecultr (clothing) and BeStylish (shoes). However, these never took off.

The main reason for this, Boguslavsky said, was that Harish Bal, founder of the Smile Group, worked as a business incubator. He only generated ideas. To implement them, he hired a CEO from the outside. “This was our school of hard knocks. The company must have the founder working in it, ready to do anything that is required to make his brainchild succeed,” said Boguslavsky.

“It’s like billiards. If you want to learn to play really well, then play for money against strong players. And you must be willing lose a certain amount of money to learn,” he said. Since then, he has made it a rule to enter a start-up only if a fund comes in with him, one he can trust and which has an office in India.

The third investment of ru-Net in India was made in an Indian division of the Sequoia Fund. The first investment, in the FreeCharge Company (online payment of mobile phone bills), proved very successful.

Indians almost never used bankcards before that. After receiving their salary, the first thing people did was withdraw the cash from an ATM. They filled up their cell phones for $1-2 in the offline mode – at mobile phone vendors, as things were done in Russia a decade earlier.

Kunal Shah, founder of FreeCharge, figured out how to teach Indians to pay for their cell phones via the Internet. For each payment through its service, the subscriber was given a discount coupon from one of the merchant partners, such as McDonald’s, while the commission for the service was paid by the telephone operator. Then FreeCharge launched its own online wallets. Based on this service, Shah also created a payment system, and started accepting payments beyond mobile communications. Now, Boguslavsky said, 400,000 to 500,000 transactions are done through FreeCharge daily.

“FreeCharge is an example of a company that has changed its approach when it comes to business models,” said Boguslavsky. This is another feature of Indian entrepreneurs – they can easily transform and adapt their business, if the existing business model has problems. “In Russia, they will struggle to the last, until they start banging their heads against the wall. Will seek new investors, mortgage their apartment,” he said.

FreeCharge in 2015 was bought by the online trading platform Snapdeal, another company from the ru-Net portfolio in India since 2012. Boguslavsky said during the transaction, the payment had been estimated at $500 million, but he did not disclose the size of his own stake in it. “Snapdeal purchased FreeCharge for cash. We got the money from recovering all of our investments, and placed it into the shares of Snapdeal,” said the businessman.

Boguslavsky had long been interested in companies that worked on the ‘coupon model’ similar to Groupon. In the USA, he discussed projects with LivingSocial. In Russia he invested in Biglion. Such a model was then being promoted in India by Snapdeal, which then abandoned the ‘coupon model’ and became a commercial online platform that combines a variety of sellers of goods – from saris to gadgets. Despite the fact that India already had a large online store, Flipkart, and the online giant Amazon, Snapdeal created quite a successful business.

Flipkart works on the traditional model of an online store with large warehouses, large number of personnel and warehouse stocks. At Snapdeal, this was done to the contrary, with only a small part of the goods going through its own centres, while the rest of the goods went directly to the buyer from the seller’s warehouse. Flipkart was focusing on big cities, while Snapdeal was oriented towards the mid-size cities.

Boguslavsky says Snapdeal was his most successful investment in India, having grown almost 40 times. ru-Net was one of the company’s early investors. Its share has since been watered down, but is worth more now. Among the shareholders was Chinese giant Alibaba, the Taiwanese Foxconn, the Japanese Softbank, and the American eBay.

Over four years, ru-Net had invested in about a dozen companies, after having studied several hundred startups. “In spirit, the Indians are phenomenal entrepreneurs and salespeople. In Russia, even strong founders are often unable to sell themselves and their companies. Here, they can sell even the air,” said Boguslavsky.

ru-Net representatives come twice a month to India, meeting with all portfolio companies. One cannot limit one’s self to just conference colas: “You need to drink tea, go for lunch with the partner, and ask about his kids. From the body language, and facial expressions, you may get a feeling that you still have more things to learn,” Boguslavsky said. Understanding the mentality helps avoid making mistakes. For example, Indian entrepreneurs do not like to share any bad news – they do not wish to offend or upset people. And even monthly financial statements do not guarantee that the investor will fully understand the company’s current situation.

The second wave of ru-Net investments came in 2015, when a new adjustment was made; many investors feared that the declining Chinese market would also affect India.

“But everything has now calmed down. India has convinced itself, and others, that it is an island of stability,” said Terebenin. He believes that the valuation of Indian companies is being boosted by local e-commerce leaders, which are the ones that define the “inordinate upper threshold”.

“Investing in Indian projects certainly has its risks, but this is more than made up for by the possibility of exponential growth; the entry into a project at a low valuation, unparalleled with their global analogues, and rapid exit with multiple multipliers,” said Andrey Romanenko, shareholder of the Run Capital Fund.

The more Boguslavsky learned about India, the more the strategy of his fund changed, adapting to models that took advantage of the uniqueness of India.

For example, Snapdeal did not focus on the major cities, but on those where competition was lower, and consumers were not spoiled. Another of the Fund’s portfolio companies, AppsDaily, built an offline distribution network for mobile applications in regional cities; the majority of local buyers of smart phones need to have explanations given about how the applications work, to teach them to use the applications.

The Faasos project fills the niche between cheap street food and expensive restaurants. The city is divided into sectors, in each a small kitchen is opened, and the nearest available courier delivers the food to customers.

“In fact, this is the ‘Uber model’ used in different spheres of life. They use technology to create an infrastructure around a local point,” said Boguslavsky. Practically the same technology was also used by PepperTap – a delivery service of fruits and vegetables from the nearest stores.

“We are now reviewing up to 10 cases per week. And a good one half of these are a copy-paste of American models. And here our experience in Russia from the 1990s comes in very handy,” said Terebenin.

Boguslavsky however notes that if in Russia you can copy models at 100%, in India, even the time-tested models need serious adjustments and rebuilds.

He feels confident that, despite all of the unique challenges, the Indian market is huge, “and the stick, really can be turned into a golden apple tree – with the right approach.”

Nevertheless, many expectations did not materialize. For example, there was the illusion of cheap labour. In the office of any average company, there are boys who sweep the dust and bring coffee. However, as it turned out, labour is cheap in cases of workers whose efficiency is low.

“The wages of specialists, in the best case scenario, are the same as in Russia,” said Boguslavsky.

The article is abridged. Read the full version published in Russian by Forbes.ru.