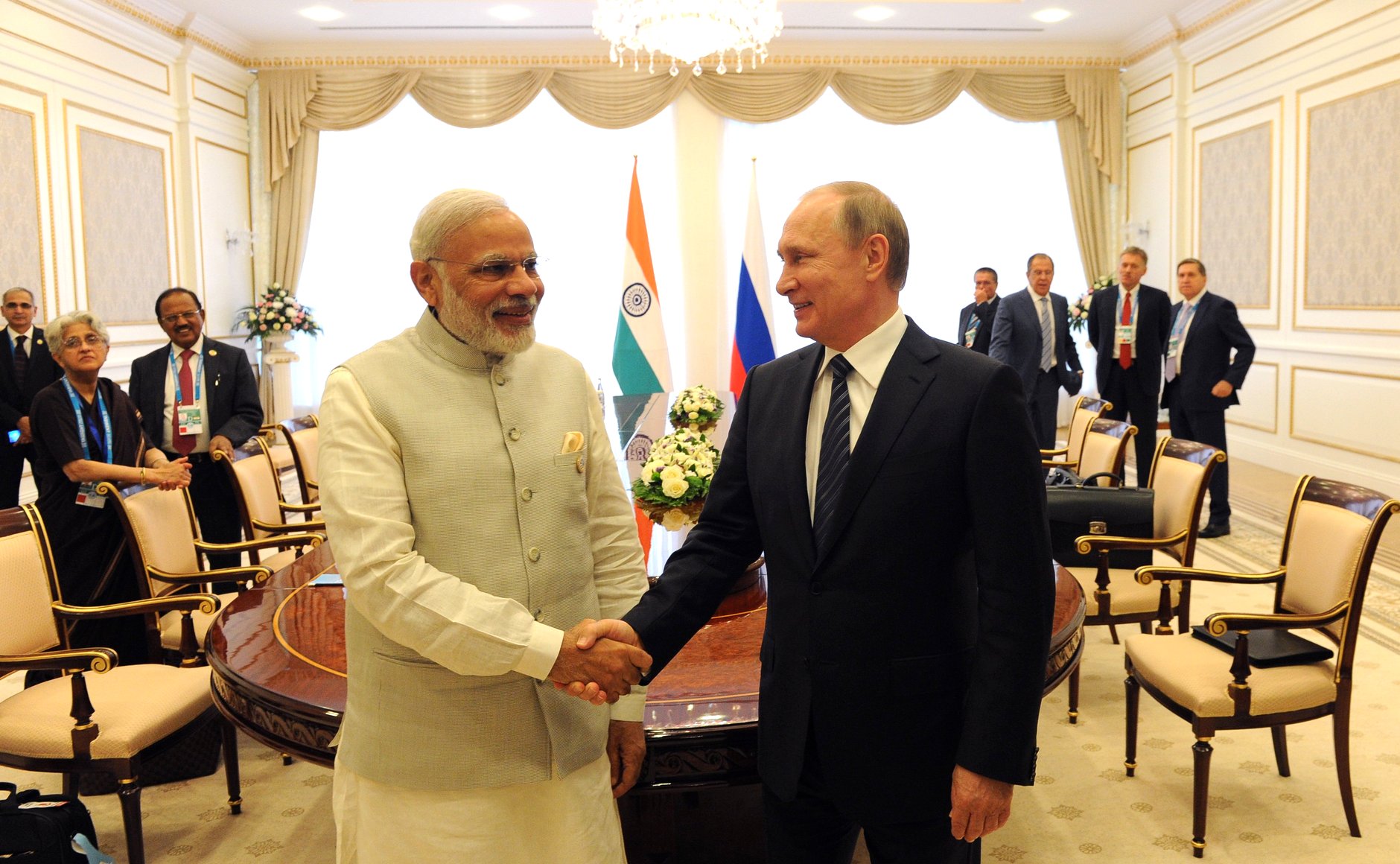 kremlin.ru
India was formally admitted to the Shanghai Cooperation Organisation (SCO) in Tashkent on Friday, after signing the base agreement called the Memorandum of Obligations. Indian Prime Minister Narendra Modi’s last engagement before he wound up his 30-hour visit to Tashkent was a meeting with Russian President Vladimir Putin.

At the 45-minute long meeting with Vladimir Putin on Friday afternoon, his last official engagement before he left Tashkent, India’s Prime Minister Narendra Modi expressed gratitude and thanks to the Russian President for his support in getting India into the Shanghai Cooperation Organisation (SCO).

India, along with Pakistan, was formally accepted as a new member at the Ufa summit of the SCO in July last year, when Russia was chairing the SCO. Having signed the Memorandum of Obligations, a mandatory requirement by which New Delhi accepted all the obligations by which the other member countries of the SCO abide, India is now a member. During the course of the year, before the next Summit in Astana, Kazakhstan, India (and Pakistan) will further sign around 30 more instruments of accession in various sectors of cooperation and attend the 2017 summit as full members.

"India is glad to be a member of the SCO & looks forward to fruitful outcomes particularly in the field of economic cooperation through SCO," Modi said on his official Twitter account. “Cooperation with Central Asia is of great importance for India”, he added.

In his address to the SCO leaders, the Indian Prime Minister said, “India is not new to the region. Our historic linkages with you are centuries old. And, it is not just geography that connects us. Our societies have been enriched by links of culture, cuisine and commerce.

They form the bed rock of our modern day relationships with Russia, China and the countries of Central Asia”, Modi said.

During their meeting, President Putin told the Indian Prime Minister that India is a special and privileged partner and that there is long standing friendship between Russia and India. He welcomed India signing the Memorandum of Obligations of SCO.

India’s entry to the SCO in 2017 would lead to even “closer Russian-Indian cooperation”, President Putin said. "This will provide us with an opportunity for closer work with our Indian friends, now at the floor of the Shanghai Cooperation Organization," the Russian President said.

He said he was looking forward to India's Chairmanship of BRICS, which has grown in influence. Prime Minister Modi said India, as the chair of BRICS this year, would keep up the momentum generated during the Russian presidency of BRICS last year and aim for closer cooperative ties.

"We put high hopes on your leadership in this organization," President Putin said. India’s presidency would also promote "consolidation of this recognized international organization, whose influence is continuously growing," the Russian President added, according to TASS.

The two leaders discussed cooperation in civil nuclear energy, partnership in the gas and petrochemicals sector. They also discussed how to take their cooperation in the space sector ahead, an Indian government spokesman said.

Among the crucial issues they discussed was how to raise the levels of bilateral trade. Matters relating to trade and investment were raised and officials were urged to come up with innovative suggestions to raise economic cooperation. The Indian PM mentioned the first BRICS Trade Fair, to be held in October in New Delhi, in this context, as a means to showcase improved economic ties.

Regional issues were discussed, particularly the situation in Syria and Afghanistan, sources told RIR. Both leaders expressed the view that the violence had to be curbed and the spread of the terrorist influence in the region halted. ‘Brexit’ and its fallout on the global economic scene did not come up in the conversation.

Both leaders also spoke of “age old cultural linkages” and agreed to find ways of further invigorating cultural and people to people ties.

Modi also thanked Putin for Russia’s strong support for India’s application to enter the Nuclear Suppliers Group (NSG). India did not gain entry at the NSG plenary session in Seoul, which ended Friday, but will keep pushing for admittance.

The presidency of the SCO passed in 2016 from Russia to Uzbekistan. Regional security and the issues of economic cooperation are among the priorities of SCO, a political, economic and military alliance, founded in 2001, that includes Russia, China, Kazakhstan, Kyrgyzstan, Tajikistan and Uzbekistan.

India and Pakistan, which enjoyed Observer status in the organisation since 2005, will come on board as full members from the next summit in 2017.

“The SCO is a group which brings together countries of our extended neighbourhood. We have been working with other SCO members in several fields. We have been talking to them in working groups relating to trade, transport, culture and terrorism and so on and we hope that our engagement in these areas will intensify through this. The SCO is a major group in terms of countries that have a huge potential in terms of energy. In fact, there is a talk of an SCO energy club emerging so we will wait and see how that develops,” said Sujata Mehta, Secretary in the Ministry of External Affairs.

Asked about areas of cooperation within the SCO, Mehta said, “Cooperation in the area of security is part of the subject matter of the SCO…All countries which are members SCO cooperate with each other. In fact there is a regional anti-terror mechanism that is formally established within the SCO, and we too will be part of that,” she said.

Earlier, in an interview with the Chinese news agency Xinhua, President Putin said the admission of India and Pakistan to the Shanghai Cooperation Organization (SCO) will make the SCO a more powerful, influential and popular association in the region and worldwide.

"Indeed, as the Shanghai Cooperation Organization expands its areas of operation and its membership through the participation of the powerful countries I have just mentioned [India and Pakistan], it turns into a very powerful international association that commands respect and is relevant both in the region and worldwide," Putin said in an interview with Xinhua news agency, prior to his visit to China. He travelled to China from Uzbekistan, after the SCO summit.

"At the summit held last year in Ufa, Russia, we decided to admit to the SCO another two states, India and Pakistan. We are to formalize this decision at the Tashkent meeting [on June 24]. We will also consider the intentions of other countries to join our work," he said.

"The international environment is complicated and multifaceted, and issues are not resolved by the mere fact that countries with different approaches to and views on various international challenges join our Organization. However, as we expect, their accession does create conditions for the issues to be resolved," Putin told Xinhua.