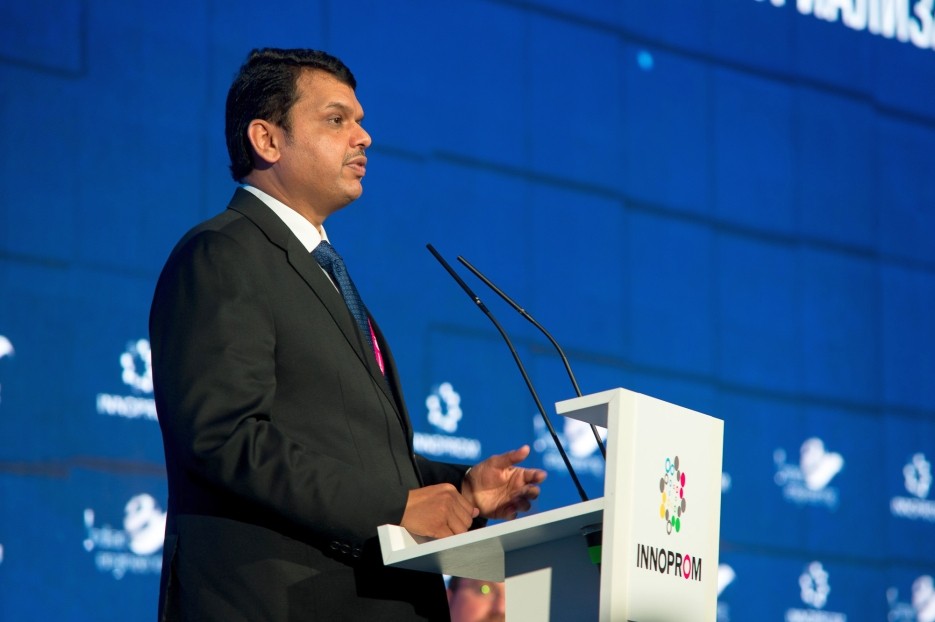 Innoprom.com
The chief ministers of three large Indian states are part of the large Indian delegation at INNOPROM 2016, Russia’s largest industrial trade fair. Devendra Fadnavis, Chief Minister of Maharashtra state, spoke in an exclusive interview to RIR about the purpose of his visit to Russia.

Mr. Fadnavis, is this the first time you are in Russia and in the Urals?

Yes, I am here for the first time. Innoprom is a perfect example of the renewed relationship between Russia and India. Our countries have been collaborating at the federal level, but in Russia they realize that India has states. The main purpose of my visit is to get acquainted with the Sverdlovsk region and talk about the state. We also agreed to establish a team that would identify areas for further work within the framework of the memorandum signed on 11 July. In particular, we will cooperate in the mining and infrastructure projects.

This is the first protocol of intentions that we have signed with a Russian region. In fact, this is just the beginning. We have laid the platform and we will do everything as partners for the implementation of regional capacities. We plan to sign another memorandum with the St. Petersburg representatives, namely the "Vodokanal". It will deal with water purification in Mumbai.

Are there only officials in your state’s delegation? Who selected the Companies to participate in the exhibition from Maharashtra?

Yes, they are mostly officials. But a large delegation of business representatives will also be present at the forum. We proposed candidates, but the final choice was up to the Indian Government.

Whom did you recommend for the visit, in that case?

Maharashtra state mainly specializes in engineering, and the majority of the stands that are here represent that industry.

At the plenary session, you said that your state has certain preferences for foreign investors. Could I clarify what they are exactly?

We provide investors with infrastructure, communications, bundled services, help establish a business in our country. We also offer tax breaks for some specific projects.

What kinds of business are exempt from paying taxes?

Value Added Tax will not be charged as long as all of the investor's investments pay off.

Are there special economic zones in your State? Which sectors do they target?

We have special economic zones and business parks, where we promote projects with investments from abroad. In particular, projects in the defence industry. A quarter of all manufacturing industries in India are represented in our state.

How many Russian companies are operating in the state, and what number you would like to see in the future?

At the moment there are not so many. We want more, as there are business opportunities in our state. Many investors are particularly interested in pharmaceuticals.

Where else do you see opportunities for synergy of Russian and Indian businesses?

Firstly, our state has a long coastline, where one of the largest ports is located. Secondly, there is a development in the Pune auto industry. It is like the Detroit of Western India, where all the major automakers are represented. Thirdly, there is the Delhi Mumbai Industrial Corridor. Fourthly, for "smart cities" that have been designated in our state, we are now developing infrastructure for them. They are based on the Internet. Fifth, development of the rail network and the metro system. Finally, extraction of mineral resources.

We are waiting for investors from Russia.

How often do you go to such exhibitions to promote the state?

About three or four times a year. Through these activities, we have been able to attract a lot of investment.

Maharashtra, the state in which Mumbai (and the ‘Bollywood’ film industry) is located, is the locomotive of the Indian economy. It accounts for 15 percent of India’s GDP and 25 percent of exports, 30 per cent of foreign direct investment, and 25 per cent of engineering manufacturing.