Russia and Reliance Aerospace to make 200 helicopters in India 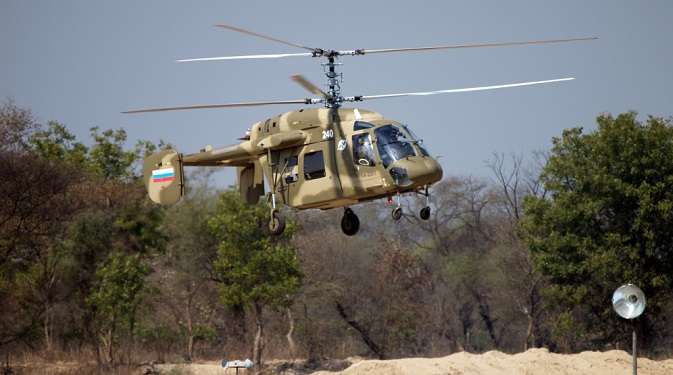 The Russian government has selected Reliance Defence and Aerospace (RDA), a company owned by Indian billionaire industrialist Anil Ambani, for a joint venture to manufacture almost 200 Kamov 226T helicopters in India. The contract, worth around US$ 1 billion, is the second deal won by the Ambani venture, after the Pipavav Defence shipyards, part of the Reliance Group, was selected earlier this month by Zvyozdochka Shipyard of Russia for the refit of 24 EKM 877 submarines in India.

The Russian government is providing a major boost to the Indian government’s ‘Make in India’ programme by choosing Reliance Defence & Aerospace (RDA) for a joint venture enterprise to build 197 units of the Kamov 226T helicopters in India.  According to media reports in the ‘Times of India’ and ‘Business Today’ on Friday (August 28) quoting informed sources, RDA has been chosen for the project to manufacture 197 helicopters for the Indian Army and the Indian Air Force.

According to the Times of India, under the agreement signed between Reliance Helicopters, Russian Helicopters and RosoboronExport, the official agency for defence exports of the Russian defence ministry, Reliance Helicopters will be the lead integrator for a licensed production arrangement with transfer of technology from Russia. According to the newspaper’s sources, the Reliance Group will have a majority 51% stake in the joint venture, while the remaining 49% will be held by the Russian government.

The media reports said the project is to be executed under a new joint venture, for which the chosen Indian partner is a newly set-up helicopter wing of Reliance Defence, which, in turn, is a subsidiary of Reliance Infrastructure. The process to acquire the industrial licence and the land to house the manufacturing unit is underway. The Maharashtra state government has reportedly identified land for the project which will house the Reliance Group's proposed plant to manufacture the helicopters at Nagpur.

The order to manufacture the almost 200 helicopters is valued at close to $1 billion. This is among the largest deals under the "Make in India" programme, and will see the manufacture of 197 Kamov 226T choppers to replace the ‘Chetak’ and ‘Cheetah’ fleets owned by the Indian Armed Forces.  Those helicopters have been operating for close to 30 years in frontline operations for the Indian armed forces, particularly in difficult, high-altitude terrains like the Siachen glacier, the sources noted.

The RDA is the defence segment of the Indian billionaire Anil Ambani-led Reliance Group, which was formed after the Indian government allowed private Indian companies to acquire rights to manufacture defence hardware last year.

During his visit to India in December 2014, Russian President Vladimir Putin had pushed for the Ka-226T at his summit meeting with Indian Prime Minister Narendra Modi. Having agreed to make these helicopters in India, Russia was offered an initial deal for manufacture of almost 200 of these helicopters, with the potential to increase the number by another 400."We are committed to actively participating in Prime Minister Modi's ‘Make in India’ and 'Skill India' programmes," the spokesperson for Reliance Defence said when asked for the company's comment on the deal, which involves manufacture of these light utility helicopters in the country. "The manufacture of both military and civil helicopters, to meet the needs of the country is a significant part of this commitment," the spokesperson said.

After extensive talks, the Russian government communicated to India that it will be implementing the project in a joint venture with an Indian company. The deal also involves transfer of technology and the partner Moscow chose for the project is Reliance Helicopters.

The Pipavav Defence Shipyards, also a part of the Anil Ambani – led Reliance Group, was selected by Zvyozdochka Shipyard of Russia to modernise 24 EKM 877 submarines in India. The RDA acquired the controlling stake in Pipavav shipyards earlier this year. The company was also selected by United Shipbuilding Company of Russia for the manufacture of four Talwar-class frigates, according to sources quoted in ‘Business Today.’