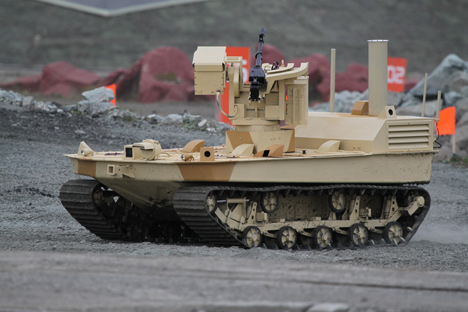 Vitaly V. Kuzmin
Robots being developed for Russia's Strategic Missile Forces will be entrusted with guarding the missile systems. Robots will even be designed to launch ballistic missiles in future, but for the moment scientific research is on to establish requirements for these potential robotic "guards" of Russia's nuclear arsenal.

Robots being developed in Russia will soon be able to guard systems with ballistic missiles like the ‘Topol’-M and the ‘Yars’, key parts of Russia's Strategic Missile Forces (RVSN).

RVSN Commander Sergei Karakayev told journalists on December 17 that the robotic systems will be able to provide solutions for a variety of challenges; from all types of reconnaissance work in deploying missile divisions to helping the personnel.

Karakayev does not rule out that ‘Yars’ and ‘Topol’ "guards" will be developed as part of the work already carried out in setting up potential missile systems. In essence, this is turnkey work, in which a personal "guard" will be appointed to the new system being built; one capable of launching ballistic missiles.

‘Wolves’ will guard the missiles

Development and testing is continuing on the ‘Wolf’-2 mobile robotic system for service in the RVSN. Mounted on a crawler, this robot is a real universal soldier, powerful and heavy, capable of carrying out practically any combat mission; from patrolling the programmed territory and conducting reconnaissance assignments, to guarding important objects and supporting the tactical group with fire.

The Wolf's "teeth" are the Kalashnikov heavy machine-gun and the ‘Utes’ and ‘Kord’ large-calibre machine-guns. The robot's main advantage is its ability to keep firing as it is moving (at a speed of over 20 mph), with limited visibility, including at night. A thermal imager, a laser rangefinder and a gyro-stabilizer help the ‘Wolf’ fire with precision.

Karakayev did not exclude the use of combat robots that already serve in other forces. The Russian army’s land forces actively use the Platform-M robot, which is smaller than the Wolf-2, but can carry out the same functions. The system is armed with grenades and the ‘Malysh’ machine-gun, and can engage in contactless combat.

Karakayev said the new fourth- and fifth-generation control systems, besides guarding ballistic missiles and helping RVSN servicemen may, in the near future, be charged with "delivering orders from the command directly to the launchers, thus bypassing intermediate links, including in conditions of nuclear activity and electronic warfare."

This means that in the event of a direct threat (for example, when the early missile warning system registers an enemy missile launch or when the catastrophe has already occurred), the robots will decide to make the retaliatory attack by themselves.

Russian robotics (both military and dual-purpose) cannot now entrust robots with such an important mission, and most existing systems are remotely controlled. Therefore, according to Karakayev, "before new robotic systems are accepted into the armed forces, it will be necessary to carry out further research and tests."

Such tests are already happening within the framework of a special programme designed to develop military robotics, to supply the armed forces with new combat robots by 2025.

In collaboration with the Defence Ministry, the Russian Military Industrial Committee (MIC) developed a range of tactical exercises in September 2015 to test the robotic systems for the armed forces.

Representatives of the Russian United Instrument Manufacturing Corporation announced the completion in October of an automated control system for groups of robotic resources named ‘Unicum’. This system, according to the developers, does not require a human presence in the control process while giving the robot near human capabilities.