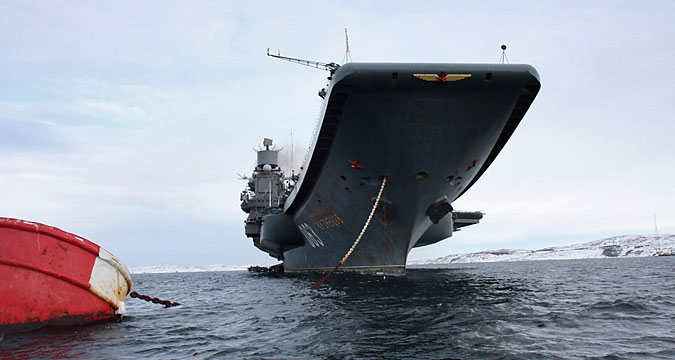 Russia's Northern Fleet aircraft-carrying heavy cruiser Admiral Kuznetsov docked at Severomorsk after a mission in the Atlantic and Mediterranean. Photo courtesy of Information and Public Relations Service of the Russian Navy.

RIA Novosti
The Russian Navy’s aircraft carrier, the Admiral Kuznetsov, celebrates a quarter of a century in service on 20 January 2016. Here are nine interesting facts about the ship.

The Admiral Kuznetsov is the biggest ship ever built in the Soviet Union or Russia. It has a displacement of almost 62,000 tonnes.

A ship with many names

The Admiral Kuznetsov holds the record for the largest number of changes of name of any ship in the Russian Navy. Initially launched as the Riga, it was renamed as the Leonid Brezhnev, and then as the Tbilisi, before finally being named after the legendary Soviet admiral Nikolay Kuznetsov.

How to steal an aircraft carrier

After the USSR collapse, the Admiral Kuznetsov could have been inherited by Ukraine, which claimed ownership of it. In 1991, the ship, then assigned to the Northern Fleet, underwent trials with the Black Caps Fleet in Feodosia, leaving it in Ukrainian territory. However, the first deputy commander of the Northern Fleet, having flown to Ukraine urgently, stepped in. The vice admiral gave the order to weigh anchor immediately and head for Severodvinsk. With its navigation lights off, the ship left there and spent more than three weeks sailing to its permanent base, without any aircraft, and without two thirds of its crew, who were off-duty at the time. Having saved the aircraft carrier, the vice admiral rightly judged that the sailors would 'catch us on by train', and that aircraft, remaining at the onshore airbase, would 'catch us up themselves'.

Had the Admiral Kuznetsov stayed in Ukraine, it would have suffered the unenviable fate of its ‘sister’ships from Project 1143. The Kiev now entertains tourists in China as a museum and hotel, while the Ulyanovsk has been broken up. The Novorossiysk and Minsk were sold to South Korea for scrap, but the latter ended up in China and also became a museum. Ukraine also sold the Varyag to China, which had apparently intended to turn it into a floating casino. China’s government, however, rebuilt it as the Liaoning: China's first aircraft carrier.

The aircraft carrier could have had a catapult launch. For economic reasons, the military authorities opted for a flight deck with a ski jump for conventional take-off and landing naval aircraft.

Onshore training for the air wing

During the Soviet era, a special onshore simulator, or training centre emulating an aircraft carrier's ski jump deck, was built in Crimea to train military pilots of carrier-based aircraft. This centre belonged to Ukraine after the Soviet Union broke up but, since 2014, it has returned to Russia.

Standing up for itself

The Admiral Kuznetsov is well armed. It does need escort ships too, but not many. It can defend itself if necessary; it has 12 Granit anti-ship missiles, 6 AK-630 automatic weapon systems, two Udav rocket launchers with 60 depth charges, Kinzhal surface-to-air missile system, and Kortik gun-missile system to prevent the enemy from even getting close to it, whether from the air or from under water.

Russia's military command said in 2015 that it would be at least five years before any decision was made on whether to build a second aircraft carrier. The country's armaments programme till 2020 does not envisage the construction of an aircraft carrier, so the Admiral Kuznetsov will remain Russia's only such vessel, defending Russia's interests around the globe, for the foreseeable future.