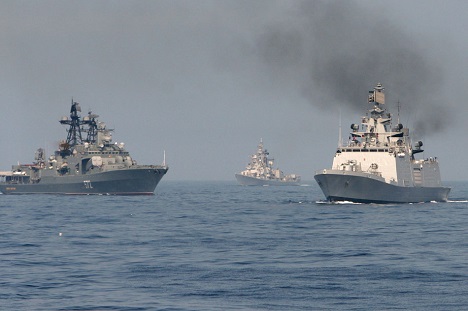 The sea phase will happen between December 19 and 21 in the waters of the Bay of Bengal.

The Russian-Indian naval exercises ‘Indra’ Navy-2016 will serve to strengthen friendship between the two countries and their cooperation in the field of maritime security, said the Indian Ministry of Defence.

“The Indra Navy-2016 exercises will help to further increase mutual trust and improve communications, as well as provide an opportunity to exchange best practices in the naval forces of the two countries. In addition, these exercises will be another milestone in the strengthening of cooperation between the Navies of the two countries in the field of maritime safety, and help strengthen the time-tested ties of friendship,” said the ministry press release.

The sea phase will happen between December 19 and 21 in the waters of the Bay of Bengal. The participants will conduct training exercises in communications, practice various scenarios for repelling air attacks, nighttime ship manoeuvering and artillery firing at air and sea targets, conduct inspections, resupply operations on the move, and much more. In addition, a number of training tasks will be performed by ship-borne helicopters.

The international naval exercises will be led by the Indian Navy.