Is a fresh drop in oil prices to hit Russia’s economy? 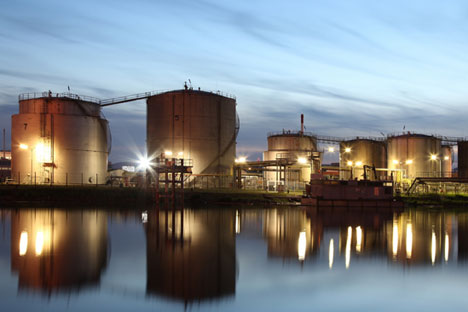 The drop in oil prices is due to the volume of reserves, according to experts.

Shutter Stock/Legion Media
The low price of hydrocarbons has led to record-breaking filling of storage facilities in Europe and the United States, Goldman Sachs data indicates. Though the report predicts a sharp decline in demand for oil, posing a threat to the Russian economy, Russian analysts do not expect panic in the oil market.

Oil storage facilities in the U.S. and Europe have tanked up to record levels because of the continued slump in the price of crude. Oversupply may lead to a drop in oil demand and a consequent further decline in crude oil prices, Goldman Sachs analysts recorded in a research report published on October 27.

“This raises the spectre of 1998 [and] 2009, when distillate storage hit capacity, pushing runs and crude oil prices sharply lower," warned the analysts at the U.S. investment banking multinational.

This would represent a serious threat to the Russian economy. According to a report by CitiGroup, a fall of $10 a barrel in oil prices will lead to a reduction in GDP of 0.8 percent.

This is not the first time Goldman Sachs analysts has scared the market with forecasts of falling oil prices, said Georgy Vashchenko, head of Russian stock market operations at the Freedom Finance investment company.

"From their recent forecasts, the price could reach $20 a barrel and remain at that level for decades," he said.

The drop in oil prices is due to the volume of reserves, explained Vashchenko, but this is the opposite of causation: Reserves become greater because of falling prices, and not vice versa.

According to Pyotr Dashkevich, an analyst at the investment company UFS, stocks are growing because of concerns of possible supply disruptions from West Asia.

"There is no guarantee as yet that it necessarily will result in a massive 'release' of oil in the market," he said.

But quotations are already responding to another batch of negative forecasts: On October 29, Brent crude oil fell by 1.57 percent to $48.3 per barrel.

According to Vashchenko, the period of low prices has already lasted for more than six months; ample time for consumers to fill their storage facilities to the brink.

"All known information is taken into account in current pricing and, in particular, information on the filling of storage facilities," said Alexei Baskakov, head of the assessment department at Finekspertiza.

This will exert a slight negative pressure on oil prices, and only a slight reduction in soft quotes can be expected from the OPEC meeting due in December 2015, Baskakov said.

Effectively, the industry has two choices; either to wait for a growth in demand or reduce production, said Dashkevich.

"No one wants to reduce production so far, and it is only the most inefficient producers that leave the market, including offshore projects and some shale deposits," he explained.

Russian analysts also said that despite the forecasts, the fall in oil prices will not lead to the closing of shale deposits in the United States.

"The U.S. continues to extract oil even at $45 per barrel; the number of closed wells is very small," said Baskakov. According to Vashchenko, American deposits are profitable even at the price of $40 per barrel.

Over the last year, the volume of shale oil produced in the U.S. has barely changed, said Semyon Nemtsov, an analyst from Russ-Invest, explaining that while the least efficient companies are leaving the market, the more successful producers are taking their share.

The efficiency of production in the U.S. is growing every year by dozens of percent, and the new technologies that are in active use there reduce production costs by about $5-10, Nemtsov explains.