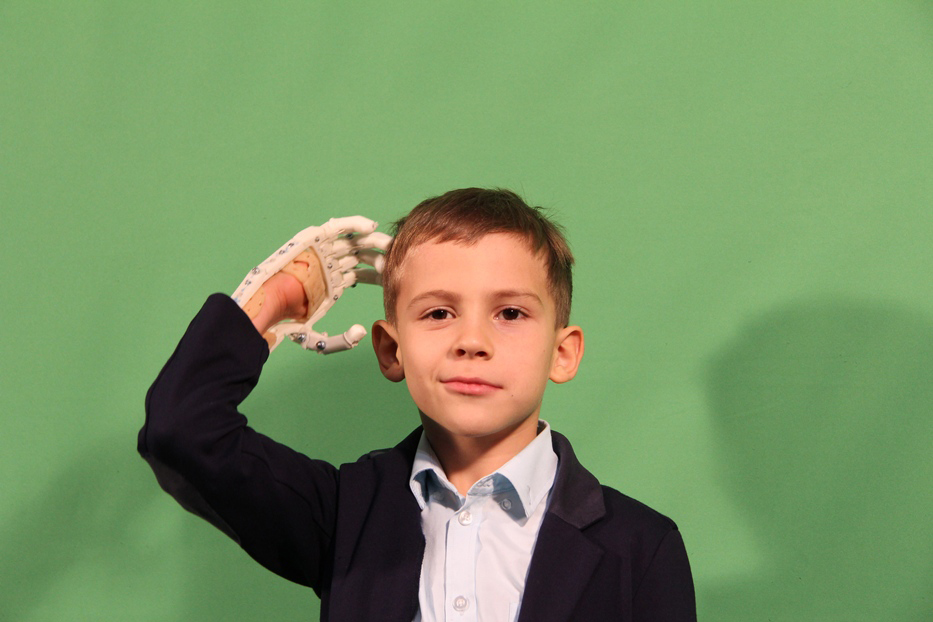 A boy with children's prosthese.

Russia's Agency for Strategic Initiatives (ASI) states that around 65,000 Russians a year require prostheses for an upper extremity, but only 14% of them actually get the artificial limb. A lot of adults do not use prosthetic arms, and adapt to living with their disability by learning to perform various actions with the other hand.

However, the situation is far more complicated with children, and kids younger than 12 require training of forearm muscles of the injured arm so it does not atrophy. So they are provided with cosmetic prostheses, but these are uncomfortable to wear and make it harder to adapt in school or within other groups.

Ilya Chekh, founder of the 'Motorika' start-up company, invented colorful children’s  prosthetics that are equipped with special holders for various things; laser pointers, audio players, skipping ropes, mobile phones, and so on. This new 'gaming side' to the invention allows a child with an injured arm to get back to normal social life more quickly, the developers say.

Alexander Konstantinov, CEO of ONDOC private medical service, believes Motorika managed to go beyond the usual borders while developing their product, by imbuing it with emotions.

Most children's prostheses available in Russia are non-moving copies of a certain part of the human arm, used to cover and disguise injuries. There are also body-powered and myo-electric prostheses. The former allow the child to grab things using the strength of his body;  their cost varies in the range of $760 to $2000.

Myo-electric prostheses use sensors to transform electrical impulses produced by voluntarily contracting muscles within a person's residual limb into movement. Their cost ranges from $19,000 to $38,000, and they are only available abroad. Only a handful of Russian children can afford prostheses of this kind, and most of them only acquire those with help from various charitable funds.

When surfing the Internet, Ilya Chekh, who has a degree in robotics, once noticed a request from Can-Touch.ru, a company specializing in industrial 3D-printing. The company was planning to print several children's prostheses as part of a charity project. Chekh decided to take part in it.

'We developed the first version of their prosthesis. We printed it, finished it, and started getting feedback from patients and doctors. Then we understood that the lack of prostheses for children was a real problem,' he recalls.

Motorika later managed to convince Russia's Social Insurance Fund to back the project by providing the total cost for each prosthetic acquired by the patients.

Chekh said his company can currently produce 200 to 300 prostheses a year, with a possibility to raise production up to 1,000 a year. Motorika's lab employs five people in all. They assemble the prostheses, with the components being 3D printed.

The production process of the components is quite simple: a white powdery substance called polyamide is heated by a laser and used to cut various parts. The cost of a single prosthesis ranges from $900 to $1,300.

Chekh patented a line of body-powered children's prostheses dubbed CYBEY in 2015. At the moment, Motorika offers six separate products with different attachments. Last October, the company's engineers made an artificial limb with two holders; one for a skipping rope, and another for an MP3 player; for Anya, a seven-year old girl from Krasnodar Krai.

“Nowadays, people express themselves through their appearance, and prostheses are no exception,” Chekh said. “Being a 'cyborg' is trendy, and kids can use their prostheses as an advantage while playing and communicating with their peers.”

“CYBEY gives those kids a chance to communicate more easily with their peers and to feel confident when being among them”, said ONDOC CEO Konstantinov.

“The uniqueness of this product, as well as its competitive price, give the project a great opportunity to reach the international market.”