Russian innovations for the future from Innoprom 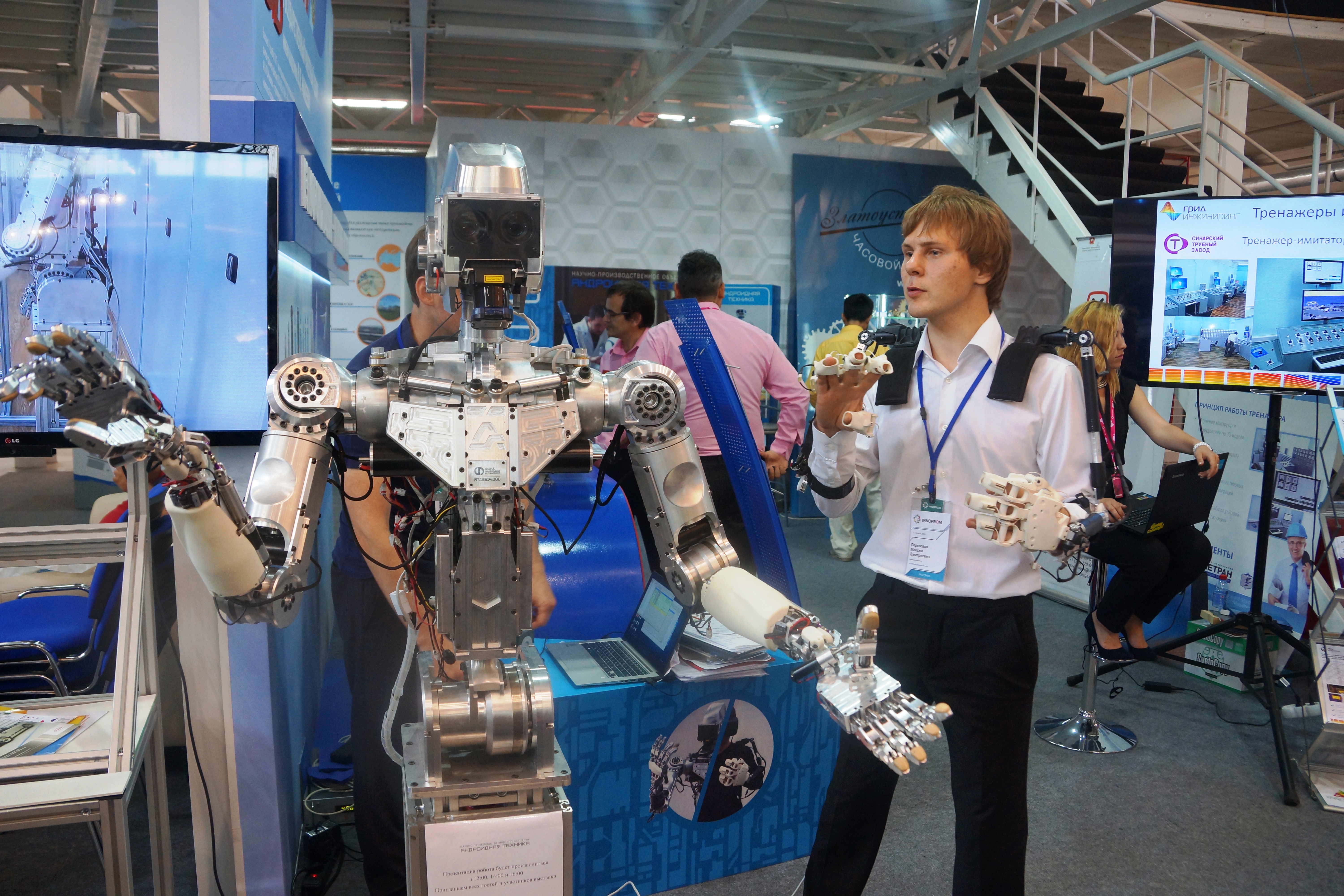 Дарья Кезина
Innoprom was held in the city of Yekaterinburg (880 miles east of Moscow) between July 10 and 13. The international exhibition gathered technology entrepreneurs and state officials from 95 countries. We have selected five of the most interesting Russian tech innovations from among those exhibited.

Android Technology, designer of the ‘Rescuer’ anthropomorphic robot, is a high tech equipment supplier to the Russian defence sector. Most details, therefore, are secret.

What is known, however, is that the robot could be called a "universal soldier,'' capable of rescuing people from cave-ins. It can also extinguish fires, and work in dangerous areas like chemical or radioactive facilities. The ‘Rescuer’ can be guided using a special suit located anywhere in the world, with a reaction delay of one millisecond.

Alfia Sirazetdinova, Android Technology's representative, said the robot would be able to participate in international robotics competitions to prove its superiority to competitors, with necessary permission from the Russian Defence Ministry.

The smart fire-extinguishing module developed by Innovational Fire Safety Systems is integrated with the Internet. It can service itself and report any faults via SMS, email or app.

The device will still work and put out fires, even if the electricity system fails. The modules are already available at FSB offices, Sberbank branches and supermarkets.

"At the Leningrad nuclear power station, for example, it previously took the inspector 90 minutes to check the fire-extinguishing system's efficiency. Now, however, he can use a mobile application to immediately see the state of the 40 modules, the last time they were serviced and what must be done," explained Sergei Lektorovich, director of Innovational Fire Safety Systems.

The module's exterior is a high-pressure container similar to the one used for moonwalkers.

The Moscow Company ‘T8’ exhibited equipment to send one of the longest and largest digital signals in the world. The device can send a signal of 8 terabits per second through an optical fibre. This means that in one second you can send 1,600 HD films over a distance of 4,000 kilometres.

This innovation has helped the company become one of the top four in the world in the production of such equipment, along with competitors from China, Finland and the U.S.

"Our equipment significantly reduces clients' construction and service costs," said Konstantin Marchenko, T8's deputy general director. The company is entering foreign markets such as Iran and Vietnam, and negotiations are on with India and Indonesia.

T8 also displayed a security and surveillance system called the ‘Dunai vibro-acoustic sensor’. This can control fibre optic segments at a distance of between 40 and 75 kilometres. The acoustic microphone can hear everything and, in the event of danger, it sends an alarm signal.

The device was developed to provide security for oil and gas pipelines, but it will now also be used in Russia to control plane takeoffs and landings, and to observe the condition of railway networks and train movements. The sensor can detect a cracked rail, or a damaged plane wheel bearing and other defects, because these produce distinct sounds, that differ from general background noises.

The company Monocrystal had synthetic sapphires on display. Last year the company cultivated the biggest sapphire in the world, weighing in at 300 kilogrammes. Other companies in the United States and China have only been able to grow a crystal weighing 100 kilogrammes.

Sapphire is the second hardest material in the world after a diamond. A sapphire can basically not be scratched, which is why it is used for camera lenses and smartphone screens.

The company exports more than 98 percent of what it produces. According to the Yole Development analytical agency in France, one out of every three smartphones in the world has been made using material from the Russian company.