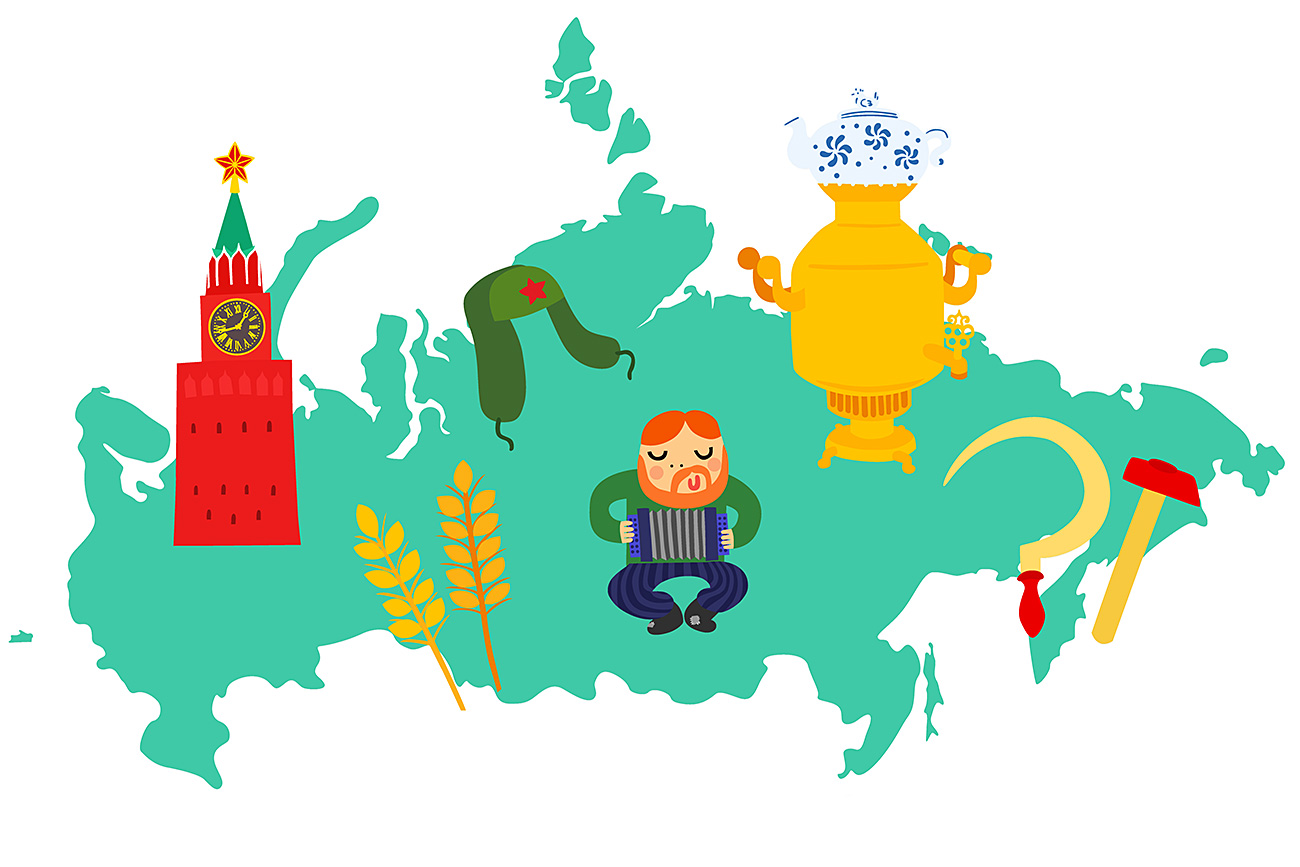 Legion Media
Can you learn Russian grammar by rapping? What happens when a Russian footballer wants to become a professor? We read some Russian language textbooks books to find out.

In Russia, one always has attractive life options! 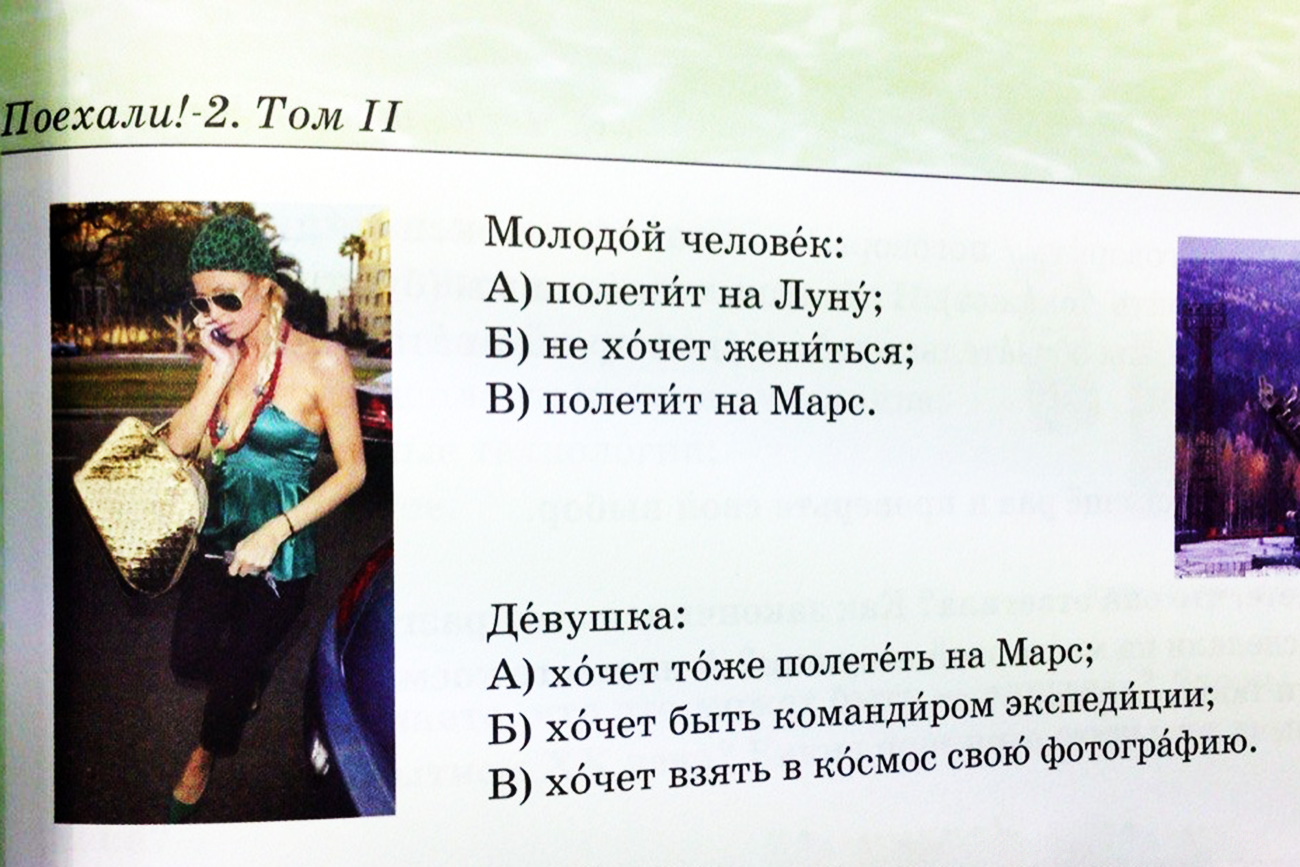 A) Will fly to the Moon

B) Doesn’t want to be married

C) Will fly to Mars

A) Also wants to fly to Mars

B) Wants to be the commander of an expedition

C) Wants to take her photo to outer space 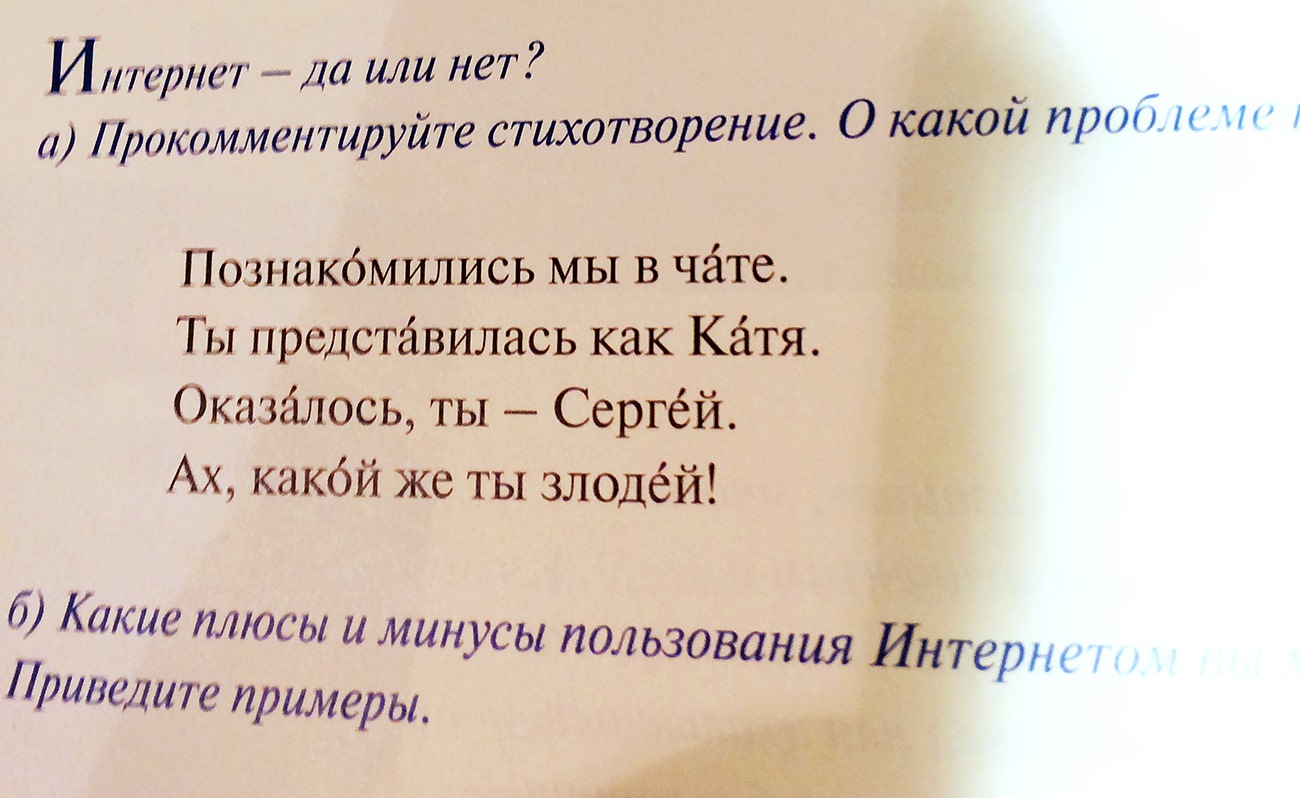 We met on the Internet,

You introduced yourself as Katya,

But it turned out you are Sergei,

Ah, you are a villain! 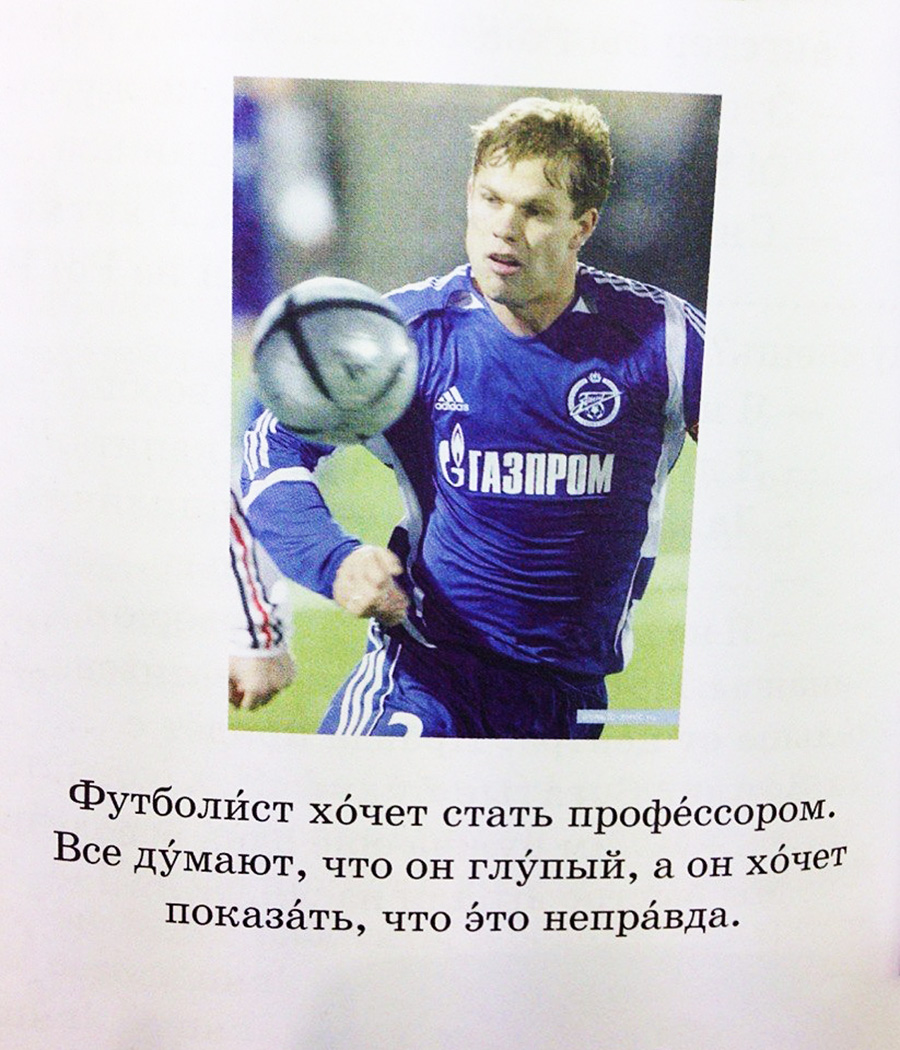 A soccer player dreams of becoming a professor. Everybody thinks he is stupid, but he wants to show them it’s not true.

Don’t be afraid to try something new

What is the dish named “imambayildi?”

BBQ parties are fun if you can afford them 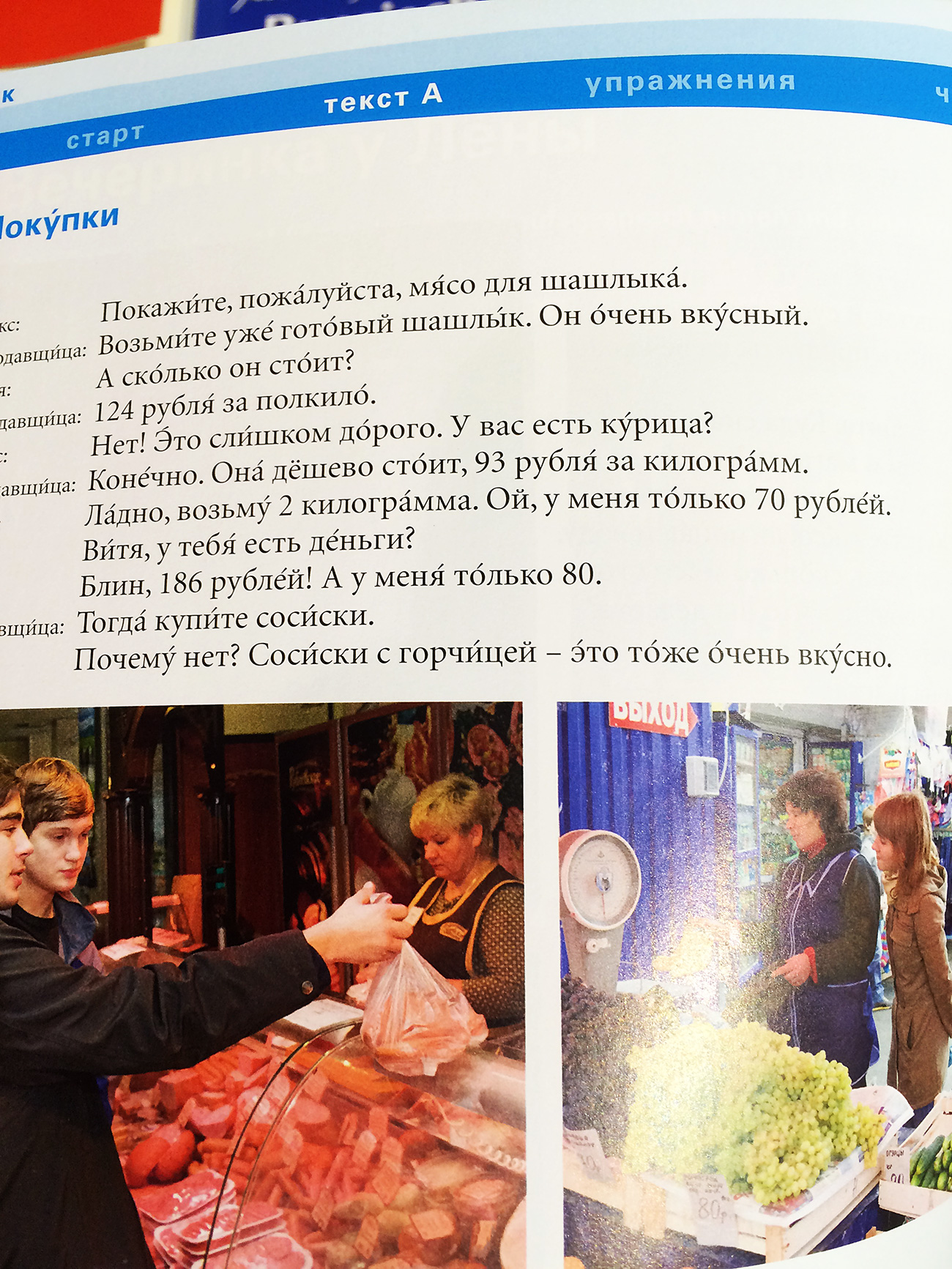 -Can I have a look at the meat for shashlik?

-How much does it cost?

-No! That’s too expensive. Do you have chicken?

-Vitya, do you have money?

-Then, pals, you can take sausages.

Why not? Sausages with mustard are also very tasty.

Get creative with your studies

-Yay! Today we’re having an unusual lesson, we will study grammar by rapping and that’s how we will learn everything quickly, yo!

-Will Ira and Vitya also attend kapustnik? (literally "cabbage festival"  -  sketch show prepared by friends and performed to each other. It includes activities like dancing and singing).

In fact, Russians just read rap all the time it seems 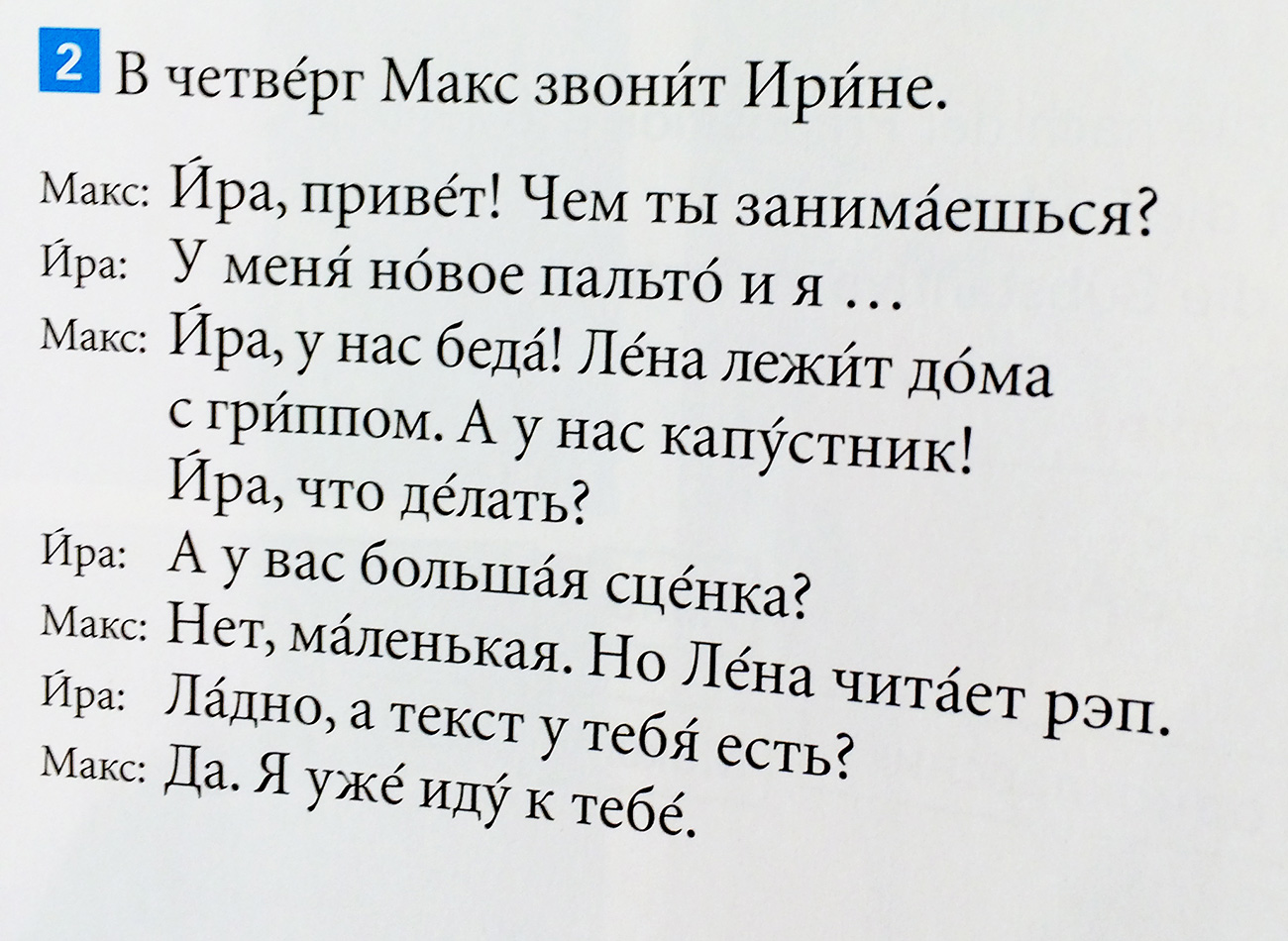 -Hello, Ira! What are you doing?

-Ira, we are in a trouble! Lena is sick at home. She’s got a flu. And the kapustnik is due soon! Ira, what shall we do?

-So do you perform a long scene?

-No, a small one. But Lena is rapping in it.

‘Comrade’ is a really casual way of addressing anyone (actually, it’s not) 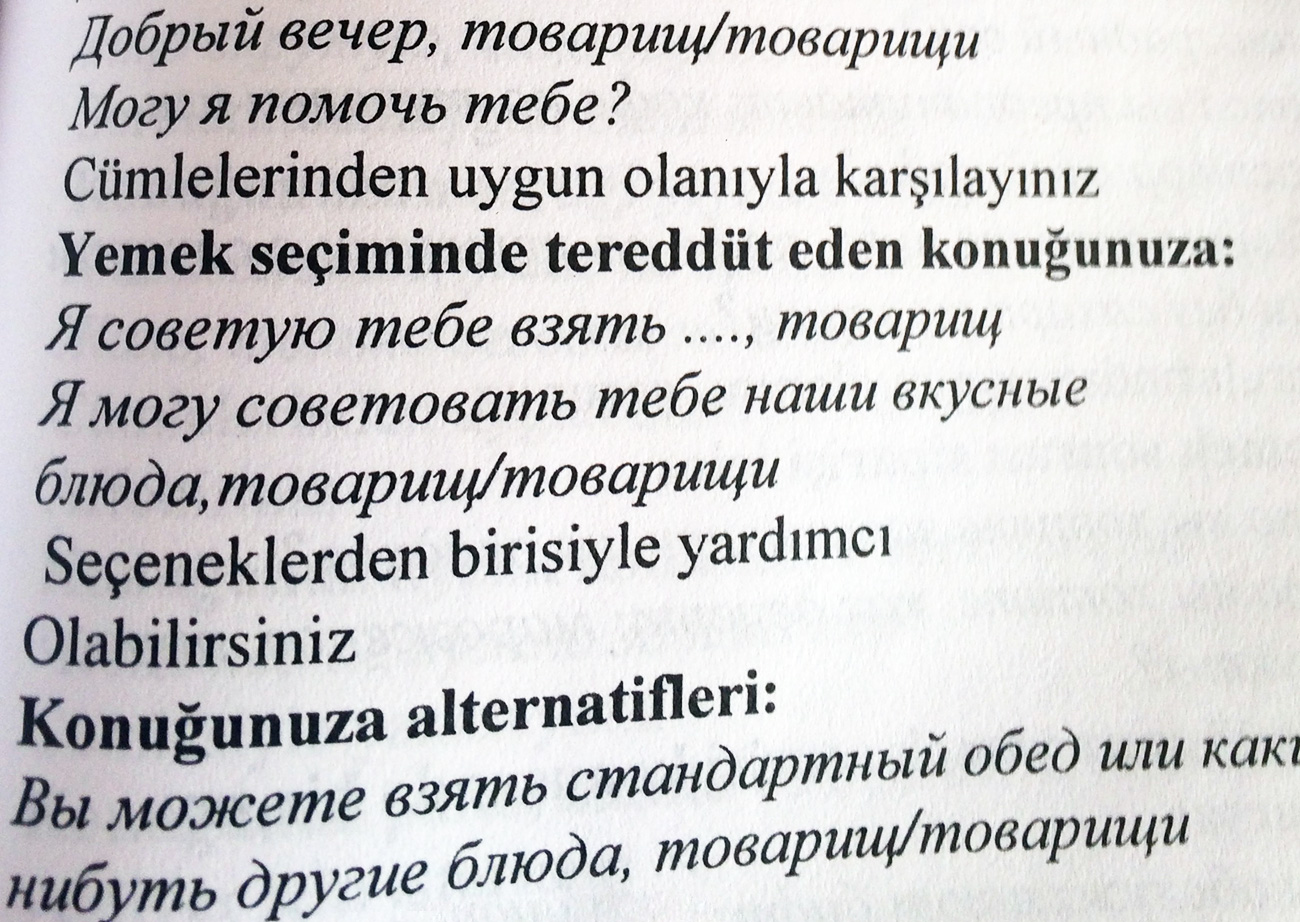 -Good evening, comrades! Can I help you?

-I recommend you to try our tasty dishes, comrade!

You may love Moscow or you mom, but firsts things first… 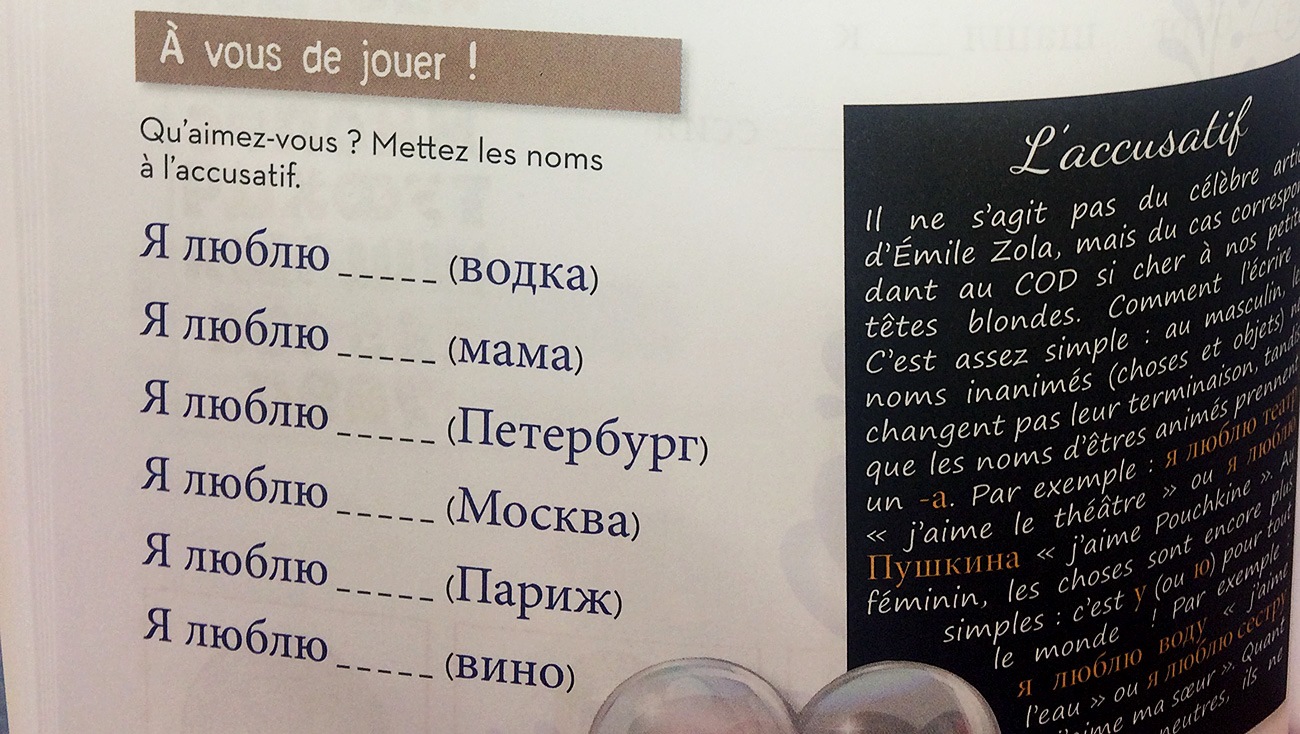 Because vodka helps you to deal with depression, apparently 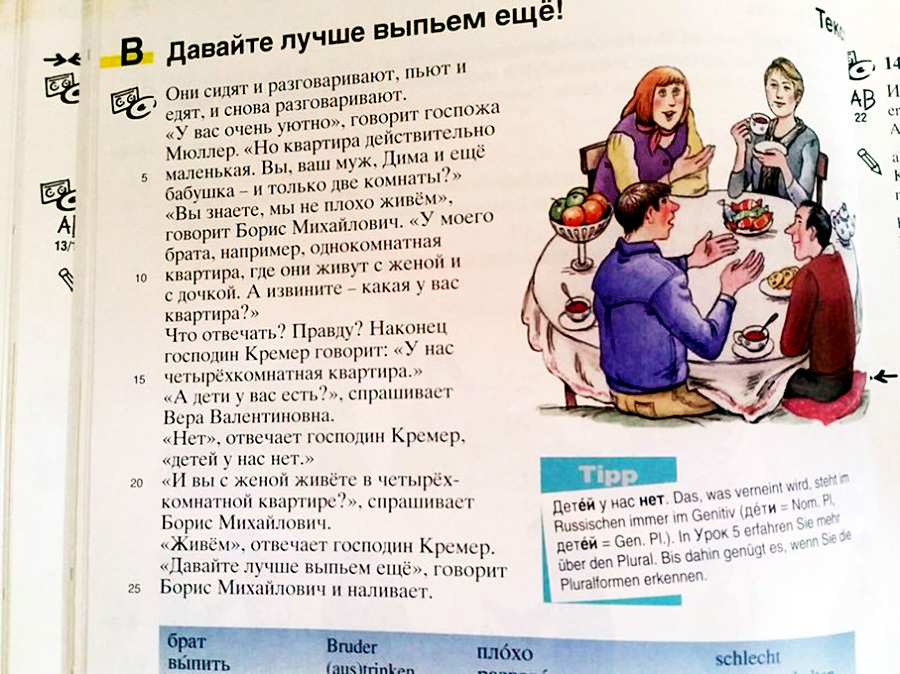 They are sitting and talking, drinking, and eating and then talking again. “Your place is very nice,” Ms. Muller says. “But your flat is really small. You, your husband, Dima, and the granny – and there’re only two rooms for all of you?”

“You know, life is not that bad,” Boris Mikhailovich says. “For example, my brother has a one-room flat where they live with his wife and daughter. Pardon me - how big is your flat?”

Be careful with what you wish for 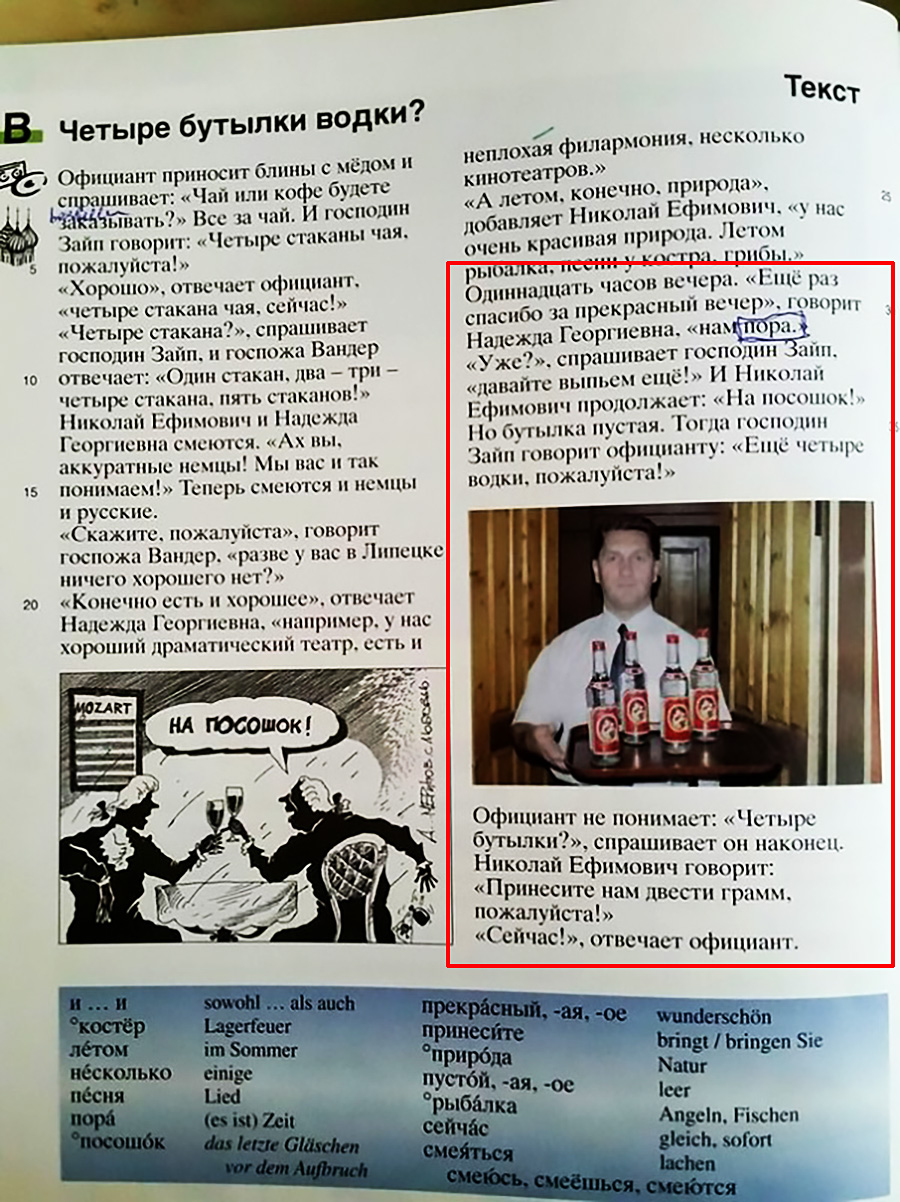 It’s 11 p.m. “Thanks again for the wonderful evening,” says Nadezhda Georgieva, “Now we have to go.”

But the bottle is empty. Then Mr. Zayp says to the waiter: “Four more vodkas, please!”

The waiter doesn’t  get it: “You mean four bottles?” he asks. Nikolai Yefimovich says: “Bring us 200 grams, please!”

Here’s a crash course in manliness 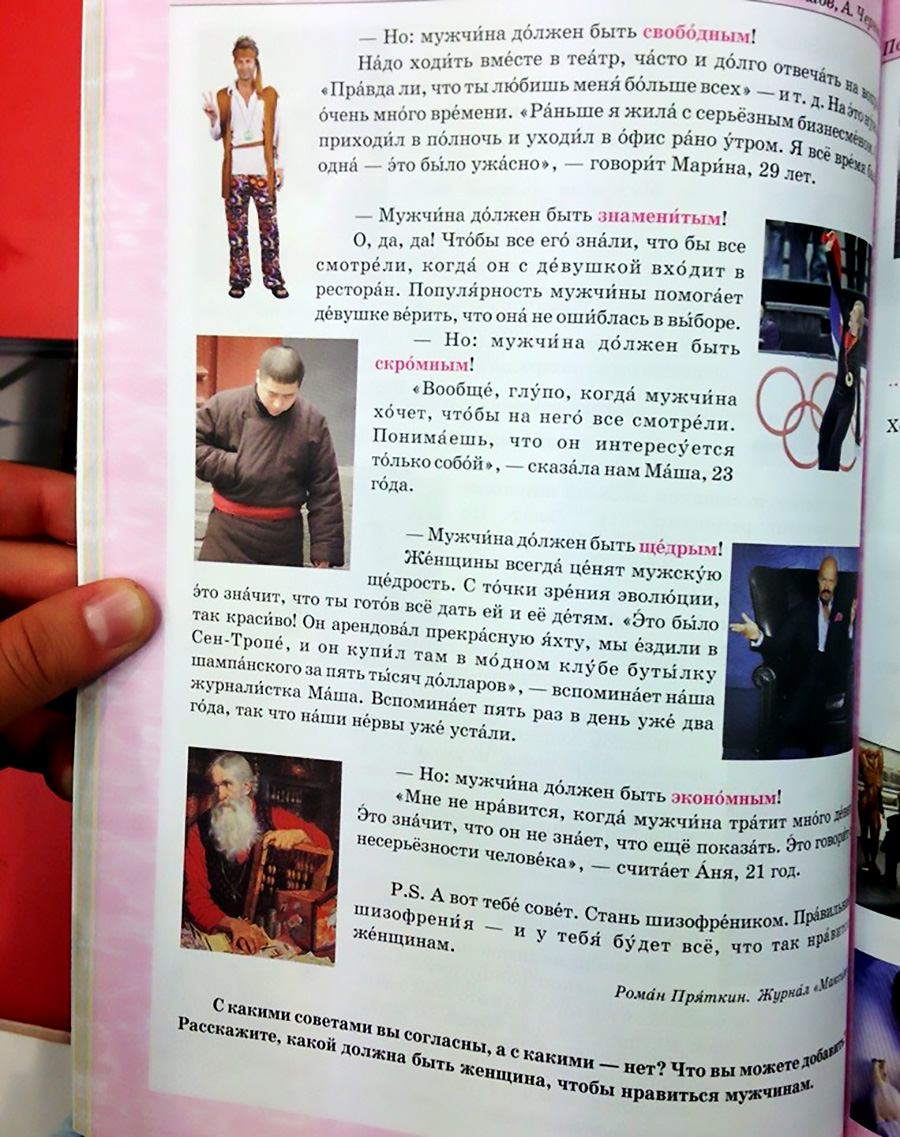 A man should be free!

He has to go to the theater together with his significant other. He should frequently and thoroughly answer questions like: "Is it true, that you love me more than everyone?" etc. It takes much time. "I used to date and live with a serious businessman, he usually came home at midnight and left early in the morning. All the time I was alone – it was terrible," says Marina, 29.

A man should be famous!

Oh, yes, yes! So that he would be known by everyone and all eyes are on him when he enters the restaurant with his girlfriend. With her man being famous it helps the girl to believe that she made the right choice.

But: A man should be modest

“Actually, it’s stupid when a man wants everybody to look at him. You understand that he’s selfish,” says Masha, 23.

A man should be generous!

Women always appreciate generosity. Consider it an evolutionary instinct, it means that he is ready to give everything to her and her children. "It was so beautiful! He rented a beautiful yacht, we went to Saint-Tropez, and he bought us a bottle of champagne for $5,000," recalls Masha, a journalist. She has been recalling it five times a day for two years already, so our nerves are shot.

But: A man should save money!

"I don't like it when a man spends a lot of money. It means that he doesn't know what else to show. This shows him as frivolous", says Anna, 21.