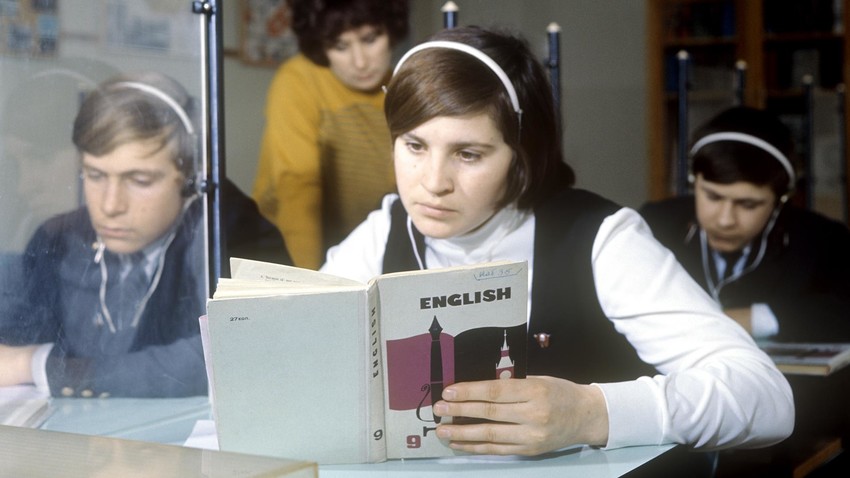 Dmitri Kozlov/Sputnik
Learning a foreign language is like learning to play an instrument. It takes time, practice and effort. But what if you get the hang of it, but have no one to “perform” to? That’s the story of millions of Soviet students, who studied English while knowing that they would never have any real chance of going to any of the countries where people actually spoke English. Luckily, they couldn’t have been more wrong.

There is a remarkable scene in the iconic 1963 Soviet movie ‘I walk around Moscow’, where an aspiring young writer from Siberia laments to Nikita Mikhalkov’s character about how he’s struggling with his command of the English language. “Having studied it at school for many years, I still don’t understand a word of English,” Volodya Ermakov moans. In another scene, a waiter from a downtown Moscow café starts his morning routine with an English-language course played on a vinyl turntable. 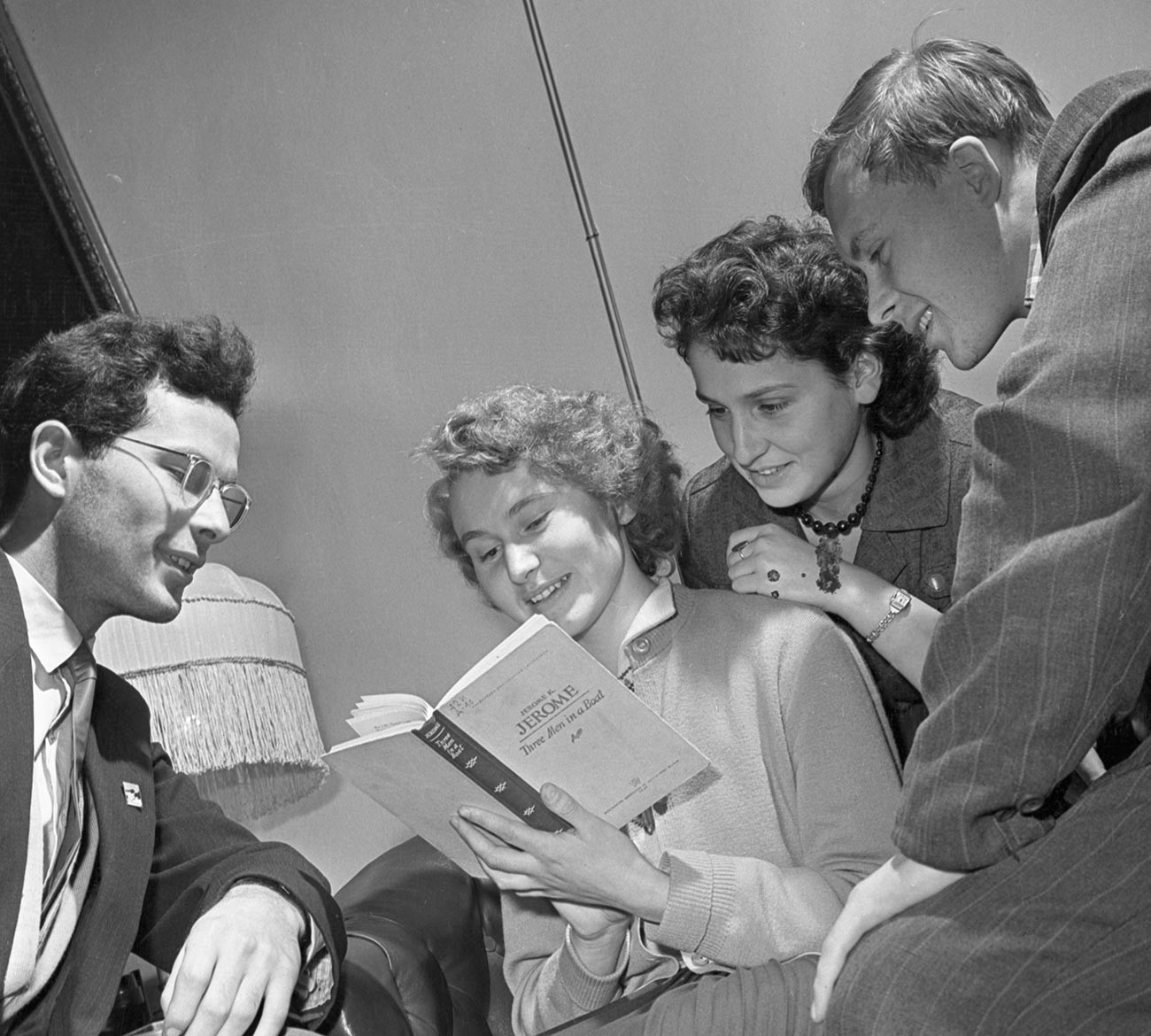 Both episodes reflect a real cultural trend. In the early 1960s, during the Thaw, language learning became a central plank of the foreign policy in the USSR. Things got off to a promising start with the release of the Council of Ministers special decree. It was called ‘On Improving Learning of Foreign Languages’. According to the document, the Soviet Union was expanding and strengthening its international ties with the world. Therefore, some knowledge of foreign languages by specialists in various fields, as well as ordinary citizens, would be beneficial, it said. 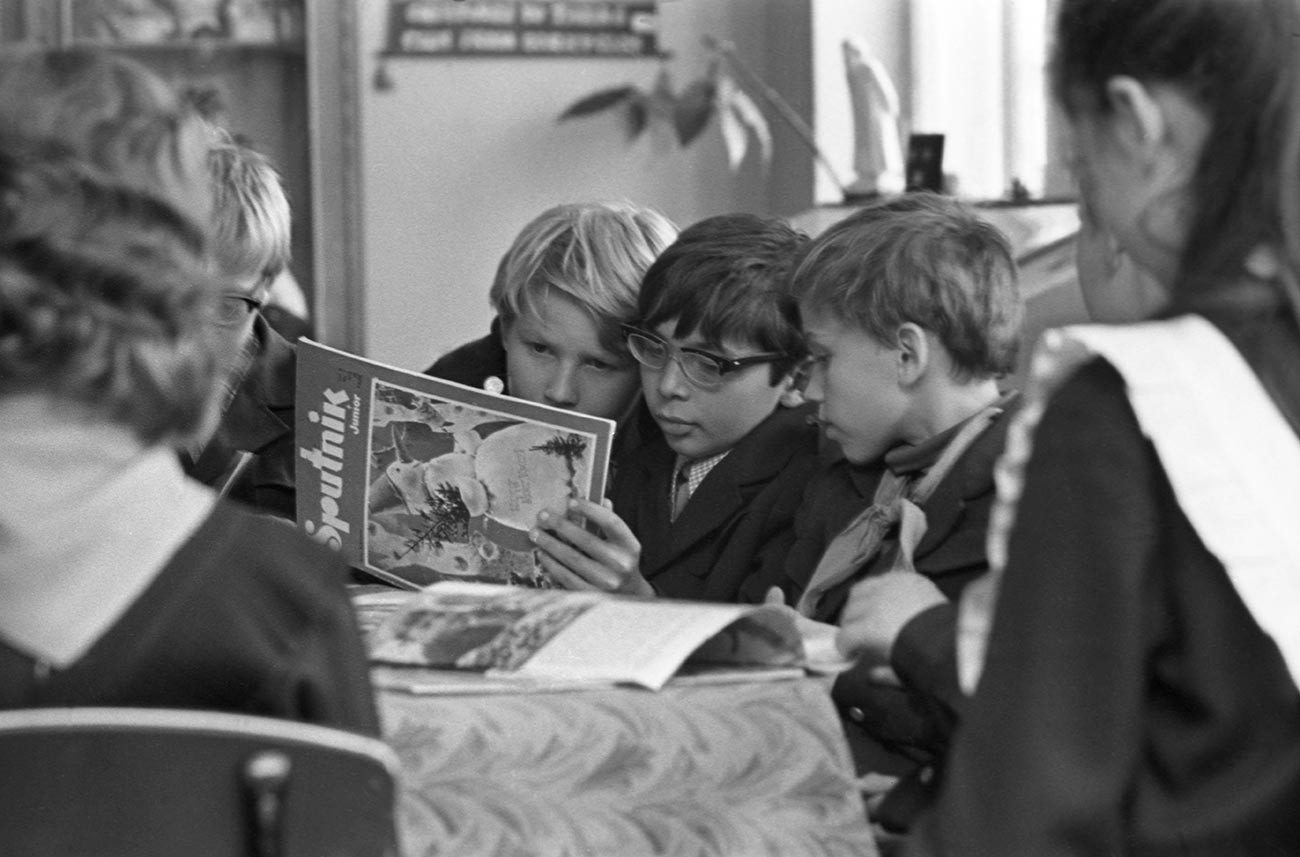 Schools offering intensive English training began to mushroom throughout the country during the cultural thaw of the Khrushchev years.

Schools offering intensive English training began to mushroom throughout the country. The fruit of these educational efforts could hardly be felt, however. A number of factors undermined the linguistic campaign, including a lack of practice, interest, and commitment. 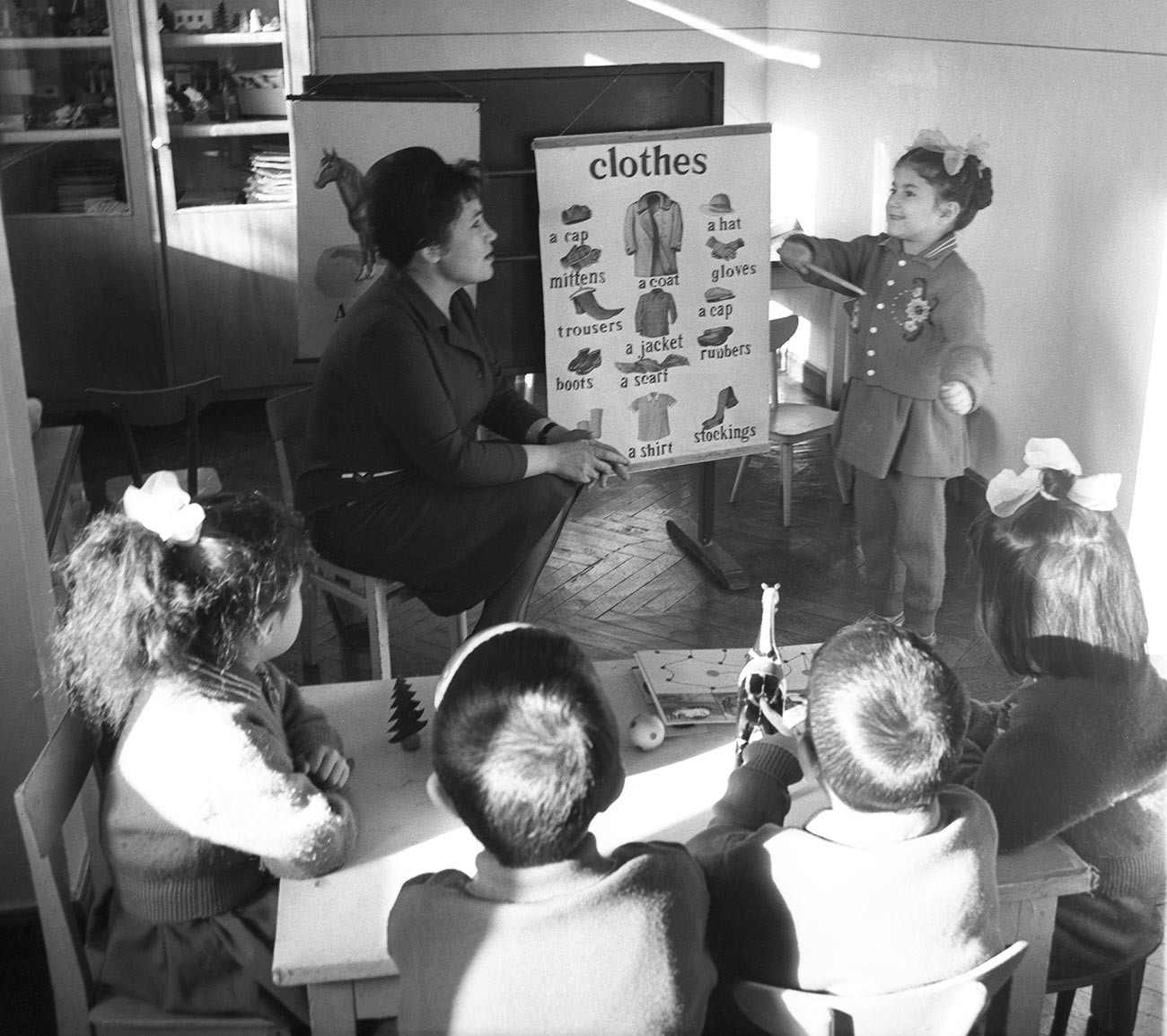 It’s common knowledge that young kids learn foreign languages more quickly than adults. Between 1930 and 1950, English, German and French were taught as a second language at Soviet schools. So what prevented Soviet students from communicating successfully? Perhaps the fact that teachers tried to force children to learn by rote instead of fostering an interest in the foreign culture that each language represented. 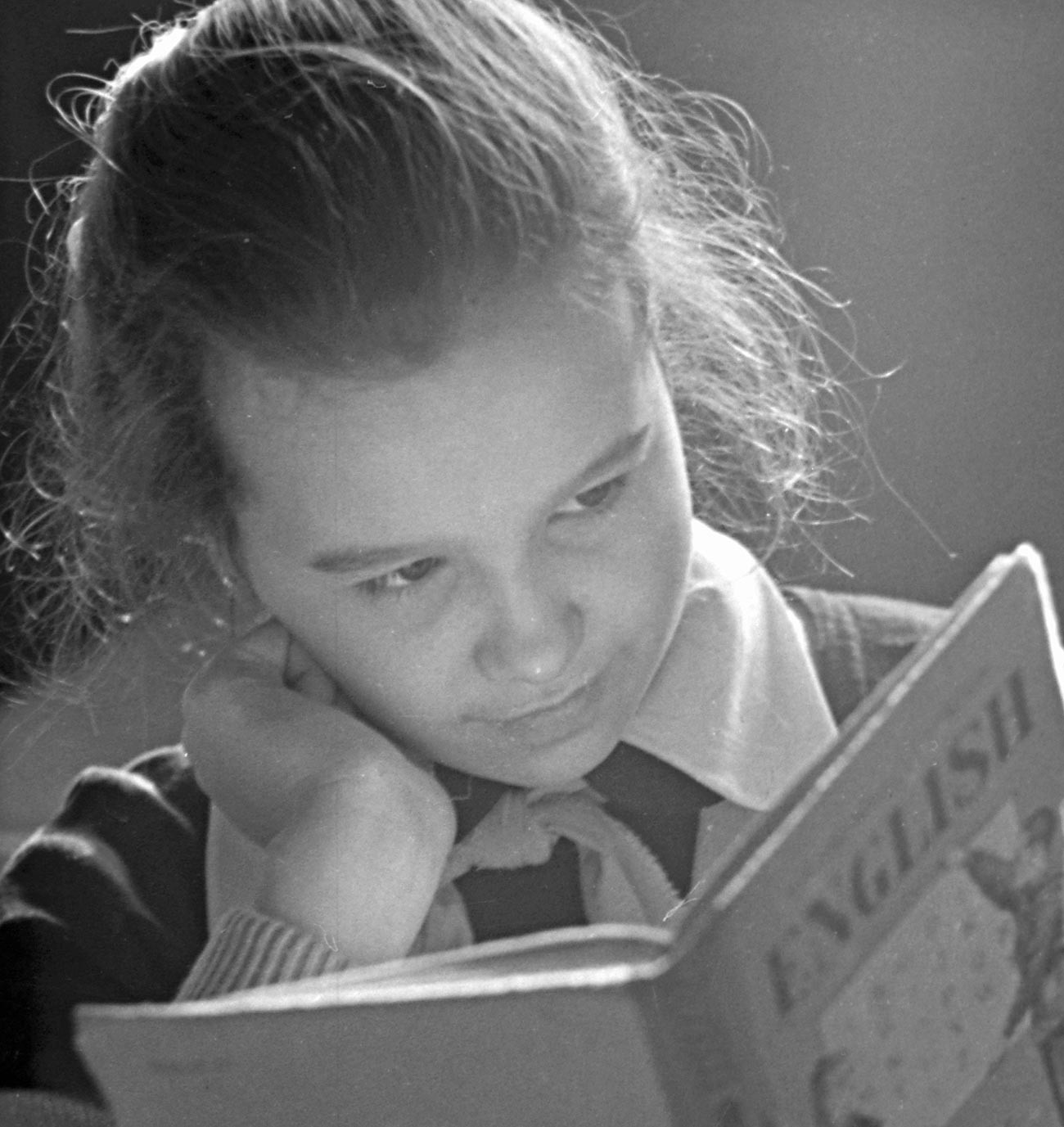 “I didn’t want to learn a foreign language at school. I cried my heart out, because I thought that if I speak a foreign language, no one would understand me and that would be a disaster,” Natalia, 69, recalled.

An absolute majority of Soviet people were not allowed to travel abroad and had no opportunity to polish their language skills. They basically couldn’t practice the foreign language in a natural environment, with a native speaker. At the end of the day, their English was basically a dead language, like Latin. 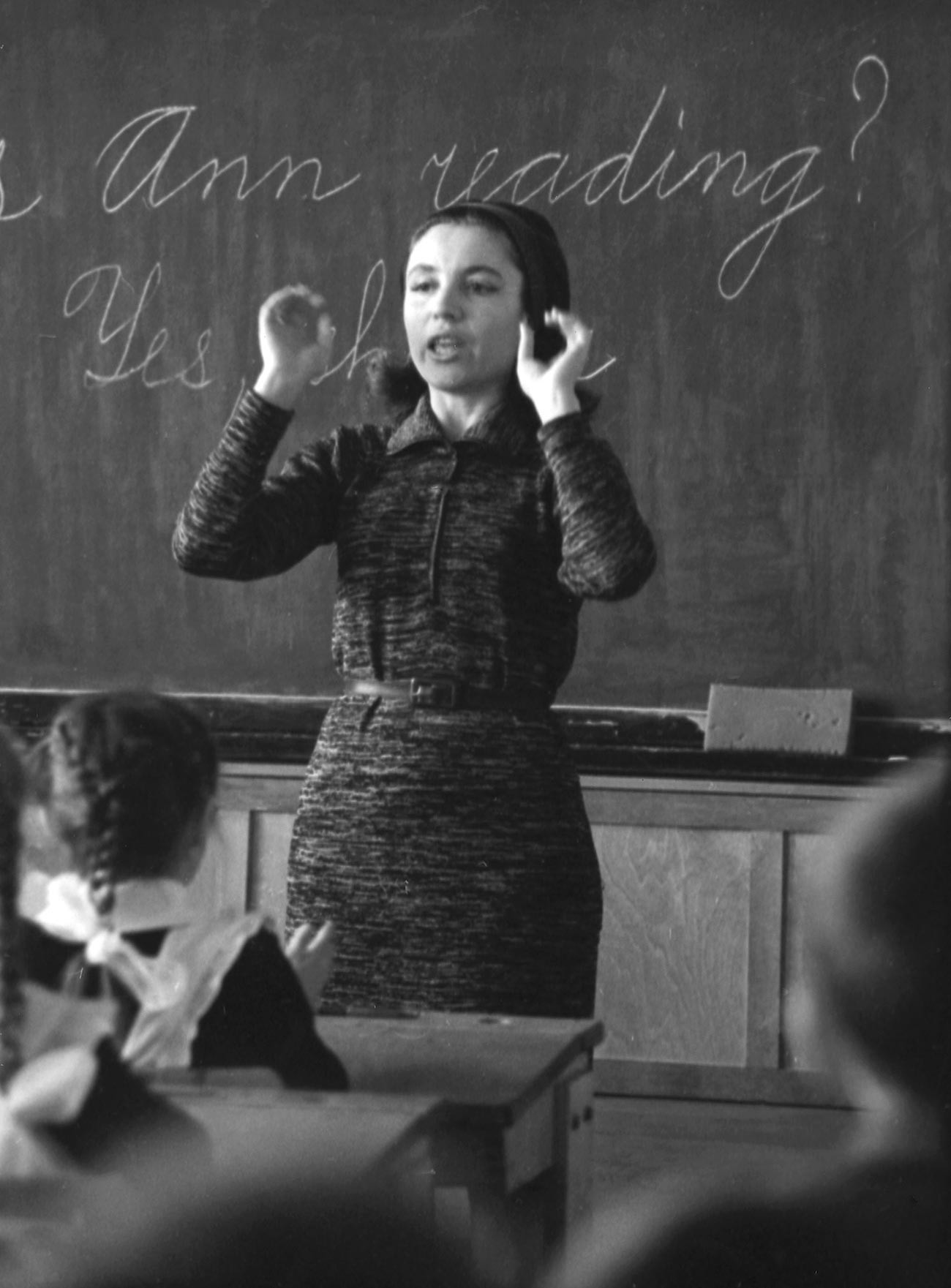 In the early 1960s, during the Thaw, language learning became a central plank of the foreign policy in the USSR.

According to the old Latin saying, “Scientia potestas est”, knowledge is power. Apparently, it took one determined woman named Natalia Bonk to boost English language studies in the whole of the USSR. Bonk would embark on a life’s work dedicated to the promotion of the language of Shakespear in the Soviet Union and subsequently create a textbook that would become the golden standard in the industry. At the time, the brilliant and promising Moscow-based linguist had never stepped outside the USSR. After majoring in English, she began to teach at the Ministry of Trade language courses. One afternoon, a senior teacher sat in on a class. When the lesson was over, he wondered where Bonk had found her English grammar exercises. Natalya replied that she created them herself, due to the lack of material in the available textbooks. The next day, Bonk was summoned to the head of the course and asked to work on a new textbook.

READ MORE: How Russian words are ‘butchered’ in English

Her magnum opus saw the light of day in 1960. The first edition was published by ‘Globus’ communist publishing company in Austria. Bonk and her co-authors were nearly in tears when it arrived, as heavy as a brick. “We were horrified by the weight and thickness of the hardcover, asking our friends to buy the book for it to vanish from the face of the earth. For some reason, we were not horrified by the extremely ideological and very naive texts of the first editions of the book,” Bonk later recalled.

Who would have guessed that the two-volume work, written in collaboration with Galina Kotiy and Natalia Lukyanova, would stand the test of time, becoming a cult classic in its genre? 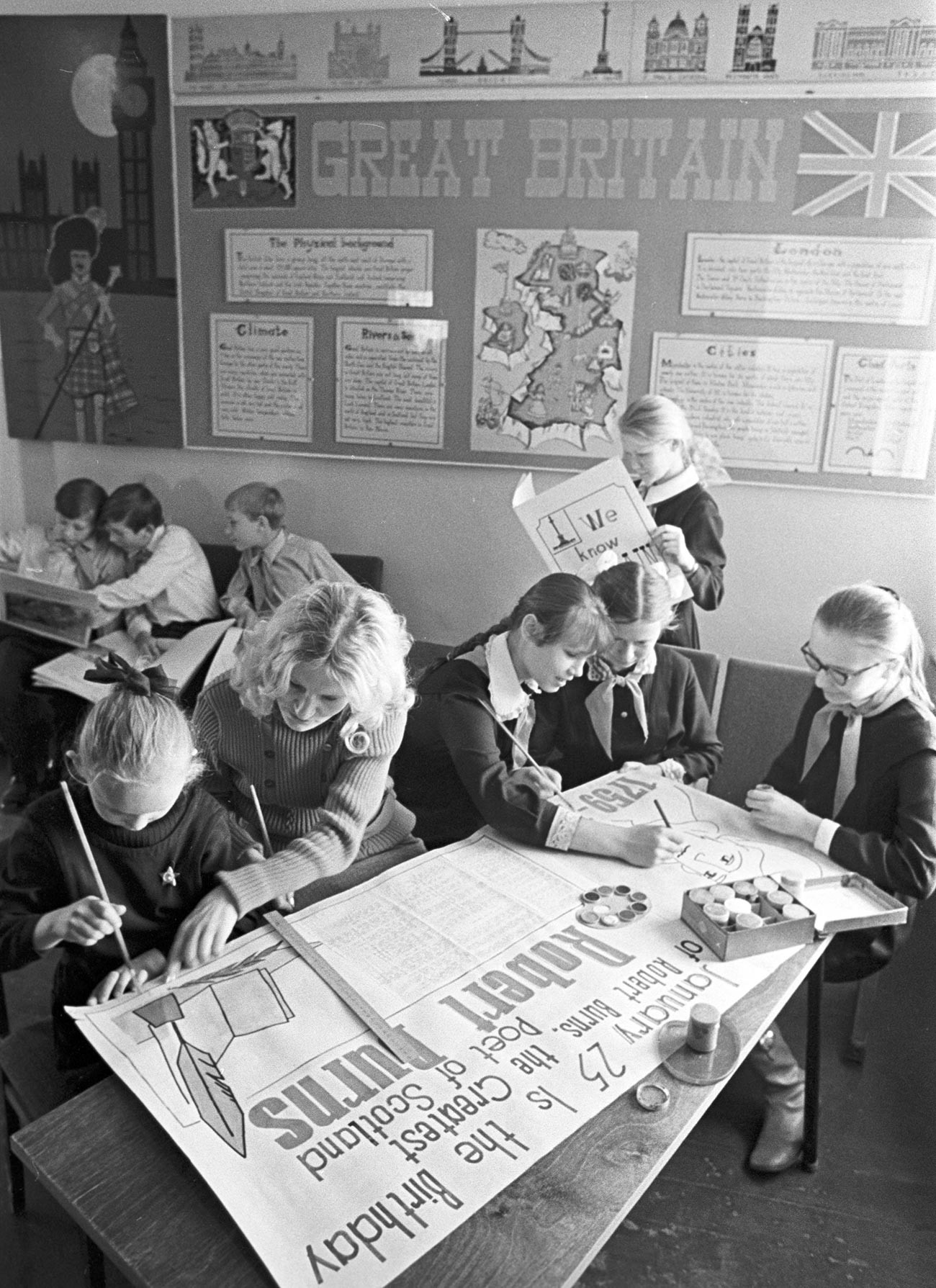 It has been reprinted numerous times since 1960, with students still describing it as a powerful tool to learn the language. The latest edition came out as recently as in 2019 and has been selling like hot pancakes in top-tier Moscow bookstores.

“I remember the Bonk book from my university years,” Vadim, 56, says. “I borrowed it from a friend ages ago, but never returned it. It was a much-thumbed book at some point. Several years ago, when I had to go on a business trip to Sweden, I flicked through the 900-page manuscript and found it useful enough. It’s good if you are looking for a quick fix or need to improve your grammar.”

The success of the textbook can be interpreted in several ways.

“It was written for people who speak Russian as their mother tongue. Therefore, the difficulties that arise in the learning process stem from the differences in the grammatical structure of the Russian and English languages, in vocabulary and phonetics. And yet, there are many similarities between the two,” the author of the textbook explained.

READ MORE: These Russians are AT WAR with English words in the Russian language

For better or worse, several generations of Soviet students learned English with Bonk’s bestselling book. For a long time, there was no alternative English-language manual that could match it in size and scope. The Bonk book became a bit of a bible for Soviet learners.

“I got hold of this two-volume textbook back in 1965, shortly after I finished university. I became an engineer and started working on some architectural projects. I needed English for work. A friend of mine, a professional linguist, told me that the Bonk textbook would give me an understanding of how language works. I found it extremely boring and repetitive, awash with lengthy texts about ‘comrades from the Soviet Union’. These days, children learn English through songs and games. Back in my days, learning a foreign language was a real torture. Nonetheless, I did my best to learn the basics of the English language with Bonk’s course book, faut de mieux,” Nina, 73, says. 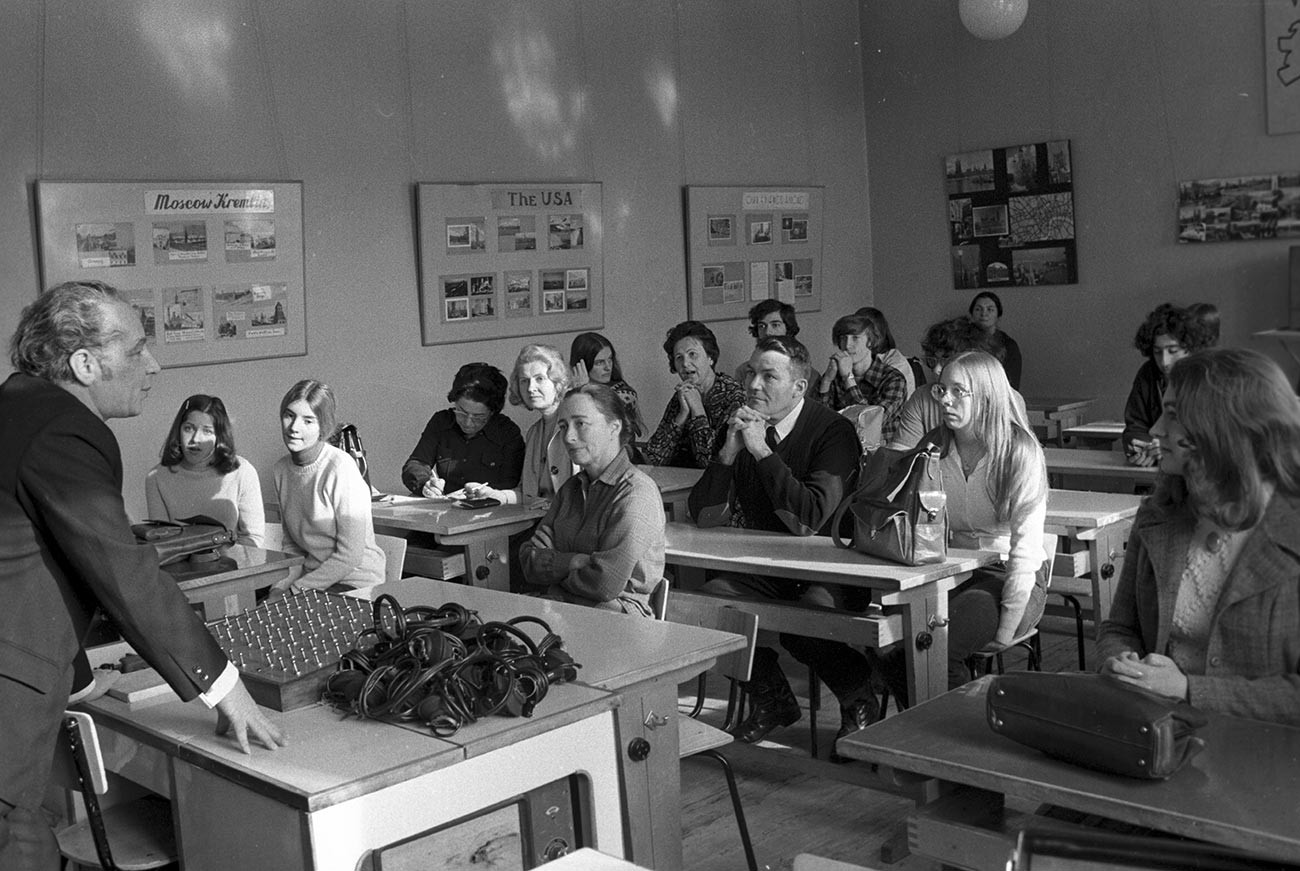 Students participate in an English as a second language class at Moscow's school number 20, which has specialized in the intensive teaching of English since 1958.

In the absence of good alternatives, some Soviet youths tried to improve their poor speaking skills by listening to whatever was on the radio. “I studied English at school, but all I could say eight years later was ‘London is the capital of Great Britain’,” Fyodor, 69, recalls. “To make up for lost time, I listened to BBC radio. My parents’ dacha was some 25 kilometers away from Moscow, so the signal was far better than in the capital. Remember, it was a time when international radio signals were effectively jammed by the communist authorities to shield Soviet citizens from the pernicious influence of the west. When I began to listen to the British Broadcasting Corporation, I didn’t understand a word. Six months later, I began to get a clue. Listening to live, free speech eventually helped me develop my language capabilities.” 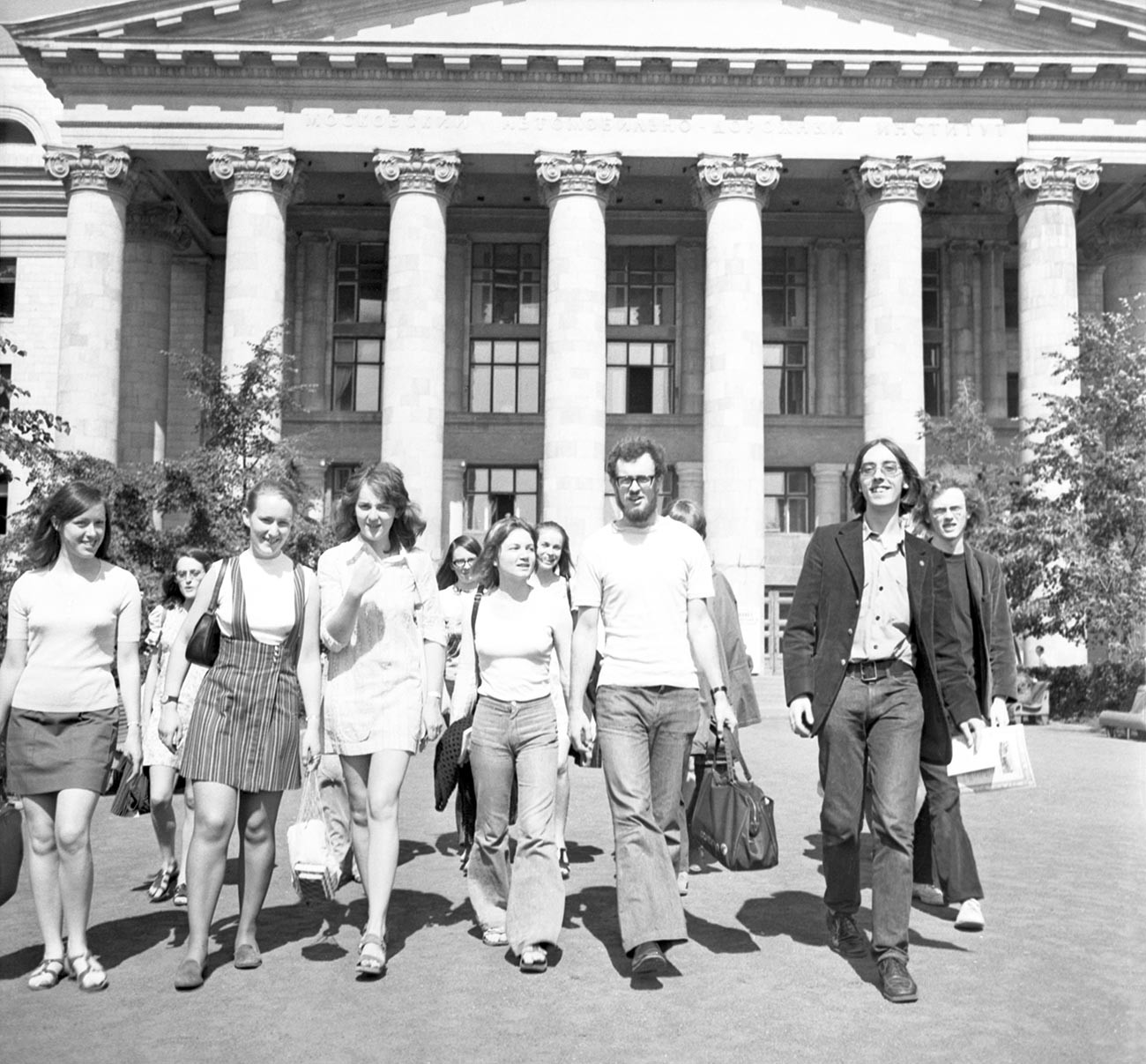 Some found that the best way to learn English was to simply play it by ear.

Radio was not the only source of English learning in the USSR. Some found that the best way to learn English was to simply play it by ear.

“I never wanted to study a foreign language,” Sergei, 56, recalled. “What for? I was pretty sure that I’d never go abroad. My mother, who worked in a publishing house, studied English at school in the 1940s, but had never practiced it. It was a common problem: there was no one to talk to. I didn’t want to waste my time learning something I couldn’t use in real life. The year 1975 was a turning point, however. I listened to the Beatles. A year earlier, the Beatles’ singles were released by the Melodiya company in the EP format. The funny thing was, the name of the band was mentioned nowhere. It wouldn’t be an exaggeration to say that I’ve listened to ‘I, me, mine’ and ‘Let it be’ a hundred times. That’s when I understood that great music and language are actually closely related.”

Soviet students who learned English as a second language often wrongly assumed that learning grammar would open all doors to them. In reality, they could barely speak the language. Their English sounded stiff because the only way to learn it was by reading books and technical literature. Real, conversational skills were nowhere to practice. It wasn’t even possible to watch a movie in English. Paradoxically enough, millions of Soviet citizens had years of language training at school but couldn’t converse in English. It was an epic fail.