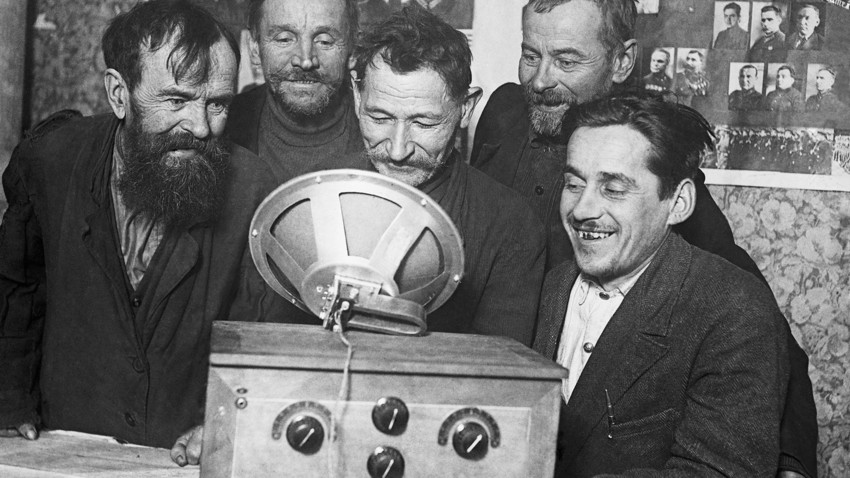 Farmers examine the first radio receiver on their collective farm.

TASS
This was the beginning of Radio Moskva broadcasting.

In summer 1922, development of the Soviet radio transmitter was completed in Moscow. Experimental broadcasting via this transmitter took place on May 27 and 29, and could be heard in Moscow, Vologda, Saratov, Samara and other cities. In Moscow, radio broadcasting was transmitted through the city's central phone station for residential apartments and the Kremlin.

On Sept. 17 at 3 p.m., the first radio concert was held directly from the Central Radio Station on Shabolovka Street. On this day, the Soviets heard for the first time the famous words, "Listen! Moscow is speaking!"

The first concert in post-revolutionary Russia featured dances by the Bolshoi Theater and famous singers of that time. This date also marked the beginning of national musical radio broadcasting.

The first radio concert was heard by residents in 60 cities, and the chance to hear music and live speech over hundreds of kilometers was seen as a miracle. Enthusiasts began to make their own radio receivers and spent hours to catch the radio signal.

Since August 1924, broadcasting was carried out regularly on a strict schedule, which was published in advance in newspapers.

Read more: What is the mysterious 'white noise' and radio signal near St. Petersburg?

Russian history media On this day