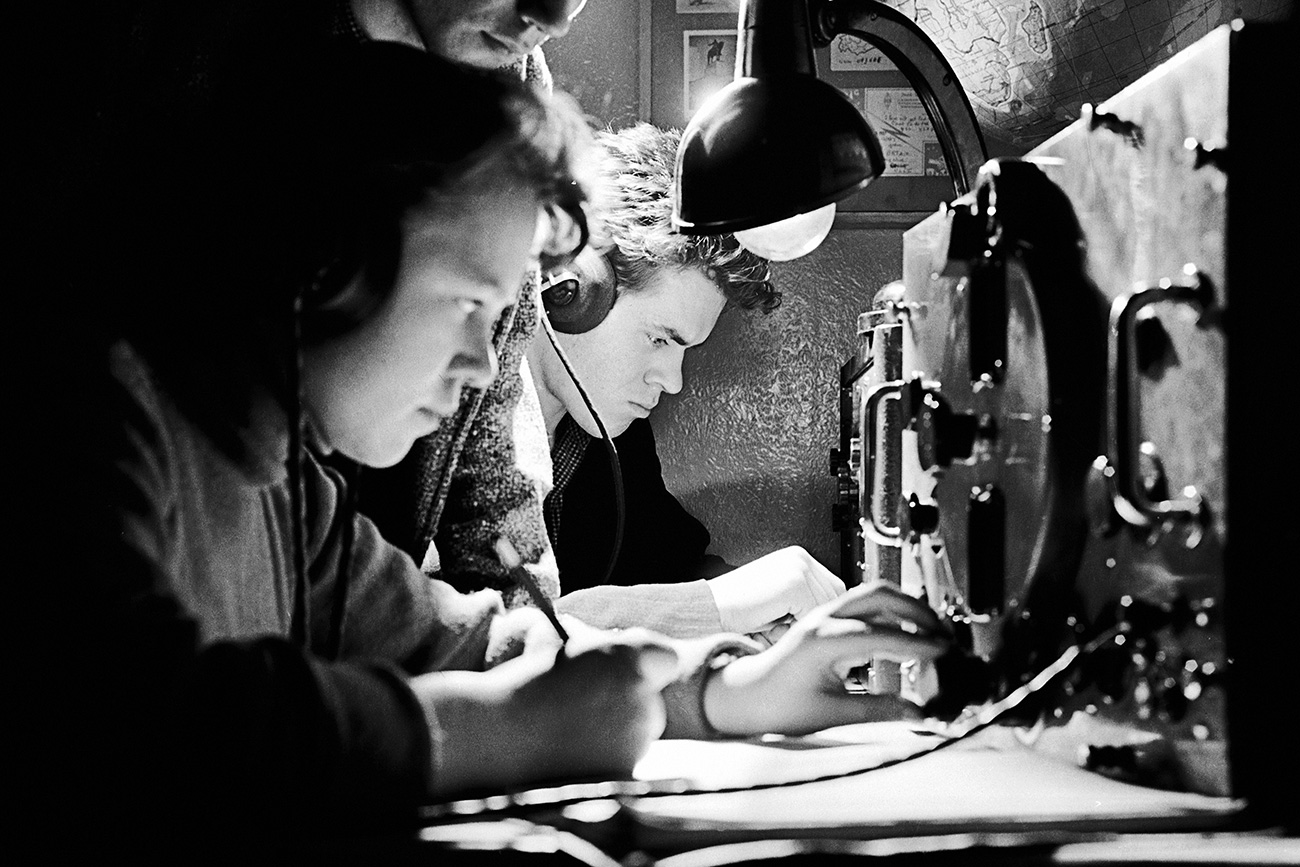 Communicating with radio hams all over the world from a radio station of the Moscow Radio Ham Club.

Tihanov/RIA Novosti
For more than 40 years a mysterious radio station in Russia has been transmitting white noise. Sometimes you can also hear numbers, names and words that no one understands. Is this a secret military base, a Doomsday machine, or perhaps aliens communicating with their home planet? Or maybe just nothing much at all?

The Russian station with the code name UVB-76 (MDZhB) is once again attracting media attention. Radio listeners call it the Buzzer, and for more than 40 years it has been transmitting signals full of monotonous buzzing and squeaking.

Sometimes a male voice breaks through the white noise and pronounces names, numbers and strange words. Judging by the coordinates, the enigmatic signal was coming from a village near Moscow, but now the source of the signal has moved to a place not far from St. Petersburg.

Usually, there is only white noise. Radio lovers monitor the radio wave, comparing it either with the horrible transmitter from the TV series, Lost, or with the setting in films about zombie fascists, such as Bunker.

The Buzzer can be used to frighten children and greatly excites those who are still waiting for the appearance of a UFO. However, more rational explanations have already been found for this anomaly.

This theory is supported by the existence of similar stations in other countries. For example, the British Lincolnshire Poacher (its call sign was an excerpt from a folk song of the same name that was played 12 times, and then the female broadcaster began saying a code), or Cherry Ripe transmitting from Australia.

They all work on low frequency waves capable of transmitting the signal far distances. This type of signal is used by ships, submarines and airplanes, and it can be picked up even in the other hemisphere.

Both stations appeared more or less at the same time, during the period of détente between the conflicting Soviet and American blocs, and it seems they use the same encryption principle. A person sending a message invents a code that only the receiver knows. Accidental listeners will just think it's complete nonsense.

For example, in 2016 during 12 months of broadcasting only 30 words could be discerned, among which were the Russian words for "billiard," "kitchen furniture," "atoll," "farming specialist" and "balcony."

Theory No. 2: Doomsday and nuclear war

The advocates of this theory believe that the Buzzer's mission consists of being in a dormant state until someone activates it in the event of a nuclear war. It is part of the Perimeter system (also known as the Dead Hand); it might be one of its screening stations and a reserve communications system.

If there are signs of a nuclear explosion, MDZhB must immediately verify this fact by monitoring a network of possible sensors. Then, the system sends a signal to the General Staff, and if an answer does not come (in this case, the system assumes that the individuals giving orders are dead and day X has arrived), then it sends a signal to submarines and airplanes to carry out a nuclear strike.

In 40 years, the Buzzer signal has been interrupted only once, and it's believed the mysterious station became silent for the first time in June 2010 and restarted work the following day, as if nothing had happened. In 2011, the Russian military announced that the Perimeter system was functioning and would be combat ready.

This is the most boring theory. The transmission is only a communication system that the army uses in the western part of Russia. The encoded announcements are orders from military departments, while the monotonous buzzing is just a marker for filling in the frequency so that no one can use it.

In 2010, listeners in this void noticed the station had changed the location of transmission and moved from the Moscow suburb of Povarovo to the Leningrad Region. Subsequently, curious radio listeners raided the forests and found an abandoned facility with fallen concrete columns for copper wires. Besides the "tourists," there were also groups of people who stripped the copper.

This theory, however, still doesn't satisfy those who believe in super-secret missions and they continue listening to the mysterious noise, discussing it in Buzzer fan communities:"At first the noise drastically changed several times in its tone, higher, then lower. Then there was a sound such as the one from an old tape player when the batteries go dead and the sound slows down. The buzzing greatly slowed and then disappeared completely for about five minutes. I thought there'd be a program. But no. Something clicked a few times and then it began buzzing with new force."

Top-secret for decades: 3 of the most beguiling Soviet-era mysteries

Forever lost: How Russians hunt for Ivan the Terrible’s library

Death in the Urals: One of the most mysterious tragedies in Russian history