A tragic fate: How was a talented Soviet footballer undone by vodka and sex? 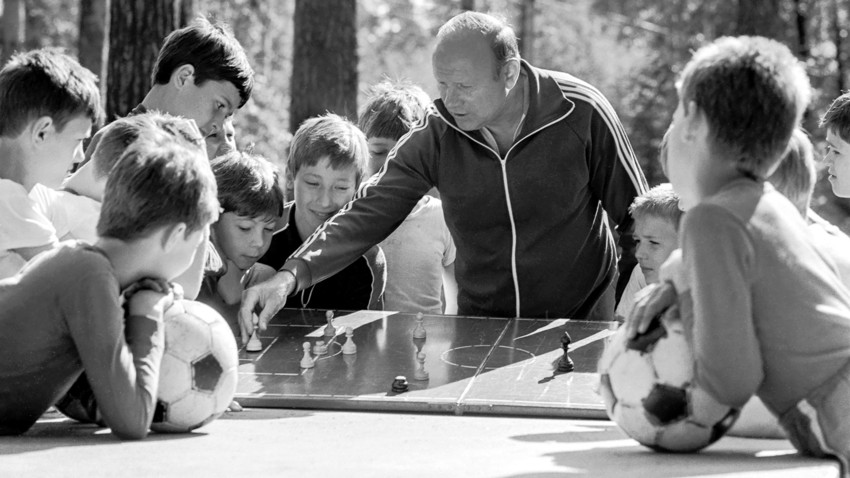 July 1, 1987. Eduard Streltsov (retired) at the studies with young players.

Albert Pushkarev, Igor Utkin/TASS
Eduard Streltsov, a legendary forward from Torpedo Moscow, was compared to Pelé in the late 1950s, but a reckless lifestyle destroyed his career. Convicted of rape, Streltsov spent five years in prison.

Fans of Torpedo Moscow used to joke: “If Pelé downed coffee as Eduard Streltsov drank vodka, he’d have died.” Streltsov was often compared to the Brazilian superstar Pelé, but he never had the chance to face him on the field.

The reason was more than sad: just a few months before his first World Cup appearance in 1958, Streltsov was arrested and convicted of rape, sentenced to 12 years in prison. Even after doing time (shortened to five years) Streltsov was banned from playing on the national team. So, how did a talented forward end up in prison?

In the late Streltsov was considered a superhero. “The key to success was simple: sports talent plus his ‘boy next door’ charm: an honest face, a warm smile... He was a miracle on the field,” wrote sports columnist Svyatoslav Vasylyk. 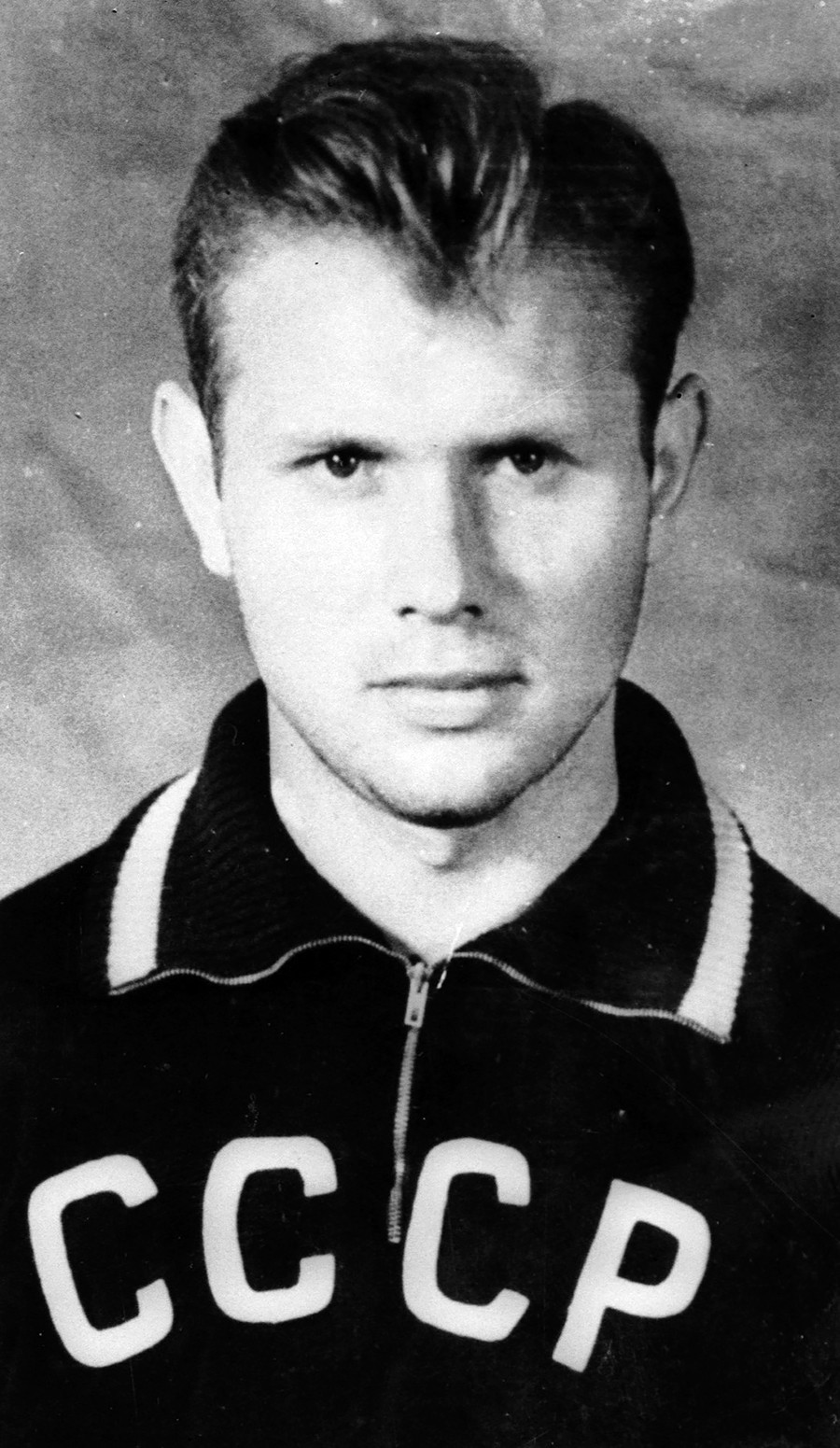 In 1954, when he was just 16, Streltsov debuted for Torpedo Moscow, and in the next he dragged the team from ninth to fourth place, scoring 15 goals in 22 matches. In 1956, Streltsov, along with the Soviet Olympic team, went to Melbourne and helped to win the tournament.

Growing up without a father, the young forward never was a stay-at-home disciplined footballer. “Once, he was late for practice for an important international match, and he had to chase the train by car,” sports journalist Petr Spektor recalled.

Another time, in February 1958, the forward spent several days in a police station for a drunken fight. “But he was forgiven, and they let him back on the national team,” Spektor wrote. Two months later, however, Streltsov got himself into even more serious troubles.

“Dragging me to bed”

On April 25, 1958, Streltsov and two fellow footballers went to a friend’s dacha with four young women. One of them, Maria Lebedeva, according to eyewitnesses, showed interest in Streltsov. As everyone got increasingly drunk, the two were making out, but the situation purportedly became sinister as everyone went to sleep.

“Streltsov started dragging me to bed… We were fighting, I resisted as hard as I could, saying that I’d scream, but he was gagging me,” Lebedeva recalled later. She claimed that the drunken Streltsov raped her and then fell asleep.

The next day, Lebedeva filed a complaint with police, and Streltsov was arrested. Soviet leader Nikita Khrushchev was informed of the case, and is reported to have said: “Punish him harshly; behind bars for a long time.”

That’s what the court did, sentencing Streltsov to 12 years in a labor camp. Fans argued that the sensational forward was framed, that he and Lebedeva had consensual sex, and that she falsely accused him.

“They say the party was set up to disgrace him on the orders of Yekaterina Furtseva, the powerful Culture Minister close to Khrushchev,” journalist Kevin O’Flynn wrote in the Guardian. Apparently, Streltsov’s unruly character played against him: he had earlier insulted Furtseva’s daughter at a Kremlin ball.

Anatoly Nilin, Streltsov’s biographer friend, considers the sentence very but admits that Streltsov is to blame. “You can’t blame Furtseva, Khrushchev or Stalin if you’re unable to behave when drunk.” 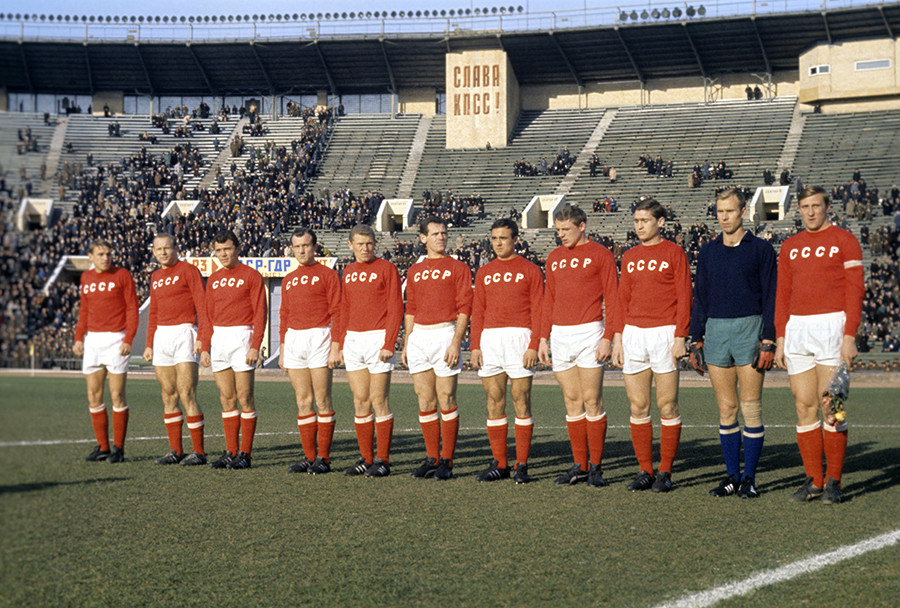 USSR national football team in 1966, Streltsov is second from the left,

Although his prison sentence was shortened to five years, time in the slammer was hard on Streltsov. During his first days behind he was beaten by and spent four months in the hospital.

He wrote to his mother: “Don’t blame yourself, it’s my fault only. You told me a thousand times that “friends,” “girls,” and vodka will bring me trouble. I didn’t listen to you – and here I am… I will be a different person when I go free.”

In 1963, he got out of prison and worked at the ZIL factory. Two years later, the new leader of the USSR, Leonid Brezhnev, rescinded the ban on him playing professional football, saying: “A plumber can work as a plumber after prison, why can’t a footballer play?” 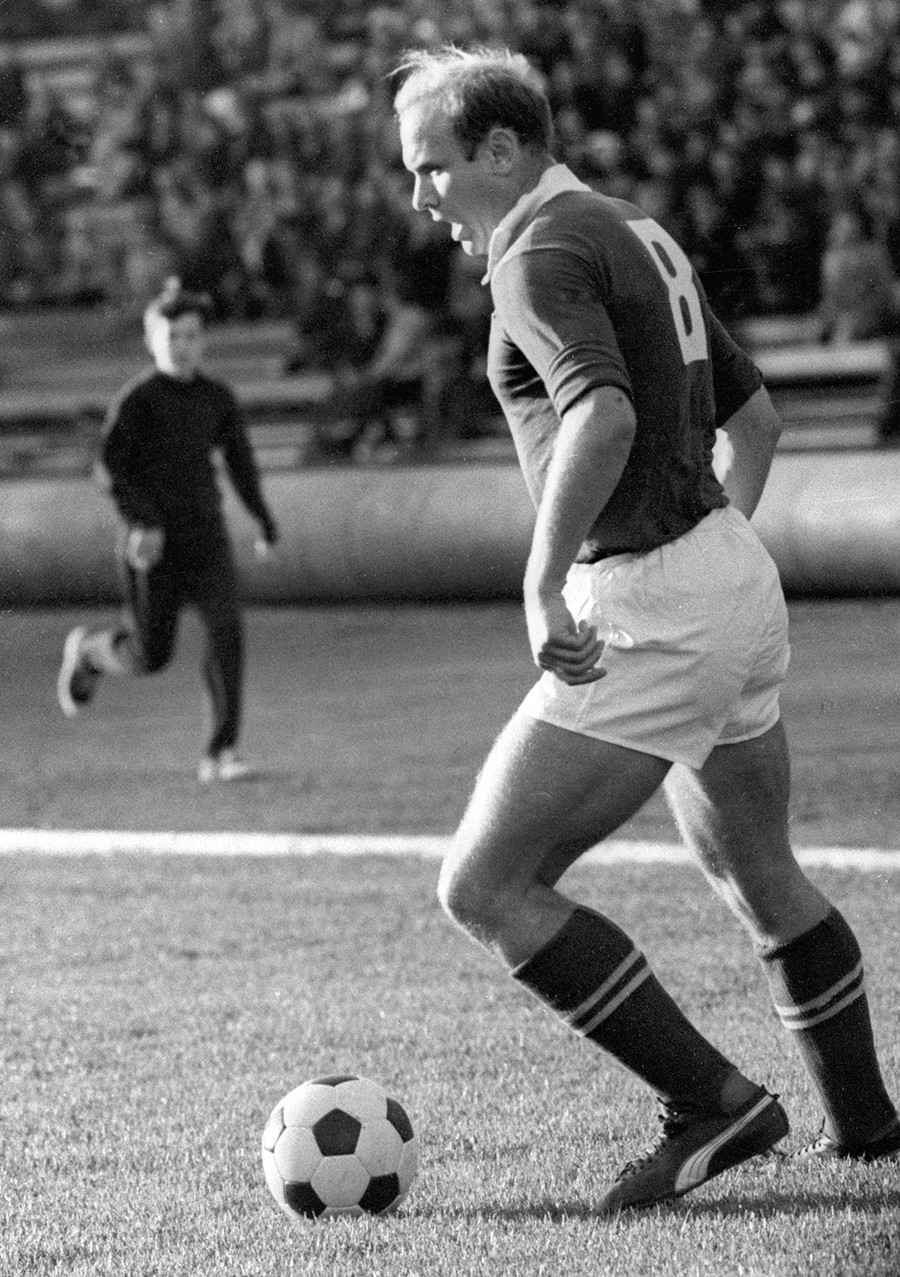 Eduard Streltsov back in the game, after his release from prison.

And so Streltsov returned to the field, playing again for Torpedo Moscow. As it turned out, he hadn't lost his skills during those idle years. Twice, in 1967 and 1968, he was recognized as the best footballer in the Soviet and played until 1970 for his club Torpedo. In 1990, he died from throat cancer.

Today, Eduard Streltsov is a legend, counted among the most talented Soviet players ever. But he could have achieved much more, if not for his recklessness. 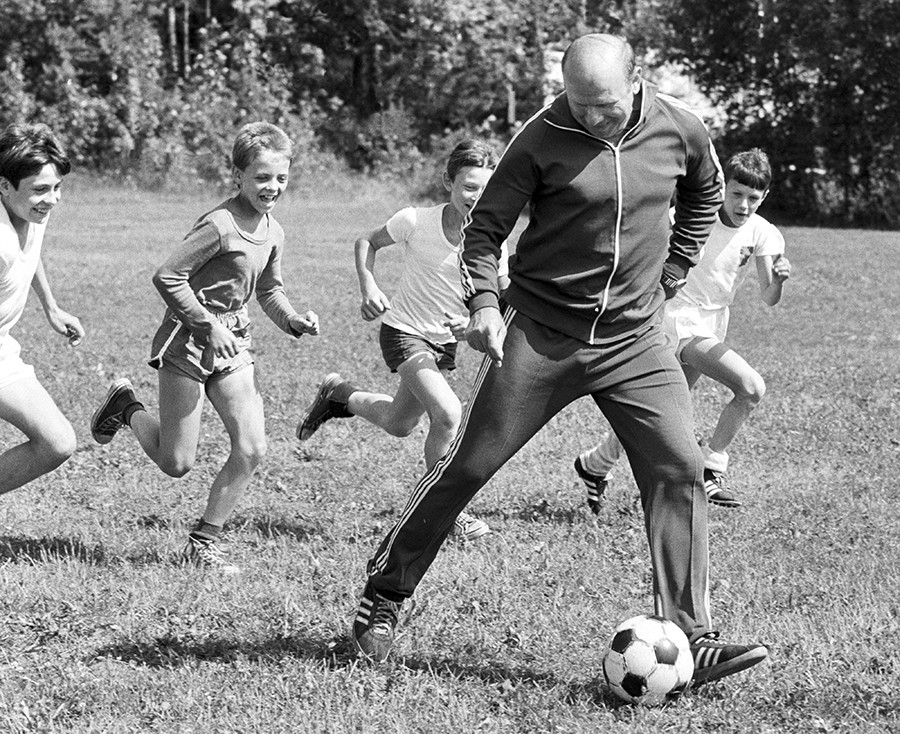 “On the football field, he was the strongest,” said his friend, Valentin Ivanov. “But in he was the weakest.”

The other big legend of the Soviet football - bigger than Streltsov, in fact - was Lev Yashin, the best goalkeeper in the history of the world, Here is an article about him.