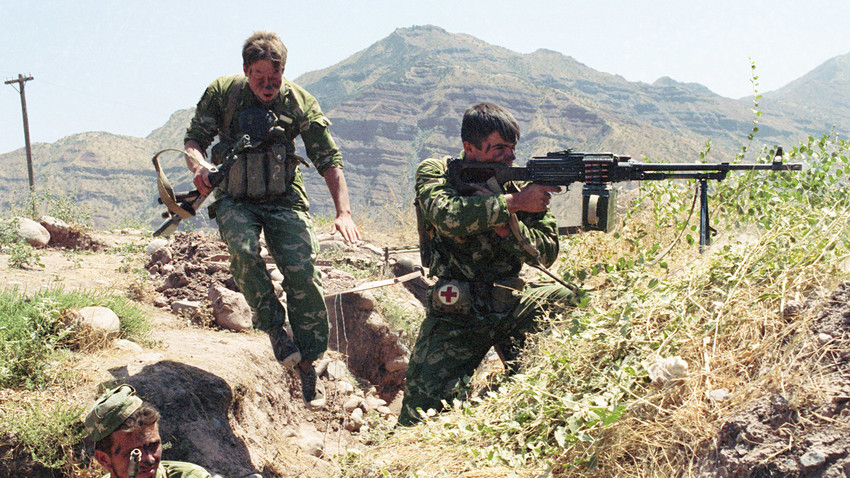 "Border post, right dress! Border post, ready! Eyes front! The surviving personnel of Border post No 12 are in front of you." These were the words with which Lieutenant Andrei Merzlikin greeted a belated reinforcement on July 13, 1993, 11 hours after the militant attack began. His unit miraculously survived under heavy shelling by the mujahideen.

Twenty-five years ago, Russian servicemen on the Tajik-Afghan border found themselves next to an epicenter of hostilities. Tajikistan was engulfed in a civil war, while the military-political situation was further aggravated by the overthrow of the Najibullah regime in neighboring Afghanistan. All of the people's troubles were blamed on Russia, and starting the spring of 1993, Tajik opposition fighters, with the support of Afghan mujahideen, repeatedly attempted to infiltrate the border.

Prior to the "Black Tuesday", none of the attacks were successful. But July 13, became one of the bloodiest days in the history of the border guard troops in peaceful time.

Merzlikin recalls that the day before the attack, the garrison headquarters command had issued strange orders that weakened the defense of the border post. For example, it ordered to remove so-called "secrets", firing points with guard details deployed outside the perimeter.

Still earlier, the militants had managed to study the base security system and to get a view of all the firing positions from the tops of nearby hills. "We saw everything, but we could not do anything - the commanding officers had said not to touch those people. Moreover, the Afghans sent their envoys, who made assurances that they would guard us," he says.

How the battle unfolded 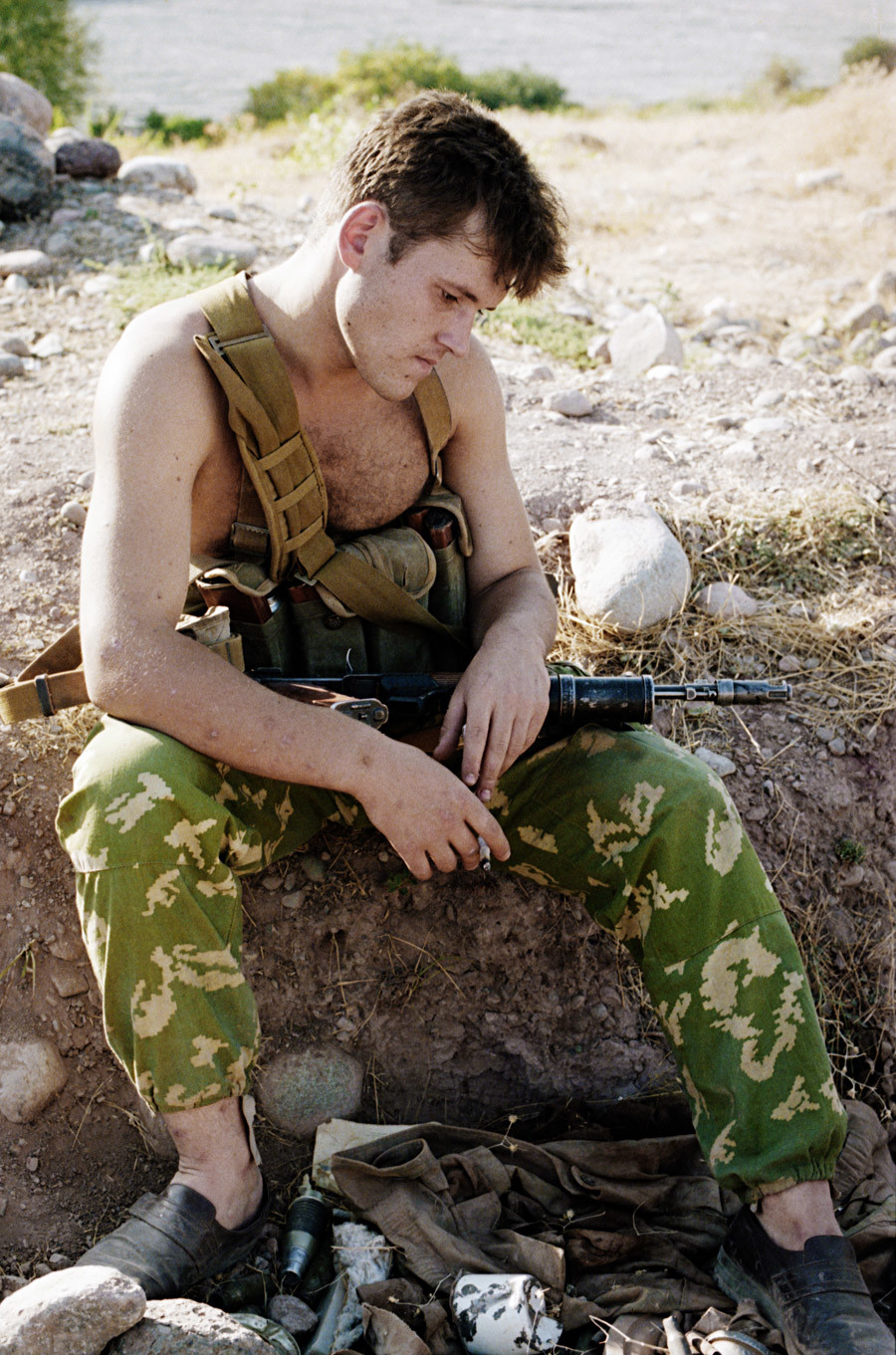 TAJIKISTAN. August 1, 1993. Frontier-soldier after a shootout at Tajik-Afghan border.

The attack began on July 13, at exactly 4 am. There were 47 border guards and one civilian at the border post. There was no military hardware - neither nor artillery. The soldiers had only one lightly armored infantry fighting vehicle, which was destroyed by a targeted strike in the very first minutes of the attack. Thus, all that the border guards had at their disposal were assault rifles, a couple of machine guns and an AGS-17 grenade launcher, which got jammed during the fight.

At the same time, the militants had mortars, machine guns, mounted grenade launchers, sniper rifles and all the tactical advantages one could wish for - an element of surprise, dominant positions and numerical advantage. On that day, the Russian servicemen were attacked by a detachment of up to 250 militants.

The militants had all the exits from the barracks within their range, so the soldiers had to knock out the windows and jump out of them in the opposite direction, out of the range of enemy fire. One of the border guards, Sergeant Yevlanov, recollects how, together with another soldier, they managed to reach a strong point and establish perimeter defense. However, soon a grenade hit the strong point and he was thrown out of it by an explosive wave. Miraculously, the young man was not killed and on a sheer adrenaline rush managed to get to the shelter. It was only then that he noticed that he had been wounded.

In the meantime, one of the border guards managed to send a distress signal to the headquarters.

Several hours later the subsided, and the skirmish moved into a protracted phase with the opposing sides exchanging individual shots. The border guards were quickly running out of ammunition.

A few desperate attempts to get from the trench to the ammunition depot did not succeed. Private Dodokalonov rushed to the officers' barracks, which were on fire but where there was a box with machine gun cartridges hidden under a bed. "When he made a dash there, everybody thought he was a goner: the militants were firing at the building from all they've got, - Merzlikin recalls. - Several guys were killed before my eyes. And then suddenly Dodik emerged with a box with 200 rounds. If it had not been for him, we would have definitely not made it. We distributed the cartridges evenly. Later, when we were already out of there, I counted: we each had seven cartridges."

And yet, the commander was in no rush to retreat, even when there was no ammunition left - the SOS signal had been sent a few hours ago and the reinforcements should be on their way. So how could they abandon the border post?!

That delay would later lead to a high-profile resignation of the then commander of the Russian Border Guard Troops and a reshuffle and several dismissals in the Defense Ministry. But all that would be later, while now a group of Russian servicemen had spent several hours surrounded and under heavy fire.

Help from the air arrived only seven hours later, by 11 am. Two gunships appeared in the sky and delivered a massive rocket strike at the militants' positions in the mountains. However, the pilots did not dare to land to pick up the people: several months earlier in that the militants had shot down a low-flying aircraft from a MANPAD.

It was only after seeing that the helicopters had left and all the ammunition had been spent that the border post commander made the decision to retreat, taking advantage of a turmoil in the mujahideen ranks caused by the appearance of the helicopters.

The last remaining border guards headed towards the nearby village of Sari-Gor. Merzlikin believed it was from this direction that reinforcements should be arriving. Despite the help from the air and the turmoil in the militants' ranks, they were still followed by enemy fire.

After a while, the border guards came across their fellow servicemen from neighboring border post No 13. The detachment was commanded by Lieutenant-Colonel Vasily Masyuk, who was bringing tanks and heavy artillery, which had been so badly needed by the besieged border guards. However, the help was not able to arrive on time because the only "direct" route to the 12th border post had been mined by the mujahideen and was under fire from militants hiding in the mountains.

That very same evening the rescue team returned to the border post captured by the militants and razed it to the ground with a heavy artillery barrage. The militants had to beat a hasty retreat to the mountains 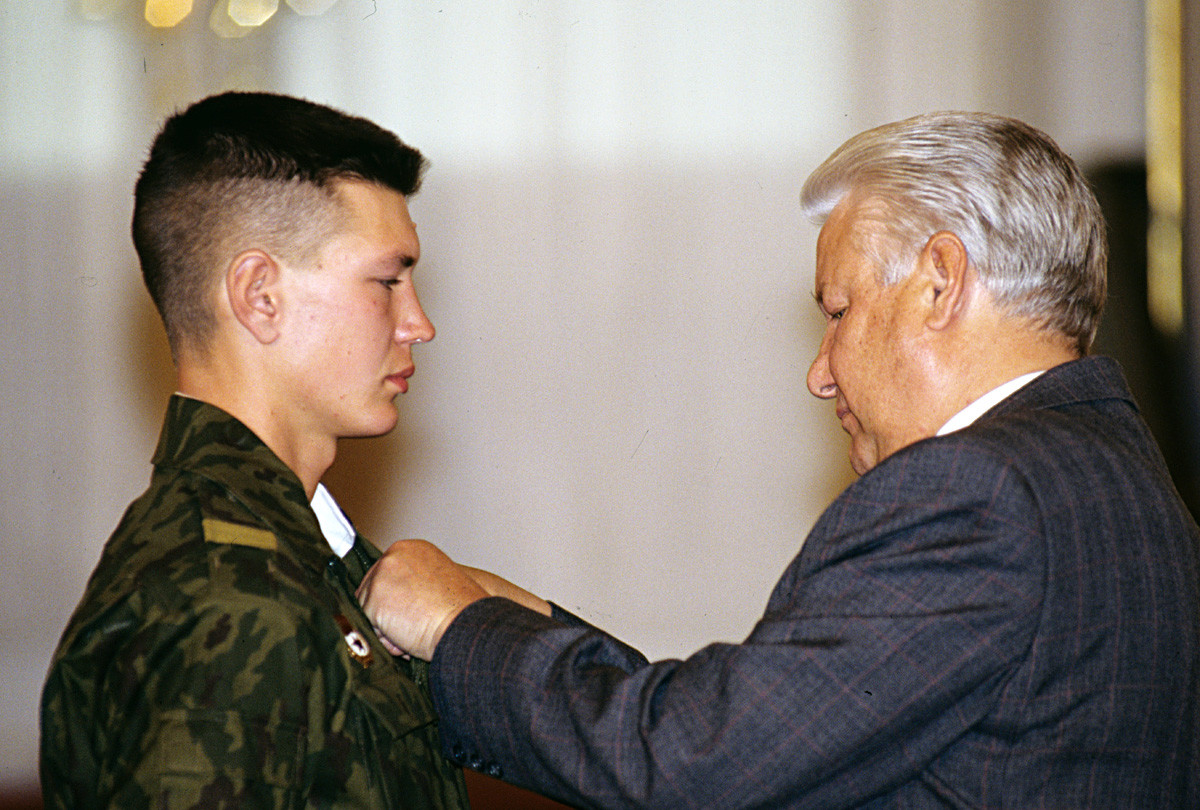 President Boris Yeltsin presenting the Order for Personal Courage to border troops private Vladimir Evgenyev for showing courage and heroism in performing the military duty at the Tajik-Afghan border.

militant attack claimed the lives of 25 Russian soldiers. The mujahideen lost about 70 people. Lieutenant Merzlikin, who had managed to lead his men from under enemy fire, was awarded the title of a Hero of Russia and rose to the rank of a major-general in the FSB. He is now in reserve and serves as an adviser to the chairman of the Russian Union of Martial Arts.